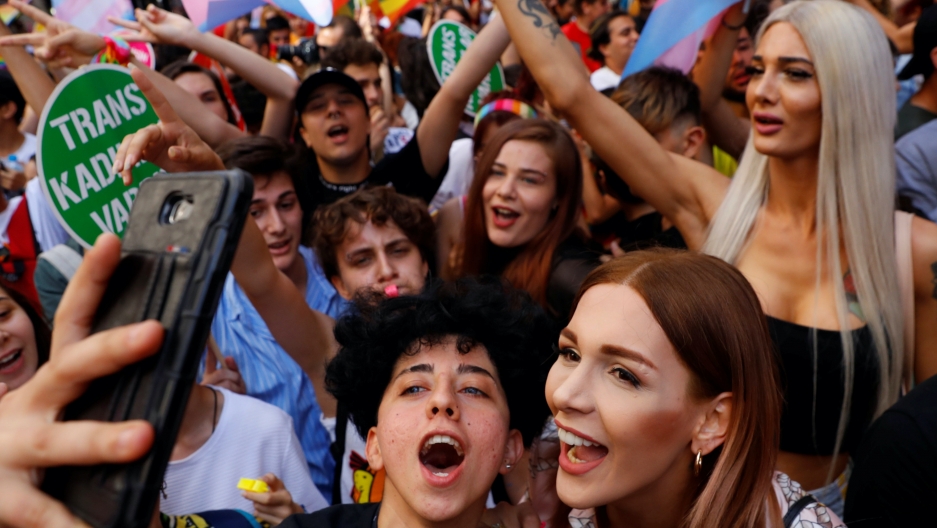 LGBTQ rights activists gather to try to march for a pride parade, which was banned by the governorship, in central Istanbul, Turkey, June 30, 2019.

LGBTQ bars have been steadily disappearing for decades. In the 1980s, there were more than 1,500 LGBTQ bars in the US; now, there are less than 1,000. For bars catering to queer women, the plunge has been even steeper, with the number dropping from more than 200 lesbian bars in the 80s to just 15 today.

It’s not just in the US. Queer nightlife is shrinking around the world — from the UK to Turkey, and beyond — and now the coronavirus pandemic threatens to shutter even more queer nightlife spaces.

Related: Lesbians in Senegal are left out of the gay rights movement

In the US, those 15 remaining bars continue to provide important and liberating experiences. Erica Rose, a queer filmmaker in New York, remembers the first time she walked into the legendary Manhattan bar, Cubbyhole.

“I like to say that Cubbyhole knew I was gay before I even did."

“I like to say that Cubbyhole knew I was gay before I even did,” Rose said. Cubbyhole, which is as small as its name suggests, opened in 1994 and since then has been a safe space for queer women, transgender women, and nonbinary people.

On Rose’s first visit, she was hooked.

“It was the first time I had seen queer women not only just being romantic with each other but being themselves in such an immediate and tangible way,” she said. “It was a wake-up call and rang the alarms in my head, like, ‘Oh, this is who you are.’ And I felt at home there.”

Fellow filmmaker Elina Street shares that sentiment. Originally from France, Street had never heard of a lesbian bar before moving from Paris to New York six years ago.

“I like to say I walked straight from the closet into Cubbyhole,” Street said. “And the rest is history.”

Rose and Street are dear friends now and both feel steeped in New York City’s queer culture. But even they were surprised to hear that there are just 15 bars for queer women across the country. They decided to take action.

“We knew we couldn’t just sit by idly and watch our favorite spots disappear,” Rose said.

Rose and Street have teamed up to direct the Lesbian Bar Project. They’re raising money to celebrate and preserve the country’s 15 remaining lesbian bars, which they define as spaces for all marginalized genders within the LGBTQ community, including cisgender queer women, transgender queer women, nonbinary folks, and transgender men. People can donate to the month-long campaign through Nov. 25.

But the project is about more than fundraising.

“These are spaces that are more than bars. They’re landmarks. There’s a lot of intergenerational dialogue that takes place in there."

“These are spaces that are more than bars. They’re landmarks. There’s a lot of intergenerational dialogue that takes place in there,” Street said. “And so the reason why we really wanted this campaign to take place is to elevate the voices of the bars, before anything else.”

Street and Rose elevated those voices in a video narrated by queer icon and the project’s executive producer, Lea Delaria, who is credited with being the first openly gay comic to appear on American TV with her 1993 appearance on “The Arsenio Hall Show.” Delaria also played Caroline "Carrie" “Big Boo” Black in the Netflix hit series “Orange Is the New Black.” But in the Lesbian Bar Project’s PSA, Delaria recalls her own experiences in lesbian bars and pays tribute to those who have closed down.

“I remember being excited for the weekend. It was my playground. My family. I remember the lost spaces,” Delaria says, as images of several now-shuttered lesbian bars flash across the screen. The PSA plays as an obituary to the bars where queer people gathered and formed their identities for decades.

Then, Delaria offers a message of hope.

“I remember that Pride began as a riot,” she proclaims. “That our community is getting stronger and more vocal every day. And that we, too, can protect a safe space.”

These safe spaces need protection around the world.

Lo Marshall, a research fellow at the Bartlett School of Architecture and University College London's Urban Laboratory, studies queer nightlife in London with professor Ben Campkin. In London, since 2006, 58% of LGBTQ venues have closed down.

Similar to the US, bars for gay men have fared better than those for other members of the LGBTQ community; Marshall says just one full-time lesbian bar still operates in London.

But nailing down the reason for these closures can be tough. To start, non-male entrepreneurs get a tiny fraction of the investment money men do, so it is harder to open doors in the first place. Plus, according to a study in the UK, queer people get paid 16% less than cisgender, straight people. That means LGBTQ people may have less disposable income to spend on a night out.

Then there are the dating apps: queer adults are twice as likely as straight adults to use them, and therefore might not rely on going to bars to meet someone.

But Marshall says their research on queer nightlife points to something bigger.

“LGBTQ venues have occupied space that nobody else wanted to occupy. ... [This is] partly about accessibility. Partly, historically, because of stigma. And those kinds of spaces have gone on to be regenerated or become gentrified.”

“LGBTQ venues have occupied space that nobody else wanted to occupy,” Marshall said. “[This is] partly about accessibility. Partly, historically, because of stigma. And those kinds of spaces have gone on to be regenerated or become gentrified.”

During the pandemic, LGBTQ bars in London have received extra help from the government. In September, Mayor Sadiq Kahn announced £225,000 or about $300,000 of emergency funding to help with short-term rent, staffing and supplier costs. Marshall says it’s a good step, but the money doesn’t go as far as one might think.

In other parts of the world, though, government funding for LGBTQ venues is not a possibility. Adar Bozbay opened Bigudi, a queer bar in Istanbul, Turkey, in 2008, after growing tired of facing harassment and judgemental looks in gay bars catering to men.

For 10 years, Bigudi was the country’s only bar for queer women. But Bozbay says it was hard to keep it open. Police bothered her bar more than anyone else. And although Bozbay often had a packed house, sometimes Bigudi didn’t bring in enough money. A few years ago, Bozbay decided to open the bar up to the wider LGBTQ community. Since then, she said she has faced a bit of backlash from the original patrons.

Bozbay said she did start making more money after opening Bigudi to all LGBTQ people. But the bar has been closed since March, and Bozbay is nervous about its future.

“I don’t know how long we will stay open,” she said.

The absence of those spaces will be felt particularly hard during the holidays. Queer bars are known to stay open for those who aren’t welcome at family gatherings.

Street and Rose of the Lesbian Bar Project say these bars are more than a spot to grab a drink. They’re landmarks. They’re shelters. For many, they’re home.