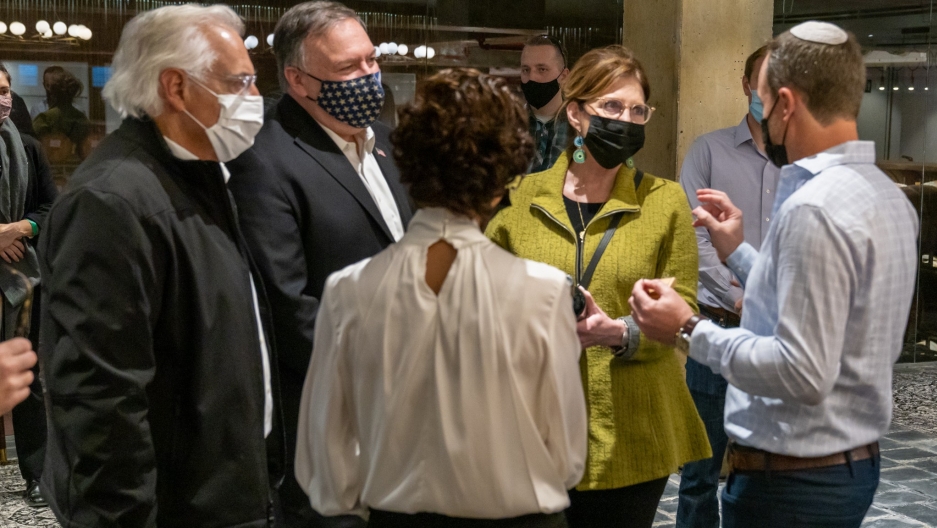 In this photo posted on US Secretary of State's Twitter account, Mike Pompeo, center, and the US ambassador to Israel, David Friedman, left, meet with the managers of the Psagot winery in the West Bank.

America’s top diplomat Mike Pompeo made history Thursday by becoming the first US secretary of state to visit an Israeli settlement in the occupied West Bank, the entirety of which Palestinians claim as a part of their future state.

The visit is widely seen as Pompeo's last play to the Republicans’ evangelical Christian base as the most pro-settler administration in history nears its end.

Meanwhile, Pompeo looks ahead to a possible presidential run in 2024. And in Israel, it is seen as a parting gift to the country's right-wing government and the settler community in the West Bank, a contested region that was captured from Jordan in the 1967 war. 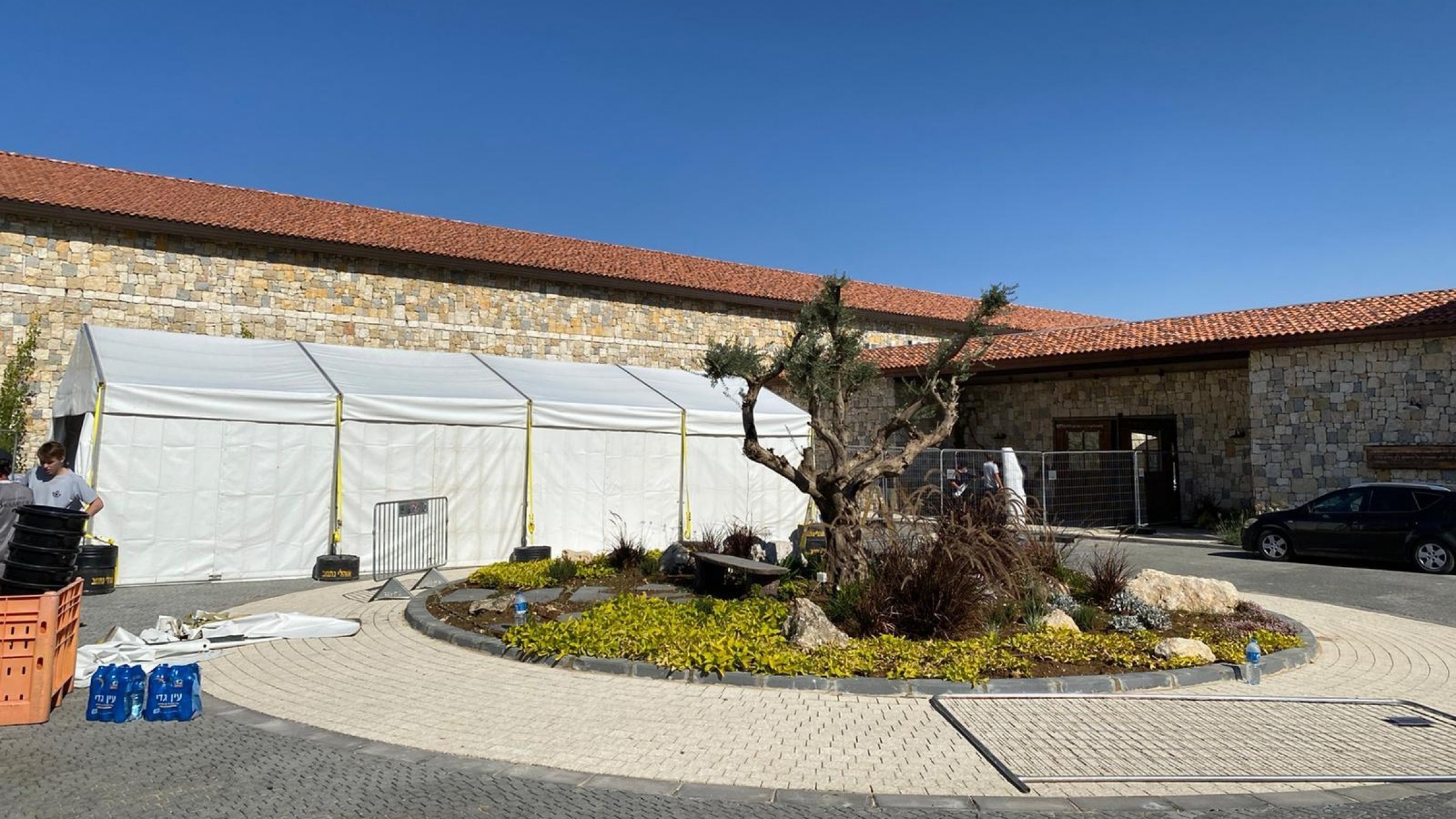 Psagot Winery makes preparations for the visit by US Secretary of State Mike Pompeo, Nov. 18, 2020.

During his journey to Israel, Pompeo visited the Psagot Winery, located in an industrial zone 7 miles away from the settlement with the same name. There is a lot of political disagreement over the rocky hills that surround the winery, but most people who visit all agree that it is a beautiful place.

The winery is partly owned by the wealthy Falic family from Florida. They generously support Israeli settlements and various US politicians, including outgoing President Donald Trump. Earlier this year, the winery honored Pompeo, naming a vintage after him. Pompeo wine, as it's been dubbed, is a blend of cabernet, shiraz and merlot. That appellation came after Pompeo reversed long-standing US policy by declaring that West Bank settlements are not illegal.

“The Trump administration is reversing the Obama administration’s approach towards Israeli settlements,” Pompeo said last November. “US public statements on settlement activities in the West Bank have been inconsistent over decades.”

‘Come to visit us’

But the Trump administration shifted away from that conclusion, claiming that the legality of each settlement should be judged separately and that as a whole, they are not an obstacle to the creation of a Palestinian state.

“The hard truth is there will never be a judicial resolution to the conflict, and arguments about who was right and wrong as a matter of international law, will not bring peace,” Pompeo continued, one year ago. “This is a complex political problem that can only be solved by negotiations between the Israelis and the Palestinians.”

But Pompeo certainly isn’t visiting the Palestinians this week.

About 10 minutes to the northeast by car from the winery is the Palestinian village of Taybeh, where the Khouri family is in the middle of brewing day. The Khouris own the Taybeh Brewing Company, which prides itself as being the first microbrewery in the Middle East. They export their beer to 15 countries, including the United States. 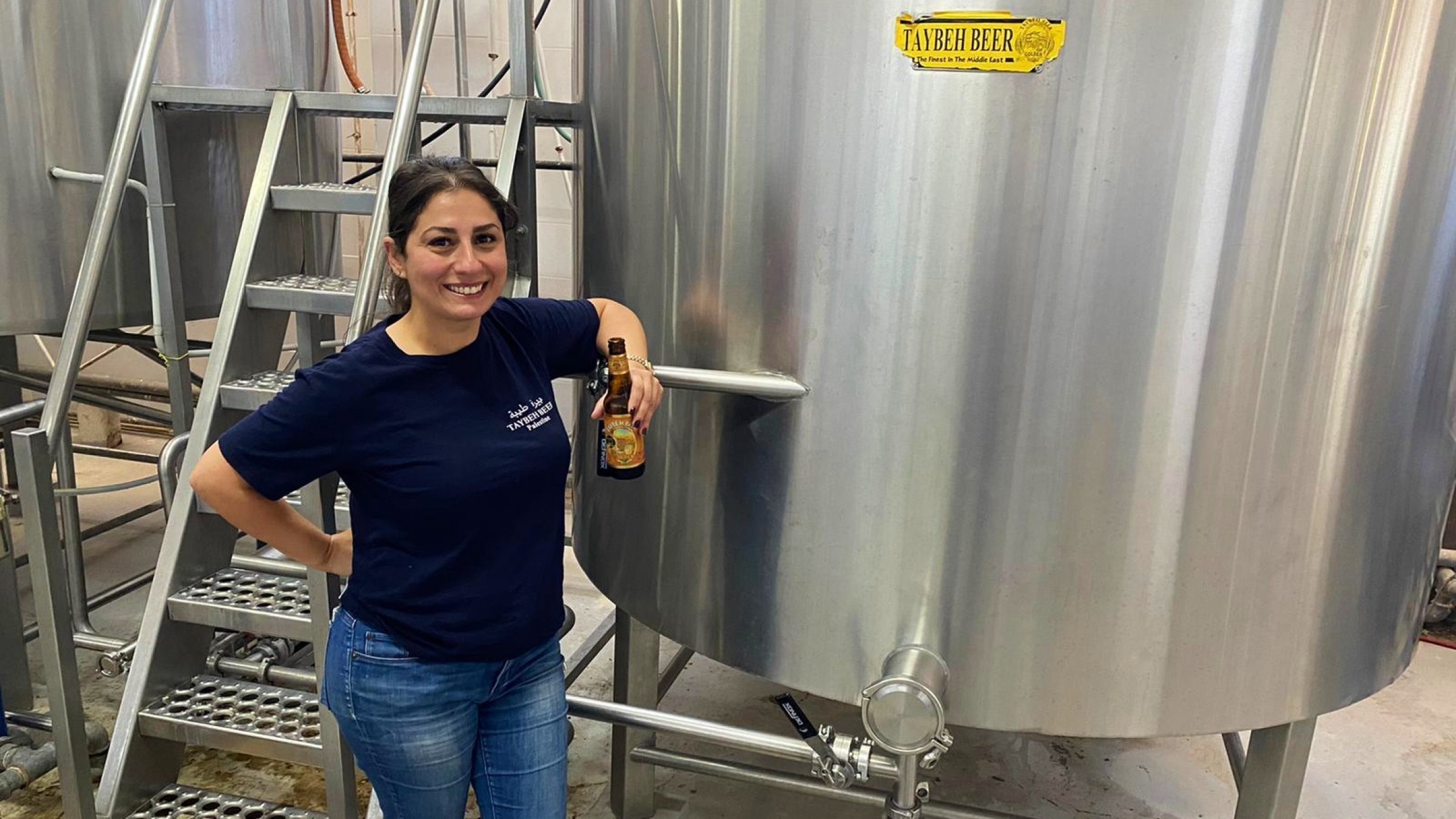 Madis Khouri holds out hope for when the pandemic ends and American diplomats buy more beer from her family's brewery.

“He should have come to visit us, to tell you the truth,” said 22-year-old Madis Khouri.

In 1994, her grandfather and uncle established the brewery with her father, who learned how to brew beer at his college dorm in Boston. That was after the Oslo peace accords were signed between Israel and the Palestinians.

Madis Khouri says she was surprised Pompeo didn’t consider visiting their brewery, especially given that American diplomats used to visit this place all the time.

“I’m sure he’s heard of Taybeh because the American Consulate always has Taybeh beer at the 4th of July event that they do in Jerusalem,” Madis Khouri said, referring to the diplomatic facility that turned into the new US Embassy.

“This year, they didn’t have one obviously because of COVID[-19], but they’re big supporters, the employees. And they come and visit me in the brewery on Saturdays, they stock up on beer.”

The coronavirus pandemic hit the Taybeh brewery hard. Since March, the business saw a 70% drop in business. But Nadim Khouri, Madis Khouri's father, says they’re used to dealing with adversity.

“Making beer in Palestine is not like making beer anywhere in the world,” Nadim Khouri said, describing “the obstacles, the siege, the closures, the occupation, the wall, and now with the recent pandemic.”

"We will continue to fight for our freedom and we will toast the freedom with Taybeh beer."

The visit by Mike Pompeo could be his last as secretary of state. Critics say it’s been a mistake for the administration to sideline the Palestinians. But when asked how he feels about Pompeo’s visit to the winery, Nadim Khouri is diplomatic with his answer.

“Politics and beer don’t mix together,” he said. “But we will continue to fight for our freedom and we will toast the freedom with Taybeh beer.”

Madis Khouri, on the other hand, says she’s disappointed that the secretary of state visited an Israeli settlement. But she says it’s not all that surprising given the Trump administration’s track record.

“It’s very sad to see that the US is not fully supporting the Palestinians and not encouraging them,” she said. “You know, not helping to make peace in Palestine.”

But Madis Khouri says she’s not overly concerned about the visit because it’s really more symbolic than anything else.

Earlier this week, Palestinian Prime Minister Mohammad Shtayyeh condemned the expected visit, calling it a “dangerous precedent.” And for the prior two days, dozens of Palestinians protested near Psagot against Pompeo’s arrival.

Oded Eran, a former Israeli ambassador to Jordan, dismisses the importance of the visit.

“It’s largely ceremonial in the sense that this is a departing Secretary of State,” Eran said. “It’s nice that the settlers have decided to honor Pompeo but it’s nothing more than that.”

Eran, who served as chief peace negotiator with the Palestinians during the Clinton administration, agrees that while Pompeo’s settlement tour is controversial, it’s unlikely to have a big impact on the next US administration and its approach to the Israeli-Palestinian conflict.

“I’m more than doubtful that this will be of any political significance in the relations between Israel and the Palestinians or Israel and the United States,” Eran said.

Eran added the trilateral relationship took a big hit under the Trump administration. Earlier this year, the Palestinian Authority cut ties with Israel and the US amid talk of West Bank annexation. Palestinian leaders say Trump has heavily favored Israel’s right-wing government and ignored their concerns.

Related: Former US ambassador says Israel would be 'making itself an international outlaw' with West Bank annexation

But in a surprising move, Palestinian President Mahmoud Abbas announced Tuesday that the Palestinian Authority will resume security cooperation with Israel. That could be a first step toward something different, part of a larger nod to the new American president beginning his term in January.

And as Pompeo on Thursday became the first secretary of state to visit the Golan Heights, senior Palestinian officials indicated progress on two previously vexing issues: the transfer of critical tax revenues and the reform of controversial stipends to security prisoners held by Israel.