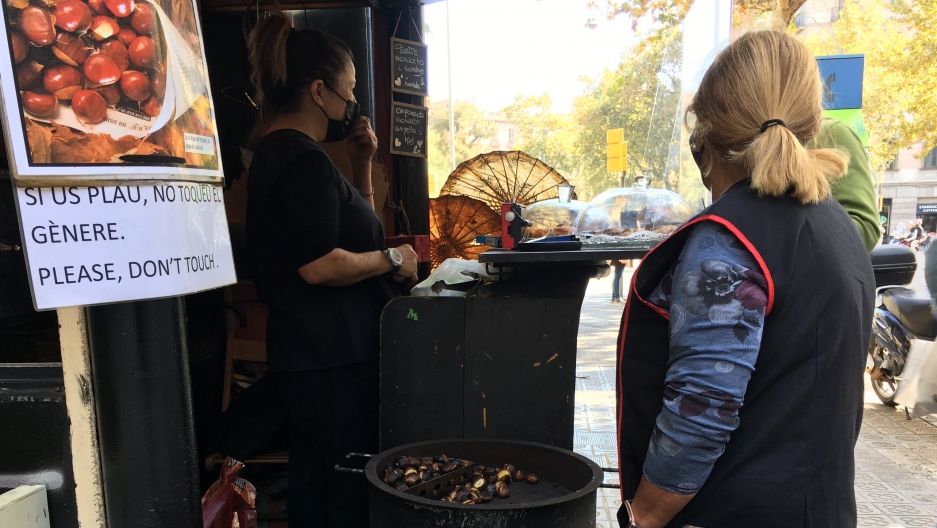 From October to February, Catia Guitián (left) can be found selling roasted chestnuts in downtown Barcelona.

From October to February, Catia Guitián can be found selling roasted chestnuts in downtown Barcelona.

She sets up in a small wooden kiosk and cooks chestnuts on a big, round iron roasting pit; she serves them warm, wrapped in newspaper. The snack is very popular this time of year and forms part of a centuries-old Catalan tradition called la Castanyada, or “chestnut feast,” when people gather for a big celebration on Oct. 31.

“This year is a bit of a lost cause,” says Guitián, one of the few street sellers that actually opened amid the coronavirus pandemic. “Usually, October is our busiest month, but sales are lower than ever before.” Chestnut sellers are also beginning to feel edged out by the commercialization of the American holiday Halloween, which falls on the same day.

Guitián comes from a long line of chestnut sellers. Her mother worked at her same stand since the 1970s, and before her, another relative held the reins. But the trade dates back even further. Peasant women from the countryside called castanyeras would come into the big city and sell roasted chestnuts as early as the 1800s. They typically wore scarves over their heads and long skirts and set up on wooden stools with a roasting pit. Now, the image of that historical figure has turned into the symbol of la Castanyada.

“Castanyada is in fact the secularization of the tradition of All Saints' [Day]."

“Castanyada is in fact the secularization of the tradition of All Saints’ [Day],” says Dani Cortijo, a local historian who specializes in popular culture.

He says the tradition likely comes from when Catalans would stay up all night before going to the cemeteries to pay respect to their ancestors on Nov. 1. They would keep a fire to stay warm and eat seasonal foods like chestnuts. The holiday may also have some roots in harvest festivals.

Today, Castanyada is mostly just a feast, often celebrated in the countryside with bonfires. The tradition of visiting cemeteries the following day has been lost, for the most part. At a typical Castanyada celebration, the must-have foods are roasted chestnuts, baked sweet potatoes and a sugary almond pastry called panellets.

But for the past two decades, thanks in part to the increasing influence of American cinema and TV, locals have begun to celebrate Halloween, too. Stores have stopped decorating with chestnuts and cartoon images of castanyeras. Instead, they turn to skulls, pumpkins and witches.

“For children and for teenagers, it’s more attractive, Halloween, than the local tradition, because it’s not the same thing,” Cortijo says.

Cortijo says it’s impossible to compete: one is essentially a costume party while the other is a family gathering. He worries that, for this reason, Castanyada could eventually be lost to history. But he doesn’t think pushing away the American holiday will do any good. Instead, he wants there to be more of an effort to preserve the Catalan one, especially in public institutions like schools.

“I think they can coexist and they will coexist because I prefer to have different traditions, not only one tradition in all the world. ... They exist, some words, like Castaloween or Halloweenada, like a mixture of Castanyada and Halloween.”

“I think they can coexist and they will coexist because I prefer to have different traditions, not only one tradition in all the world,” Cortijo says. “They exist, some words, like Castaloween or Halloweenada, like a mixture of Castanyada and Halloween.”

But one little girl tells me she also likes la Castanyada.

Switching between Spanish and Catalan, she says that at school they celebrate by drawing pictures of chestnuts and coloring them. It may not be candy, she says, but chestnuts are tasty, too.