This week, Kolkata braces for its biggest annual festival celebrating Durga, the Hindu goddess of war and strength, even as COVID-19 cases continue to rise in the state of West Bengal. Over 4,000 new COVID-19 cases were recently logged in one day — an all-time high —  pushing the state's total case count to almost 330,000.

Durga Puja, a five-day festival, begins Oct. 22, when millions hit the streets all day and night, visiting temporary pop-up temples known as a pandal to honor the 10-armed goddess and her family all over the city.

Related: Artists flock to the only 'festival' still on during COVID-19

It’s often called the world’s largest community-driven event. The city boasts over 1,200 public pujas, or sites where the Durga idol is worshipped, in different neighborhoods. Including pujas in private homes, that number goes up to well over 2,000. But this year, due to the pandemic, the city must reimagine its biggest festival.

Worship rituals will change significantly this year. Devotees typically throng the pandal, tossing flower petals at the goddess, while drums beat, incense smoke billows, bells ring and platters of cut fruits are offered. But this year, Kolkata resident Malavika Banerjee says they are not serving cut fruit to the deity and plan to reduce the number of garlands that devotees drape around the family’s 110-year-old Durga idol, to encourage physical distancing. Banerjee also says that due to the pandemic, “we are discouraging 65-plus members of the family from coming.”

The same is true for Chandreyee Chatterjee, whose extended family usually descends upon their old family home in Kolkata to celebrate Durga Puja. But this time, they drew up a strict schedule for family members. Chatterjee says they are “dividing up the number of days we come so that there are not more than five or six people [at home] at the same time.”

Usually, the whole family pitches in to pay for the festivities. But she says months of pandemic lockdown have hit pocketbooks hard. “Not everyone has money to spare,” says Chatterjee. So, family members are just asked to contribute whatever they can.

They’ve eliminated big lunches, cut down on the number of priests who come into their home to perform the rituals, and the family’s Durga idol is half the usual size and cost. 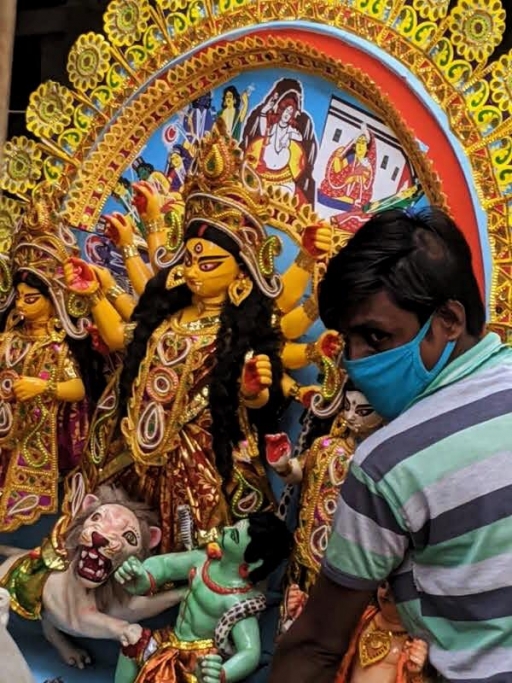 This is true for many Durga pujas across the city: the ritual worship is happening, but it’s been shrunk in scope and size. And practices will be very different this year, with temperature guns, hand sanitizer mandates and a strict no-mask, no-goddess policy indoors.

Also, the Calcutta high court has just ruled that no visitors will be allowed inside the pandals — only selected organizers and priests can enter.

Jaydeep Mukherjee promotes Durga Puja as a cultural attraction through his foundation, Meghdutam. Usually, he invites international journalists and bloggers to come to Kolkata to judge their annual Durga Puja competition with categories like “best soulful creation” and “exquisite idol.” This year, the international judges can’t come due to pandemic-related travel restrictions. So, he is taking Durga Puja to them virtually.

“We’re going to move to different pandals, take these small videos, share [the videos] with them, and we are going to do this award ceremony virtually,” Mukherjee says.

Festival goers typically wait in line for hours to take selfies at the big pandals, which compete with each other to attract the most visitors. There have been Hogwarts pandals, Thai-style temples and pandals made out of biscuits.

This time, the pandemic is weighing heavily on worshippers’ minds: Durga always appears astride a lion slaying Mahisasura, the buffalo demon.  “The demon, this time, is the corona[virus],” says Mukherjee, showing a slew of pictures that children have drawn at a recent sit-and-draw competition, most depicting the goddess slaying a green spiky coronavirus-esque blob. 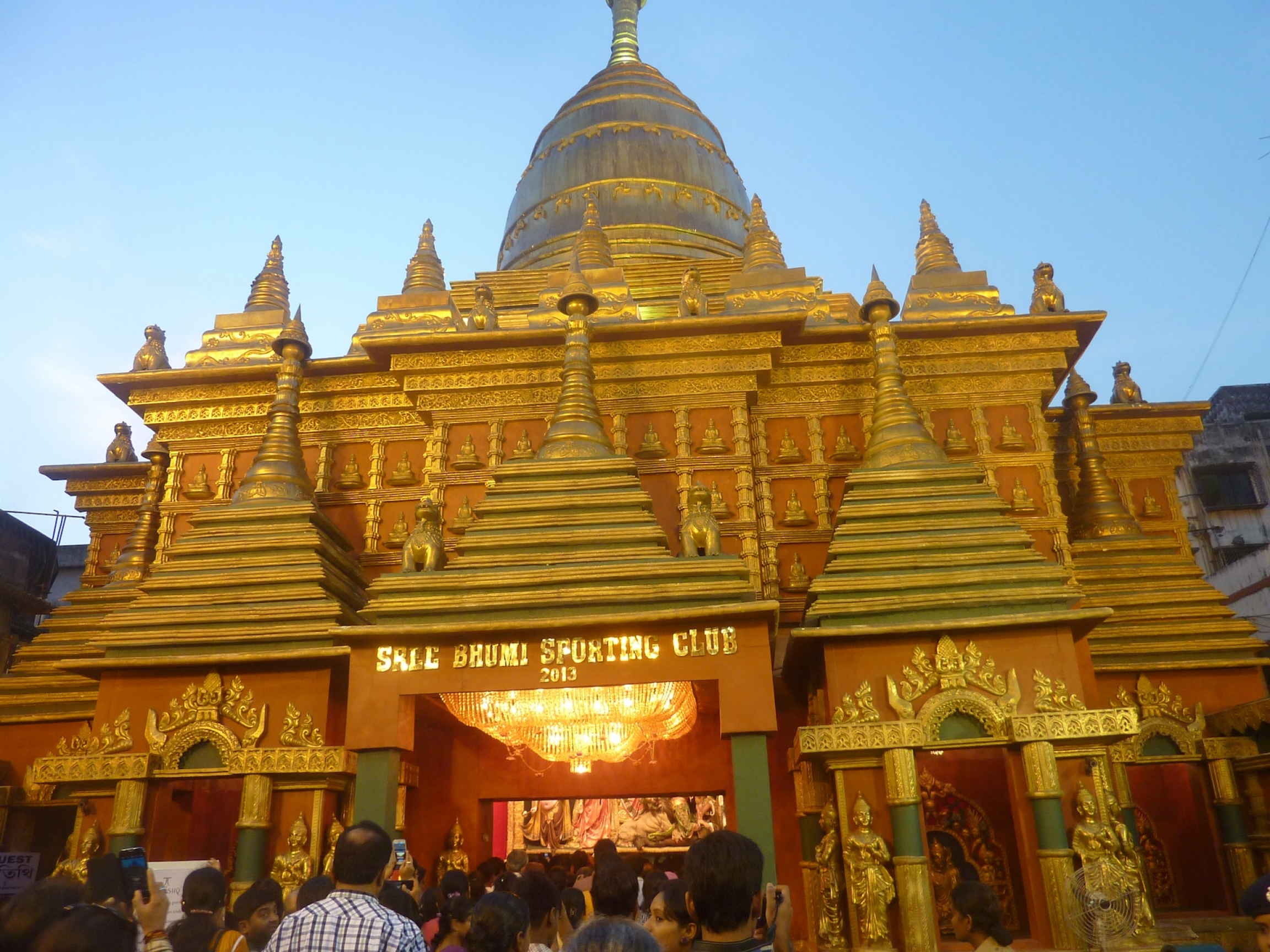 Durga Puja pandal in the shape of a Thai temple, Kolkata, India, 2017.

One pandal is shaped like lungs, and some Durga idols are dressed in hospital scrubs. 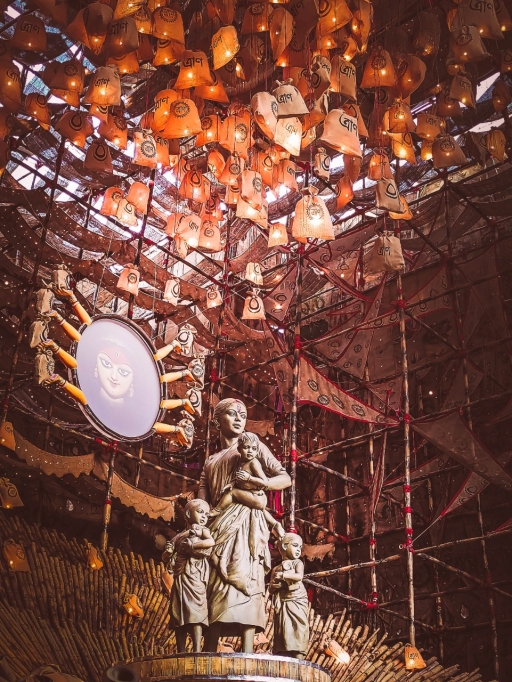 The tragedy of migrants families during the pandemic lockdown finds expression in a Durga Puja, Kolkata, India, 2020.

Durga Puja theme designer Rintu Das was moved this year by the heartwrenching images of thousands of migrant laborers he saw on TV earlier this year, who were trudging home on foot across India, when trains stopped running because of the lockdown. Instead of a goddess and her children in resplendent finery, his Durga idol is a migrant woman with her family, made from simple clay. He says he wants this to be a “people’s puja” because “...serving humanity [is] a way to serve God.”

Theme designer Anirban Pandalwala also designed his temple with the pandemic in mind: His temple has a broken wall so that passerby can view the goddess Durga from the street without needing to step inside.

And most Durga Puja organizers are streaming live on the internet so you can watch the fanfare from home, says Pandawala.

Durga Puja is not just a religious festival and street art extravaganza — it’s also an economic lifeline for tens of thousands of carpenters, electricians, priests, food vendors, painters, and musicians.  “It might be revelry for some, but it’s livelihood for us,” says Anirban Pandalwala, who reckons that 30% of the state’s gross domestic product is somehow linked to this mother of all festivals.

While there had been talk of canceling Durga Puja this year, it feels like faith in a goddess who vanquishes evil is more important than ever at this time.

Mukherjee, whose foundation works with children in nearby villages devastated by the lockdown, organized opportunities to celebrate the goddess. In one village, they created a miniature Durga idol, barely a foot and a half tall. In another village, children made tiny lamps out of white cork; another group made a bamboo temple. Mukherjee put all of their creations on display in a Kolkatta alleyway in a unique tableau. In a sign of the times, it was inaugurated by a little boy in a mask who spritzed the idol with some sanitizer. 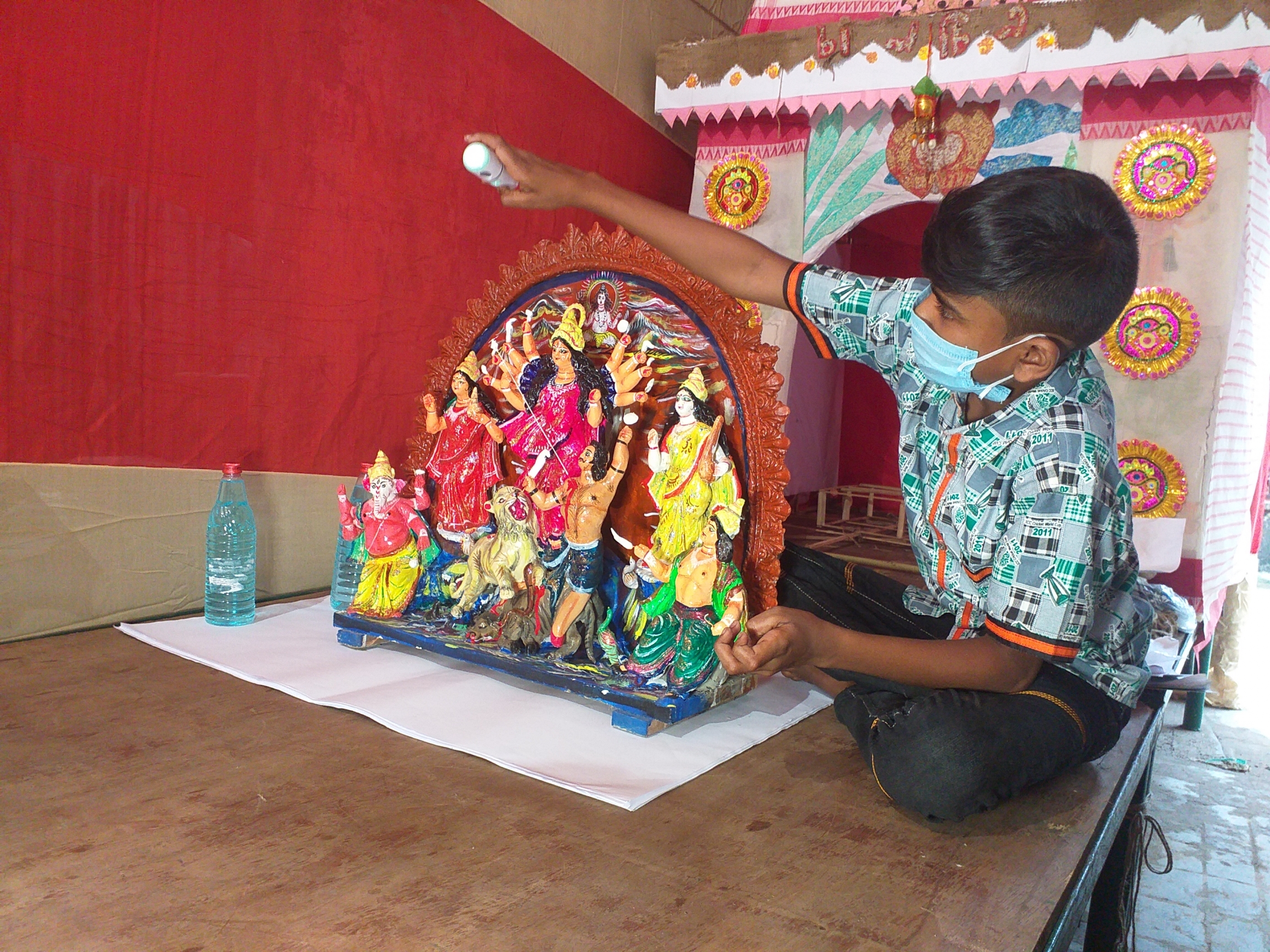 This humble display of Durga Puja sends a message that perhaps what really matters most during a pandemic is community coming together.