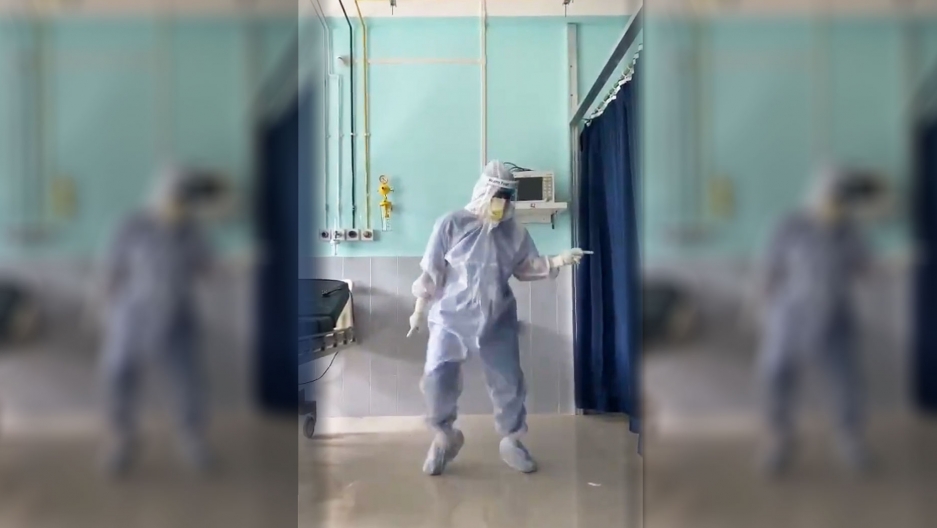 Dr. Arup Senapati, an surgeon at Silchar Medical College in northeastern India dances to the hit song “Ghungroo” for his COVID-19 patients.

Imagine ending up in the hospital with COVID-19. You're sick in bed, and you're scared. A doctor comes in wearing full protective gear — face shield, mask, medical gown, the whole nine yards.

Then something unexpected happens: he busts a move.

Dr. Arup Senapati, an otolaryngologist — or ear, nose and throat (ENT) surgeon — at Silchar Medical College in the northeastern Indian state of Assam, has made it his priority to try to make the world a happier place, if just a little bit.

Senapati was recently filmed dancing to the Bollywood track “Ghungroo” from the film “War” to cheer up his patients who were hospitalized with the coronavirus.

COVID-19 patients in India could use a lift. The country passed a grim 7.7 million reported coronavirus infections on Thursday and more than 116,000 deaths.

As you can see in the video, Dr. Senapati nails the signature hook step popularized by Bollywood actor Hrithik Roshan. He also channels some old-school Michael Jackson.

With more than 5.4 million views since his colleague Dr. Syed Faizan Ahmad posted the video on his Twitter feed, Senapati is an internet sensation. Even the Bollywood star Hrithik Roshan tweeted about it to his more than 29 million followers.

Senapati’s dancing took place in the recovery room at Silchar, with a few patients and colleagues in attendance.

“It was the last of the seven days of grueling duty at the COVID ward,” Senapati said, according to Indian Express. “We were to start our mandatory quarantine the next day — my colleagues had already told me that I must dance on the last day of my duty.”

There’s a famous quote from Ann Richards that seems fitting: “After all, Ginger Rogers did everything that Fred Astaire did. She just did it backwards and in high heels.”

Senapati did everything Roshan did. He just did it in a face shield and with shoe covers.