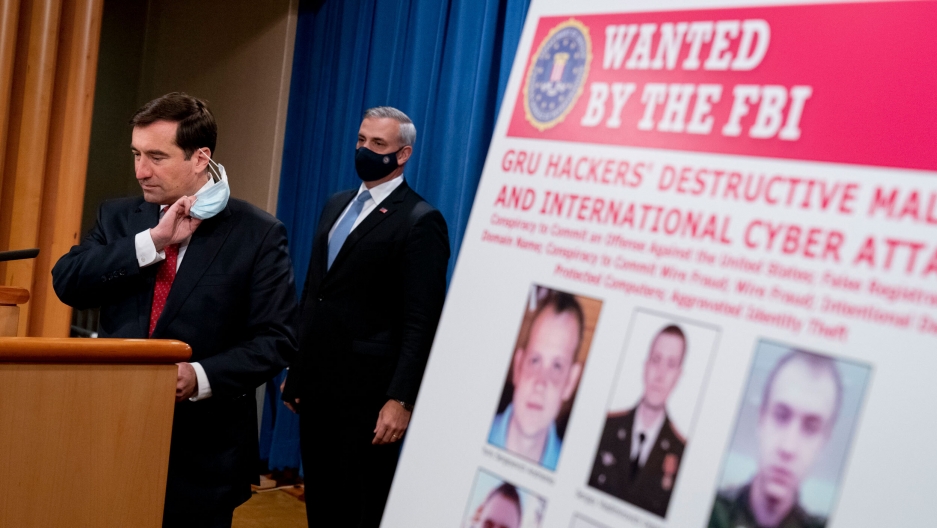 A poster showing six wanted Russian military intelligence officers is displayed as Assistant Attorney General for the National Security Division John Demers, left, takes the podium to speak at a news conference at the Department of Justice, Oct. 19, 2020.

The US Justice Department unsealed charges Monday against Russian intelligence officers for wide-ranging cyberattacks. The indictment accuses six defendants of hacking incidents that targeted a French presidential election, American companies and the opening ceremony of the 2018 Olympics, among other targets. The defendants’ unit is the same Kremlin team that staged the 2016 US presidential election interference and is part of the GRU, the Russian military intelligence branch.

While US election interference is not part of the indictment, one of the defendants was also named in former special counsel Robert Mueller’s investigation. But Assistant Attorney General John Demers said the timing was not related to the upcoming US election.

Prosecutors allege that the crimes — which caused billions of dollars in losses — were attempts to promote Russian geopolitical interests and punish Moscow’s enemies. Scott Brady, the US Attorney for the Western District of Pennsylvania, where the 50-page indictment was filed, said the hacks were “some of the most destructive, most costly, most egregious cyberattacks ever known.”

One of the malware attacks, known as NotPetya, originally targeted the Ukrainian power grid but spread and infected computers around the world and damaged operations for the Heritage Valley Health System, serving many thousands of people in Pennsylvania.

US President Donald Trump announced Monday that the State Department will remove Sudan from a list of countries that sponsor terrorism, with Khartoum apparently agreeing to pay $335 million to victims and their families from three terrorist attacks in 1998 and 2000. The move clears the way for Sudan to receive international aid and to normalize relations with Israel, a result that two US officials said could happen within several days.

And scientists in the UK have announced plans to start the world’s first “human challenge” trials for COVID-19, deliberately infecting healthy volunteers with the coronavirus to speed up the road to a vaccine. British scientists say the strategy could accelerate vaccine development by three months and save thousands of lives, whereas many US experts believe such tactics are too risky and unnecessary. The experiment, set to begin in January, will keep 19 young volunteers at a biosecure London facility where the live virus will be inserted into their noses.

Retired US generals warn against calling the US election too early 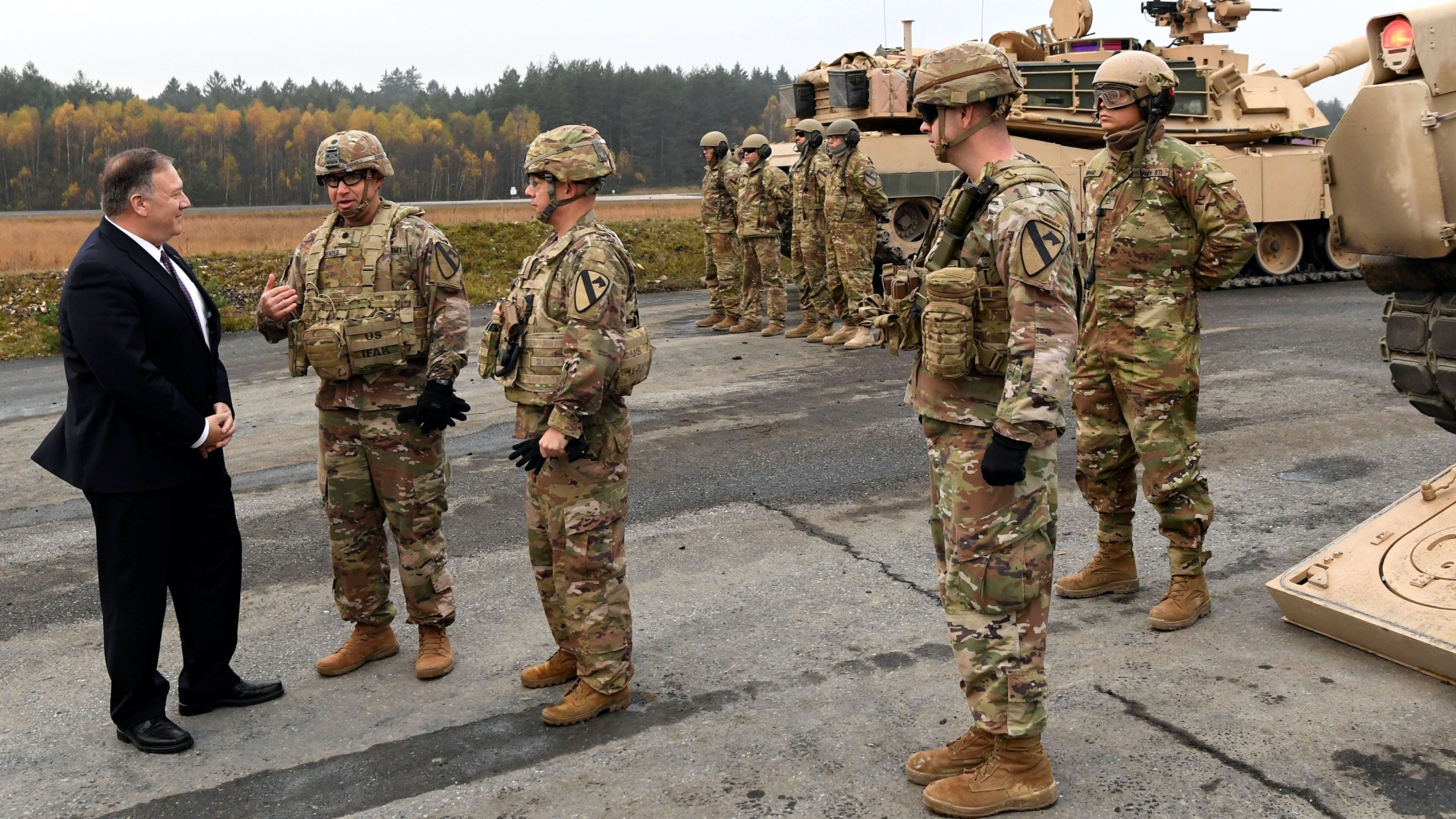 US Secretary of State Mike Pompeo speaks with US soldiers during his visit at American military installations in the German communities of Grafenwoehr and Vilseck, Germany, Nov. 7, 2019.

As Nov. 3 approaches, calls by President Donald Trump to declare a winner on election night have raised fears within the biggest, oldest group of mail-in voters: members of the military.

A new, nonpartisan group of retired US generals and veterans has come forward to say that declaring a winner too early could disenfranchise the 172,000 active-duty service members abroad and their families.

Amid pandemic, Venezuelans hit the road again in search of work 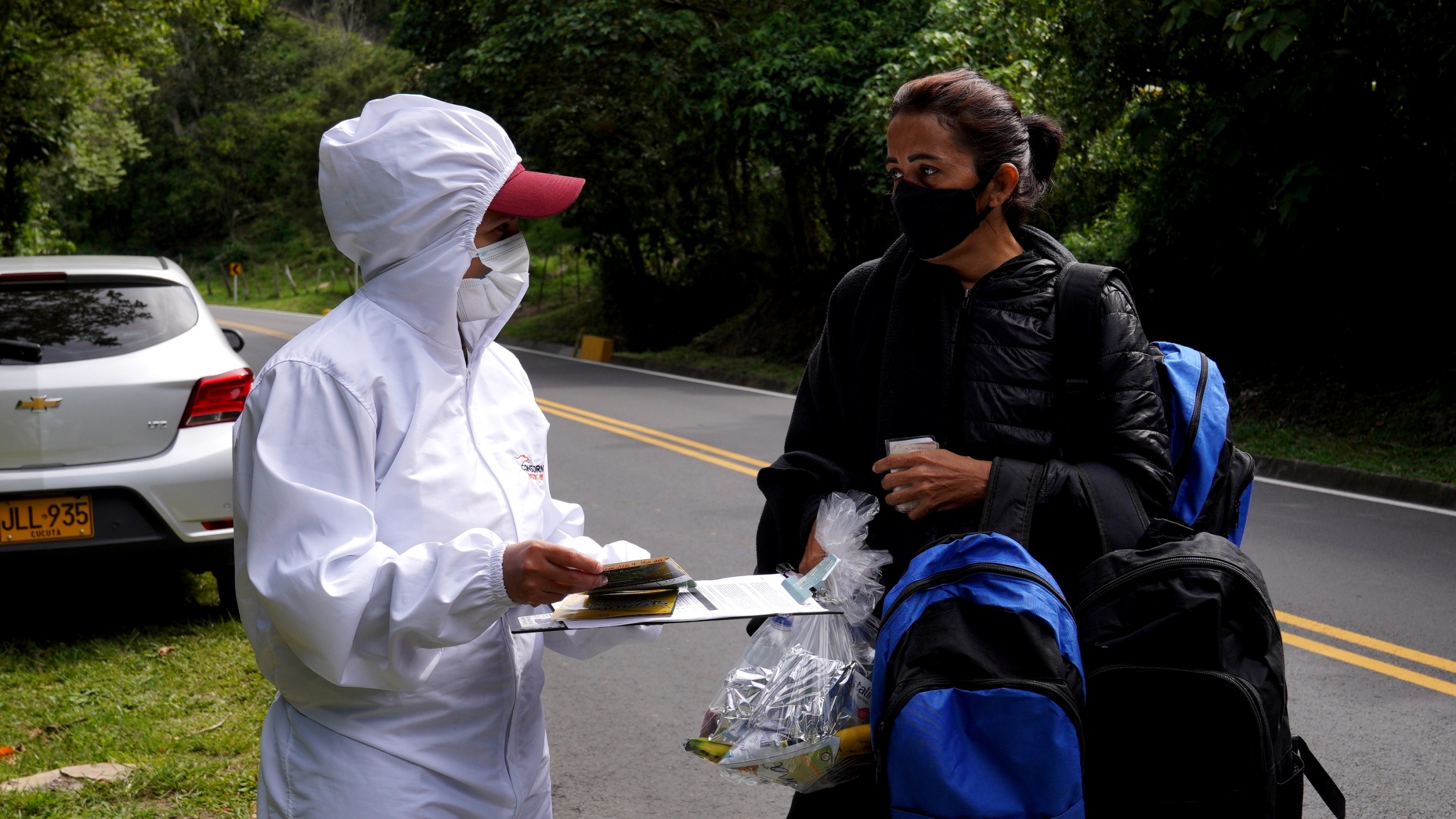 Veronica Gomez, who was traveling with her partner and her son, receives backpacks from a humanitarian worker on Oct 1. The backpacks included energy bars, toiletries and ski masks, for the cold weather.

As neighboring countries reopen their economies, thousands of Venezuelan migrants are leaving the country again to look for work. But the pandemic is making their route through South America tougher.

Health officials around the world continue to urge people to wear masks and social distance to prevent the spread of the coroanvirus. Sometimes, a catchy tune helps reinforce the message. 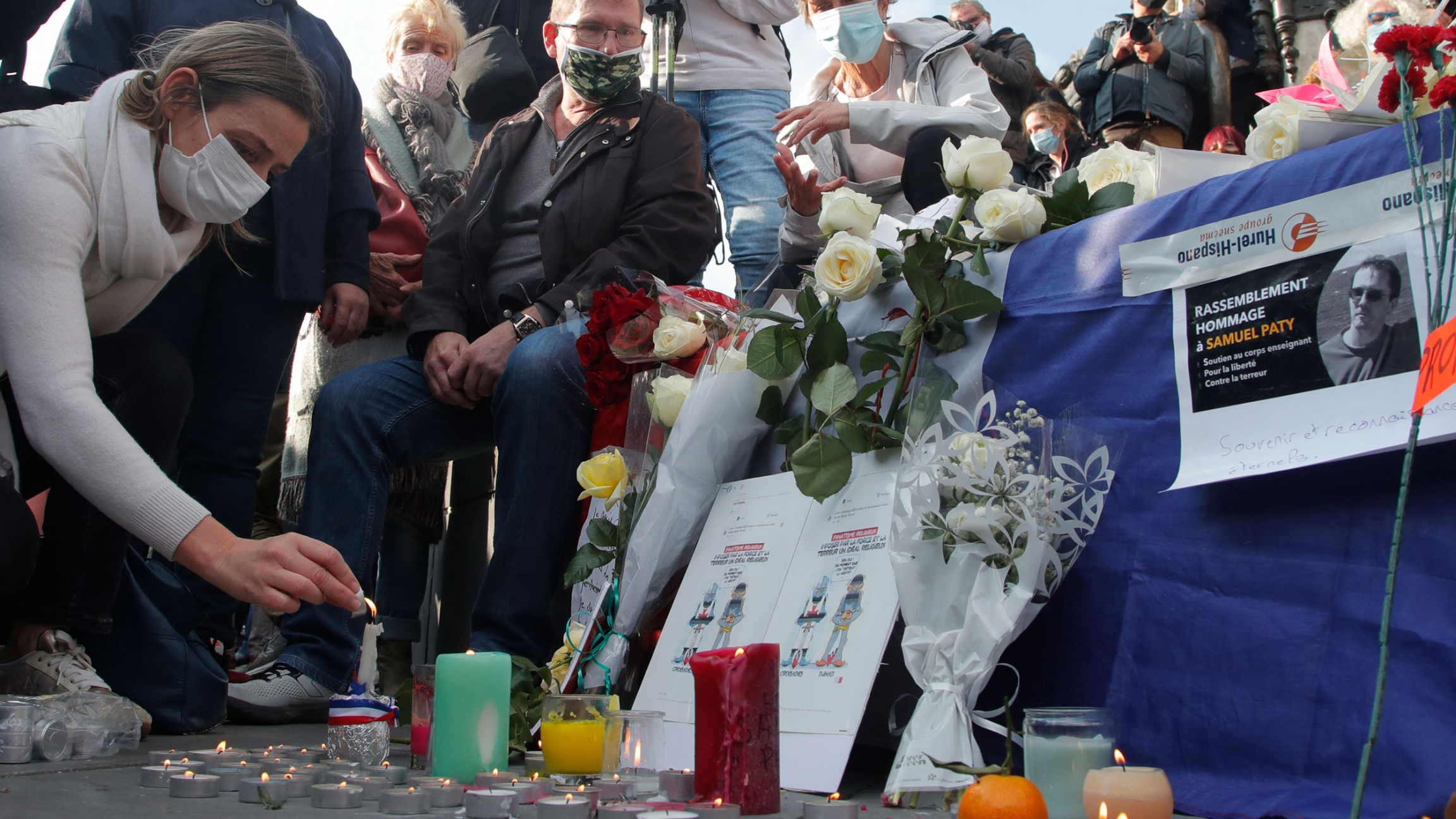 A woman lights a candle on Republique square during a demonstration in support of freedom of speech and to pay tribute to a French history teacher who was beheaded near Paris, Oct. 18, 2020.

French police on Monday conducted raids of Islamic associations and individuals suspected of extremist religious beliefs after the beheading of a history teacher near Paris. The teacher was fatally attacked in the street after having shown his class caricatures of the Prophet Muhammad in a discussion on free speech. And, violence between Armenia and Azerbaijan is now heading into its third week, even after multiple attempts at a ceasefire. Also, more than 50 people have died in Turkey over the past week after drinking bootleg alcohol.