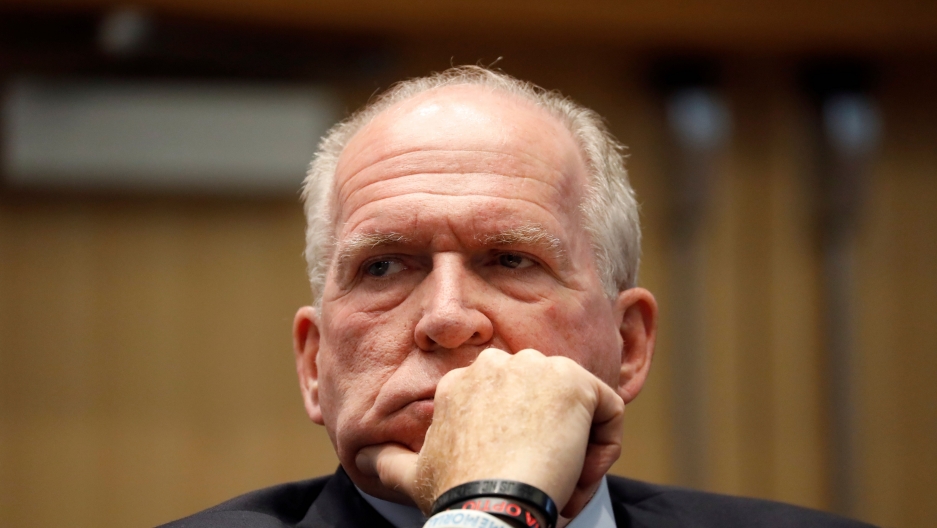 Former CIA Director John Brennan listens during a panel at The Center on National Security at Fordham Law School in New York, Sept. 4, 2018.

Many of us are worried these days about the upcoming presidential election. And what comes after the voting. Among those with a creeping sense of foreboding is America’s former top spy.

"I am very concerned. I do believe that these will be rocky times ahead for us," ex-CIA Director John Brennan told The World.

Brennan says the next 100 days leading up to the inauguration may be especially dangerous. Brennan, who has a new book out called, "Undaunted: My Fight Against America's Enemies, At Home and Abroad," spoke to The World's host Marco Werman about the state of affairs.

Marco Werman: Before we talk about your book, I’d like to ask you for your insights on this very fraught moment we’re living in. We are already living through the most nerve-wracking weeks before a general election in my lifetime — not just the tone that Trump has set not conceding to a quiet defeat, if that’s the case, but a warning from poll-watchers about outright voter intimidation, not to mention a repeat of the Russian hacking and disinformation campaign in 2016. Will Americans be taking part in a safe and secure election?

John Brennan: I think Donald Trump is going to resort to any tactic to try to emerge victorious in the election. I'm sure he's going to pursue a legal challenge to the outcome and he may, in fact, embolden his supporters to try to rally in the streets in support of his reelection. But I do have faith and confidence in the institutions of our government. I believe that the US military is going to stay out of that partisan fray. And I do believe that our FBI and other professionals are going to do their utmost to try to ensure that the will of the American people is going to be realized come Inauguration Day.

The peaceful handover of power is how it's always worked in my lifetime. Is there any role the intelligence community like the CIA and the FBI could play in preventing an election from going down this path of being stolen?

Well, I think the CIA and the FBI and other government agencies departments really need to honor their responsibilities to not get involved in domestic politics. At the same time, I think they have to be outspoken and forceful in terms of what it is that they are seeing, both on the domestic front as well as on the international scene that could, in fact, represent a compromise of the integrity of the election. And I am hoping that our leaders of those communities are going to fulfill their constitutional obligations and obligations to the American people to speak truth to power and not be used as pawns as Donald Trump continues to try to wrest victory from this election.

So, let's talk about foreign adversaries who might try to meddle in this election. It always seems to be happening. The disinformation campaigns. But we're also hearing that foreign actors have more sophisticated tricks up their sleeves than in 2016. What are you hearing?

The Russians are very sophisticated cyberactors. They showed it in 2016. But I'm sure that over the last four years, they've become even more adept at trying to push their propaganda in that digital environment, and our country, which prizes individual rights, freedom of speech, the social media environment provides a very ready venue for the Russians, the Chinese, Iranians or others from outside of this country to try to shape and influence the attitudes, views and the votes of Americans.

But also, there are a lot of very sophisticated cyberactors at home. So, the opportunities for exploiting that environment continue to go up. And we need to do what we can to again balance our emphasis on freedom of speech with the security requirements that I think the 21st-century day and age demand.

So, a very unusual president, an unprecedented time. Is it fair to say that the intelligence community of your generation that was typically focused externally on the threats to American security — and now this idea of an internal threat coming from the president of the US himself — is that something you and your contemporaries ever anticipated?

My focus was abroad, and I looked at authoritarian leaders and authoritarian regimes. And unfortunately, I think that the authoritarian leaders' playbook has been used now here domestically in terms of how a demagog can rally, support and develop sort of cultlike support among citizenry. I didn't believe and didn't think that it was going to, you know, come here in the States. But the agencies of the intelligence community that are focused on foreign intelligence, those are the limits of their responsibilities and authorities on foreign intelligence.

They need to provide the FBI and the Department of Homeland Security, which has responsibility for the homeland, these foreign intelligence, you know, responsibilities of the CIA and NSA and others. Those agencies need to feed the FBI and Department of Homeland Security all that they know and have acquired about efforts by foreign governments and intelligence and security services in terms of what they're trying to do to interfere domestically here.

So, let's dive into some of the themes of your book, "Undaunted." You say your most egregious error was not speaking out against waterboarding and other interrogation techniques that you know are morally wrong. You have pointed out that you were not in the chain of command when the agency used torture, but you were deputy executive CIA director in 2002 and 2003 at the start of the so-called global war on terror. So, you were close to the people who were using torture. Do you feel some part of your legacy is tainted by that?

Well, first of all, I don't believe that the CIA's detention interrogation program, when it was carried out consistent with the authorities it was given, was torture because it was duly authorized by the president of the United States, George W. Bush. It was deemed lawful by the highest legal advisory body within the executive branch, the Office of Legal Counsel and Department of Justice. So, CIA officers who were duty bound to carry out that program because it had all of the features necessary for a lawful program, carried it out.

I think the CIA's reputation, as well as mine, has been tainted by that program because, you know, looking back on it now, I still understand why it was authorized and implemented by US officials. And I talked to some people at the agency about it, how I was opposed to it. But, yes, looking back on it, I think I should have done more, you know, should I have resigned? Well, I never considered that. And I still don't believe that would have been the right thing for me to do.

So, you know, I understand that there is, you know, outrage and condemnation of that program. I think these are lessons that we all learn from our experiences. And when I was director of CIA, I vowed never as director to ever allow such a program to be reconstituted.

It did happen, though. Are you saying the interrogation program that was described to you and the people who authorized it did not sound like a torture program or that you knew what it was and you, along with others, gave it a green light and now you've regretted it?

Well, again, it wasn't up to me to give it a green light. But yes, I understood with the program, I didn't know a lot of the details of it until I actually read a cable, which I recount in the memoir. But torture, by definition, is unlawful in the United States. And again, since the Department of Justice had determined that the enhanced interrogation techniques, including waterboarding, were lawful, it was not torture by a legal definition.

Those that exceeded those bounds, well, I think there can be a case made that, yes, they engaged in, you know, this activity that may constitute torture. But for those who followed the guidelines and the parameters of the program, it was at the time deemed lawful.