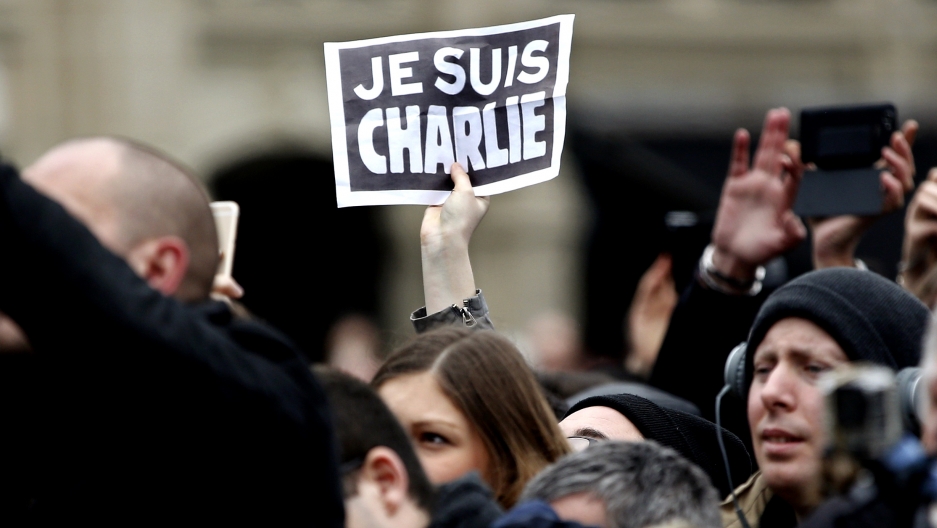 A person holds up a "Je Suis Charlie" ("I am Charlie") sign during a ceremony at Place de la Republique square to pay tribute to the victims of the 2015 shooting at the French satirical newspaper, Charlie Hebdo, in Paris, Jan. 10, 2016.

As the trial for the Charlie Hebdo attack in Paris enters its sixth week, does the slogan “Je Suis Charlie” or “I am Charlie” still resonate today?

In January 2015, after two brothers forced their way into the offices of the satirical magazine Charlie Hebdo, killing 12 people, Paris was under siege as police launched a manhunt for the gunmen. Two days later, another attack occurred at a kosher supermarket in eastern Paris, where several people were held as hostages.

In the days after both attacks, over 1.5 million people took to the streets of Paris in a demonstration of unity against terror, with many wearing headbands and waving banners with the words “Je Suis Charlie." The slogan became a symbol of solidarity with the Charlie Hebdo magazine and a statement of unity among French citizens.

But Yasser Louati, who was teaching English in Paris at the time, says that sense of togetherness didn’t last long. He says January 2015 represented a turning point in terms of how Muslims were treated in France.

In the days after the shootings, it emerged that the perpetrators of the attacks, the Kouachi brothers, were born, raised and radicalized in France. 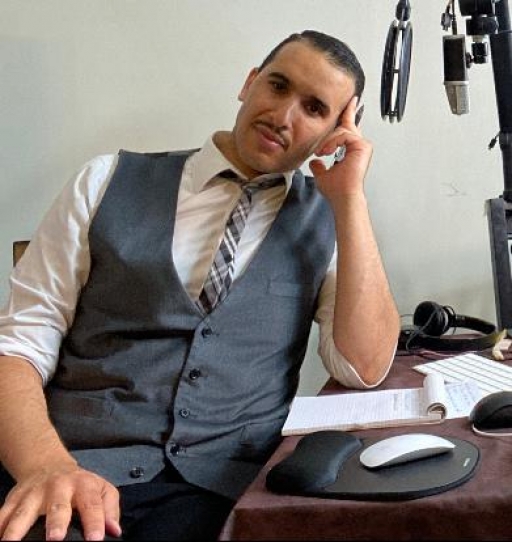 Yasser Louati is a human rights activist with Justice and Liberties for All Committee.

Louati, now a human rights activist with a group called the Justice and Liberties For All Committee, vividly remembers the terror of January 2015.

One of Louati’s students got a phone call during class about the supermarket attack. Louati’s 6-year-old son was attending school two blocks from the store, so he rushed to the area on his motorcycle but police stopped him a mile away from the scene. Louati says he vividly remembers that long walk.

“Try to imagine that mile of walking, just not knowing whether my son was hurt or if anything happened to his school. Because they spoke of an ongoing shooting in that area,” Louati said.

All the children were ultimately moved to safety.

Louati believes that while many in Paris have focused on the role that religion played in driving the gunmen to carry out such abhorrent acts, few questioned if their upbringing in Paris may have also played a part.

Many families, he says, were raided by the police because of calls from their neighbors — who understood little about their religion.

“For example, if the wife wears the hijab, if the husband wears a beard. If there is a  mere suspicion that you are a Muslim ‘radical,’ then you lose all of your basic fundamental freedoms.”

Related: Lallab aims to give Muslim women in France a voice

French legal scholar Rim-Sarah Alouane says the Charlie Hebdo attack allowed those who were already suspicious of Islam to openly display their bigotry. The emergency laws were extended every six months, and eventually, Alouane says they were effectively adopted into common law.

Anti-Muslim rhetoric — once seen as the preserve of far-right politicians like Marine Le Pen — was being spouted by centrist politicians and journalists on national TV, says Philippe Marlière, a professor of French and European politics at University College London.

“Je Suis Charlie” appeared no longer to be about unity, but about conforming to a vague idea of French identity that left little room for religious diversity.

Related: Burkini ban in France is suspended after court ruling

“Whatever your background, ethnicity, religion, you needed more and more to conform to a kind of elusive French identity, which, when you read between the lines, is the sort of ‘standard’ French person: White, Catholic or atheist, but certainly there's not much room for Muslims in there."

“Whatever your background, ethnicity, religion, you needed more and more to conform to a kind of elusive French identity, which, when you read between the lines, is the sort of ‘standard’ French person: White, Catholic or atheist, but certainly there's not much room for Muslims in there,” Marlière said.

The drift of Macron’s party La République En Marche further right appears to be compounded by the French president’s recent announcement of a proposed new law to tackle radical Islam, or “Islamist separatism,” as he calls it.

The legislation aims to curtail foreign funding of mosques and requires that imams are trained and certified in France. Many Muslims believe they are once again being unfairly targeted. But a recent survey in France shows 75% of respondents approved of the new bill.

French author Alexandre Del Valle is among those supporting the president’s plans. 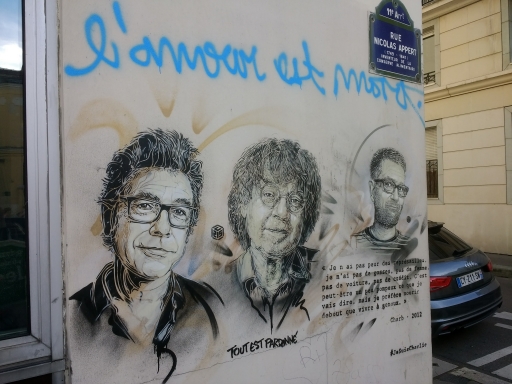 A mural depicts several of the Charlie Hebdo journalists who lost their lives in the attacks on their offices in Paris in January 2015. Photo taken in 2017 on Rue Nicolas-Appert, near the former office.

Del Valle doesn’t buy the Charlie Hebdo magazine or particularly like its coverage. Nor did he approve of the newspaper’s recent decision to reprint the cartoons of the Prophet Muhammad, which provoked the 2015 attack. But Del Valle does believe Charlie Hebdo should have the right to publish what it wants. Freedom of speech is an “essential freedom” in France, he said.

Professor Marlière says the tone of the magazine changed over the years from a liberal satirical newspaper to one that seems to repeatedly target Muslims.

Louati, who is Muslim, says reprinting the cartoon was deeply offensive.

“If Charlie Hebdo is truly about freedom of speech, well, how about Charlie Hebdo makes fun of the journalists who got killed in the newsroom? That would be extremely unacceptable. But it wouldn't be more immoral than making fun of the poor Kurdish boy who was found dead on a beach because his parents were trying to flee war-torn Syria for a better life,” Louati said.

The magazine printed a mocking cartoon of Alan Kurdi, the 3-year-old Syrian boy whose body was found washed up on a Turkish beach in 2015 after the dingy his family used to try and reach Greece capsized.

The freedom of speech debate in France after the Charlie Hebdo attack extends beyond newspapers and magazines. After January 2015, French comedians found themselves questioning which subjects were fair game for their jokes.

Jonathan Ervine, senior lecturer in French at Bangor University and author of “Humour in Contemporary France,” says several comedy programs were dropped from TV schedules in the immediate aftermath of the attack. Famous French comedian Stéphane Guillon has spoken about his fear of the consequences of mocking the Prophet Muhammad, Ervine says. 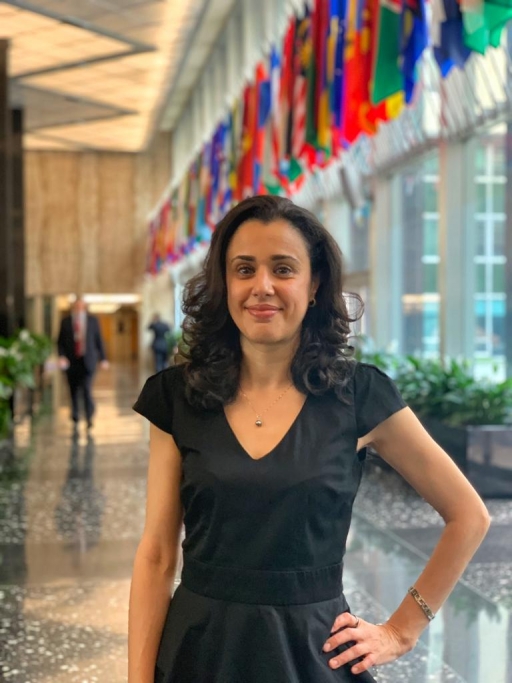 Muslim comedians, too, are questioning what they can and cannot say, but Ervine says he has spoken with Mustapha El Atrassi and Sophia Aram, both of French Morrocan descent, who believe that tackling sensitive subjects with humor is more necessary now than ever.

For five weeks, the trial of 14 people accused of being accomplices to the Charlie Hebdo attack, has heard harrowing testimony from survivors. It’s a reminder of the sense of terror that prevailed in Paris in the months after the assault.

French scholar Alouane said 2015 and 2016 were “heavy years in France.” But after a couple of years, people grew tired of hearing the word terrorism everywhere and no longer wanted to live in fear, she says. Today, Alouane says, they just want to get on with living. “Now, we think ‘carpe diem, seize the day.’”