Melting ice in the Arctic Ocean and on Greenland’s ice sheet are signs of accelerating climate change — but China’s leaders see an upside.

“The melting ice also provides economic opportunities for the development of the Arctic, including for the Asian countries,” said Gao Feng, China’s special representative for Arctic Affairs, at the October 2019 Arctic Circle conference in Reykjavík.

China has even added a "Polar Silk Road" to its Belt and Road Initiative, one of the most ambitious global infrastructure projects ever. Through it, loans from Chinese state banks are funding the building of roads, railways, ports, pipelines, 5G telecommunications systems and more, all around the world — and now, in the Arctic as well.

The Polar Silk Road applies the same approach to Arctic countries, with China investing in mining and energy, and setting up research stations and satellite data receiver stations. It is also working with Russia to link the Northern Sea Route through the Arctic Ocean with China’s Maritime Silk Road that starts in Asia and extends to Europe. That route can shave 10 days or more off a journey between China and Europe, compared to going through the Suez Canal.

China’s initiative has revived US interest in the Arctic and stoked concerns over an ambitious rising power.

China’s initiative has revived US interest in the Arctic and stoked concerns over an ambitious rising power.

Over the past decade, China has made its Arctic ambitions known and its presence felt throughout the region. It successfully lobbied to become, in 2013, a permanent observer to the Arctic Council, a high-level, intergovernmental forum formed by the eight countries that have territory in the Arctic: Canada, Denmark, Finland, Iceland, Norway, Russia, Sweden and the United States.

Greenland is of particular interest to China for myriad reasons: its uranium and rare earth elements; oil and gas reserves believed to lie off its shores; fish in its territorial waters, and its strategic position relatively near the United States.

The US has had a military presence in Greenland since World War II; the US set up air bases there when Germany occupied Denmark — then the colonial power controlling Greenland. The US Consulate in Greenland closed in 1953. Its only military base now is Thule Air Base in northern Greenland.

Greenland has had home rule since 1979, with Denmark still controlling foreign and military policy. A strong pro-independence movement is pushing for Greenland to eventually become its own sovereign state. A Beijing-based, Arctic think tank has noted that an independent Greenland, with 57,000 people on a resource-rich territory larger than Alaska, could be a real opportunity for China.

“This will be the key node for the successful implementation of the Polar Silk Road,” said Xiao Yang, director of the Arctic Research Center at Beijing International Studies University, in a recent paper.

That may be one reason President Donald Trump offered to buy Greenland from Denmark — an offer Denmark’s Prime Minister Mette Frederiksen called “absurd.” It’s also led to the reopening this past June of a US Consulate in Greenland’s capital city, Nuuk, and to increased US engagement in Greenland and the Arctic.

“We are hosting military exercises, strengthening our force presence, rebuilding our icebreaker fleet, expanding coast guard funding, and creating a new senior military post for Arctic affairs, inside of our own military,” US Secretary of State Mike Pompeo said in a May 2019 speech to the Arctic Council. 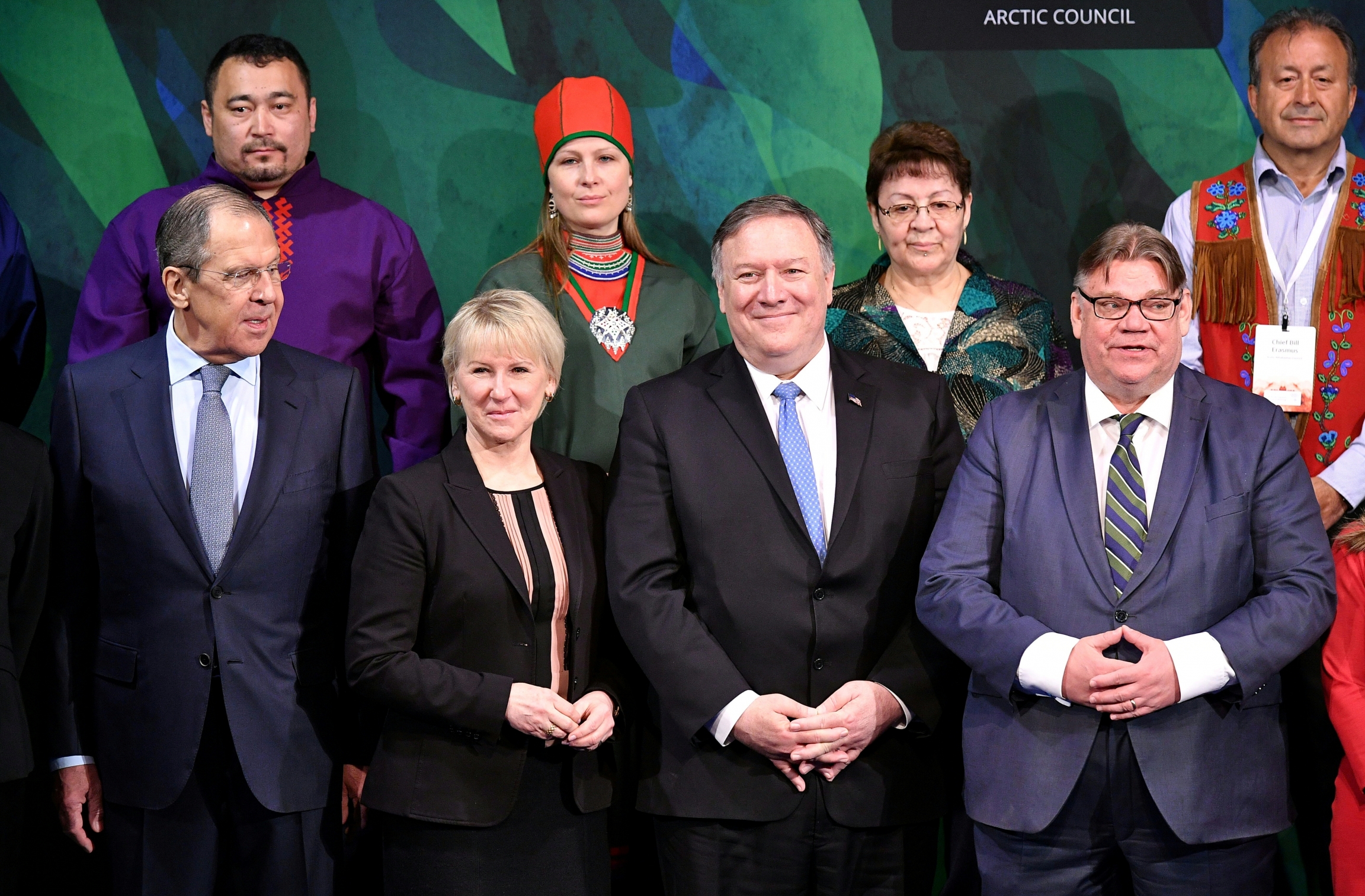 Front row from left, Foreign Ministers of Russia, Sergei Lavrov, Sweden, Margot Wallstrom, US Secretary of State Mike Pompeo and Finland's Foreign Minister Timo Soini pose for a picture during the Arctic Council summit at the Lappi Arena in Rovaniemi, Finland, May 7, 2019.

“Certainly, the Chinese military has been more involved in the Arctic, especially through cooperation with Russia,” said Marc Lanteigne, chief editor of Over the Circle, a website on Arctic security.

He is also an associate professor of politics, security and international relations at the Arctic University of Norway in Tromsø. But Lanteigne says China’s primary interests in the Arctic are more about access to resources and to the Northern Sea Route through the Arctic Ocean. For now, the route is only open from late July until the waters freeze, and Russia uses a fleet of icebreakers to clear ice even then. China has two icebreakers of its own. Both Russia and China expect that climate change will make increased use of the Northern Sea Route possible — and profitable.

China has been investing elsewhere in the Arctic, too. Greenland’s government has courted such investment.

Chinese companies are interested in mining in Greenland, including a proposed project to mine rare earth minerals and uranium, working with an Australian partner. The proposal is now undergoing safety and environmental reviews.

A leading Chinese state-owned enterprise, the China Communications Construction Company, was also under consideration to expand three of Greenland’s airports, in Nuuk, Ilulissat and Qaqortoq, to increase tourism. But US pressure on Denmark related to security concerns led the Danish government to contribute funding for the airport expansion projects, and choose a different contractor.

“At the end of the day, it’s not interesting for me whether the money comes from China or from the US, or from Canada, or from any country,” he said. “For me, the most interesting part is making progress and growth in Greenland.”

He says before Greenland can become independent, a goal he supports, it needs more and better education and job opportunities for Greenlanders. More than 80% are Inuit, close cousins of Inuit in Alaska and Canada, and climate change has affected the ability of some to live and hunt in smaller, more remote communities. He sees a future for Greenland in which tourism and investment bring new opportunities, both economic and political. And he hopes much of that investment comes from Greenland’s nearest neighbors and NATO partners, the United States and Canada.

“We have other considerations in terms of security matters, which foreign bodies that we attract to Greenland, not only short term, but in the long term,” he said.

Qujaukitsoq sees a future for an independent Greenland that is also still firmly part of NATO and not, like Djibouti in eastern Africa, a host to both a US military base and a Chinese one.

“I don’t think it’s desirable for us to have Chinese military in Greenland,” he said. “It’s out of the question, as I see it.”

This story was reported with a grant from the International Women's Media Foundation and is a production of the Global Reporting Centre.