At around 7 p.m. on Saturday, tens of thousands of people in cities and towns across Israel came out to protest with demands for Prime Minister Benjamin Netanyahu to resign.

Netanyahu is facing corruption charges in court, but people are also angry about a new emergency law passed last week aimed at curbing the coronavirus that essentially prohibits large protests or demonstrations during the pandemic.

Israel became the first country in the world to implement a second national lockdown two weeks ago. Since then, the coronavirus cases have skyrocketed to nearly 9,000 daily infections.

Weekly protests against Netanyahu have been going on for more than four months. The main protest site used to be at the prime minister’s residence in Jerusalem, but the new emergency law bans protesters from holding demonstrations or protests more than a kilometer (about a half-mile) from their homes. In response, some activists have turned to WhatsApp, Facebook and even an interactive map to find protests near them.

“[Netanyahu] cares only [about] himself and not for us. That's why I’m here today."

In the Tel Aviv suburb of Givatayim, Ittai Shaked, 49, joined a group of more than 200 protesters, banging pots and pans and waving black flags. “[Netanyahu] cares only [about] himself and not for us. That's why I’m here today,” Shaked said.

Shaked feels that the new law crosses a line. “It made me feel bad because I don’t want to lose my right to protest,” Shaked said.

Lior Vertheim, 33, would rather be protesting outside of the prime minister’s Jerusalem residence about 68 kilometers (about 42 miles) away from Givatayim, but since that’s against the law now, she protested on Saturday night down the street from where she and her partner live. 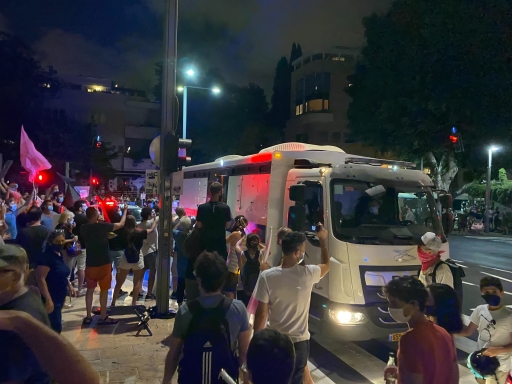 A crowd of protesters gather near a police van in Habima square in Tel Aviv.

“We’re also in a WhatsApp group and also we hear whenever people are here and we just come down,” Vertheim said. That happens once or twice a week. “I hope that it gets more often these days.”

Vertheim doesn’t believe that Israel’s spike in COVID-19 cases is the real reason for strict measures against protests.

“It’s really upsetting because there’s no reason, no good medical reason or anything like that for the lockdown. It’s literally just political,” she said.

Yohanan Plesner, president of the Israel Democracy Institute, has his doubts, too. He said the prime minister’s decision to crack down on protests goes against the advice of his own health and economic officials.

“The uniqueness about the restrictions in Israel is the level of severity, and the fact that the prime minister turned it into such a big issue in fighting the pandemic."

“The uniqueness about the restrictions in Israel is the level of severity, and the fact that the prime minister turned it into such a big issue in fighting the pandemic,” Plesner said.

He added that the economy is taking a hit, too. The restrictions forced many small businesses to close, which just fuels the protests against Netanyahu.

“It seems that the only logical explanation is that he wanted to — in this way — justify the severe restriction of the right to protest,” Plesner said.

One of the biggest turnouts on Saturday night was at Habima Square in downtown Tel Aviv. Police set up barriers ahead of time to divide between the thousands of protesters and separate them into bubbles. But that made it virtually impossible for protesters to maintain social distancing.

As the crowd began to grow, so began the arrests. The World witnessed one protester snatched from the crowd and placed into a police van. Within moments, hundreds of protesters surrounded the van yelling “shame,” as cops dragged another demonstrator away. By the end of the night, 38 protesters were arrested. At one point, police started handing out tickets to protesters for violating the 1-kilometer rule and several protesters said they also got tickets for violating social distancing guidelines.

Sapir told The World she had to dig into family savings just to make ends meet. That’s the case with many Israelis, she said, and it’s why people are directing their anger at Netanyahu.

“It started with a small post I put on Facebook, saying if we can’t have 10,000 people in Balfour [the street where Netanyahu lives] then we’ll have 10,000 demonstration places all over Israel, in each kilometer."

“It started with a small post I put on Facebook, saying if we can’t have 10,000 people in Balfour [the street where Netanyahu lives] then we’ll have 10,000 demonstration places all over Israel, in each kilometer,” Sapir said.

Sapir and other activists are mapping the weekly neighborhood protests online under the motto, “1 kilometer it is.” She said she wanted to help people exercise their right to protest without having to break the law.

“[Israelis] understand that he doesn’t care about them,” Sapir said. “He’s not dealing [with] the economy. He should have been very wise with [the] economy. It’s one of the things he knows how to do.”

Netanyahu, Israel’s longest-serving prime minister, earned the nickname “Mr. Economy,” back in the 1990s, but Plesner, from the Israel Democracy Institute, said that Netanyahu’s approval ratings with the Israeli public have now sunk to 27%.

“They don’t trust the effectiveness of the government that did not seem to build the proper systems and policies and frameworks to deal with the crisis,” he said.

Plesner explains that there’s been a dramatic drop in compliance with health and safety regulations, despite the various coronavirus restrictions. And with winter just around the corner, that means Israel could be in a state of lockdown for some time to come.