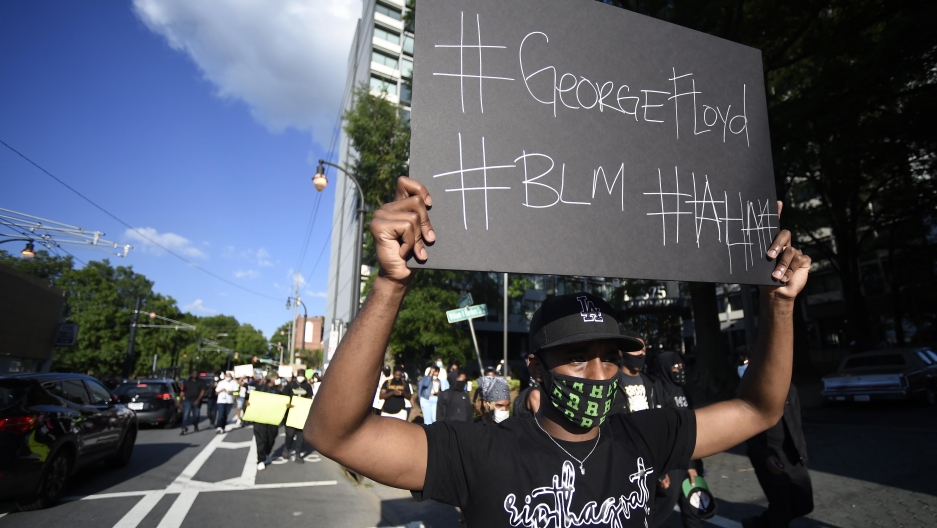 Demonstrators march near Ebenezer Baptist Church, in Atlanta, May 30, 2020.

Growing numbers of Latinos in Georgia have come out to support the Black Lives Matter movement over the past few months — and increasingly, it’s shaping how they could vote in the upcoming US general election.

Jerry Gonzalez, the executive director of the Georgia Association of Latino Elected Officials, recently took part in a recent Black Lives Matter protest in Atlanta. GALEO is focused on getting Latinos in Georgia to the polls.

“Police killing unarmed Black and brown people is really something that has not been addressed systemically,” he said at the protest. “And Latinos stand in solidarity with the African American community in making sure that justice is served.”

Racial justice and police brutality are also important to 20-year-old Leticia Arcila, a first-generation, Mexican American who will vote in her first presidential election this November.

“It's just so frustrating to see how many people have to die and have to face fear every day in order for you to understand that this is wrong,” she said. “It's just so hard to wrap my mind around that some people truly don't believe that Black lives matter.”

Related: For this young Latina voter, pandemic highlights need for 'Medicare for All'

The Latino vote could be pivotal in this election and could help turn some red states blue — or at least more purple. Most Latinos in the US tend to vote for Democratic candidates, but around a third voted for Trump in 2016. As a bloc, their votes — and the issues they care about — could be influential, particularly in a close election.

In Georgia, a battleground state, there are more eligible Latino voters than there were in the 2016 midterm election. And in 2016, Donald Trump won Georgia by just over 211,000 votes; now, there are more than 240,000 Latinos registered to vote in the state.

On Friday, Trump visited Atlanta, where he appealed to Black voters by unveiling his plan for Black economic empowerment and expressing his support for making Juneteenth a federal holiday. The president also spoke about police brutality and the recent deaths of Breonna Taylor, George Floyd and Ahmaud Arbery at the hands of police — though he said the Black Lives Matter movement is hurting the Black community.

He did not address Georgia’s Latino community, though he also recently made a campaign stop in Florida to appeal to Latino voters there.

Related: How Puerto Ricans in central Florida may decide the US election

Arcila, for her part, said she doesn't like the way US officials nationally and locally have handled the coronavirus pandemic. She's watched how other countries have approached it and seemed to be containing the coronavirus more effectively.

That’s influencing how she votes, too.