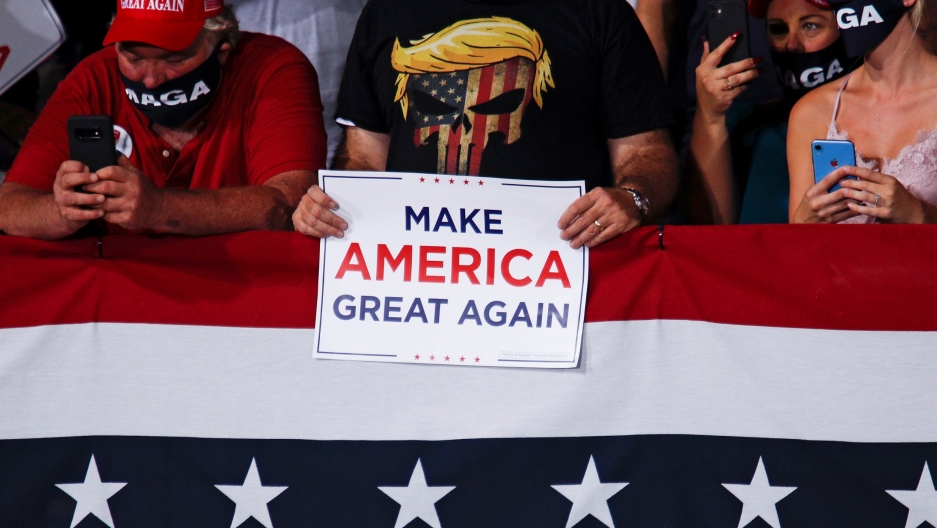 This week saw the idea of American democracy take a hit as President Donald Trump called into question the peaceful transition of power — one of the pillars of democracy.

An exchange on Wednesday between Trump and reporter Brian Karem with Playboy magazine ruffled a lot of feathers.

"Will you commit to making sure that there is a peaceful transfer of power after the election?" asked the journalist, with Trump responding, "We're going to have to see what happens."

The president's refusal to defend that concept brought swift rebukes, with a chorus of voices saying that this does not happen in America. The Senate even unanimously passed a resolution reaffirming the Legislature's commitment to a peaceful transfer of power.

For more on this issue, The World's Marco Werman spoke with retired Lt. Gen. Mark Hertling, who served 37 years in the US Army.

Marco Werman: You commanded troops in Iraq with the intent of bringing democracy there. So, you've witnessed peaceful as well as nonpeaceful transfers of power. What was your reaction when you heard Trump's remarks?

Ret. Lt. Gen. Mark Hertling: There was quite a bit of agony in it, truthfully, when you've sworn your life to defend the Constitution and the kinds of ideas that are embedded in that wonderful document. Really, the essence of our representative democracy is voting for the people we want to represent us. To have President Trump say that was really discouraging and somewhat vile.

We wanted specifically to speak with you because you have witnessed moments in history where a peaceful transfer of power is not guaranteed — for example, in Iraq, you were there during the 2005 elections. How did you work with leaders there to promote a peaceful transition? And what were the results of your work?

I was there in 2003 and 2004, and we were beginning the preparation for the elections. And it was fascinating to me because I was back in Germany during the actual first elections themselves in 2005. And truthfully, Marco, I became very emotional watching it because I know the preparations that took place in order to prepare the Iraqi people to do things. Now, they had some problems in that very first election. A lot of Sunni tribal members boycotted those elections because they felt they were going to be unfair. And then they realized after the election how the only way you can get the kind of leaders that you need are by voting. And in fact, when I went back to Iraq in 2007, I had a subordinate commander who said: "Hey, you've got to come down to my area of operations and meet a guy who wants to transition from being an insurgent into going to school at the University of Baghdad and learning political science so he can someday be a representative of the Iraqi government."

So, what did you discover?

I went down to this small village, met this young guy whose name was Ahmed. I said, "What made you decide to become involved in going back to school and being a politician?" And he said to me, lifting up his finger: "I learned that the power of the finger was greater than the power of the gun." And what he was talking about is, in Iraq during that period, voters would have to dip their finger into a bottle of ink to prove that they had voted and they had only voted once. And what he was saying is, that power of a representative government displaced the fighting that they had seen so much of in Iraq. That was a highly emotional moment for me to see this young man saying that he wanted to be part of the solution, as opposed to part of the problem. Right now, with our president saying the kinds of things he's saying now, it appears that he's trying to divide people and push more of the problems, as opposed to the solutions, on the American society.

When people hear about leaders refusing to hand over power, most people don't think of the US, but now there is this doubt. So, if the US fails to have a peaceful transition of power, what message does that send to the rest of the globe?

Well, I'm an optimist in this regard, and I believe our institutions will weather this storm and they will, in fact, hold up and ensure a peaceful transition of power.

What makes you so confident?

I think our other institutions — our courts, our states — they certainly couldn't stand up to the will of the people, just like we're seeing in Belarus today and what's happening in Minsk. Once the people realize that there's crookedness within government, they will react on a much larger scale than even we've seen lately.

Related: Never before have threats to US democracy been so grave, says political scientist

What if President Trump loses and refuses to leave? What happens then?

Again, I think there are institutional norms that will ensure this happens. There is a vision by many Americans about when the military is going to step in and escort them out. That is not the job of the military. That's what happens in a dictatorial regime or an authoritarian regime. We have processes. If the president refuses to leave the White House and attempts to continue government, there are both overt and covert ways to effect his departure. But I don't ever see a march of the military because they would then become a fourth arm of government. And that's contrary to our Constitution as well.

You've made your criticisms of Trump and your support for Joe Biden quite clear over time. And we heard this week from Gen. H.R. McMaster, Trump's former national security adviser. He said this week that he will not become involved with politics because "the military is apolitical and nonpartisan." What do you say to McMaster about that?

Under normal circumstances, that is absolutely true. And truthfully, Marco, I've been conflicted, as many of my colleagues have, about standing up. This isn't just partisan politics. This isn't standing up for a candidate. We have crossed the Rubicon into an area where we are standing up for our nation. This isn't about who gets elected. This is about the continuation of our body politic and who we are as a people. That's the difference between now and what has happened in the past. I relish the thought of getting back to the time when retirees and members of the military can say that they're nonpartisan. But in this case, it has nothing to do with partisan politics. It has to do with the defense of the Constitution.