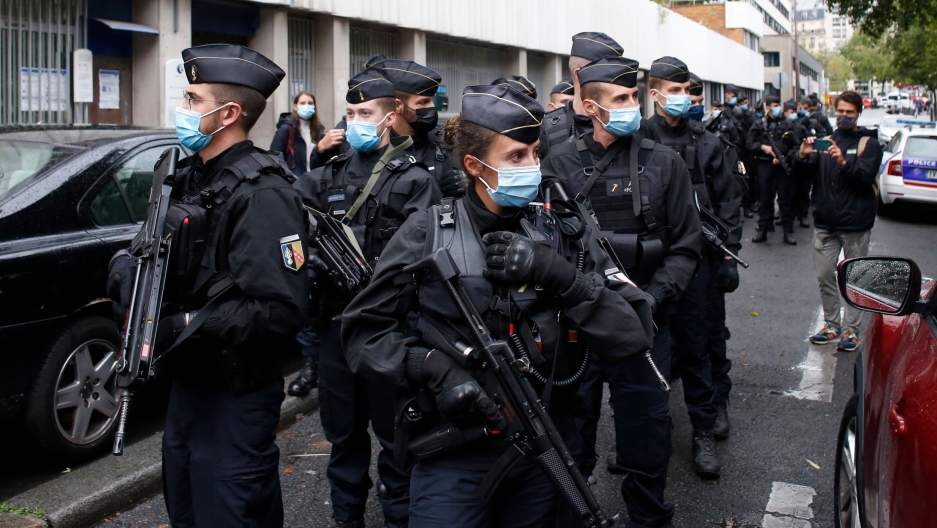 French police officers patrol the area after a knife attack near the former offices of satirical newspaper Charlie Hebdo in Paris, France, Sept. 25, 2020.

In Paris, near the former office of satirical magazine Charlie Hebdo, at least two people were stabbed Friday, with one suffering serious injuries. French police have said two suspects were arrested, one near the Bastille opera house. Law enforcement sources reported a weapon resembling a machete or meat cleaver was found.

City authorities advised the public to avoid the area, saying that a police operation was underway in northeastern Paris. Deputy Mayor Emmanuel Gregoire said on Twitter that a “potentially dangerous” individual was still on the loose. Metro stations in the 11th arrondissement were also closed, and anti-terrorism police were taking over the investigation.

The trial for 14 suspects accused of being accomplices in the 2015 terrorist attack on Charlie Hebdo, where 12 people were killed, began Sept. 2. The court heard witnesses explain how the suspects had wanted to avenge the Prophet Muhammad about a decade after the publication ran satirical cartoons that critics argue mocked him.

North Korean leader Kim Jong-un has apologized for the killing of a South Korean government worker who was shot and burned after crossing into the North just off the shore. A letter sent by Pyongyang to Seoul said that the chairman “feels very sorry that instead of giving aid to our compatriots in the South who is struggling [sic] with COVID epidemic, we have given President Moon and our compatriots in the South a great disappointment with this unseen misfortune in our sea."

Meanwhile, Russian President Vladimir Putin has called for a cyber truce between Moscow and Washington, suggesting that an agreement could prevent election meddling. In a statement, Putin proposed “exchanging guarantees of non-interference in each other’s internal affairs, including electoral processes, including using information and communication technologies and high-tech methods.” But only two weeks ago, Microsoft said it found evidence of hackers targeting the campaigns of both Joe Biden and Donald Trump.

And, officials in Rio de Janeiro have “postponed” the annual Carnival parade, saying that the festival will not take place in February 2021 due to the coronavirus pandemic, as well as financial and organizational issues. Rio’s elite samba schools usually practice most of the year for the event. Carnival was last suspended in 1912.

Belarus opposition leader: 'We are fighting for the future of our children'

Svetlana Tikhanovskaya, a candidate for the presidential elections in Belarus, greets people during a meeting in her support in Brest, Belarus, Aug. 2, 2020.

Many in Belarus and across Europe say the Aug. 9 presidential election was rigged and that Svetlana Tikhanovskaya is the true president. After the election, she fled to Lithuania where she has been leading the Belarusian opposition movement. She told The World's Marco Werman how her life has changed.

"What has changed most of all is the sense of responsibility because you understand that your decision, and your message, that you declare influence on the situation in the country," she said. "But I understand who I'm doing this for, why I am doing this, that I need to work hard now for the future of my children." 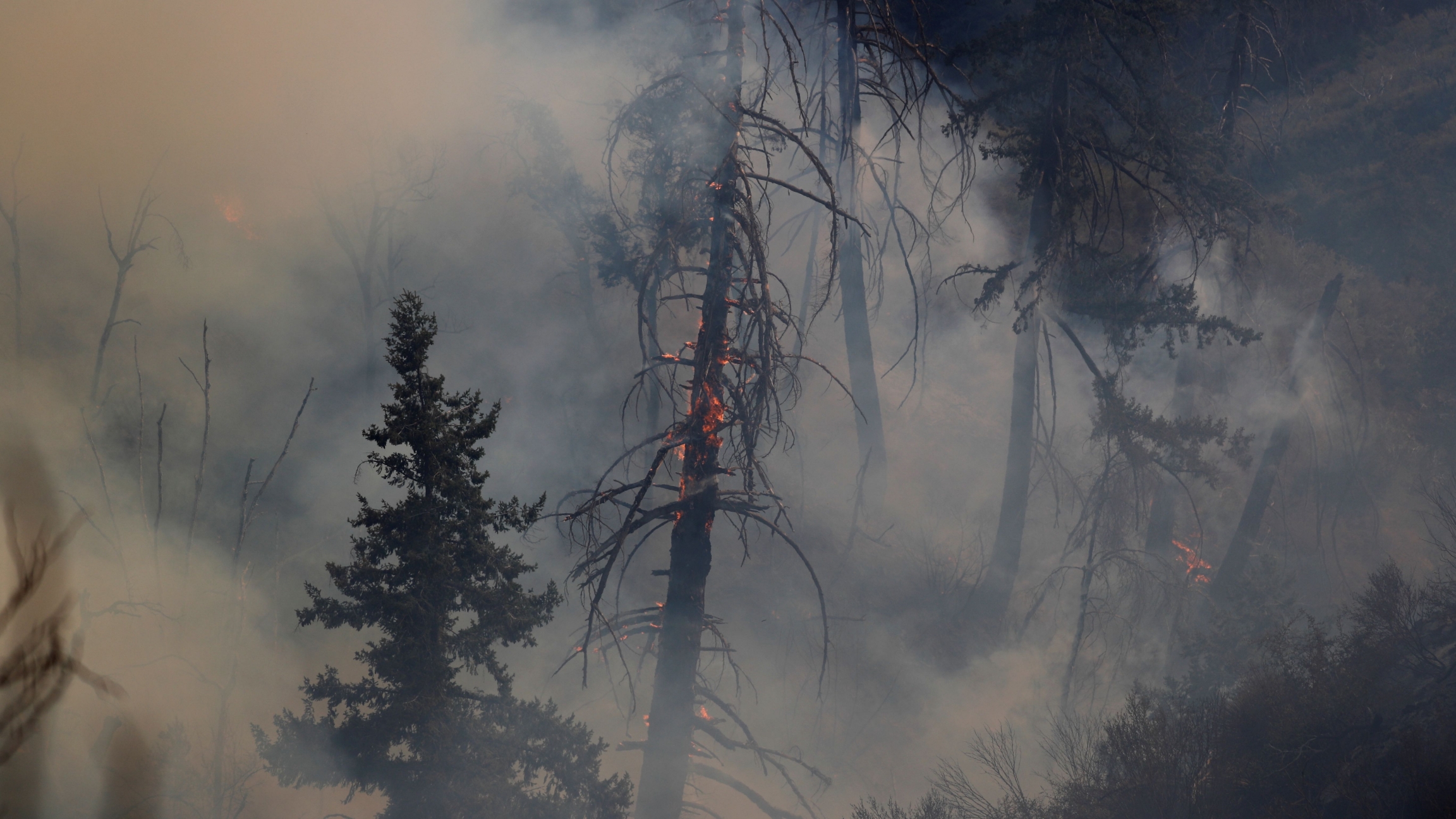 Smoke rises from the Bobcat Fire burning near Mount Wilson in the Angeles National Forest, near Los Angeles, Sept. 23, 2020.

Judith Schwartz, author of "The Reindeer Chronicles," has spent years spotting the good news on global warming and the environment. She says what's needed now to address the climate crisis is "Earth repair."

"When I talk about Earth repair, it basically means healing our landscapes and our seascapes," she told The World's Marco Werman. "We hear about all this devastating news, but one thing that has been neglected in our conversations about climate is the role of functioning ecosystems to climate regulation."

The global pandemic largely put a halt to the weekly school strike demanding action on climate led by activist Greta Thunberg. But on Friday, young people around the world adapted to government restrictions preventing the spread of COVID-19 in their first (masked) protest since the coronavirus crisis began.

School strike week 110.
Today is our global day of climate action, and we strike in over 3100 places!
In Sweden gatherings over 50 people are not allowed due to COVID-19, so we adapt.#climatestrike #fridaysforfuture #schoolstrike4climate #FaceTheClimateEmergency pic.twitter.com/aQqyKgBYIb 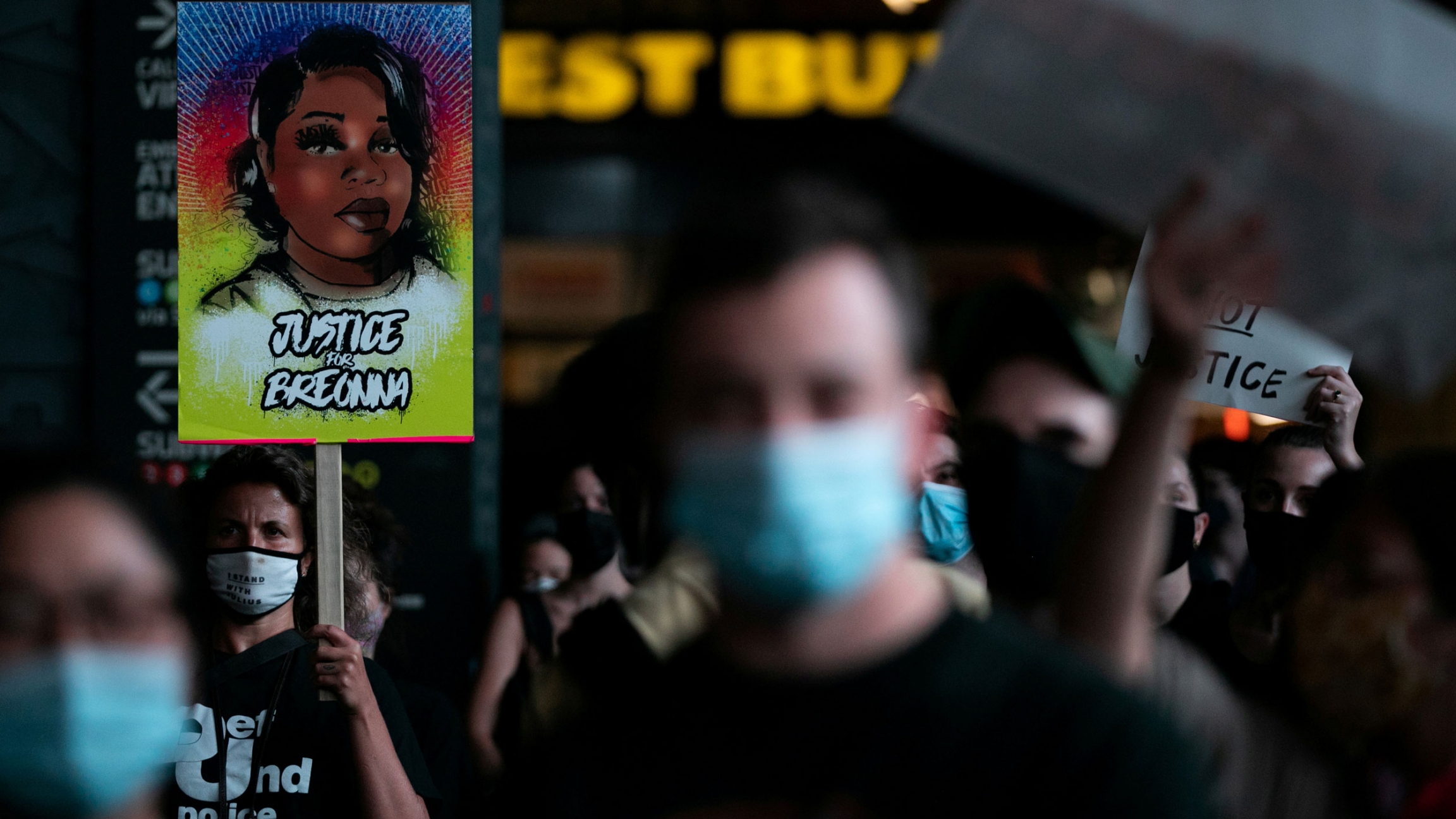 People hold placards during a march following the announcement of a single indictment in the Breonna Taylor case, in New York City, New York, Sept. 23, 2020.

Thursday's announcement that the police officers involved in the March killing of Breonna Taylor would not face homicide charges is yet another low for activists and supporters of the Black Lives Matter movement around the world. And, protesters in Belarus have been in the streets since early August calling for the resignation of President Alexander Lukashenko. The World's host Marco Werman speaks with Belarusian opposition leader Svetlana Tikhanovskaya. Plus, 94-year-old veteran broadcaster Sir David Attenborough is now on Instagram, gaining a million followers in a matter of hours. His goal is to spread the word about environmental destruction and to share ideas on how to save the planet.