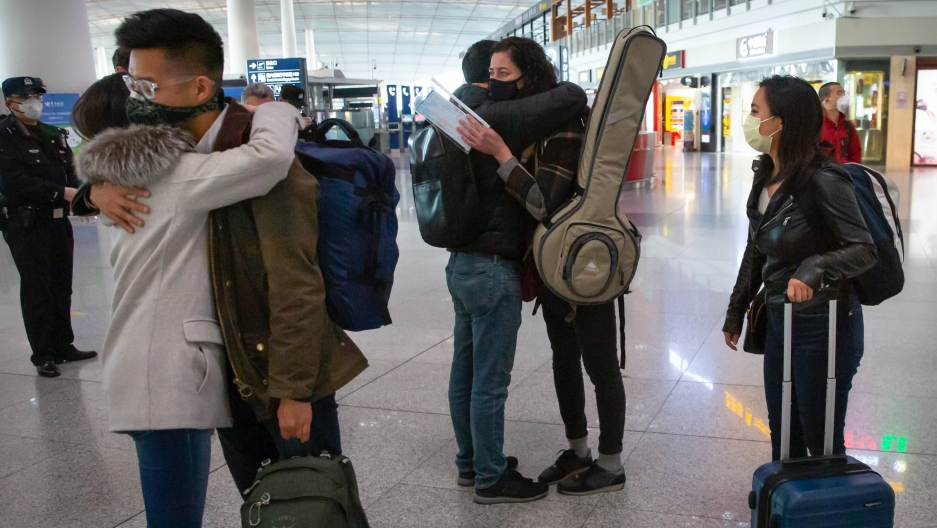 Trade wars, diplomatic squabbles, journalist visas canceled, name-calling. With each passing week, the relationship between the US and China seems to get more contentious.

And all of this has added stress for many binational Chinese and American couples who are now asking why their countries can’t get along.

William Wang and his partner Kit Mention have been together for about a year. The pair met on Tinder.

"Actually, on the first date, I stood him up,” Mention says. “After one week, he contacted me again, and so we went out for dinner.”

Related: China orders US to close its Chengdu consulate

Their plan was to move to the US together this year, but the pandemic canceled those plans.

“Because everything happened when it did, we kind of put everything on hold and we're just here [in Shanghai] for the time being,” Mention says.

The relationship between China and the US has been testy, to say the least, and that’s made it harder to imagine a life together in the US.

But it’s not just COVID-19. The relationship between China and the US has been testy, to say the least, and that’s made it harder to imagine a life together in the US.

“I wouldn’t say that marriage was off the table, but that’s also a very long process,” he adds. Wang jokes that if Mention proposed, he’d say no.

elated: Abruptly canceled, ShanghaiPRIDE could be a harbinger for China's civil society

Politics and the upcoming US presidential election sneak into their conversation sometimes after a few drinks. Hong Kong is usually off-limits. But like many Chinese American binational couples, Mention says things go better when they don’t talk about the elephant in the room.

Instead, their approach is to keep it fun and try to understand the other person’s point of view.

“I wouldn’t say it’s a politics-free zone, this living room, but we try to keep a light touch.”

“I just like to think about my relationship with William and depoliticize it,” says Mention. “I wouldn’t say it’s a politics-free zone, this living room, but we try to keep a light touch.”

Theresa Decker is an American therapist who has worked with couples and families in Shanghai for the past seven years. She sees a lot of binational couples struggling to work out their differences.

The rising tensions between the US and China can add pressure to already tough challenges, she says.

“When you think about your countries cutting each other off — which is what’s being discussed — what does that mean for going back and forth? ... I think that’s unbelievable stress."

Related: Trump to block US downloads of TikTok, WeChat

Every couple manages that stress in different ways.

In a downtown Shanghai Starbucks, Chris Wang and his wife Yuhan are grabbing a coffee together on their lunch break. The two have been together for about four years and are expecting their second child. They say parenting doesn’t leave much time to think about politics. They focus more on their family relationship.

Related: Italy is caught in the middle of the EU's tussle with China

But differences between their two cultures do seep into their relationship. One of the things they fight about? Air conditioning.

“The general belief here in China by many, many people is that 26 degrees Celsius (79 degrees Fahrenheit) is the best temperature to turn AC regardless of the temperature outside, regardless of how hot it is,” Yuhan says.

The couple usually tries to compromise — and they wish the US and China could figure out how to do that, too.

“Looking at the news, it's just not very comforting,” Wang says.

Watching the US and China fight over policy, trade insults, and block economic activity, this couple has some advice: You can’t just break up.

The pair, along with many other Chinese and American couples, hopes their home countries can figure out a way to deescalate their conflicts.