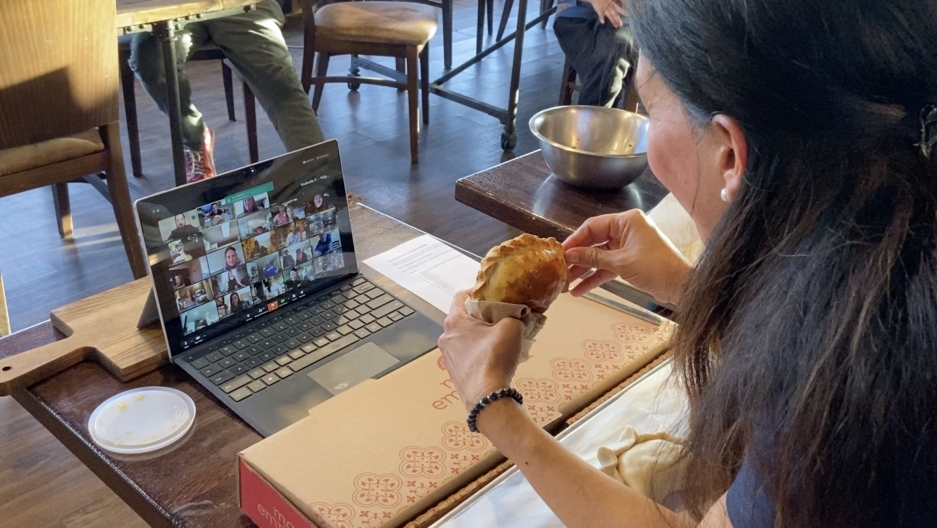 Lorena Cantarovici, CEO of Maria Empanada, has begun teaching empanada-making classes via Zoom to help keep her business solvent during the pandemic.

Lorena Cantarovici recalls when she arrived in the United States from Argentina nearly 20 years ago.

In the US, she worked in several restaurants and fell in love with the industry. She also realized she missed food from her native Argentina — so she thought about opening her own business making empanadas. That idea turned into Maria Empanada, a small restaurant chain with five locations around Denver.

Over the last decade, the number of Latino business owners has grown by 34%, compared to 1% for all business owners in the United States, according to a report from the Stanford Latino Entrepreneurship Initiative, a research and education collaboration between Stanford University and the Latino Business Action Network.

Now, those same businesses — along with those owned by African Americans — are struggling to survive the coronavirus pandemic and face particularly great challenges.

“Latino businesses before the pandemic started small and stayed small,” said Marlene Orozco, lead research analyst with the Stanford Latino Entrepreneurship Initiative. The group has been tracking how Latino-owned businesses are faring through the pandemic.

These smaller businesses often have trouble accessing capital as they start out, Orozco says. Those same challenges remain now. Funding from the US federal government’s Paycheck Protection Program is limited to those who meet a list of requirements. The program, which started in response to the pandemic, offers loans meant to provide incentives for small businesses to keep their workers on their payrolls. Applications are no longer being accepted.

As you know, we are a business started and owned by Lorena Cantarovici, a Latina. Over the last ten years, Latinas and Latinos like Lorena are starting businesses faster than any other group in the U.S. We believe it is an American economic imperative to empower and elevate businesses like ours. Help us today to celebrate National Support Latino Business Day --our collective opportunity to show our country, through actions—and not just words—just how much we appreciate Hispanic business owners across our 50 states and Puerto Rico. Help us send a message loud and clear to other Latinx entrepreneurs, many of whom are fighting for their business lives because of COVID-19, that YOU ARE WITH US! @SupportLatinoBiz #SupportLatinoBiz #toosmalltofail #womanowned #smallbusiness #latina #latinapower #latinxbusiness

Part of the problem for small business owners, Orozco says, was a lack of guidance as they applied for the program.

Cantarovici says she had help filling out the forms. But it took time to figure out the process. Meanwhile, bigger businesses could afford to hire lawyers or teams of people to make sure their applications got in quickly. It left small businesses like Catarovici’s waiting for the second round of funding — which has been tied up in Congressional talks.

“If it [the application] opened at 10 a.m., we were pressing the submit button at that time. But when the funds depleted, it was devastating. It was devastating for me.”

“Of course we applied,” she said. “If it [the application] opened at 10 a.m., we were pressing the submit button at that time. But when the funds depleted, it was devastating. It was devastating for me.”

Adding to that devastation is a language barrier, Cantarovici says. Many small business owners — across all demographics — are immigrants who may not be fluent in English. Navigating that process and all its fine print is not easy, even for native English speakers.

“So, for me, it's very important that I protect myself with the right people next to me, but for very small businesses at the beginning that is so expensive,” Cantarovici said.

That’s why business owners like Cantarovici rely on their community networks to survive, says Orozco. Since the pandemic began, they’ve turned to a rising number of mentorship and support groups for women-owned businesses.

Particularly striking, Orozco says, is the sense of community and helping each other out even when one is facing difficult challenges.

She points to the Spanish idiom donde come uno, come dos — or, "where one eats, two can eat."

“And so really see Latino business owners stretching what they have to reach wide communities,” Orozco said. “Now, of course, that can only go so far.”

Without more help, the future is uncertain for these small business owners. Many are running out of the government cash they’ve received.

Latinos in particular, don’t have safety nets. Cantarovici doesn’t have one. She cut business hours and temporarily closed three of her five restaurants.

Luckily, her empanadas are still selling. She’s adapted to a carryout system that makes empanadas easy to reheat at home. And she’s teaching empanada-making classes online via Zoom.

But she’s worried about sales going down even more, and she hopes for more government help. She says she’s constantly thinking about that, and it’ll be on her mind as she votes in November.