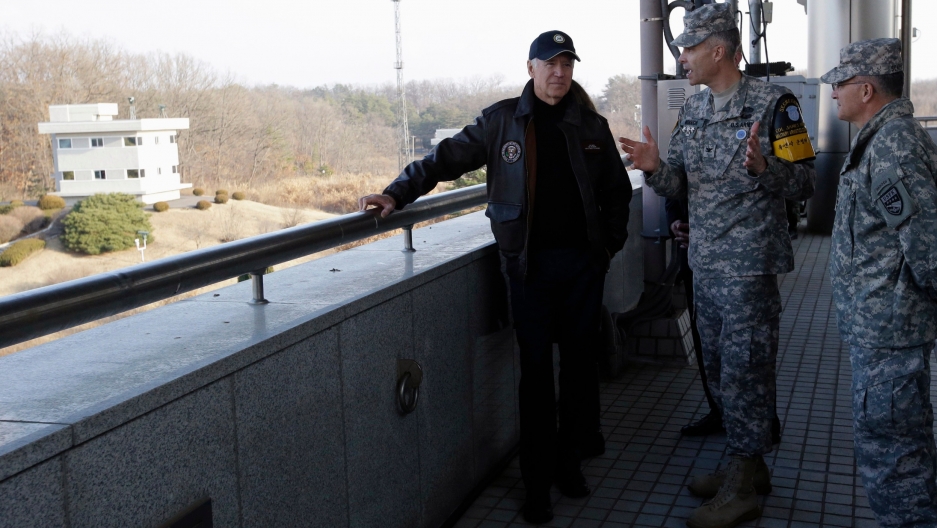 In this file photo from Dec. 7, 2013, US Vice President Joe Biden listens to Colonel James Minnich, Secretary of the United Nations Command, Military Armistice Commission, at the border village of Panmunjom, in the Demilitarized Zone (DMZ), the military border separating the two Koreas.

North Korea has called Joe Biden an idiot. An official statement from Pyongyang says the presidential candidate is in the final stages of dementia. To top it off, officials there likened him to a rabid dog who should be beaten to death with a stick.

Yet Biden, pending the outcome of November’s election, could very well direct North Korea’s fate in the years to come. For decades running, every American president has tried to stop the Kim dynasty from wielding the most powerful weapon known to man.

If Biden wins, he will be the latest to assume that thankless mission: pressuring North Korea in vain to give up its nukes.

The risk of a North Korean nuclear attack is low but the stakes are high. North Korea’s poetic death threats — turning South Korea into a “sea of flame” and reducing America to “ashes and darkness” — are mostly just rhetoric.

But each year, Pyongyang's engineers come closer to perfecting missiles that could deliver on these warnings — allowing the pariah state to better resist its worst nightmare: US-led regime change.

The World asked two experts on US-North Korea relations what to expect if Biden wins the election.

North Korea is always itching to try out its advanced weaponry — either detonating warheads to gauge their intensity or lobbing sophisticated long-range missiles to ensure they can reach their targets.

Yet, each test causes the country's enemies — the US, South Korea and Japan — to bristle and consider ratcheting up sanctions in response.

If Biden wins, Kim Jong-un may be tempted to test heavy weapons in the period between US election day and presidential inauguration, said Duyeon Kim, a senior adviser for the International Crisis Group who specializes in nuclear weapons policy.

“They might even do some long-range missile testing. Its objective would be not only to try to perfect its nuclear weapons technology but also to gain leverage ahead of any future negotiations.”

“They might even do some long-range missile testing,” Duyeon Kim said. “Its objective would be not only to try to perfect its nuclear weapons technology but also to gain leverage ahead of any future negotiations.”

The tactic here is simple. Agreeing to stop these menacing tests would enable Pyongyang to say to a new president: “We’ve just given up something to make you happy. Now, what will we get in return?”

Looking back, there have been two major outcomes from Trump’s self-described friendship with Kim Jong-un.

America has dialed back its war games with South Korea, which are regarded in Pyongyang as rehearsals for invasion. And Kim Jong-un has also scaled back the more bombastic weapons testing. “From the North Korean perspective, that’s a big concession,” said Sheen Seong-ho, a professor at Seoul National University.

Biden could sit down with Kim Jong-un

There may be no way around a face-to-face meeting — if the next president wants North Korea to stop building nuclear warheads.

So far, Biden’s North Korea policy is vague. But he has scoffed at Trump’s flashy summits with Kim Jong-un. The Democratic candidate suggests that, without a deal to “move the ball forward” on reducing nukes, he won’t agree to meet Kim Jong-un.

Here lies the rub. North Korean negotiators “cannot speak about the nuke issue,” Duyeon Kim said. “They say it’s up to Chairman Kim to decide that issue, even though it’s a core element for Team America.”

Unless Kim Jong-un is willing to speak to another high-ranking US official, this means Biden himself might have to rendezvous with Kim Jong-un, whom he has called a “dictator and a tyrant.”

North Korea has consistently pushed the same offer: We’ll shut down our premier nuclear facility, Yongbyon, which produces material for warheads — if the UN and US pull back crushing sanctions, which essentially cut off North Korea from the global economy.

Trump wouldn’t go for that deal at either of his two summits. Since then, North Korean officials have sounded more irritable, seemingly piling on new demands that must precede any future US negotiations.

Some are extremely ambiguous: ending America’s “hostile policy” and suggesting that US officials' mere use the phrase “rogue state” imperils future talks.

What that shows, said Duyeon Kim, is "North Korea saying, ‘America and American officials cannot call us names. If you call us names, we will not show up at the table.’”

“I’m not too worried about a potential President Biden’s willingness to engage in dialogue. Seeing the trajectory, I’m more worried about North Korea not showing up at the table.”

“I’m not too worried about a potential President Biden’s willingness to engage in dialogue,” she said. “Seeing the trajectory, I’m more worried about North Korea not showing up at the table.”

Kim Yo-jong in the spotlight

Kim Jong-un’s sister, Kim Yo-jong, is a high-ranking official also considered as a possible successor. Officially, she’s a top leader within the United Front Department, which manages relations with South Korea and conducts propaganda operations. She has also been known to take on special diplomatic missions.

“She’ll definitely play a role in any future nuclear negotiations,” Sheen said. “Trust between those two siblings runs very deep,” he added, explaining that Kim's sister may be more confident than a trained North Korean negotiator in cutting deals behind the scenes.

If Biden wins, his White House should prioritize making contact with Kim Yo-jong, Duyeon Kim said. “It might be best,” she said, “to aim for reaching his sister to get any type of headway or understanding about North Korean thinking.”

Status quo could prevail, no matter who wins US election

Irrespective of who controls the White House in 2021, the person in charge of the American empire will be stuck with the same old predicament.

North Korea seems to have dozens of nuclear warheads. The US wants to take them all away. Yet, neither wants to risk a catastrophic war that could kill millions in Asia and beyond.

A Trump victory would maintain the “status quo,” Sheen said. That entails Kim Jong-un trying to manage a relationship with Trump veering between unusual warmth and the "simplistic and reckless approach” perhaps best defined by Trump’s 2017 tirades against “Little Rocket Man.”

A potential President Biden, he said, will bring back a “stable and traditional” American policy. This course of action may even downplay the North Korean showdown, “since the US already has so many crises to deal with.”

But the differences between the two camps — when it comes to North Korea at least — are less stark than many of their supporters might imagine. This is not exactly an election between one candidate committed to invading North Korea and another prepared to withdraw all US troops out of South Korea.

“I do not expect a drastic change in American policy towards North Korea regardless of who is in the White House next year.”

“I do not expect a drastic change in American policy towards North Korea, regardless of who is in the White House next year,” Duyeon Kim said. “That has been the case over successive American administrations. The goals and the aims have stayed the same.”

But officials in Pyongyang might be anxiously awaiting the outcome on election night, Sheen said. “I think they’ll be watching closely,” he said.