Jaime Smith remembers hearing the news about George Floyd on social media. From 6,000 miles away in Tokyo, Japan, she watched videos of Americans pouring into the streets to protest.

But Smith, a Black 25-year-old graphic designer from Maryland, now lives in Tokyo. So she couldn’t join the protests in the US.

Smith said Japanese media wasn’t reporting the news, and people weren’t talking about Floyd as much as the rest of the world seemed to be. But Smith started talking to her friends and together, they quickly organized. Before long, Smith found herself on a team of activists with Black Lives Matter Tokyo.

The group, which is not yet affiliated with the Black Lives Matter Global Network, began by planning a march through the city in June.

“Initially, the march was supposed to be in solidarity with the protesters in the USA."

“Initially, the march was supposed to be in solidarity with the protesters in the USA,” Smith said. But BLM in Tokyo also called attention to Japan's own issues with anti-Black racism.

Related: The dangers of saying #MeToo in Japan

The BLM Tokyo team got a permit for about 300 people, but they expected about 1,000 protesters.

The crowd far exceeded that estimate.

Over 3,000 people showed up, including Japanese and non-Japanese people alike, both Black and white. They held signs with both English and Japanese characters, saying, “Discrimination is born from ignorance” and “Black Lives Matter.” Smith, the vice-chair and lead designer of BLM Tokyo, said the group made fliers with suggested chants translated into Japanese. Some translated directly, like “I can’t breathe.” But other calls, like “Black Lives Matter,” required a slight change in structure.

“The more literal translation is: ‘The lives of Black people have to be protected,’” Smith said.

The march ended up being the largest-ever in Tokyo’s history. But a backlash formed in response to the rallying cries and hashtags. Critics accused marchers of ignoring the coronavirus risks and online commenters argued that racism is an American issue — not a Japanese one.

“I’ve had strangers reach out and grab my hair. Strangers yell kusai — like, ‘stinky’ — at me on the street. Also, my first week in this area, I got stopped by the police because I had a new bike.”

"That’s not true,” Smith said, emphasizing that Japanese society isn't always so tolerant or sensitive to concerns about race. “I’ve had strangers reach out and grab my hair. Strangers yell kusai — like, ‘stinky’ — at me on the street. Also, my first week in this area, I got stopped by the police because I had a new bike.”

Author Baye McNeil has faced similar situations while living in Japan. McNeil, a Black American who has lived in Japan since 2004, says people have avoided him as though “fleas might jump off of you onto them.” Still, that’s different from the racism he’s seen in the US.

“In Japan, it’s mostly still just fear. There’s not much hate when it comes to Blackness. It’s just fear, and the fear comes from ignorance."

“In Japan, it’s mostly still just fear. There’s not much hate when it comes to Blackness. It’s just fear, and the fear comes from ignorance,” he said. McNeil’s writing has focused on dismantling that ignorance for years, beginning with his blog “Loco in Yokohama,” where he wrote about Black issues in Japan. In 2014, McNeil also started writing a column called “Black Eye” for The Japan Times newspaper.

McNeil has often written and spoken out about the use of blackface in Japanese media. In 2009, Japanese actor Koichi Yamadera appeared on a popular variety show to perform Louis Amstrong’s classic "What a Wonderful World." Yamadera performed in full blackface, yet received nothing but applause from a totally unperturbed Japanese audience.

In 2017, a Tokyo production of the musical “Memphis” featured a cast of almost entirely Japanese performers in blackface. And a New Year’s Eve episode of a widely-viewed TV show featured celebrity comic Hamada wearing a Detroit Lions football jacket, a curly wig and blackface. He was said to be impersonating Eddie Murphy’s character from the 1984 movie “Beverly Hills Cop.”

Note to japanese performing in #BlackFace: #Blackness is not a punchline nor a prop. Need jokes? Get better writers. Need a black character, get a black actor that speaks Japanese. There are several! But please #StopBlackfaceJapan #日本でブラックフエイス止めて not a good look! pic.twitter.com/lN0E3bWsgY

McNeil criticized this broadcast on Twitter. While some defended the show, thousands supported McNeil’s comments. Since then, there hasn’t been another display of blackface in mainstream Japanese media. But racist imagery continues to be pervasive.

This summer, degrading depictions of Black people appeared on Japan’s public broadcaster, NHK. An animated segment was reportedly meant to explain to Japanese audiences what was happening in the US regarding the Black Lives Matter movement. But the show was steeped in racist imagery and reduced protesters to demeaning stereotypes.

McNeil says the report is the epitome of Japanese ignorance.

NHK later apologized and took the clip offline. The company also invited McNeil to discuss the offense at their office. McNeil says he felt like the station was listening to him for the wrong reasons.

“I think they were listening for damage control,” he said. “What can we do so that Black people don’t get angry at us, which is going to make us look bad in the media?”

NHK said in a statement that they “lacked awareness of whether the description in the clip was appropriate, and how it might be received in and outside Japan.”

Ignorance and a lack of education on Black issues is a real problem in Japan, according to Kaisei Sugawara, a 25-year-old Japanese man who grew up in a region near Tokyo. He joined marchers in the city this summer and has been posting about the movement online. But Sugawara says he didn’t know anything about anti-Black racism until he moved to the US to go to college.

“And then, while I was there, I heard about Eric Garner,” Sugawara said. Garner’s case has stuck with him, and since returning home, he’s been talking about racial justice with his friends. He says it’s easier to talk about it with his Japanese friends who also have lived in the US.

“I think they think they’re [closer] to the problem,” Sugawara said. “They know what’s going on in the US.” 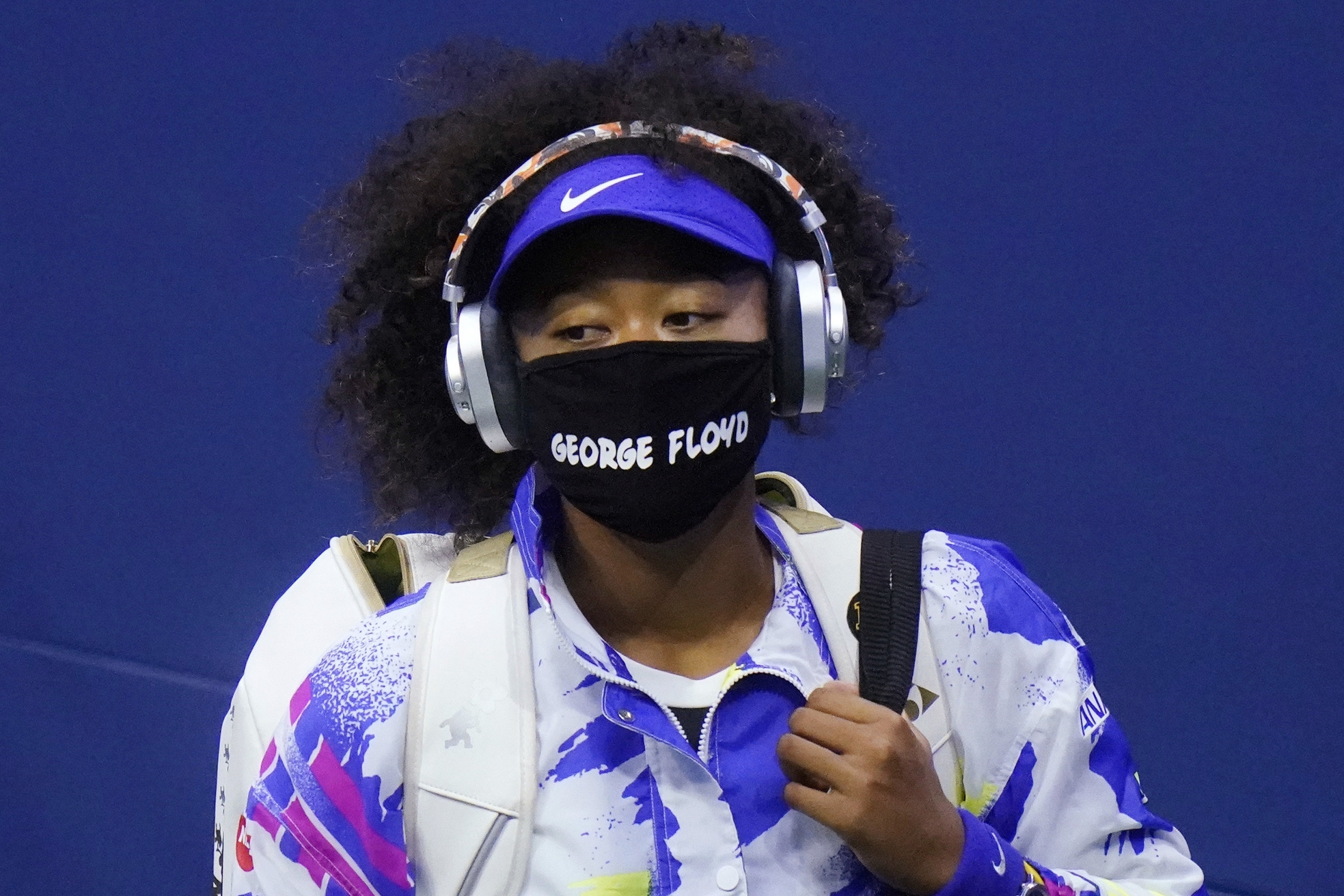 Naomi Osaka wears a protective mask due to the COVID-19 virus outbreak, featuring the name "George Floyd," during the quarterfinal round of the US Open tennis championships, Tuesday, Sept. 8, 2020, in New York.

But even his Japanese friends without US experience are curious about the Black Lives Matter movement. This week, many are paying close attention to Naomi Osaka, the tennis phenom with a Japanese mother and Haitian father who won the US Open after making headlines for wearing masks with the names of victims of racial violence.

In a press conference, Osaka said, “the point is to make people start talking.”

That mission is in line with that of Black Lives Matter Tokyo, according to Smith, who says the organization wants to unite Black and Japanese people.

“If we can get that across, then Japanese people might be willing to speak up for us more in places where we cannot,” she said. “Because we’re all one community.”

On the whole, Smith loves living in Japan and is dedicated to helping create lasting change. She isn’t planning to leave anytime soon.