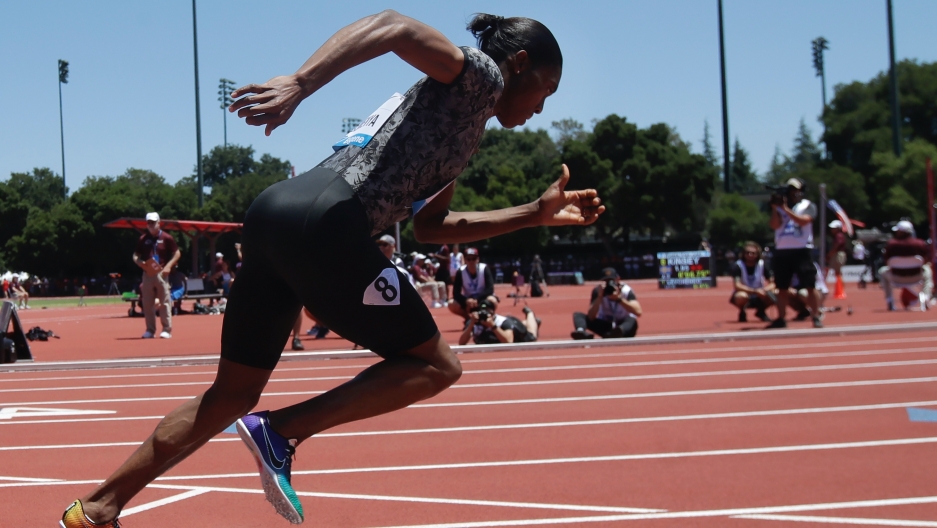 South African Caster Semenya won the 800-meter run at the Rio Olympics in 2016.

But a ruling from the Swiss Supreme Court on Tuesday means Semenya won't get to defend her title at next year's Olympics unless she takes medication to lower her testosterone levels.

Semenya, a two-time Olympic champion, has a genetic condition known as hyperandrogenism that elevates the level of male sex hormones in her body. A new rule instituted in 2018 by World Athletics, an international governing body, disqualifies her from competing internationally because of that condition. Semenya has been fighting that rule since it was passed, and with Tuesday's decision, she lost her second appeal.

Semenya's longtime attorney, Gregory Nott, has said they may challenge the judgment in Swiss and European courts. He joined The World's host Marco Werman from Johannesburg.

Related: So what if some female Olympians have high testosterone?

Marco Werman: You've been at Caster’s side through this whole process. What's your reaction to this ruling?

Gregory Nott: Look, we were very disappointed, naturally, to get the ruling that we have. However, the past has shown us that 7% of CAS [Court of Arbitration in Sports] rulings have been overturned by the [Swiss] Supreme Court. And so the odds were stacked against us. Yes, we were disappointed. Were we completely flabbergasted? No.

Have you spoken to Caster? How is she feeling about this?

She's very positive. She spoke — this is her quote: “The doors are closed, but not locked.” And so, she sees an opportunity, whether it be legal means — alternatively, track means, athletic means — of still fighting back, still making her presence felt among competitors.

Tell us more about the 2018 rule about testosterone levels that triggered all of this. Why was that rule established in the first place?

Well, very simply put, it was seen as an advantage.

So, that particular ruling was to negate or try to create fairness within the complete section of runners under a women's race. And for that reason, a particular level — a cutoff, as it were, [was established]. Anyone above that level had to have hormonal or surgical interventions to ensure that their testosterone levels were dropped.

Now, one would argue, did [Michael] Phelps have to have his feet cut off because he had bigger feet than the other swimmers?

[Caster] was born as a woman. And she has she competed as such.

Is that your argument, when you initially appealed that rule on behalf of Castro, that she was born this way, that she is female?

Well, partly. And a large part of the appeal was the human dignity and human rights of Caster, and the effects of these regulations upon her dignity, upon her self-image and a whole variety of other human rights issues as well.

What are Caster Semenya’s options at this point? And is taking this medication to lower her testosterone in order to qualify something she's considering?

She's absolutely strong-willed, and there's absolutely no way that she will take any medicine or hormonal interventions at all, physically.

She testified as much and she said as much publicly. So you won't find her doing that. No.

You've been representing Caster pro bono. Why is her case important to you? Why do you continue to fight for her?

I see the will of Caster. I see her indomitable spirit. I see her as a person, as a human being. And I think that really strikes a chord. It resonates, and I identify with her in so many ways. I see the love of our country for her.

You know, the one thing I really hate are bullies and I've always hated them — since I was a young schoolboy. So, I can't stand it, and I don't like the lean on her. Quite frankly, I've seen the lean on her since I first represented her 10 years ago, and that really riles me up. And you know, I was involved in activist law many years ago, decades ago. And it’s within my very being. And Caster, for me, resonates.

And she's not only a client, but a family friend, and part of the family. So, for me, I'm very passionate about her. I love the way she holds herself and carries herself. And if you knew South Africa, and where she came from, and the fight that she's actually had to do and take, [that] would be an extraordinary story that she has told. And it deserves telling, because there's such an example for others and not only others in South Africa, but others who want the opportunity — and the rest of the world. You want to see justice done at the end of the day and you want to see fair play. So, there is a sense of being robbed.