On a recent evening in the Castilian town of Añover de Tajo, about 40 minutes from Madrid, bullfighting aficionados gathered wearing masks and offering elbows in greeting.

It was one of the few chances that Leandro Gutierrez, a 22-year-old Colombian, has had to take on a bull this year. Gutierrez is a novillero, the grade of a bullfighter who kills young bulls of around 800 pounds. He aims to graduate to become a full-blown matador, who tackles half-ton adult bulls.

After three months of total lockdown ended in June, the vast majority of bullfighting events scheduled for this summer were canceled due to the COVID-19 pandemic. Spain has just become the first country in Europe to register half a million coronavirus cases, leaving bullrings empty and toreros, or “bullfighters,” out of work.

On the street and in the Spanish press, many are asking if this is the final blow for bullfighting, which was already steadily declining in popularity over the last decade.

Despite the gloom hanging over the industry, a small number of bullfights are still going ahead. The organizers are supposed to enforce social distancing and only sell every other seat in bullrings.

“There are young men who decide to abandon their family, friends and their whole world to come to Spain with nothing. It’s admirable. In Leandro’s case, he left everything behind to achieve his dream."

Mariano Aliaga, director of a bullfighting school in Navas del Rey, tells The World he’s watched Gutierrez’s progress with admiration. “There are young men who decide to abandon their family, friends and their whole world to come to Spain with nothing. It’s admirable. In Leandro’s case, he left everything behind to achieve his dream,” he said. 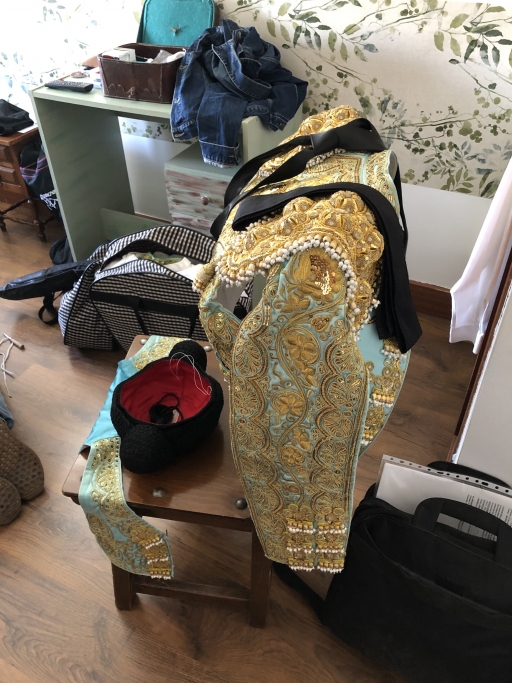 But Aliaga knows bullfighting is in trouble. The Spanish state has so far refused to bail out the industry, and students like Gutierrez struggle to find part-time work without the income bullfighting would bring.

Aliaga believes bullfighting is much more than just a tradition. “In my opinion, Spain would lose one of its hallmarks — one of its brands — and part of its identity,” he added.

A poll in May found almost half of Spaniards want bullfighting banned. A total of 2,218 bullfights were staged in 2008, according to government figures, but in 2018, the most recent figures available, that number had fallen to 1,521. A significant chunk of Spanish society is indifferent to bullfighting, while not in favor of a ban. Soccer remains far more popular.

Watching the bullfight, it’s not hard to see why it’s divisive.

When Gutierrez steps out into the ring with several other men, he faces a confused-looking black bull. First is the warm-up. Men on horseback stab the animal with spears to weaken him. More arrive on foot to lacerate him with banderillas, sharp sticks festooned with colors and stabbed into the bull’s back. The bull runs around the ring, exhausted and bleeding, chasing his tormentors. 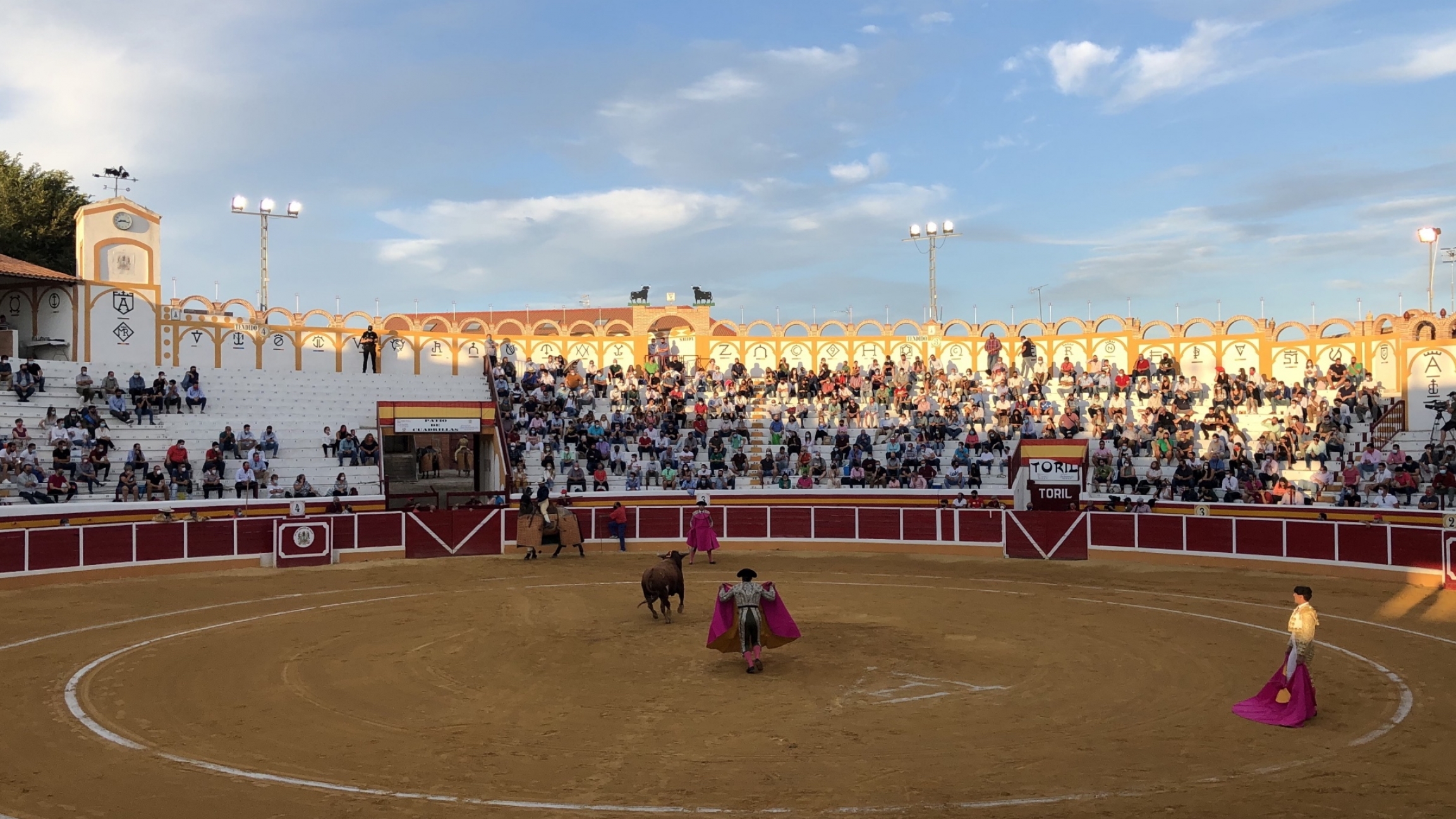 The first stage of the bullfight, Sept. 1, in Añover de Tajo, Spain.

The crowd goes wild as he brings the bull close — very close — with his bright red cape. He deftly directs the bull left and right, occasionally pausing to bow to the applauding audience.

At one point, Gutierrez slips, loses his shoes and rolls away — with just a scratch from the bull’s horn.

After 30 minutes, the bull’s whole body is heaving as he tries to breathe, and he stops in front of the bullfighter. Gutierrez draws his sword and plunges the blade between the bull’s shoulders once, twice, three times. The bull starts to bleed from the nose but takes a long time to collapse and die.

Judging by the noise of the crowd, it’s a triumph. Gutierrez’s performance is rewarded with two ears cut from the dead bull — an honor.

“It was great, it all went just like I had dreamed, so I’m feeling very happy,” he told The World afterward. 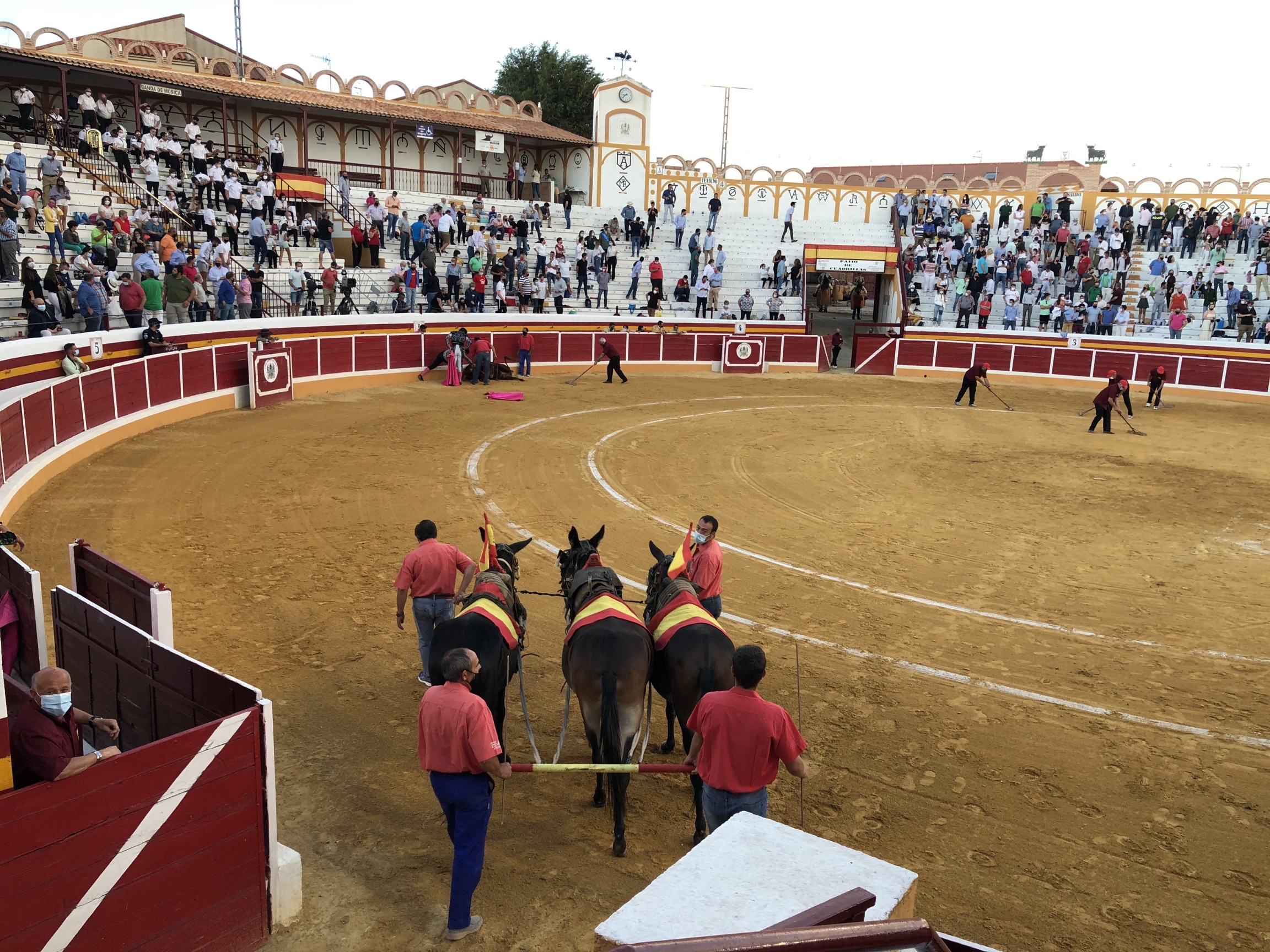 Horses are dispatched to pick up the body of a dead bull, Sept. 1, in Añover de Tajo, Spain.

But the date of Gutierrez’s next bullfight is unknown, and he needs to succeed in two dozen more to qualify as a matador.

In Spain, bullfighting is considered an art — not a sport — worth $1.8 billion, according to industry experts. That’s partly due to the value of the bulls. Prized toros bravos, the breed used for fighting, can be worth around $20,000 each.

“The problem here is that I have zero income, but the bulls still have to eat. I have the same costs but my income is gone."

At his farm in Villardiga, western Spain, Antonio Boyano raises 120 bulls at a cost of $1,200 each per year.

“The problem here is that I have zero income, but the bulls still have to eat. I have the same costs but my income is gone,” he said. Boyano can survive a few more months, but others have already given up. At least 6,000 bulls destined for bullfights have been slaughtered already this year. Boyano believes that without intervention, the toro bravo breed will die out, as it’s not usually used for meat.

“I really hope that this is the end. ... We were expecting the end to come sooner or later because people are just more and more aware of it. And there's only so much that you can use the excuse that it's tradition and it's culture."

Of course, for those who have campaigned for years to end bullfighting, the virus has become an unexpected ally. Theodora Iona, a campaigner for animal rights group PETA (People for the Ethical Treatment of Animals), held protests for years at the running of the bulls in Pamplona, but 2020 was the first year the popular tourist event was canceled.

“I really hope that this is the end,” she said. “We were expecting the end to come sooner or later because people are just more and more aware of it. And there's only so much that you can use the excuse that it's tradition and it's culture,” she said.

Now there are debates about whether bullfighting should be included in new animal protection regulations in Spain. However, bullfighting has been threatened with bans and financial crises many times in the last 300 years.

Perhaps a pandemic will achieve what hundreds of protests have not.