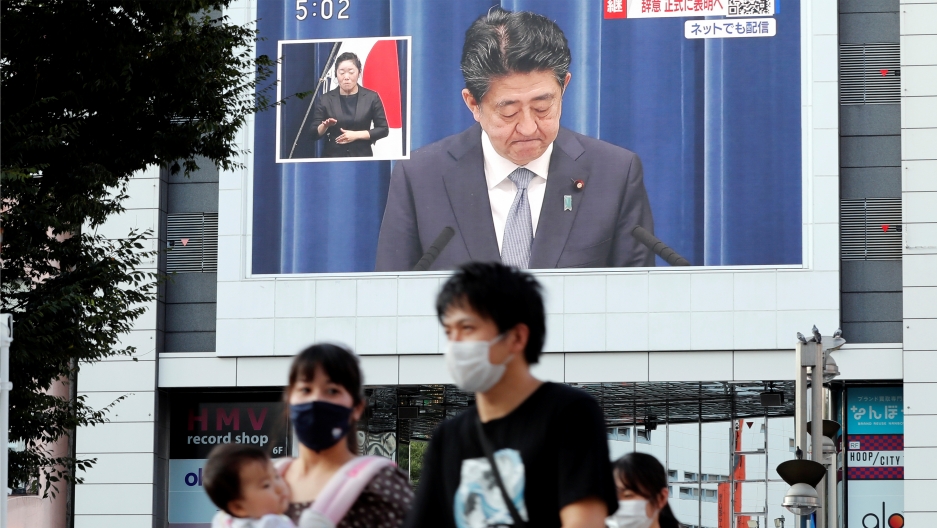 People walk past a large screen in Tokyo, Japan, broadcasting the news conference of Japanese Prime Minister Shinzo Abe where he announced his resignation.

Shinzo Abe, Japan’s prime minister, said on Friday that he was resigning due to health concerns. Abe addressed the county and announced that the return of chronic ulcerative colitis — an inflammatory bowel disease that has afflicted Abe since he was a teenager — had rendered him unable to continue leading the country amid the pandemic.

The country’s longest-serving leader had provided Tokyo with political stability during his eight years in office. Abe, 65, brought Japan back from a catastrophic tsunami and nuclear disaster. He also improved the economic situation considerably and cozied up to US President Donald Trump on the other side of the Pacific Ocean.

His resignation, which comes a year before the end of his term in September 2021, creates fresh uncertainty in Japan. Abe did not announce who might be replacing him as prime minister, but he is expected to remain in the position until his Liberal Democratic Party elects a new leader.

Russian President Vladimir Putin has warned protesters in Belarus not to push too hard to depose their embattled strongman leader, Alexander Lukashenko. Putin said that Russia has already formed a special reserve security force — at Lukashenko’s request — ready to intervene if chaos continues in Minsk. However, Putin added that the law enforcement officers would not be deployed unless the “situation gets out of control.” Meanwhile, Belarusian police stepped up mass arrests of protesters who have been taking to the streets since Aug. 9.

Students in India are expressing grave concern about their government’s decision to proceed with admission tests for engineering and medical schools during the coronavirus pandemic. More than 2 million students are expected to take the exams, but many parents and opposition leaders have criticized the plan. They argue that the tests should be postponed until COVID-19 infection rates go down.

And in the US on Friday, about 50,000 people were expected at a criminal justice reform and racial justice rally at the Mall in the capital to coincide with the 57th anniversary of Martin Luther King Jr.’s “I Have a Dream” speech during the March on Washington. 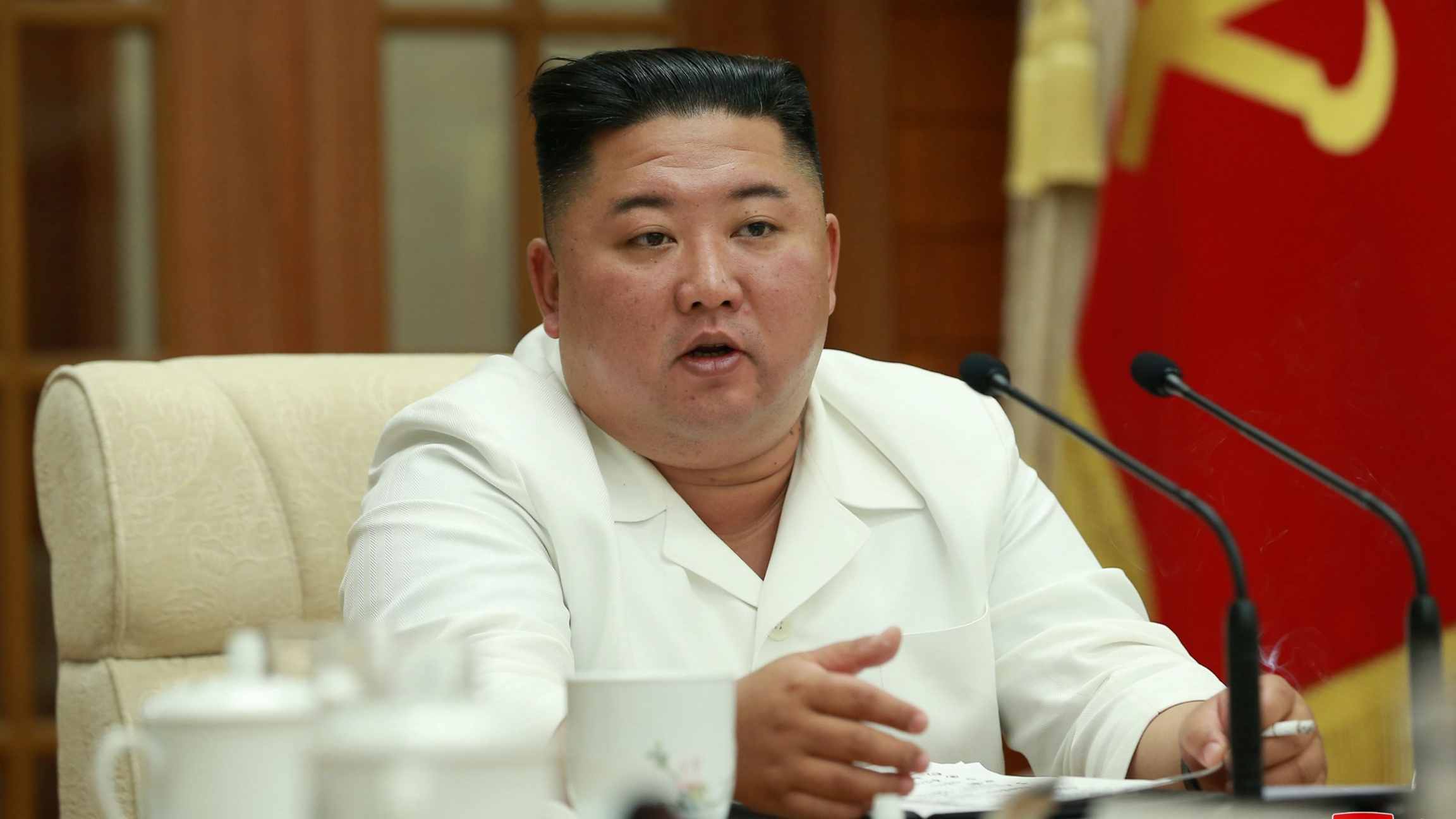 North Korean leader Kim Jong-un attends an enlarged meeting of the Political Bureau of the 7th Central Committee of the Workers' Party of Korea, in Pyongyang, North Korea, in this image released Aug. 25, 2020.

During the COVID-19 pandemic, Pyongyang has closed its borders, preventing aid groups from entering the country. And now, as North Korea attempts to recover from Typhoon Bavi and other recent weather events, the regime’s ability to effectively respond to disaster is curtailed due to the absence of these organizations.

According to state media, North Korean ruler Kim Jong-un recently instructed officials to refuse offers of foreign assistance, out of concern for bringing the disease into the country.

Are most white Americans guilty of 'supremacy' or just 'privilege'? 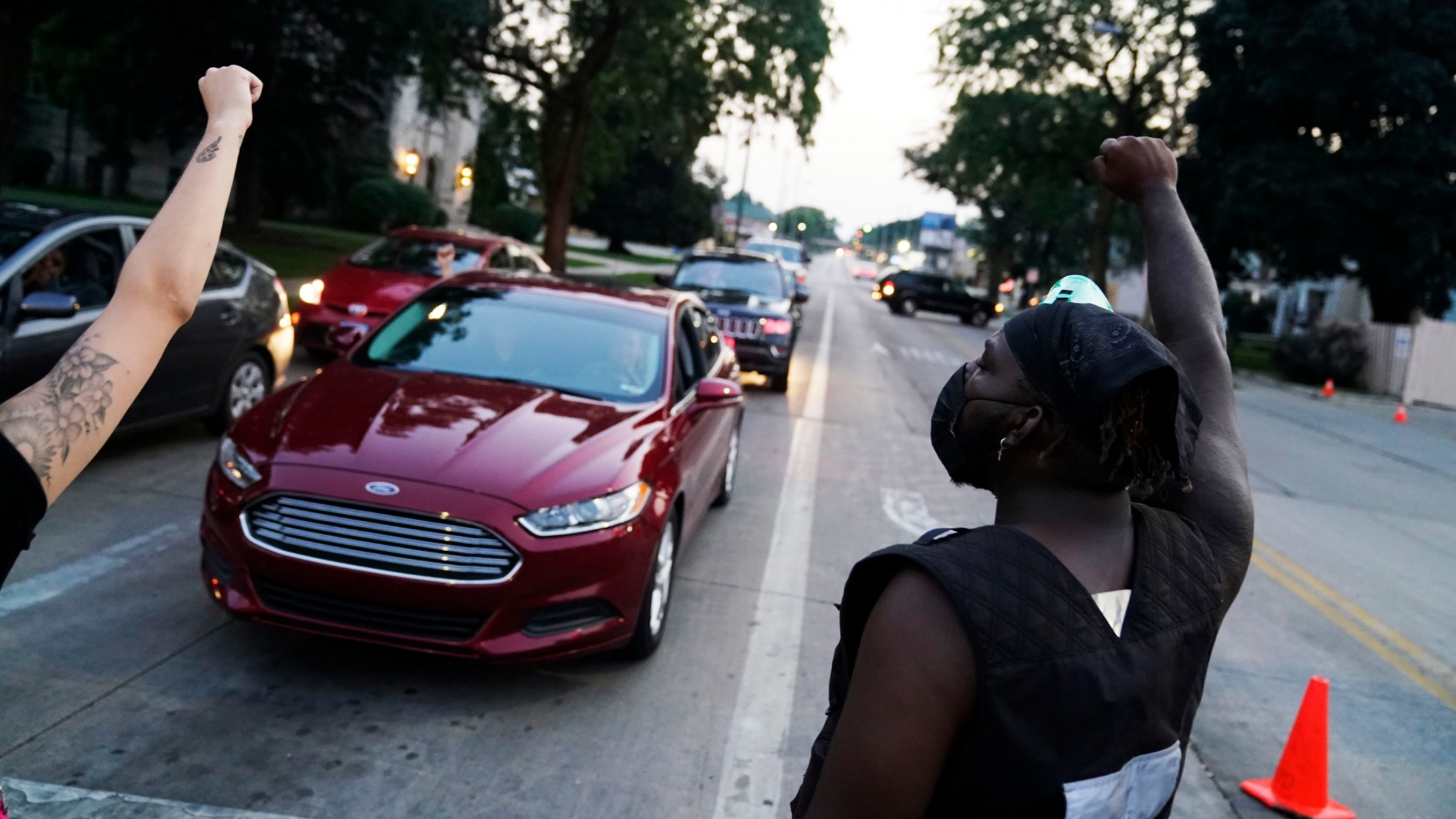 Protesters block an intersection while demonstrating against the Sunday police shooting of Jacob Blake in Kenosha, Wisconsin, Aug. 26, 2020.

The history of white supremacy is complex and the meaning of that term often disputed. But if people, by association, are part of a larger structure in which whites dominate, is it appropriate to call them "white supremacists"? The World's host Carol Hills spoke with Peniel Joseph, the founder of the Center for the Study of Race and Democracy at the University of Texas in Austin.

The University of Texas at San Antonio is home to the largest collection of historic Mexican cookbooks in North America — some dating back to the 1700s, including many handwritten manuscripts. Now, the library has compiled collections of recipes from these books and is releasing them online as free e-books so home cooks can discover them during lockdown.

Their first e-book in the series, “Postres: Guardando Lo Mejor Para El Principio” (“Desserts: Saving the Best For First”) is online now with recipes in English and Spanish. Other e-books focusing on drinks, appetizers and main dishes are forthcoming. 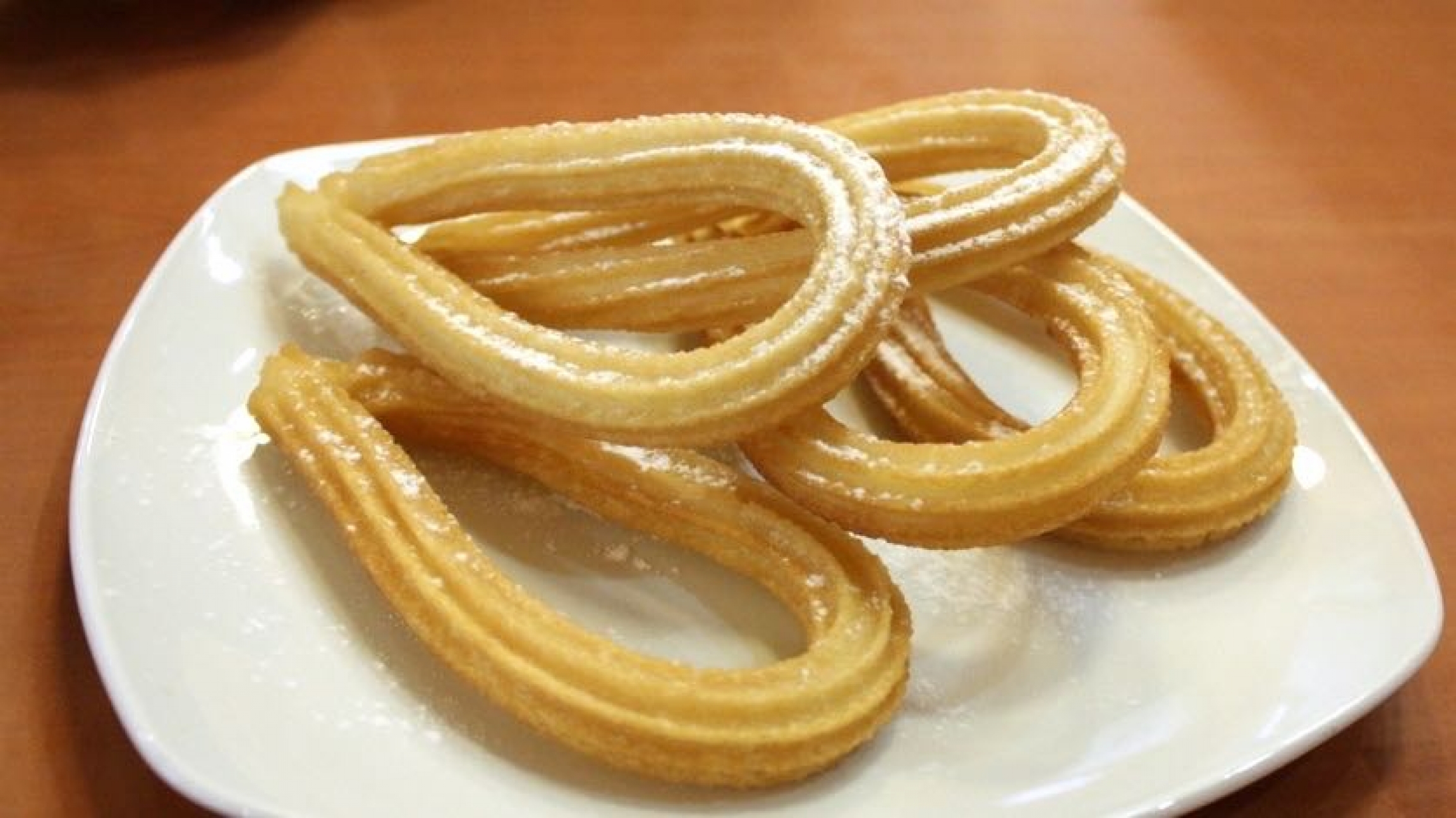 Churros served on a plate in a Madrid restaurant.

Arrest made over deaths of protesters in Wisconsin 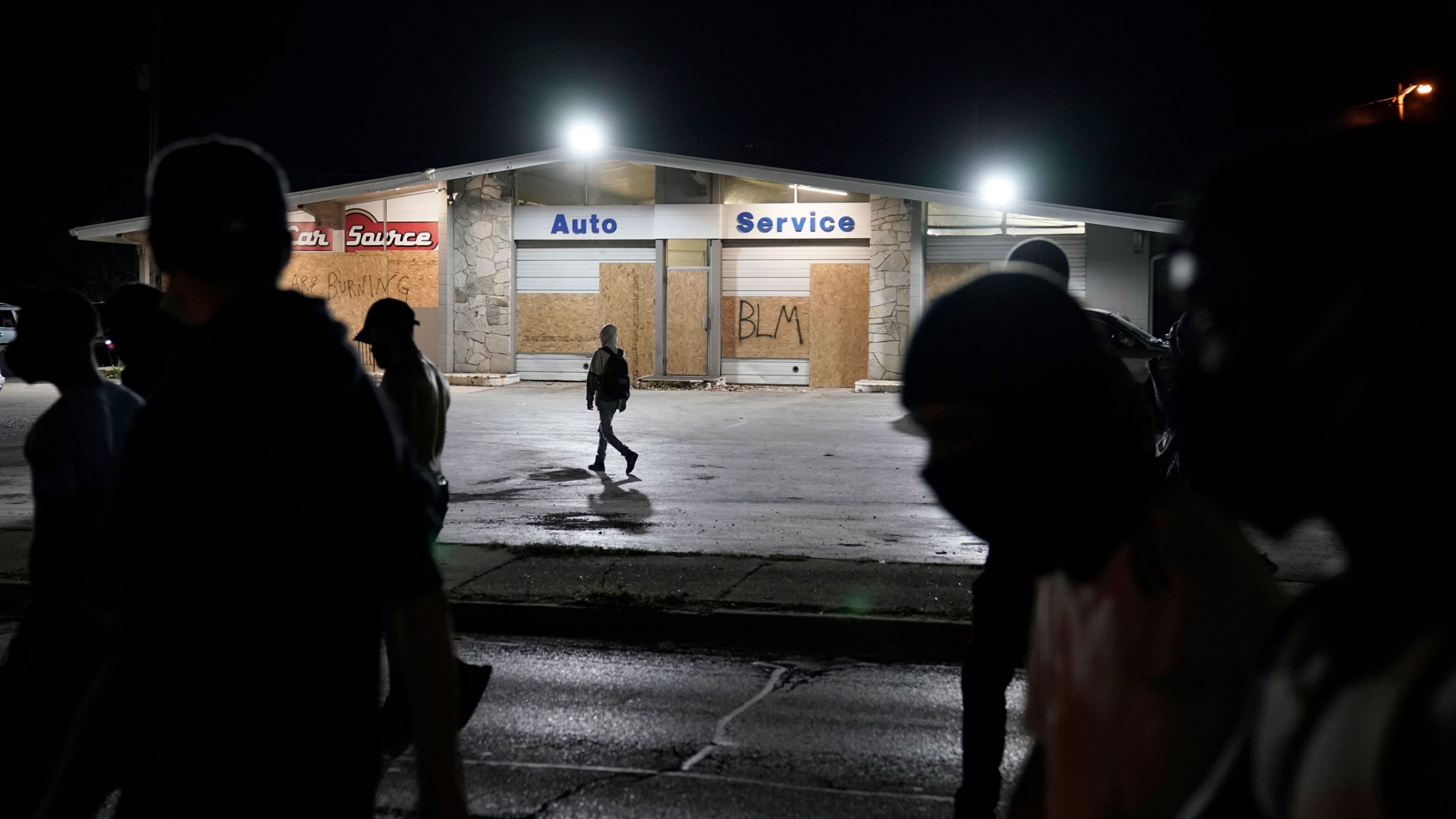 Protesters march to the site of a shooting in Kenosha, Wisconsin, Aug. 26, 2020. A white, 17-year-old was arrested after two people were shot to death during a third night of protests in Kenosha over the police shooting of a Black man, Jacob Blake.

Authorities have arrested a 17-year-old self-proclaimed militia member and charged him with homicide after two people were killed and another seriously wounded by gunfire amid demonstrations in Kenosha, Wisconsin, over the police shooting of Jacob Blake. And, the typhoon in North Korea, wildfires in the US and once-in-a-generation flooding in China all have a thread: climate change. Also, The University of Texas at San Antonio is home to a collection of more than 2,000 historic Mexican recipe books. During lockdowns amid the coronavirus, they are releasing collections of these recipes online as free e-books so that cooks can enjoy them at home.