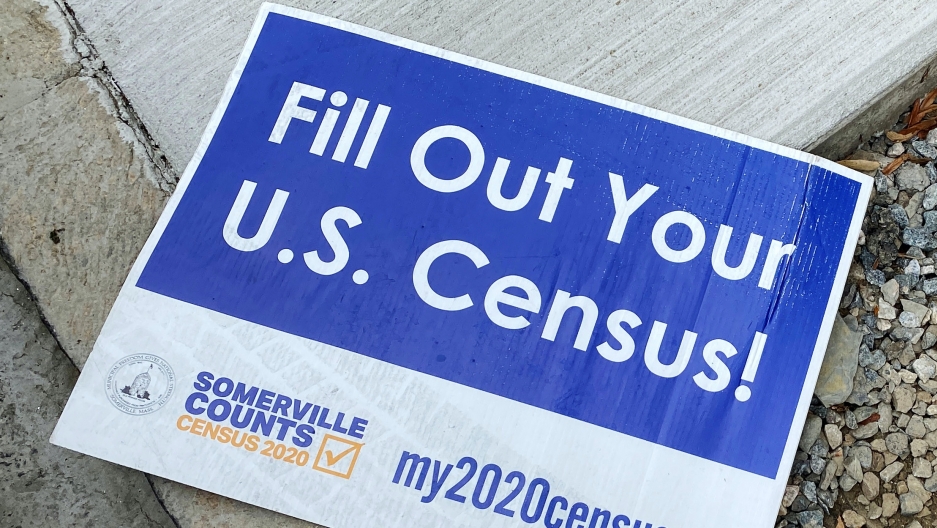 A sign encouraging participation in the US Census lies on a sidewalk in Somerville, Massachusetts, Aug. 4, 2020.

Filling out a census form takes just a few minutes. But it can be a frightening experience for many, including longtime US residents who are undocumented and afraid to be part of the tally because they’re worried that the US Census Bureau will share information about them with immigration officials.

Kenneth Prewitt, a former US Census Bureau director who oversaw the nationwide tally in 2000, says undercounts of groups including Black, Latino, Asian and Indigenous populations have long been a problem.

He worries that now, there is not enough time to count 56 million households, especially given the logistical nightmare of COVID-19. Some households are in hot spots where residents may hesitate to answer the door, he says. Enumerators may also not want to go into those neighborhoods. This may "result in an unprecedented undercount," Prewitt told The World.

Prewitt spoke with The World's host Marco Werman about his concerns that the bureau is ending the count at the end of September, one month earlier than census officials had originally planned.

"They were desperately fighting to get an additional four months for the census. They were supposed to at least go to Oct. 31. And they were told they were running a marathon. And suddenly they were told, 'Oh, sorry. It's really a sprint,'" Prewitt said.

Related: As Election Day nears, it's not just about winning the 'Latino vote'

Marco Werman: Do you have a sense of percentage-wise, how off the count could potentially be?

Practically, what happens if the census counts are off, and certain groups are under or overrepresented?

You have asked the biggest question that sits before us right now. We've never had a census, which, at the end of the day, we didn't say this is good enough to use. The Census Bureau knows how inaccurate they're going to be. They will say, you know, "We really missed this many people and we know we missed this many people," and so forth and so on. And we do not have rules for a census. What we do have are very high-quality standards. And if you read the legislation on these quality standards, you could come to the conclusion that the Census Bureau would have to say, "We don't meet those standards." Then we don't know what would happen, quite honestly. Does that mean the Census Bureau would not turn in the numbers? That's a possibility. Does it mean that we would open up the calendar again and give them another month? That's a possibility. Does it mean more money? I don't know what will happen.

What if it is way off? And suppose there's a new administration that takes the helm. Is a do-over possible?

Anything is possible. You've spent $15 billion, you would hope it would not be a do-over. You hope you would start from those cases, which you're very confident of, and simply go back to work and finish it up. Here's what I've asked to happen. I've asked for Congress to appoint a group of experts, scientists, statisticians to come up with predetermined metrics. And these metrics will be used to judge the quality of the census and put that in the hands of apolitical — like, the American Statistical Association or the National Academy of Sciences. Where really, they just want to get it right — determine its accuracy. And then we would know. We would have a process in place that would allow us to make that judgment as a country.