Ameneh Sharifi is a 2 ½-month-old baby with enormous dark eyes. In a video her father sent to The World, she wears a tiny white jacket and smiles as her aunt tickles her chin. Ameneh’s legs are also wrapped in bandages, a reminder of the horrific ordeal she went through in May when gunmen stormed the maternity ward of the hospital where she was born.

Related: Afghans in shock after attacks on a maternity hospital and a funeral

Rafiullah Sharifi, Ameneh’s father, told The World he was right outside the hospital when the attack happened. He tried calling his wife, 27-year-old Nazia, on her cell phone. But there was no answer. 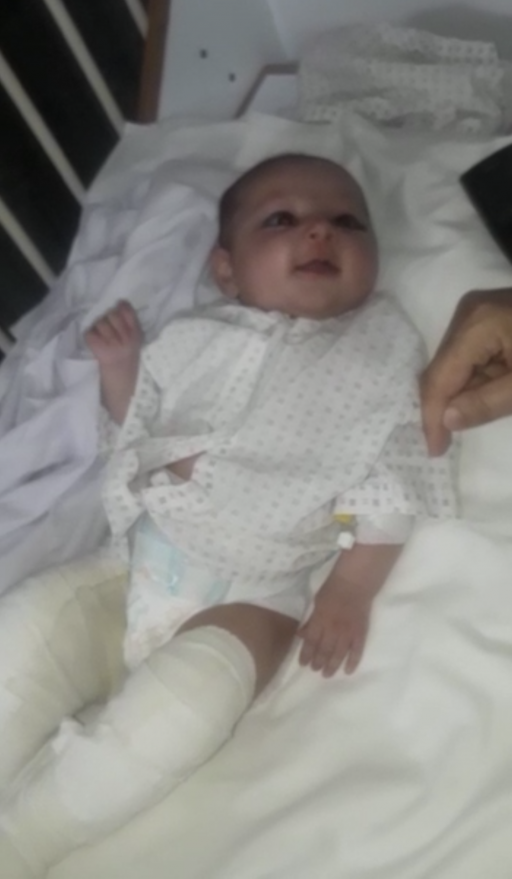 Two-month-old Ameneh Sharifi, her legs in bandages, smiles in a family video as she recovers following an attack May 12, 2020, at Dasht-e-Barchi Hospital in Kabul, Afghanistan.

Afghan security forces entered the hospital grounds and a gun battle ensued that lasted four hours. The gunmen were all killed.

In the aftermath, Sharifi searched frantically for his wife and their newborn. But he discovered that Nazia had died while holding their daughter in her arms.

Ameneh was rushed to two different hospitals in Kabul, Sharifi said. She had bullet wounds, and doctors said one of her legs would have to be amputated. But Sharifi wanted to get a second opinion, hoping it could be saved.

Related: 'Peace is the highest desire,' says Afghan ambassador to US

Ameneh was admitted to The French Medical Institute for Mothers and Children, a nonprofit hospital run jointly by the governments of France and Afghanistan, The Aga Khan Development Network, and the French nongovernmental organization La Chaîne de L’Espoir, or Chain of Hope.

“I got a call from the emergency room that the orthopedist surgeon was asking [for an] opinion,” recalled Najibullah Bina, head of the cardiovascular ward at the hospital.

He rushed to the emergency room and found Ameneh.

“I faced lots of horrible things in my career. ... I know lots of bad things but unfortunately I was shocked. Come on! An 11-hour-old baby! It’s terrible.”

“I faced lots of horrible things in my career,” he said, “I know lots of bad things but unfortunately I was shocked. Come on! An 11-hour-old baby! It’s terrible.”

Ameneh was in bad shape, Bina said. She had lost a lot of blood and the bullet had done serious damage to her leg.

Bina decided to try and save her leg. The first operation took four hours. It was one of the most stressful surgeries Bina and his team had performed, he said.

“There is not enough experience in such surgeries,” he said. “Nothing in the medical lecture. You find nothing. Nothing, nothing, nothing.”

Ameneh underwent several more surgeries. Doctors had to fix her bones, nerves and blood vessels. Finally, on Sunday, July 26, she was discharged from the hospital.

Long road to recovery — and justice

Bina doesn’t expect Ameneh to need any further major surgeries, but he said she will require regular check-ups and physiotherapy.

Now, her grandmother and aunt are taking care of her at home. She has two other siblings: a 3-year-old sister and a 5-year-old brother. Sharifi said they are slowly adjusting to this new life without Nazia, their mother.

So far, no group has claimed responsibility for the attack on the Dasht-e-Barchi hospital. Soon after the attack, Afghan President Ashraf Ghani visited survivors and promised a full investigation. But more than two months later, there are many unanswered questions about what happened and why.

"...With the war going on, other things happen and these things sort of fade from view or we never find out what has happened in terms of any investigation. That means that for a lot of the victims, they feel they don’t get any acknowledgment or any follow-up or any sense of justice.”

“What happens often is that there will initially be some rhetoric about, ‘Oh yes, we will get to the bottom of this and the perpetrators will be punished’,” said Patricia Gossman, associate Asia director for Human Rights Watch. “And then, of course, with the war going on, other things happen and these things sort of fade from view or we never find out what has happened in terms of any investigation. That means that for a lot of the victims, they feel they don’t get any acknowledgment or any follow-up or any sense of justice.” 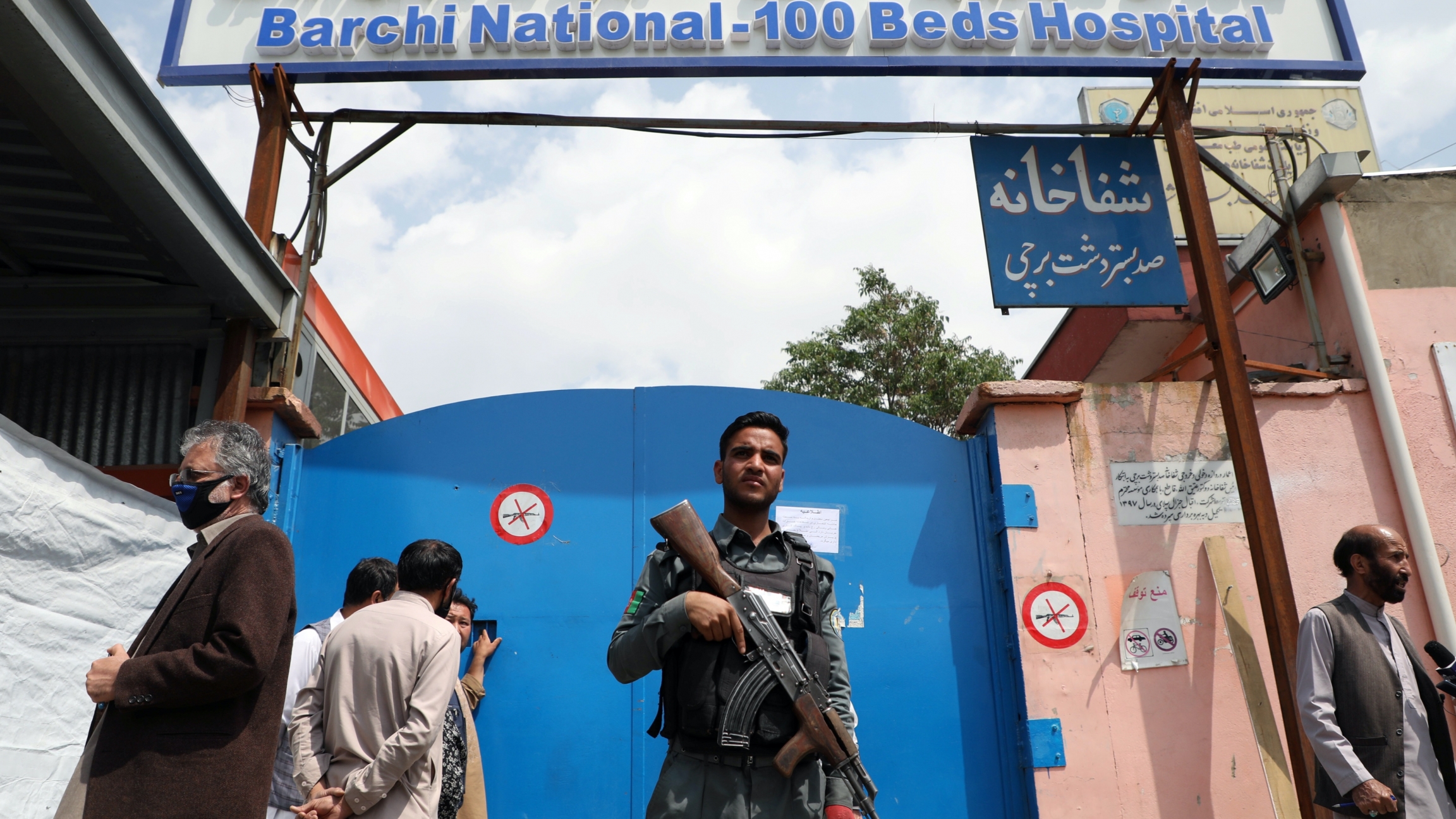 An Afghan policeman keeps watch outside of Dasht-e-Barchi Hospital which came under attack in Kabul, Afghanistan, May 13, 2020.

The attack has all the hallmarks of an operation carried out by ISIS of Iraq and the Levant—Khorasan Province (ISKP), according to Gossman, who has spent more than three decades working on Afghanistan and South Asia. But she said it is usually very difficult to hold members of the group accountable in Afghanistan's courts.

“The intel, evidence and initial findings suggest that Taliban and their aligned terrorist groups were behind it,” he wrote in a WhatsApp message. Asked when the results of the investigation will be made public, Faisal didn’t offer a timeline.

The Taliban has denied involvement in the attack. The spokesperson for the Afghanistan Independent Human Rights Commission did not respond to a request for comment.

Meanwhile, earlier this month, the Dasht-e-Barchi hospital, where the attack happened, re-opened. It is no longer run by Médecins Sans Frontières, which decided to end its operations there.

“We were aware that our presence in Dasht-e-Barchi carried risks ... but we just couldn't believe that someone would take advantage of the absolute vulnerability of women about to give birth to exterminate them and their babies.”

“We were aware that our presence in Dasht-e-Barchi carried risks,” said Thierry Allafort-Duverger, MSF’s general director. “But we just couldn't believe that someone would take advantage of the absolute vulnerability of women about to give birth to exterminate them and their babies.”

MSF’s head of programs for Afghanistan, Brian Moller, said that his organization is still waiting to hear the results of the Afghan government’s investigation.

“At the moment we have no further information regarding the motives or the perpetrators,” he wrote in a WhatsApp message to The World. Moller said the government has promised to share its findings with the aid group once they are available.

As for Rafiullah Sharifi, the father of the injured baby, he says he is spending time with his daughter at home. Playtime is their favorite, he said.

“My wife was innocent,” Sharifi added. “She would have been proud of how Ameneh is recovering.”