Ernestina Mejía knew people were getting sick all around her this spring. She heard co-workers coughing in the bathroom at work. Others whispered about colleagues looking feverish.

Mejía wasn’t surprised. She works at Primex Farms, a dried fruit and nut producer based in Wasco, California, about 130 miles north of Los Angeles. Mejía, who moved to the US from Mexico a decade ago, sorted pistachios indoors on an assembly line, working in close proximity to others. Primex offered them no masks, no gloves and no protection against the coronavirus, she said.

Then, in mid-June, Mejía fell ill.

“I started feeling shivers and a terrible cough that wouldn’t let me sleep,” she said in Spanish.

Mejía, along with her husband and youngest daughter, had contracted the virus. So did 99 of Mejia’s coworkers, or about a quarter of Primex’s 400-person workforce, according to a tally by the United Farm Workers, a farmworkers’ union. One of her Primex colleagues, Maria Hortencia Lopez, 57, died on July 13 from COVID-19, according to friends and the UFW. Meanwhile, Mejía said, Primex did not acknowledge that people were falling ill.

Horrified at the outbreak, Mejía and other Primex employees took part in a one-day strike in late June to protest what they viewed as their employer’s failure to protect them. They also demanded an investigation by the state’s attorney general.

Their situation highlights the tightrope farmworkers must walk to protect their health and jobs while avoiding retaliation from their employers. Within weeks, at least 40 Primex workers, many of whom were active in the strike, were terminated, former workers told The World. Others said they feared the same fate if they spoke up.

From the start of the pandemic, warnings were clear that farmworkers — deemed “essential” to the nation’s food supply and thus exempt from lockdown orders — would be at high risk for COVID-19.

From the start of the pandemic, warnings were clear that farmworkers — deemed “essential” to the nation’s food supply and thus exempt from lockdown orders — would be at high risk for COVID-19. Across the US, an estimated 2.5 million farmworkers often work in cramped spaces, carpool to work and live in crowded homes. Many are immigrants and refugees. They’re part of an industry where safety and labor standards are notoriously weak, but many workers cannot leave their jobs because they’ll fall into poverty. The stakes are even higher for undocumented workers, whose legal status leaves them vulnerable to immigration enforcement.

Related: Farmworkers are now deemed essential. But are they protected?

Now, those early warnings are bearing out as outbreaks are reported at farms and food processing plants across the US. In July, dozens of farmworkers at a dorm-style housing facility in Southern California tested positive for the coronavirus. In southwest Florida, Doctors Without Borders has noted high rates of infections among farmworker communities and is providing them with COVID-19 testing and virtual medical consultations.

Employers’ lack of disclosure to employees about workplace infections is not unusual. Jesse Rojas, a business consultant Primex hired to speak to the media on its behalf, told The World the company has been following official safety guidelines and has been “very proactive in communicating with employees.”

In a statement to the local ABC television station, the company attempted to distance itself from the possibility that its workers were infected on-site.

“Primex cannot control the circumstances or monitor what employees are doing outside on their own time,” it said. “Primex is known as one of the cleanest plants in the industry.”

Mejía, along with several current and former Primex workers, also said that the farm did not provide masks for several months as the coronavirus surged across the country. When it did, cloth masks were provided for sale on-site for $8 each.

“That’s not something we can afford,” said Mejía, who earns $13 per hour. In the end, she said she purchased handmade masks from a co-worker for $4 apiece.

“The company has never charged employees a dime for a face mask.”

“The company has never charged employees a dime for a face mask,” Rojas said.

Since the strike, Mejía, who is now back at work, said conditions at the processing plant have improved somewhat. For instance, employees’ work breaks are now staggered to avoid crowding. Masks and gloves are available for free.

“Things are better,” she said. “I just hope that they stay like that once the spotlight moves away.”

Yet, Mejia still hears people coughing at work. She knows her co-workers worry about missing a paycheck or losing their jobs. Many immigrant workers are blocked from unemployment insurance and have been left out of federal relief bills for the coronavirus.

Some US lawmakers are pushing for broader federal help — and more safety at farms. Rep. Jimmy Panetta, a Democrat of California whose district includes the heavily agricultural Salinas Valley, has co-sponsored bills that aim to loosen eligibility requirements so that workers, regardless of their immigration status, have access to financial aid during the pandemic. But those initiatives have not succeeded at the federal level. Panetta and others are pushing to reimburse farms for personal protective equipment, or PPE.

“We're basically doing our job and making sure that the funding is there so that they can have this PPE,” Panetta said. “You want to make sure that these producers are requiring that their employees wear the PPE.”

There are still no national mandates to protect workers — only nonbinding guidelines from the Occupational Safety and Health Administration. That’s a problem, said Armando Elenes of United Farm Workers, which supports the workers at Primex.

“They’re recommendations, not requirements,” Elenes said. “That makes it difficult to enforce because they have no teeth.”

Meanwhile, workers have paid a high price on farms that have been slow to protect them.

Another farmworker, Anastacio Cruz, who harvested white button mushrooms at a farm south of San Francisco for about 13 years, contracted the coronavirus this spring. California declared its shelter-in-place order in mid-March. But Cruz, who spoke to The World in Spanish, said he continued to work indoors without a mask and did not worry about the risks.

“You just think that nothing is going to happen, right?” said Cruz, who migrated to the US from Oaxaca, Mexico. 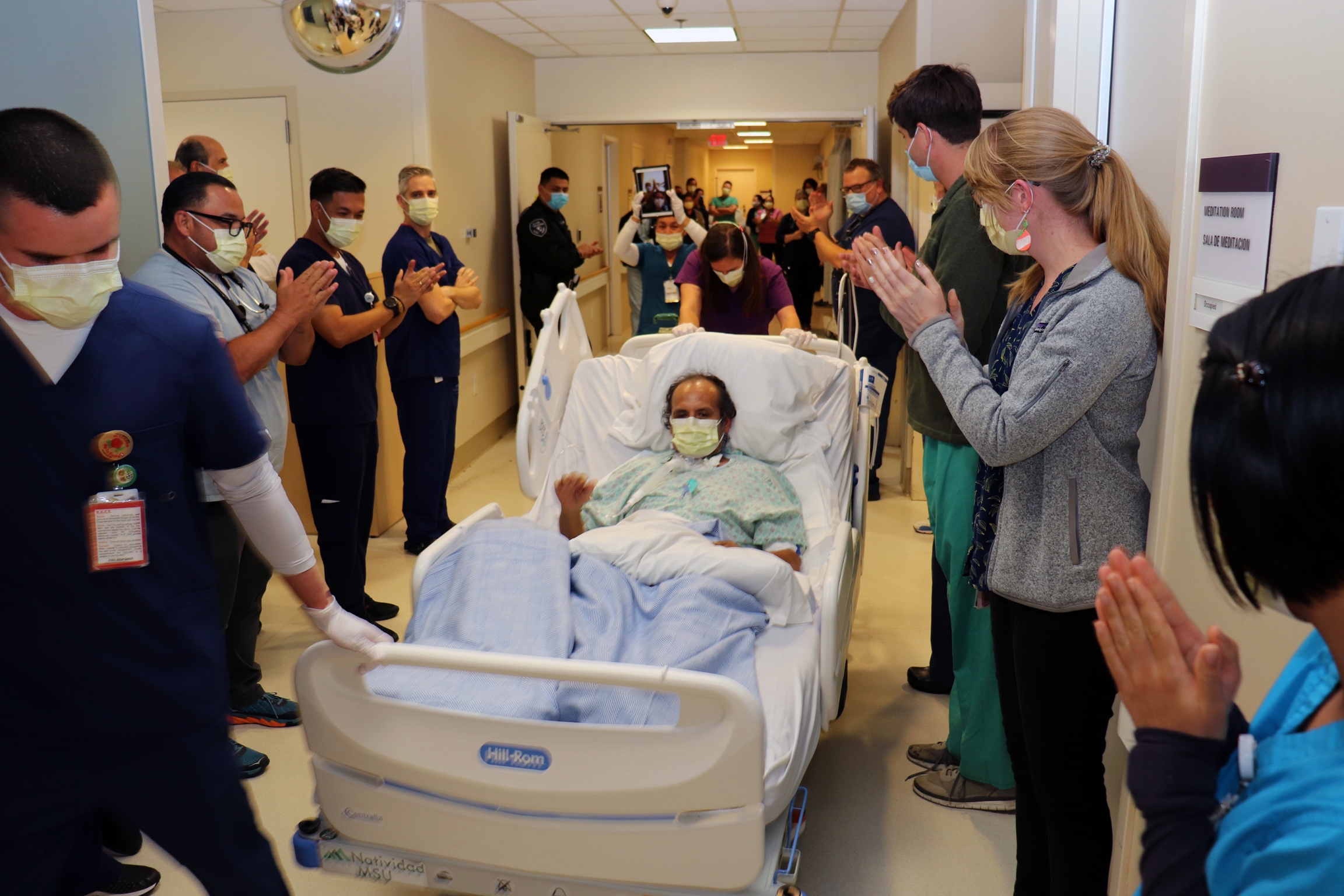 Anastacio Cruz, center, a farmworker, leaves Natividad Medical Center in Salinas, California, where he spent more than six weeks after contracting the coronavirus, on June 29, 2020.

Then, his body started aching. In April, he was hospitalized at the Natividad Medical Center in Salinas for 13 weeks. His youngest daughter, Isela, sat next to Cruz.

“It was a very hard situation and very slow progress,” she said. “He was, like, six weeks in a coma.”

His hospital stay included 50 days on a ventilator, during which Isela enrolled him in Medicaid. Cruz is now recuperating at home. During an interview over Zoom, he pointed to the small tubes pushing oxygen through his nose.

“I’m not sure when I will work again. I’m telling people to take care of themselves, wear the mask, so that people don’t go through this. It’s hell for the family.”

“I’m not sure when I will work again,” he said. “I’m telling people to take care of themselves, wear the mask, so that people don’t go through this. It’s hell for the family.”

Cruz did not want to name the mushroom farm where he worked, concerned it could hurt his chances of returning to his job. Though Cruz was laid off with two weeks’ pay, he said his employer told him he could come back.

Speaking up can be risky, as María Irma Escobedo knows all too well. After working for nearly two years sorting pistachios at Primex Farms, she was one of at least 40 workers whose jobs, facilitated through a staffing agency, were terminated. Many of those terminated were active in the workers’ strike and said they received no warning they would be let go.

“I know this was retaliation against us,” Escobedo said. “Now, we’re out of work. My only source of income. And this was my fear from that start, that this would happen for speaking out.”

The United Farm Workers said it will file charges with the National Labor Relations Board alleging Primex failed to protect them and illegally retaliated against them for protesting.

Rojas, speaking on behalf of Primex, told The World the staffing cuts are based on usual seasonal reductions. He did not answer questions about year-to-year comparisons or allegations by Primex workers and the UFW that new people are being hired to work at the plant, sourced by another staffing agency, to replace the workers recently let go.

Escobedo said that she will continue to fight back, albeit from home.

In June, she tested positive for COVID-19 and was hospitalized for three days, she said. She is still recovering.