But the island nation of Cuba stands out as one of the hemisphere’s leading success stories in battling COVID-19 — at least so far. Cuban officials have not reported any new COVID-19 deaths for two weeks. Since the pandemic began, Cuba, home to some 11.2 million people, has recorded only 87 fatalities and about 2,500 total cases.

Although some on the island find the news too good to be true, even Cuba’s fiercest critics say it has made big strides in combating the coronavirus. The country credits its free, neighborhood-based health system with helping contain the spread.

At the same time, Cuba has seen renewed public attention around police brutality — parallel to protests taking place around the world. And despite top-down government efforts to silence dissent — often against the backdrop of coronavirus restrictions —  activists say they are making some headway.

The government’s orders to fight COVID-19 call on residents to welcome health care workers who show up at their homes. Tens of thousands of medical students, doctors and nurses have been going door-to-door to take temperatures and try to spot the coronavirus cases before they spread.

Every person who tests positive for COVID-19 in Cuba is hospitalized, even if they are asymptomatic. 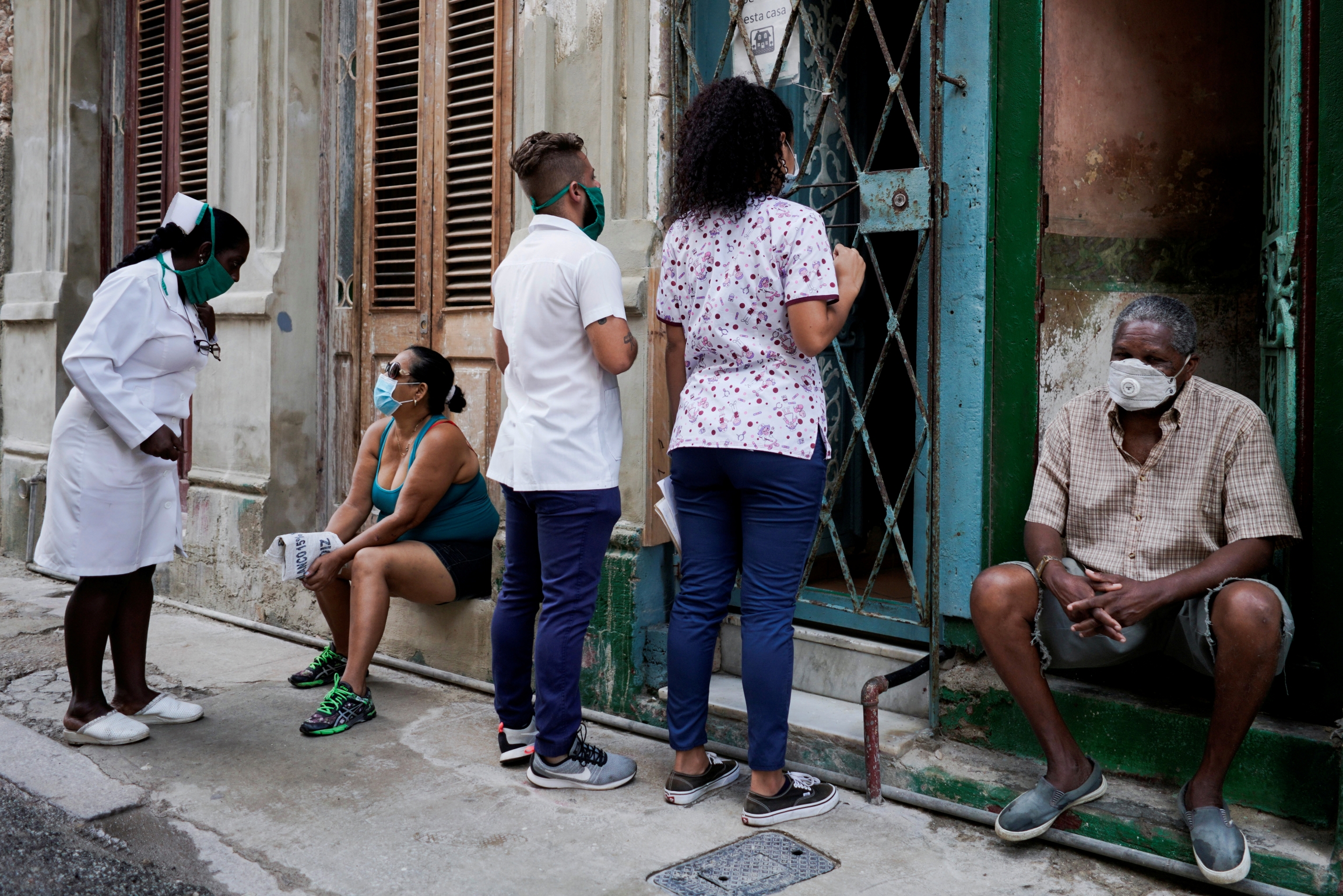 Medical students check door-to-door for people with symptoms amid concerns about the spread of the coronavirus disease (COVID-19), in downtown Havana, Cuba, May 11, 2020.

In Cuba, these house calls aren’t unusual. It’s how the island has tackled other viral outbreaks, such as dengue fever. The country has an ample supply of doctors. It boasts more than eight physicians for every 1,000 people, one of the highest ratios in the world, according to World Bank data. The US, by comparison, has less than three physicians for every 1,000 people.

Collin Laverty, who studies US-Cuba relations from his base in Havana, says no one in Cuba is second-guessing its coronavirus strategy. A medical student shows up at his door every week.

“Things that have become debates in other places in the world, like whether you should wear masks, what that means for your freedom, whether people should be tested, or they should remain at home or be treated, none of those things were debatable,” said Laverty, who also runs an educational travel agency.

Not wearing a mask in public can mean a fine in Cuba. In some instances, after multiple offenses, it can lead to jail time. One televised case featured a young man who’d been stopped by police twice for not wearing a mask. The judge sentenced him to a year in prison, citing federal laws enacted to prevent the spread of contagious diseases like COVID-19.

Tanya Bruguera, a well-known activist and artist in Cuba, says laws created to contain diseases like the coronavirus are also being used to target critics of the government.

“There have been cases where members of the opposition have the mask, but maybe they take off the mask for a second to smoke or something,” Bruguera said. “It almost feels like [Cuban authorities] are waiting for them to do that because immediately they come and they put them in prison because they have wrongly [worn] the mask.”

Bruguera says activists like her have faced increased harassment since the pandemic began. But she says critics of the government have still managed to pry open new space for protest using social media.

“Social media has become the most feared space for the government because they cannot completely control it.”

“Social media has become the most feared space for the government because they cannot completely control it,” she said.

The explosive power of social media in Cuba was evident in June, when Cuban police shot a young Black man, Hernández Galiano, in the back. Authorities say he was running away from a robbery; others say police were trying to stop Galiano for not wearing a mask.

Some are calling the case Cuba’s “George Floyd moment.” Hernandez’s aunt posted a photo of her nephew in a coffin on Facebook and demanded justice.

Activists like Bruguera were stunned by the response of ordinary Cubans on social media.

“This small post, put by somebody nobody knew, became so viral that the government could not ignore it anymore and had to talk about it on the news,” she said. “The whole [population of] Cuba knew that there was police abuse.”

And Cubans are increasingly using their phones to film that abuse. A Facebook post from June shows a crowd shouting down a policeman who had grabbed a man by the neck in downtown Havana. Activists say the man was criticizing the government when he was apprehended.

Bruguera herself was detained by police just a few weeks ago on her way to a protest. She’s unfazed: It’s happened to her many times before. And now, she says, there are many more protests happening in Cuba — on the streets and online.

“We are living a very special time where activists are actually winning over and in a way imposing or forcing the government to become democratic,” Bruguera said.