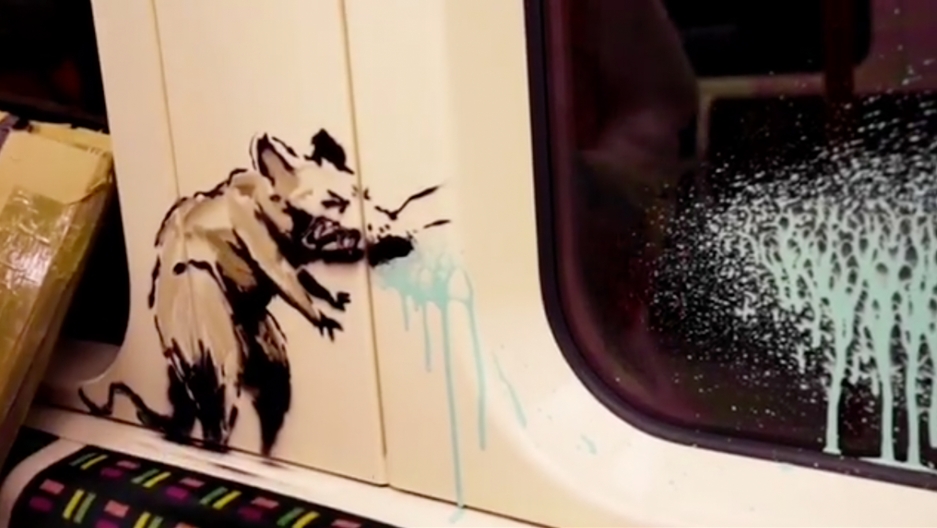 Editor’s note: Transport for London (TfL), the government body that manages the transport system in London including the London Tube, has confirmed that Banky’s artwork was removed as it violated TfL’s “strict anti-graffiti policy.”

Banksy has done it again. This time the British artist and activist has created a piece of his signature art focused on mask-wearing during the coronavirus pandemic.

His latest work, titled “If you don't mask - you don't get,” is set in London's Underground. A video posted on his Instagram account on Tuesday shows a man, believed to be the enigmatic artist, disguised as a member of the cleaning staff and wearing a hazmat suit.

He boards the train and instructs some of the passengers to move away. He proceeds to stencil rats on the inside of a train carriage. Some rats are wearing face masks or using them as parachutes. Another appears to be sneezing, and another is holding a bottle of hand sanitizer.

At the end of the video, he sprays the words, “I get lockdown, but I get up again,” riffing off Chumbawamba’s 1997 hit “Tubthumping.”

The work comes as the British government has gone back and forth on its approach to making face coverings in public places compulsory. Face masks have been mandatory in the London Tube since June 15. Starting on July 24, shoppers in England will have to wear face coverings in stores and supermarkets to help reduce the risk of a new surge of the coronavirus, Prime Minister Boris Johnson's office said.

Johnson said last week that tighter rules on wearing face coverings might be needed. But a senior minister — Cabinet Secretary Michael Gove — said on Sunday that wearing masks should be left instead to people's common sense.

Banksy has not been silent during the coronavirus pandemic. Back in April, he alluded to the coronavirus lockdown with a piece featuring stenciled rodents in different parts of his house. He posted a photo on Instagram with the caption, "My wife hates it when I work from home."

The street artist also published a piece in honor of health workers titled “Game Changer,” which depicts a child playing with a cape-wearing nurse superhero toy. In a basket, on the floor nearby are figures of Batman and Spiderman. The nurse is also shown wearing a face mask and a white apron embellished with a red cross.