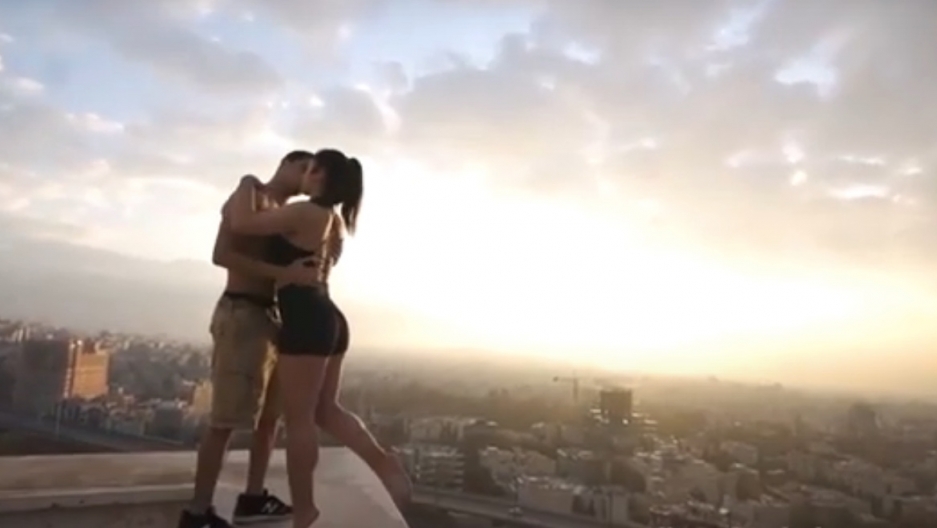 Parkour athlete Alireza Japalaghy kisses an unidentified woman in a video posted on Instagram that got him arrested by Iranian authorities for violating public decency codes.

Alireza Japalaghy’s legal troubles began after a 44-second video clip he posted on Instagram in May.

The 28-year-old parkour athlete’s videos are typically virtual tours of Iran’s urban landscapes and ancient sites, set to a house music soundtrack. He front flips over street markets; changes his clothes while free-hanging from rooftops, and stands on the spire of a commuter bridge like a character in a video game.

But one video landed him in hot water with Iranian authorities for violating public decency codes, forcing him to escape to Turkey. The possibility of extradition back to Iran has human rights activists concerned.

The video in question features Japalaghy and an unidentified woman kissing in several places: in front of the Tehran skyline, on a rooftop, and while hanging upside down off of a building. He’s shirtless. She’s wearing a sports bra, her ponytail pulled through the loop of a baseball hat.

In Iran, it is against public decency codes for women to appear in public without a hijab, and public displays of affection between unmarried people are not allowed.

Japalaghy and his partner were arrested in Iran after the video went public. Iranian authorities claimed the two had committed “vulgar acts.”

Japalaghy was later released on bail and left for Turkey. His partner's status, however, remains unclear.

In interviews before his arrest in Iran, Japalaghy exuded the easy confidence of a young athlete at the forefront of Iran’s growing parkour obsession. He spoke of his dreams of working in Hollywood and his struggles as a teenager following the mysterious disappearance of his father, an anti-narcotics officer, in 2010.

Activists suggest it was a recent public statement that Japalaghy made about his father’s disappearance that triggered the arrest.

“There are so many people that do worse things on Instagram,” his brother said in a video released afterward. “I don’t understand why a sports video clip should have so many stories behind it.”

Japalaghy had posted similar clips in the past, but haphazard enforcement of public decency codes can make it hard to predict what will land someone in jail.

Other arrested Instagram users include women who've posted footage of themselves not wearing a headscarf and dancing in a bedroom. One popular influencer couple successfully fled the country before being sentenced in absentia to prison time and public whipping over charges of “propaganda against the regime” and “spreading moral corruption.”

“One of the biggest problems with Iran’s public decency laws is that they’re intentionally vaguely defined, and open to interpretation by law enforcement, by the judiciary,” explained Tara Sepehri Far of Human Rights Watch.

“Increasingly, Iranians are joining social media, they’re acting on social media,” Far said. “But now, [the government is] interpreting social media as public space. So, there’s this losing battle between the authorities and the people.”

In Turkey, an uncertain future

Japalaghy escaped to Turkey, where he was detained by Turkish police.

In a June 30 video posted from a police van, he pulls a surgical mask down from his face to prove his identity, then speaks in Farsi.

“I passed the border,” he said. “I was arrested by the army and was handed to the gendarmerie, but I don’t know where they are taking me.”

Reports by independent Iranian journalist Aida Ghajar indicate that Japalaghy is being detained in a removal center near Van, a city close to Turkey’s border with Iran.

Now, human rights advocates are worried that he may be deported back to Iran.

“There seems to be something new happening. ... [Iranian authorities are] trying to bring people back and have them face their sentences back home.”

“There seems to be something new happening,” said Sanam Vakil, deputy director of the Middle East North Africa Program at Chatham House. “[Iranian authorities are] trying to bring people back and have them face their sentences back home.”

“Recently, in the past three or four years, Iranian refugees have had more problems with the authorities in Turkey than before,” said Moein Khanzaeli, an Iranian legal scholar now living in Sweden.

Turkey’s President Recep Tayyip Erdoğan styles himself as a protector of refugees; Turkey hosts more asylum-seekers than any other country in the world. In speeches, Erdoğan says deportations are only in the interest of national security.

Related: Syrians live under threat of deportation in Turkey

But analysts point to a recent case of two young Iranians who tried to seek asylum in Turkey after participating in popular protests in Iran sparked by rising gas prices last November.

“They wanted to request political asylum in Turkey. And they were in a taxi, evidently, and then the taxi driver turned them in to the Turkish authorities, turned into the police,” said Sina Toossi, an analyst for the National Iranian American Council.

The details were outlined in a report last month by the Human Rights Activists News Agency, an Iranian civil society group. The protesters were then deported back to Iran, where they’ve been handed death sentences by the country’s highest court.

“I mean it’s concerning,” Toossi said. “Given this track record ... those two youths sentenced to execution, other people, Instagram influencers have still been pursued by Iran internationally. Turkey does not seem to be the safest place for him to be.”

As for Japalaghy, his fate is unknown at the deportation camp in Van. According to COVID-19 protocols, Turkey can keep Japalaghy in quarantine and detention for at least 14 days.