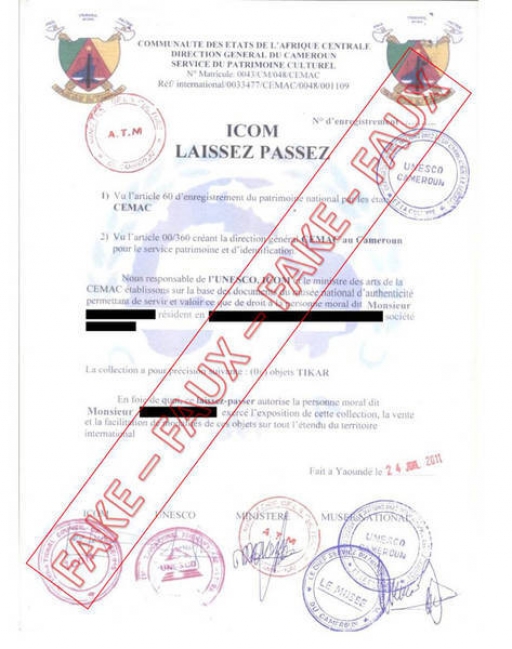 Scammers are using fake certificates with UNESCO's logo to convince art buyers to pay fees for the export of artworks.

The United Nations Educational, Scientific and Cultural Organization is warning the public of an online scam that offers and sells fake documents that will purportedly help buyers import and export African cultural heritage artwork.

The documents are passed off as official certifications of authenticity from UNESCO, using the agency’s logo, as part of a scheme to defraud art buyers.

UNESCO officials stress that the agency does not issue such certificates and that art collectors and tourists are falling victim to this scam. Scammers have stolen $1.1 million from prospective buyers this year alone.

The World's host Carol Hills spoke with Cedric Bourgeois, who works in the investigation office of UNESCO in Paris, to learn about how the scam works and what's being done to stop others from being defrauded.

Related: In the Netherlands, millers get UNESCO status

Carol Hills: How does the scam work?

Cedric Bourgeois: It usually starts on social networks with a casual conversation. Somebody spots your interest for the arts, and the conversation starts. You have a casual conversation up to the point where your contact knows a seller who has exactly what you're looking for. We've seen scammers impersonating soccer stars in Cameroon and approaching the son of a victim and then conversation, little by little moves on to other topics such as the interest for artworks. And suddenly comes a story of a seller in the US who has access to a village in Cameroon with artworks. The conversation goes on, up to the point, where a potential buyer trusts the seller enough or asks for more information and receives exactly what he needs: a fake certificate of UNESCO. I say fakes. A victim doesn't know it's fake.

And does the person show pictures online of these artworks?

Then they receive pictures taken in the village, on the pictures you can see the bush, you see in the background, you're in Africa.  It's exactly what it should look like.

And so then the prospective victim actually sends money and then never receives anything. Is that how it works?

The goal of the scammer is to receive the first payment. And once the victim sends a first payment, let's say, to get this certificate of UNESCO, then there's always the next payment to issue before you receive the goods. Then it's to clear customs. Then it's for the transporter. Then there needs to be an additional certificate from UNESCO. Of course, all this is fake. We never issue certificates to facilitate private trading. If you see the name of UNESCO associated with private trading of artworks, beware. This is not UNESCO. This is a scam.

No art, whether fake or authentic, has ever exchanged. This is simply passing off fake authentication by UNESCO as a way to gain the confidence and money and payments of prospective buyers who keep paying and thinking they're going to get art and they never do. They just keep paying money?

Who's behind the scam?

We've identified a few people because someone was arrested two weeks ago in Cameroon. Another perpetrator was arrested in France a few months ago. But this did not stop the schemes. We see more and more victims coming. And that's why we reach out to the general public in this global awareness campaign.

What's the scale of the scam? I mean, are there hundreds of cases? Thousands? How big of a deal is this?

This year alone, we are talking about 20 victims for a total of $1.1 million.

Are the buyers themselves, are the prospective buyers innocent in this scam or not? It's kind of a fuzzy area there.

It's hard to understand what leads the buyers to send money after a discussion about artworks on social networks. For sure. Sometimes the behavior of the victim might look reckless. But if you investigate the facts further, it is clear you have perpetrators on one side, victims on the other side.