Lotte Alberg, who owns two sex clubs in Amsterdam’s famous red-light district, is relieved to see her staff back at work. Club BonTon and Club LV both reopened this week after four months of lockdown due to the coronavirus pandemic.

News that clubs and brothels could reopen in the Netherlands from the start of July took everyone by surprise — including sex workers.

Related: Human touch is essential. How are people coping with 'skin hunger'?

Club owners were warned that the industry would remain in lockdown because of the pandemic until September, months after all other sectors had already reopened.

But the reality is that many sex workers felt forced to work privately and illegally just to survive. Now, as the industry starts to reopen across Europe, they worry about their earnings and whether they can stay safe.

The Dutch administration, like most European governments, paid a percentage of workers’ wages while they were furloughed. But sex workers rarely qualify. Many who work in the industry across Europe are undocumented migrants, making them ineligible for government support. Others avoid making a claim for assistance because they do not want their families to know what they do.

Alberg says some of her staff had no choice but to continue working privately in order to survive. But it wasn’t the coronavirus they feared most, she says. The women told Alberg that clients sometimes refused to pay the agreed price, knowing that workers had little recourse to demand payment because they were working illegally.

“They were more afraid of the clients because normally, when they work for us, we say, OK, you have to pay this. And this is allowed and this is not allowed.”

“They were more afraid of the clients because normally, when they work for us, we say, 'OK, you have to pay this. And this is allowed and this is not allowed',” she said.

In Germany, the sector remains closed under a government ruling. Most German businesses have now reopened, including gyms, bars and hairdressers.

Related: How the US coronavirus stimulus package compare to those of Europe

Viktoria, 29,  has been working in the sex industry for nine years and says she feels abandoned by the German government. She asked The World not to use her last name due to the precarity of her work.

“To be honest, it’s just to pay for my food and drinks and everything and not to go too far into debt. I know that it's still illegal, but it's just the bare minimum that I do to keep going on with my life.”

Originally from Ukraine, Viktoria moved to East Germany with her family at the age of nine. She started out working in strip clubs and now works in various sex studios. For the first few weeks of lockdown, Viktoria stopped working, too. But then with no income, she worried about falling too deeply into debt. Now she says she has three client appointments a week, just to get by.

Viktoria, a sex worker in Germany, continues to take on clients during the lockdown to make ends meet.

“To be honest, it’s just to pay for my food and drinks and everything and not to go too far into debt.  I know that it's still illegal, but it's just the bare minimum that I do to keep going on with my life,” she said.

The German Sex workers’ union, BesD, created an emergency fund for its members. But Viktoria says it is already almost out of money. She worries, too, that workers will be further stigmatized and blamed for any further outbreak of the virus.

Viktoria says because of the work she does, she’s more conscientious than most about working in a safe and clean environment.

In Britain, the industry remains shut down. Niki Adams, a spokeswoman for the English Collective of Prostitutes, says most sex workers are mothers, and many now face destitution.

“We have seen from the hundreds of women that we've been in touch with, that people have literally nothing to eat. They can't cover their rent. They have nothing.”

Adams says most women she knows have not started working again because they are terrified of contracting the virus and passing it on to their families. The collective organizes food parcels and emergency assistance for some sex workers in England, an initiative that has been mirrored across Europe.

The International Committee on the Rights of Sex Workers in Europe says support organizations have effectively taken on the role of national governments in assisting the workers. The committee’s coordinator, Luca Stevenson, who is also a male sex worker, cites Paris as an example where the local community came to the rescue. The city is host to a large group of transgender women from Latin America who are already living on the margins, he says.

“They work, they share flats, or hotel rooms, etc. They don't speak French, many of them, so they don’t understand the government measures, etc.” 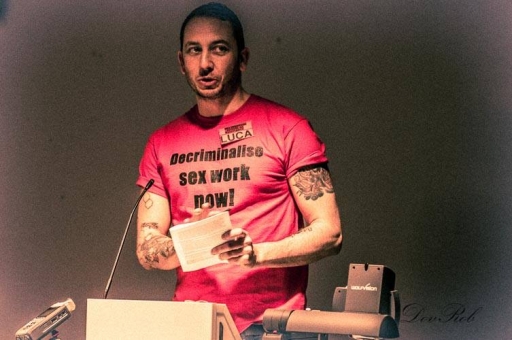 Luca Stevenson is a male sex worker and coordinator of ICRSE, the International Committee on the Rights of Sex Workers in Europe.

Stevenson says the trans rights group Acceptess-T held a community fundraiser that helped provide for the sex workers in Paris. Community efforts have been essential in assisting workers, but Adams says governments across the board have failed the industry. She says the pandemic and lack of state support shows how far the industry still has to go to gain legal recognition.

Prostitution is not illegal in Britain, but activities such as soliciting in a public place, pimping and curb crawling are unlawful. Adams says decriminalization of the industry would ease a lot of the suffering the collective is witnessing at the moment.

New Zealand, she says is a country that has gotten it right in terms of its prostitution laws. The New Zealand Prostitution Reform Act (PRA) fully decriminalized sex work in 2003. Sex workers there received emergency wage subsidies throughout lockdown.

As lockdowns are being lifted, some countries and sex workers unions are issuing guidelines about how to stay safe in the age of the coronavirus. Luca Stevenson says most of the new rules are simple, common sense.

“For example, no kissing, no exchange of body fluids. Trying to keep at a distance when it's possible. Using wipes etc. and changing beddings between clients.”

But the English Collective of Prostitutes is not convinced the guidelines will keep women safe.

Viktoria, a sex worker in Germany, continued to work privately during the coronavirus lockdown to make ends meet.

Adams says whether they take precautions often comes down to how much they need the money.  Leaving women in a situation where they are hungry, homeless and desperate for cash, means they are more vulnerable to exploitation and less able to insist on decent working conditions, including implementing any protections against COVID-19, she says.

Viktoria, the sex worker in Germany, says she is always conscious of her health and the health of her clients. But the economy’s health is a very real factor, too. And with most European countries facing their worst recession in decades, it remains to be seen how the sex industry fares.

Elard Tissot van Patot, who runs Amsterdam Red Light District Tour, says he’s relieved sex workers are allowed to return to work. The next stage, he says, is to encourage tourists to come back to the Dutch capital to get the industry off its knees.

At the moment, though, the famous partying district is quiet and many brothel windows stand empty. Sex club owner Alberg says she’s confident business will bounce back. “People always want sex,” she laughs.

But Adams, with the English Collective of Prostitutes, says it’s a fallacy to believe that male demand is what drives the industry.

“What determines how much prostitution there is, is determined by women's need for money — and not men's desire for sex.”

“What determines how much prostitution there is, is determined by women's need for money — and not men's desire for sex.”

Adams says as long as poverty increases, then women, particularly mothers will be forced into more desperate situations which inevitably leads to a rise in prostitution.

Like Adams, Viktoria wants to see the laws that criminalize the industry overturned. But she says it’s also time to have a more honest conversation about individuals’ sexual and emotional needs and frankly recognize the role that sex workers play to fulfill them.