South Koreans are no strangers to large protests. Student activists helped bring down the country’s dictatorship in 1987, and 30 years later, demonstrations led to the impeachment of a president who was widely seen as corrupt.

But the way these two movements played out in the streets could not have been more different.

Protests in South Korea were once characterized by intense, often violent confrontations between demonstrators and the country’s security apparatus. But three years ago, following months of peaceful rallies that culminated in the removal of a disgraced president, those fierce standoffs seem to be a thing of the past as national police reform becomes the norm.

Throughout late 2016 and early 2017, millions of South Koreans participated in demonstrations in downtown Seoul, calling for President Park Geun-hye's removal. Park, accused of using her position to win favors from business leaders, was found guilty of various corruption charges and is now serving a 32-year prison term.

Despite the protests’ size and the presence of thousands of riot police, the so-called “candlelight revolution” saw no significant tension between the two sides. Some protesters say one reason for the absence of violence was because anger was directed at the disgraced president and not toward these young men who were just “doing their jobs.”

“I feel there was an unspoken agreement between us. ... We know that the riot police are carrying out their service and they trusted us to not use violence. ... I actually felt sorry for them."

“I feel there was an unspoken agreement between us,” said 34-year old Yoon Na-ri, who joined the protests every weekend. “We know that the riot police are carrying out their service and they trusted us to not use violence.”

“I actually felt sorry for them,” she added.

Choi Gyu-tae was one of the thousands of riot police who stood guard throughout the rallies.

“Koreans have the ability to unite really well and that’s why the demonstrations against President Park remained peaceful,” Choi said.

Choi said he’ll never forget the first time he worked crowd control during a protest in 2015 at the start of his 1 1/2-year stint as a riot police officer.

He says his colleagues warned him that he needed to be “emotionally prepared” for the encounter with labor and farming activists at that rally in Seoul.

“The atmosphere was tense,” Choi, now 24, said. “The demonstration turned violent, and they started throwing bricks at us and spraying us with fire extinguishers."

Choi said some riot police were injured during the clash, and police fired water cannons to push back the protesters, causing the eventual death of one demonstrator, which some advocacy groups say was due to “excessive force.”

This was not the norm, Choi said. Riot police are instructed not to use force against unruly demonstrators and are instead taught ways to deescalate tensions before violence erupts.

Riot police do not carry guns, batons or pepper spray. They primarily use large, plastic shields, instead.

Choi said officials from Korea National Police Agency (KNPA), which oversees riot police units, showed his team videos of old protests that got out of control to learn what not to do in similar situations. And they learned how to use their shield to form barriers between groups of violent protesters.

The overall cohesion between demonstrators and the police is a recent phenomenon, according to some observers.

Michael Breen, who started covering Korea for British and American newspapers in the 1980s, says during protests back then, it was Molotov cocktails and not candles that lit up the streets.

He says the violence sometimes seemed “theatrical” and was commonplace.

“The students [during the pro-democracy movement] were breaking up cobblestones and pavement and throwing bits of concrete at the police then the police were firing teargas back at the students."

“The students were breaking up cobblestones and pavement and throwing bits of concrete at the police then the police were firing teargas back at the students,” said Breen, author of “The New Koreans: The Story of a Nation.”

He says while there was sympathy for the rank-and-file riot cops, student demonstrators at that time regarded the KNPA as “thugs” from the former dictatorship.

The death of a student activist at the hands of police in 1987 is widely credited with sparking the democracy movement that forced the country’s military rulers to hand over power to an elected government a year later.

“The police had an awful reputation,” Breen said.

But Korea’s police force gradually began to change their tactics in order to stop provoking demonstrators, Breen said, such as halting the deployment of undercover agents onto university campuses to arrest student leaders. 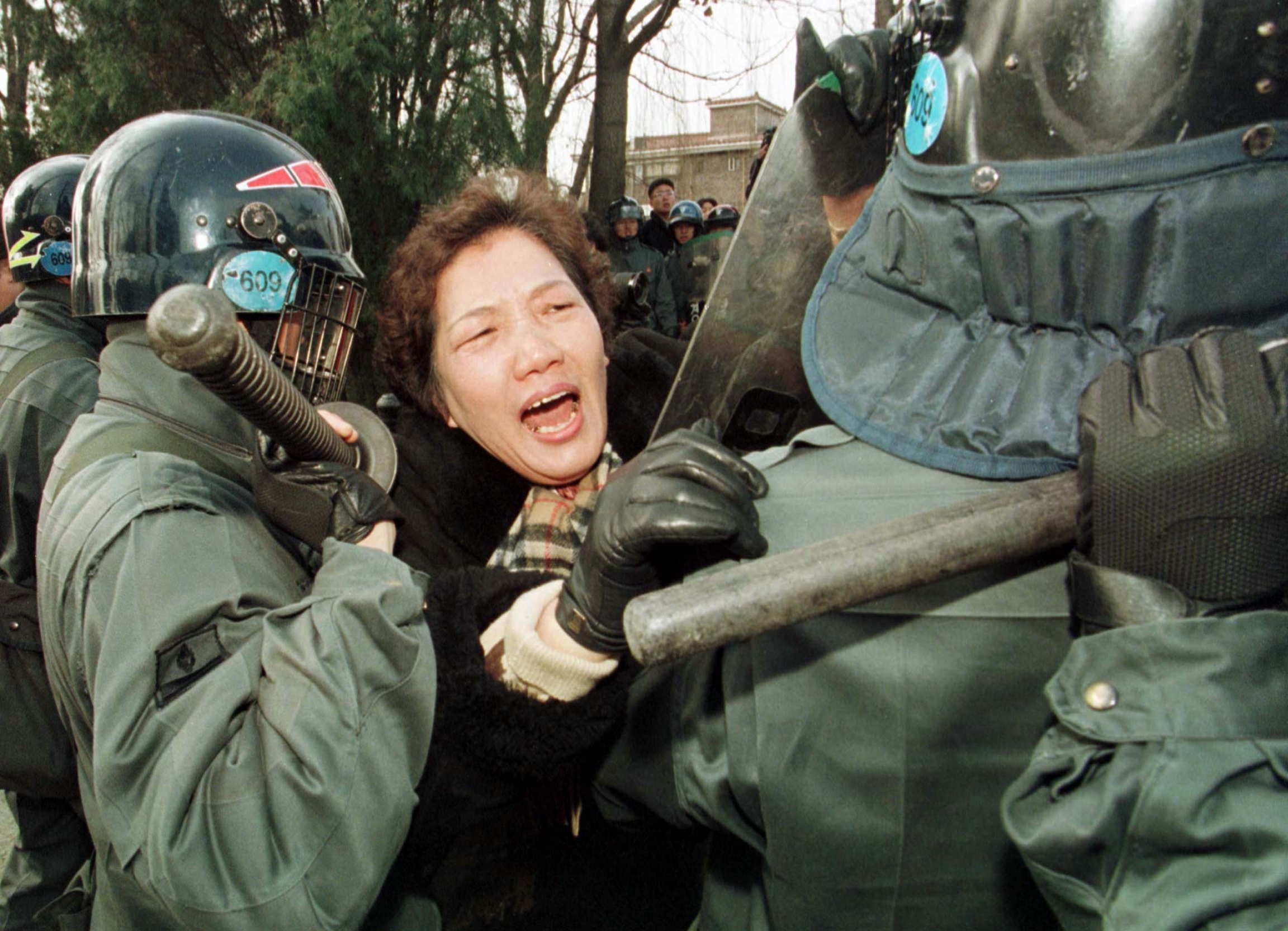 South Korean woman Bae Un-shim, whose son was killed by police in 1987 under then-president Chun Doo-hwan, screams at riot police in an attempt to break through their cordon to reach the limousine carrying former president Chun, who was given a special government pardon after serving a little over a year of a life sentence for mutiny, treason and corruption.

South Korea’s police force had also faced international criticism for what some health experts called an “unprecedented” use of tear gas during pro-democracy demonstrations.

While the chemical is not officially banned, “it has not been deployed for about 20 years,” according to Kim Jin-hyung, superintendent of KNPA’s security and safety section.

Breen says thanks in part to these steps, the “whole nature of protests has changed.”

“That thuggish image is completely gone and the protesters have realized violence wrecks your cause,” he said.

The KNPA continues to atone for some of its past behavior.

“We acknowledge that we hurt people during the democracy movement. ... We are paying respect to the families of our victims from that time by promoting human rights.”

In June, the agency adopted what it calls a human rights code of conduct that ensures the protection of civilians and also allows officers to refuse orders that they feel violate the rights of citizens, according to Park Weon-sik, a KNPA official.

“We acknowledge that we hurt people during the democracy movement,” he said. “We are paying respect to the families of our victims from that time by promoting human rights.”

He adds that because of those struggles in the past, South Koreans can have peaceful protests, like the candlelight demonstrations, now.