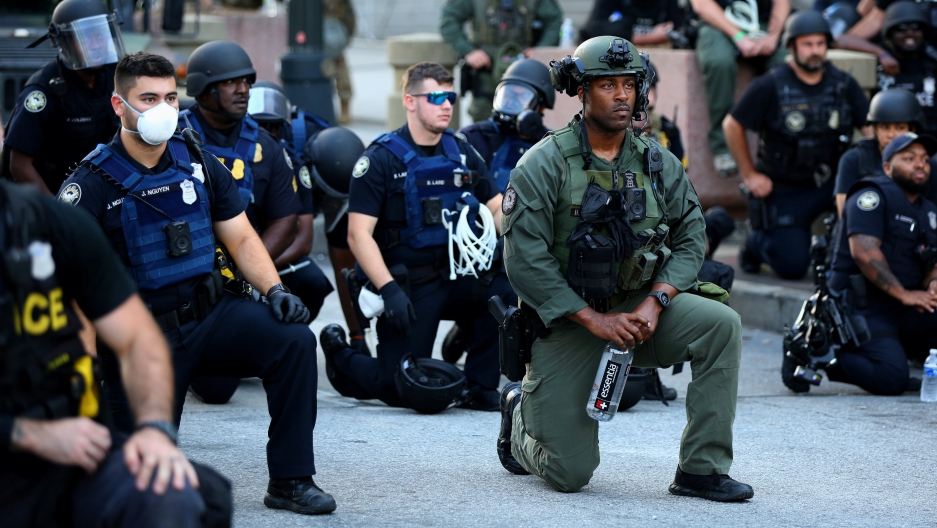 Officers kneel with protesters during a protest against the death in Minneapolis of George Floyd, in downtown Atlanta, Georgia, June 1, 2020.

Protests unfolding around the world in response to the killing of George Floyd, an unarmed black man, by a white Minneapolis police officer, are bringing up a lot of issues including systemic racism and extreme inequalities in the United States.

At the heart of the matter, though, are calls for reforms on how policing is done.

Khatia Dekanoidze knows about that. A former chief of the National Police of Ukraine, Dekanoidze has worked on police reform and still does in Ukraine, Georgia and Moldova. She joined The World's host Marco Werman to discuss what US police officers can do now to reform.

Related: The power of protest: Part I

Dekanoidze insists that human rights should be a top value, above all.

Marco Werman: You've been watching the violent interactions between police and protesters in the US. What are you thinking, Khatia, when you see this?

Khatia Dekanoidze: Well, you know, I'm not very happy. I think that the United States was a model, actually, for democracy and for civil society. But what is going on, it's like, probably the No. 1 reason for this is the political influence on law enforcement. And actually, when there is political influence in the law enforcement sector, it always can turn back. So, that's a problem.

You led some major anti-corruption efforts in your police force in Ukraine. It boils down to changing the culture within, a culture that you were endowed by the Soviet Union. So, what does it take to reform what I assume was an entrenched culture in the police force?

Yeah, actually, both in Georgia and Ukraine, we had huge problems. But I have to say, in Georgia, we did change the approach. We changed the whole human resources and we told them during the training. So, the No. 1 rule for all police officers is to defend human beings and human rights. If a police officer is corrupted, if a police officer really thinks "nobody will punish me," that's a problem. So, ideological change was very much important, especially with the police academy. But also, in Ukraine, as well as in Georgia, we had also the problem of political influence in law enforcement. When a law enforcement officer sees that there are some political figures [who] can give some kind of different orders that are against human rights, I mean, sometimes they think that "OK, I can do this, and nobody can punish me."

Related: Ukraine's police are so corrupt, officers are getting fired by the hundred

When it comes to excess violence on citizens — like police brutality — how is that dealt with in training? How is that taught?

Actually, during demonstrations and crowd management, the No. 1 rule is not to really use force but to have some kind of dialogue with the people. When there are so many people in the street, I mean, police must have dialogue, right? And working with the community, interacting with the community, they must understand what kind of problems the community does have. It's very important.

Khatia, how do you create a culture in which police officers themselves hold each other accountable?

For instance, in Georgia, we created a special monitoring service.

So, a kind of internal affairs bureau? Is that what you're saying?

Absolutely, yes. A monitoring service can observe the everyday communication of patrols, police officers and troopers. I mean, the tragic history of what was happening in Minneapolis — It shows that the police officer, he really was not conducting himself as a law enforcement officer, right? Because the No. 1 rule once you're interacting with a citizen: You must think about human rights. Because you are the person in uniform and you represent the government and authorities. You must understand that you have a huge responsibility.

You've listed a lot of different strategies for police reform. Can you name one or two things that American police departments might do right now?

Absolutely. So, No. 1: a good recruiting system. Recruit the best. This is very important. The second is absolutely brilliant training. They must understand that nobody can be above the law. And the third, and very much important, no law enforcement officer can avoid political figures, but politics is different and the law enforcement is absolutely different. And you have to think about human rights. It is the top value — the top value for police officers.