Pachinko defies easy description. Imagine if a pinball machine and a slot machine had a baby — an incredibly loud baby that bleeps and jingles and lures you into a daze.

As with slot machines, playing pachinko is gambling, though the Japanese government insists it is a game of skill, lest the popular game run afoul of anti-gambling laws.

Pachinko is one of Japan’s most iconic pastimes. To play, you purchase tiny metallic balls, feed them into a machine and twist a knob. The balls then rain down over a maze of pegs and slots.

If they fall into the right slots, jackpot. The machine bleeps triumphantly and out gushes a torrent of balls. This gratifying rush of metallic plinks lets a player know they’ve just scored easy money.

If that sounds addictive, consider that hardcore pachinko players can’t even stop playing during the COVID-19 pandemic.

Much of Japan is under a state of emergency, and officials have asked many shops to close.

“Usually, Japanese people are very obedient. If the government asks, they follow.”

“Usually, Japanese people are very obedient. If the government asks, they follow,” said Ichiro Tanioka, president of the Osaka University of Commerce.

“But pachinko parlors,” he said, “have decided to continue operating.”

Related: In Japan, a 1,000-year-old cheese recipe makes its comeback

Not all of these parlors have remained open. But the joints going rogue are despised by key politicians and much of the Japanese public. The country has shut down schools and offices and parks — and yet, outside some pachinko joints, men stubbornly line up to get their fix.

Yes, it’s mostly men. Pachinko is a “haven for middle-aged men to go and smoke and kind of lose themselves in a trance,” said Michael Penn, an American who has lived in Japan for more than 20 years. He is the executive editor of Asia Gaming Brief, a service that analyzes trends in the pachinko industry.

Penn said that pachinko players are already “not necessarily in the graces of polite society.”

Tanioka agrees, saying that, if someone whiled away an afternoon in a pachinko parlor, “that is not something you would be proud of.”

At a glance, these parlors look and sound like a 1980s video game arcade, minus the kids and much of the joy. It’s common to see hardcore players staring dead eyed at pachinko machines for hours on end. (Wander the slot machine aisles in Las Vegas, and you’ll see the exact same expression.) 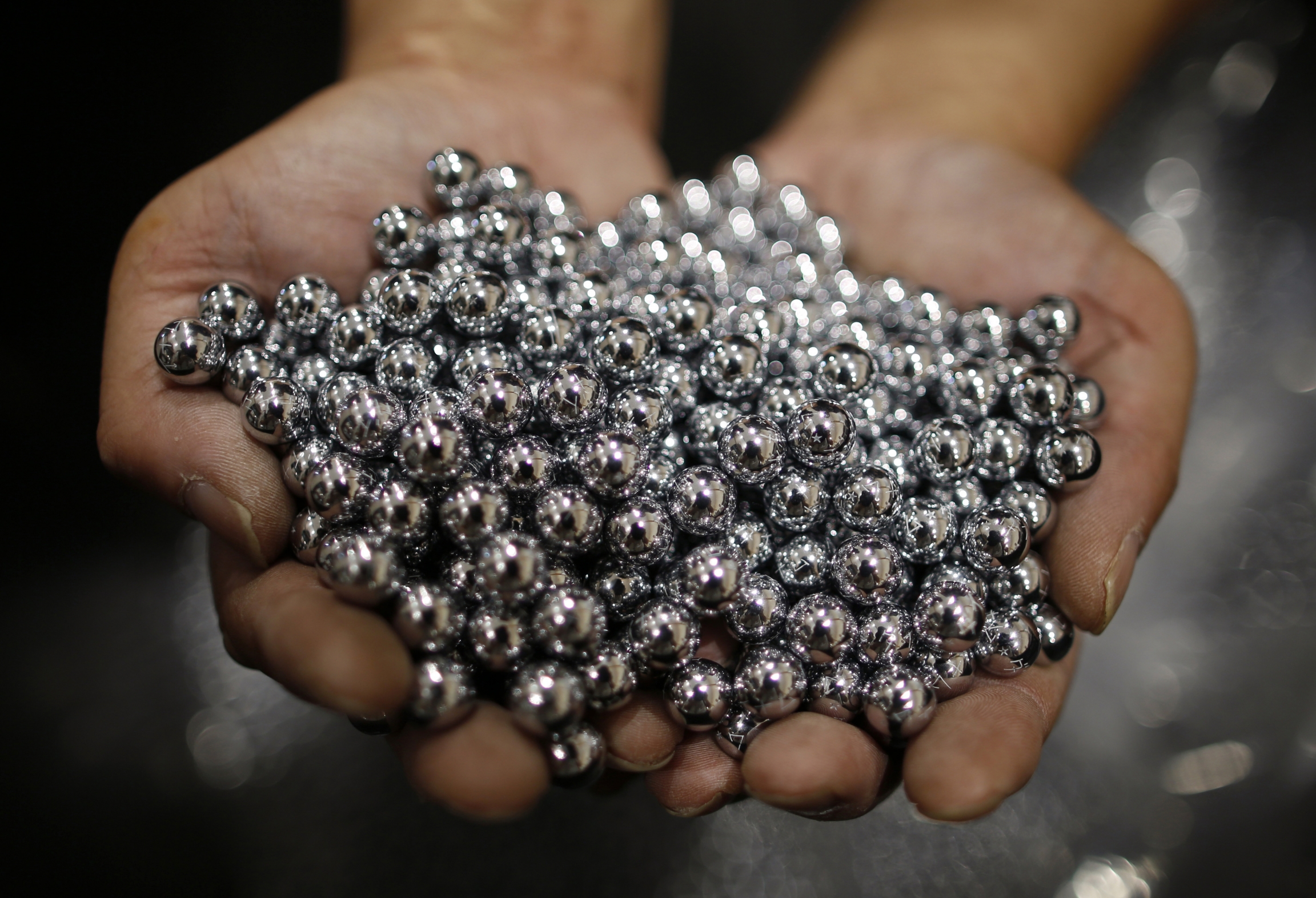 A worker holds silver pachinko balls at a pachinko parlour in Fukaya, north of Tokyo, July 15, 2014. Pachinko, a modified version of pinball, is a fading national obsession as the population shrinks and younger people prefer games on their mobile phones.

A pachinko joint isn’t dodgy per se, but it does have an aggressively juvenile vibe — especially for a place that mostly attracts older men.

On built-in video screens, many pachinko machines flash images of squealing anime girls. A crowded parlor will seat men elbow to elbow, but it’s hard to hold a conversation over the wild beeping and tinkling metal balls. It’s also difficult to breathe once the chain-smoking starts.

The parlors exist in what Tanioka calls a “gray zone” under the law, at least when it comes to cashing in. If a player racks up a fortune in pachinko balls, he can exchange them for prizes inside the parlor. Think snacks, electronics or toys.

But to collect actual money, he must leave the premises and seek out a nearby storefront that turns those metal balls into cash. This is a legal sleight of hand, allowing police to insist that pachinko parlors do not facilitate gambling, Tanioka says, but instead, provide nothing more than a “fun game.”

But if pachinko parlors exist on the fringe of polite society, why won’t the police just order them to close — at least until the pandemic is over?

They can’t. Japan’s constitution was written after World War II during American occupation — and its foreign commanders included rules to prevent the return of authoritarianism.

Even today, during a horrific outbreak, it’s legally difficult for Japanese officials to demand that certain shops close, and certain people stay home.

“The government asks — actually, they beg — for stores to close down,” Tanioka said. “But some pachinko parlors do not follow the request.”

Moreover, despite the mild taboo, pachinko is quite popular. Some estimates suggest that the amount of money flowing into these parlors is equivalent to 4% of Japan’s gross domestic product.

“The amount of money that circulates through the machines is certainly a jaw-dropping figure.”

“The amount of money that circulates through the machines is certainly a jaw-dropping figure,” Penn said.

But the parlors don’t get to keep all of that money. It’s gambling, after all, and some gets returned to players. Tanioka estimates that pachinko businesses only retain a modest percentage of the total amount of cash pouring into their shops.

Pachinko is also an industry in decline. Twenty-five years ago, Japan had twice as many pachinko parlors. But when the younger generation wants to stare at screens, they’ll usually opt to look at their phones — rather than pay money to gaze at a pachinko machine.

Some pachinko bosses, watching their revenues dip year after year, are therefore willing to stay open, even if it aggravates their neighbors. Those risking society’s anger actually get rewarded — because they pull in customers from the parlors that have locked their doors. 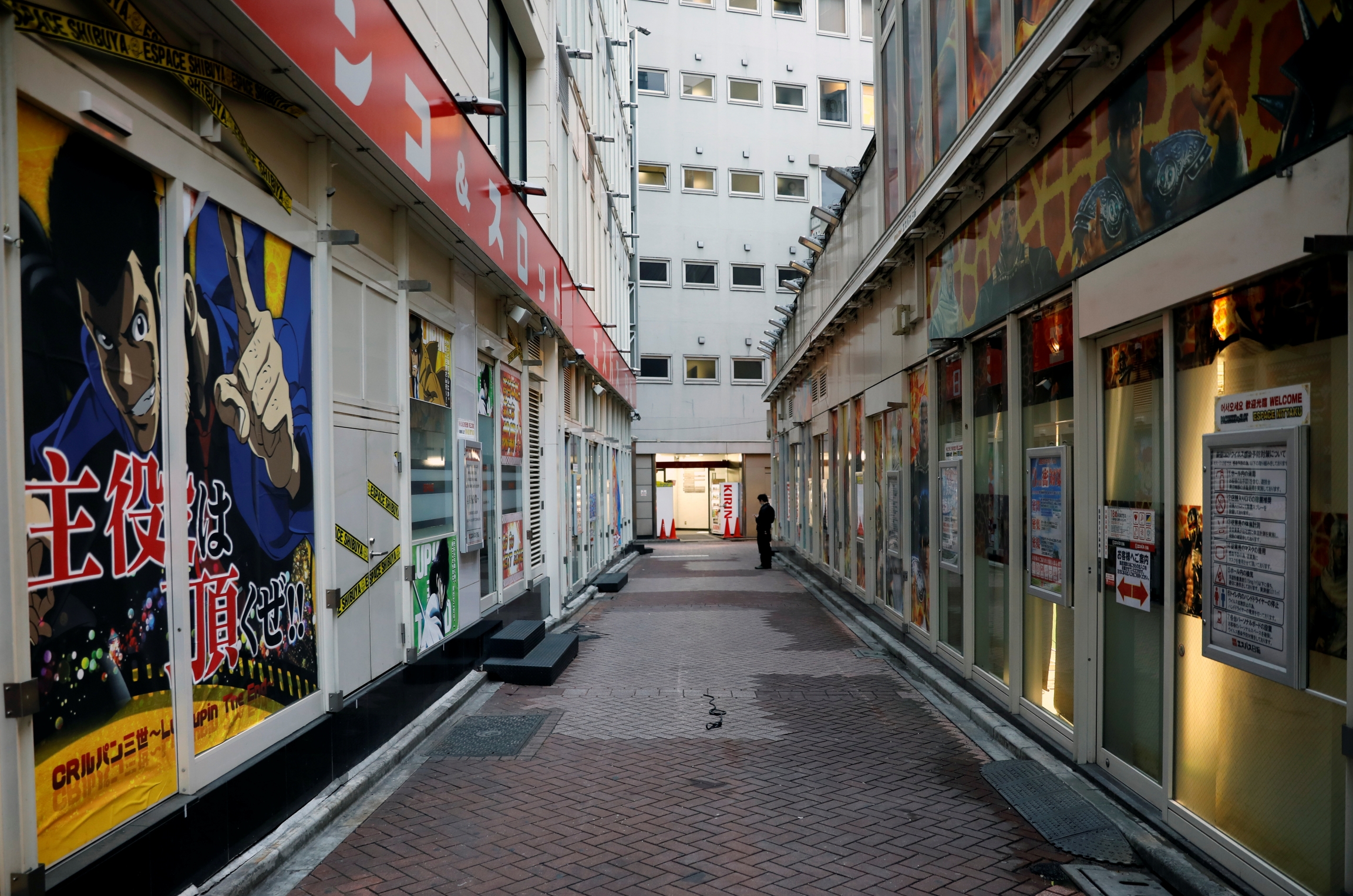 A man stands in front of a closed Pachinko parlour, following the coronavirus disease (COVID-19) outbreak, in Tokyo, April 28, 2020.

“The defiant companies,” Penn said, “may in a morally dubious way benefit economically from their social irresponsibility.”

Parts of Japan are now starting to relax their shutdowns, which means many pachinko parlors should soon be able to reopen without drawing much wrath. That’s assuming that the more casual players will feel comfortable sitting in a stuffy room with strangers.

But Penn believes some of the parlors that did the right thing and locked their doors will stay closed. Because of the COVID-19 crisis, he says, some pachinko joints “that were already on the edge of bankruptcy will get pushed over the ledge.”