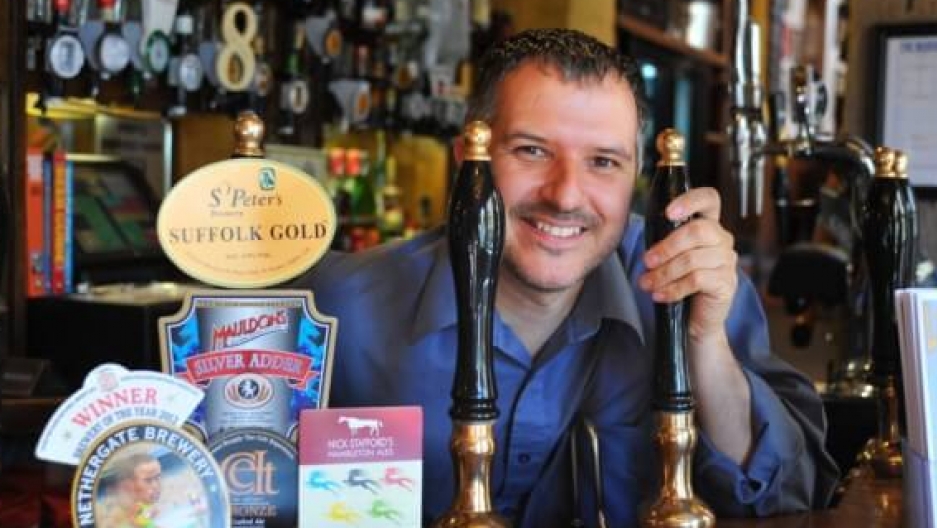 Philip Cutter is the owner of The Murderers pub in Norwich, England.

It’s like a scene straight out of the Prohibition era: barrels of beer poured down the drain.

But this isn’t 1920s America; this is Britain today. The Campaign for Real Ale (CAMRA) predicts that 50 million pints worth of beer will be dumped in the United Kingdom within weeks if the country’s lockdown continues. Since March 20, all restaurants and pubs have been closed.

Molly Cutter filmed her father as he emptied 50 gallons of ale down the drain. Seeing the beer trickling away brought him — a pub owner for 16 years — close to tears.

Related: When it comes to reopening economies, 'no fast track' to normal

Philip Cutter runs The Murderers pub in Norwich, England. (The pub is officially known as The Gardeners Arms, but its nickname is The Murderers.) The casks had been open for weeks and, a month into lockdown, Cutter knows that the ale is no longer drinkable.

If he could, he would have sold the beer or even given it away for free, but he said that could pose problems with his insurance company. Cutter said part of his grief was driven by the knowledge that local brewers had put so much love and craft into making the ale.

“To actually have it thrown back down the drain is heartbreaking,” he said.

Cutter was 15 when he started working in the pub and says he has never experienced anything like this in over three decades behind the bar. Princess Diana’s death in 1997 was the only other time he remembers the pub being briefly silent.

“To have day in, day out, the pub closed and no one in is just absolutely surreal. The only other time I remember was for the funeral of Princess Diana. We closed that morning out of respect, but we still opened up again that evening."

“To have day in, day out, the pub closed and no one in is just absolutely surreal. The only other time I remember was for the funeral of Princess Diana. We closed that morning out of respect, but we still opened up again that evening,” he said. 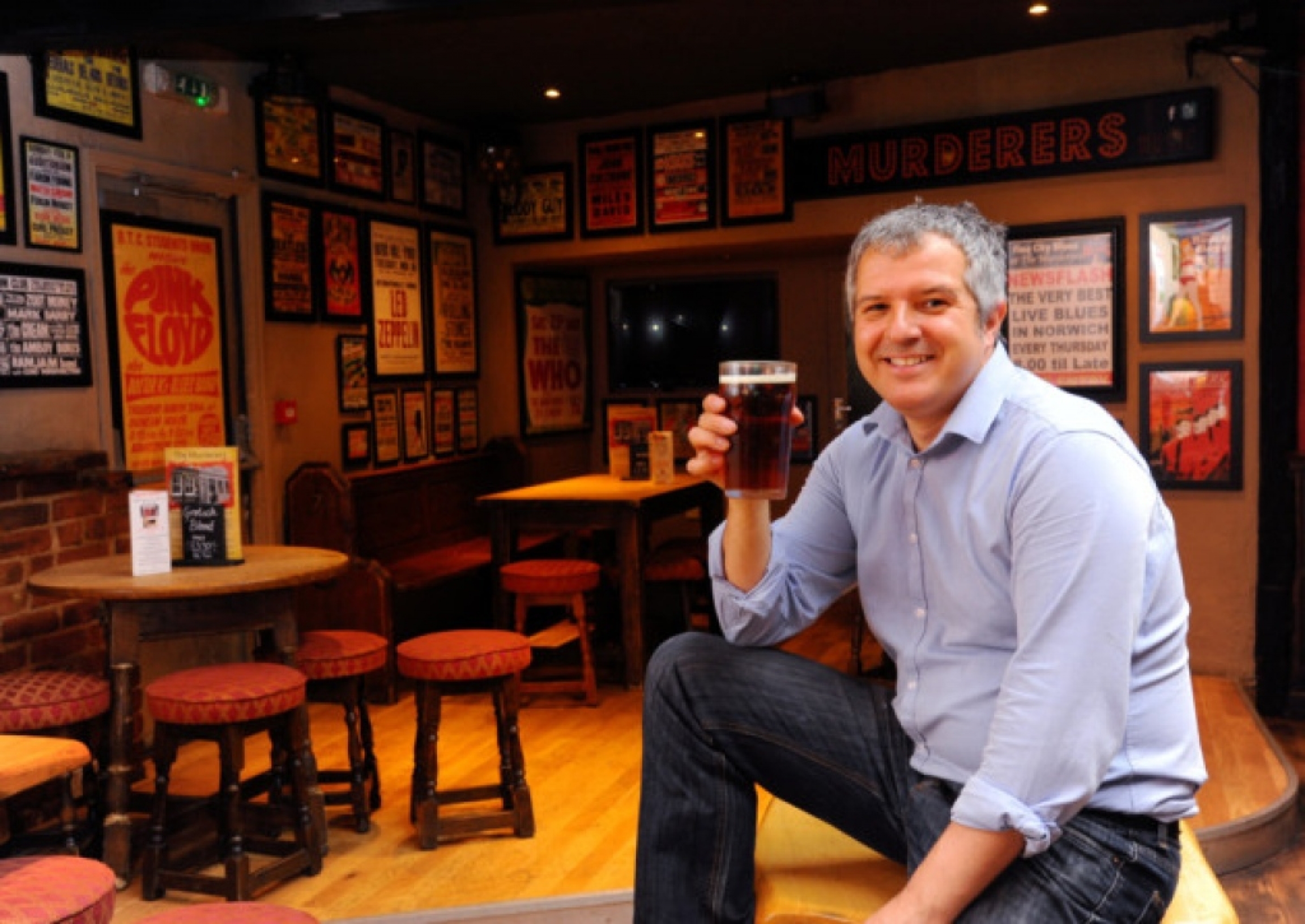 Phillip Cutter drinks a beer at his pub.

The problem for bar owners like Cutter is not just the open casks and deteriorating beer; it’s the thousands of closed barrels they have in their cellars. Consumer group CAMRA believes by June, most of those barrels will have to be thrown out. The group’s national chairman, Nik Antona, says some bar owners have come up with novel ways around it.

"I’ve heard of very clever licensees approaching their local fish and chips shop and saying, 'Do you want some beer that can be used for beer batter or fish and chips?'” he laughed.

But there’s only so much beer batter a British chippie can use. 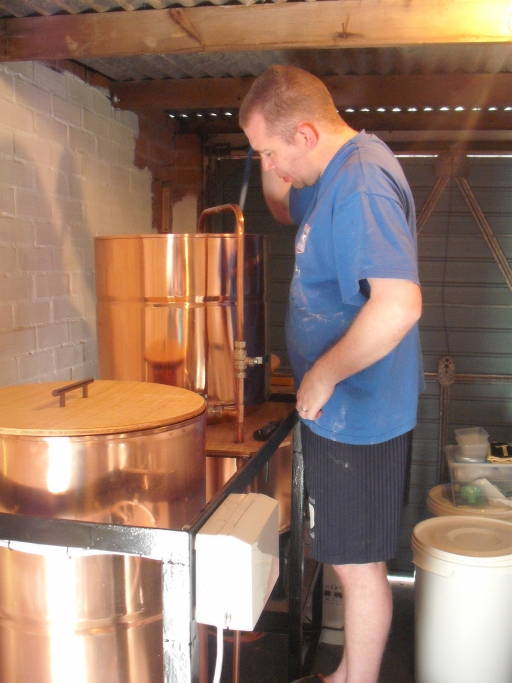 Richard Muir of the Muirhouse Brewery stands over his brewer's kit in his garage.

Brewer Richard Muir came up with a different strategy. He runs the Muirhouse Brewery in the English town of Ilkeston in Derbyshire. Ten years ago, Muir took a gamble and left a well-paid job to follow his dream of starting a microbrewery. It was a steep learning curve, but over the decade, Muir and his wife, Mandy, have built up a viable business. Last year, the pair took over a small pub called the Weighbridge Inn in nearby Burton near Trent. Then, the coronavirus happened.

With the pubs shut, demand for his homemade beer plummeted, and Muir worried it might mean the end of his business.

Muir decided to put a message on Facebook asking customers if they would be interested in home deliveries of his ale. He was inundated with requests. The response lifted his spirits, but just as important for him was that he could reconnect with customers once again. Even from a few miles away.

"It's nice to be providing a service that hopefully puts a smile on people's faces. When they see someone through a door, and then they get to have a drink. It makes it seem a bit more like normality,” Muir said.

Still, Muir’s business has fallen by over 75%. His pub stands empty, which causes him more heartache.

“It's like the heartbeat has gone out of the business. It's like it's dead. I know that sounds a bit strange, but that's how it feels to me to go in there. It’s like — it's finished,” he said.

Cutter struggles too, with his pub shuttered. He misses chatting to his customers, and his children are tired of listening to his seven jokes, he laughed. Cutter has paid his staff, but he is living on a credit card and waiting on promised government financial support to arrive: The government has agreed to pay 80% of the salary for staff who are kept on by their employer — covering wages of up to 2,500 pounds or $3,118 per month.

The lockdown has hit pub landlords hard. A few weeks ago, one local bar owner took his own life, Cutter said as his voice cracked.

“I think when you get to a stage where people are taking their own lives because they can't see a way forward. I mean, there's clearly other issues there — but to feel that there's no way forward, you know ... is hard.”

Cutter set up a WhatsApp group with his staff so they can all stay in touch. He said he hopes they know they can share their worries with him. CAMRA’s Antona is missing the company of his friends and colleagues, too.

“I cast myself as a social drinker. I very much like sitting with me mates and my CAMRA colleagues and having a good chinwag while enjoying a beer in a pub."

“I cast myself as a social drinker. I very much like sitting with me mates and my CAMRA colleagues and having a good chin-wag while enjoying a beer in a pub," Antona said.

Like many industries, there are fears that an extended lockdown could sound the death knell for some British pubs. Social distancing would be hard to manage in small bars, in particular, and some bar owners worry that people will grow accustomed to drinking at home.

Muir though, believes that not even a pandemic can end the British love affair with the pub.

“I don't think you'll ever eliminate pubs in this country. It's too much ingrained in society. Drinking at home is all well and good. But it's not the same as being in the pub with your friends.”