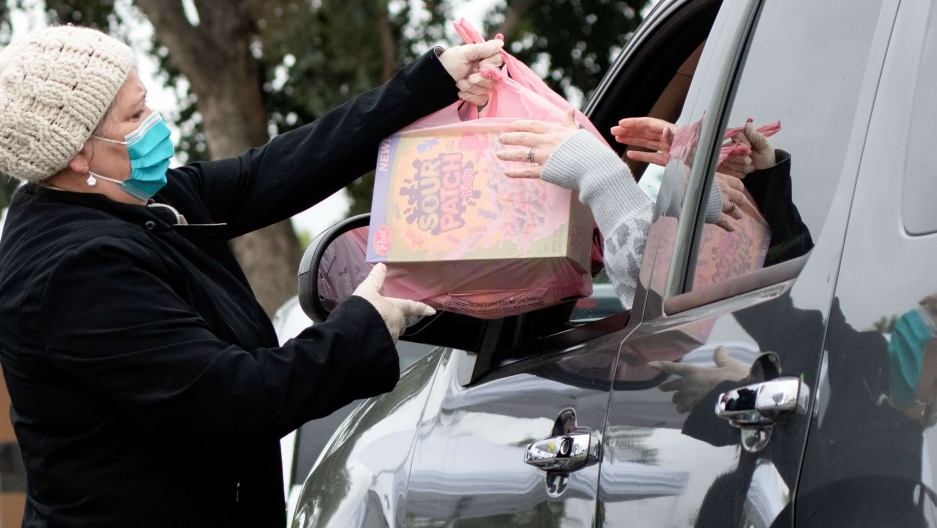 A volunteer of Southridge Church hands out bags of essential items, including toilet paper and masks, after Easter services were held at West Wind Capitol Drive-In Theater, while the spread of the coronavirus disease (COVID-19) continues, in San Jose, California, April 12, 2020.

When Indigenous community organizer Valentina Harper co-founded the CareMongering mutual aid Facebook group in Toronto in mid-March to help people cope with the coronavirus pandemic, she was expecting a couple of dozen members.

Related: Faith in the time of a global coronavirus crisis

The idea, conceived by co-founder Mita Hans, a Sikh community organizer in Toronto, was to connect people who needed things like groceries, money or medicine, with people who could donate them.

“It was glaringly obvious that people were desperate to connect to each other and to help each other. ... People are desperate for help as well.”

“It was glaringly obvious that people were desperate to connect to each other and to help each other,” said Harper. “People are desperate for help as well.”

Four weeks after starting, the CareMongering group has more than 600,000 members in more than 30 places.

CareMongering is one of many mutual aid organizations around the world that have either been created or expanded to help people struggling during the pandemic — either because of age, health status or financial vulnerability, among other things.

Certain people are systemically vulnerable and under-cared for in the coronavirus pandemic, said Harper, such as people of color and people with fewer resources. That dynamic parallels another issue close to Harper’s heart: climate change.

“It’s going to be our poorest, our most marginalized who will always pay the price,” said Harper.

Already in the US, early data shows that 33% of those hospitalized for COVID-19 are black, even though black people only make up 13% of the population. Stark racial disparities are being seen in the United Kingdom as well.

While the threats — infectious disease and climate change — are different, mutual aid is a solution that speaks to both, said Harper.

"It’s really about taking care of each other when the government fails to do so.”

Thousands of people have been helped by CareMongering groups around the world so far. From grocery drop-offs to free legal advice, to online yoga and therapy sessions.

The idea of mutual aid is to help connect people who have resources with people who need them, by building community connections and support, said Harper. This is done in person, or, — due to social distancing — through online platforms, like Facebook or email listservs.

Many mutual aid groups around the world are working to respond to both the longer-term effects of climate change and the current urgency of the coronavirus.

One mutual aid group in Puerto Rico, Centro para el Desarrollo Político, Educativo y Cultural (CDPEC), was created in 2017 after the devastation of Hurricane Maria, but is now finding itself perfectly positioned to help in response to the coronavirus.

“Some of the centers are really active right now dealing with the same issues that we’ve always dealt with, like getting food and equipment for people. ... There's a lot of old people in Puerto Rico who do not have any anyone to support them or help them.”

“Some of the centers are really active right now dealing with the same issues that we’ve always dealt with, like getting food and equipment for people,” said CDPEC co-founder Giovanni Roberto. “There's a lot of old people in Puerto Rico who do not have any anyone to support them or help them.”

Roberto said that after Maria, their main focus was food, medical services and housing. Now, with the coronavirus, their focus is on food delivery.

“Supermarkets are really full of people that don’t have the money to buy food for a month,” said Roberto. “So, they have to go continuously to the store, increasing the potential for contagion. It’s a tough situation.”

Puerto Rico currently has about 900 reported cases and 44 deaths, and those numbers are expected to rise in the coming weeks for the island of over 3 million people.

Roberto’s goal is to have mutual aid groups in every community on the island. In the last two years, CDPEC developed 10 centers, most of which are now in operation, delivering food and essential supplies. Roberto said all the centers are also preparing for hurricane season — which is only months away.

“Mutual aid is community-based. It’s local. It’s a model that can adapt and build the skills of resilience,” said Roberto. “The best way of helping people is with the perspective of dignity and solidarity — not charity. Mutual aid builds power from the bottom-up.”

As unemployment numbers skyrockets and hundreds of thousands grow ill in the US, hundreds of mutual aid groups have formed to help communities cope with unprecedented hardship.

One large group in the United States, Mutual Aid Disaster Relief, is a national collective of activists that originally formed in 2005 after Hurricane Katrina devastated New Orleans, followed by an inadequate relief response from the federal government, leaving thousands displaced.

The group recently published a post, comparing the coronavirus pandemic to other disasters, and promoting mutual aid as a solution. The post said: “When every community is a different version of ground zero, sourcing from within, in as much as possible, becomes a critical component.”

Many mutual aid groups, including those organized by Roberto and Harper, are explicitly political. They focus on helping people materially, while simultaneously pushing for systemic social change, often weaving together social, racial, economic and climate justice issues.

“This is a time of politicization. ... People are asking questions to the government, and they’re not finding answers."

“This is a time of politicization,” said Roberto in Puerto Rico. “People are asking questions to the government, and they’re not finding answers. [Part of the mission is for] people to understand the ties between capitalism, colonialism, climate change and our future, and the things that we need to do to change our future.”

Harper, of CareMongering in Toronto, said she hopes the newly formed mutual aid group stays engaged after the pandemic, giving people a long-term platform to fight for environmental justice and other issues that impact their communities.

“We want to leverage this people power that we’ve gotten world-wide,” said Harper. “CareMongering is there because we've had three levels of government fail the people, and we've had no choice but to take care of each other.”

“CareMonger means I care for everyone, especially those who need it most,” she said.

Harper said building community through her mutual aid project has inspired her.

“Personally, there’s a glimmer of hope,” she said. “I have more hope for humanity now, deep into this crisis, than I did going into it.”