On March 15, Pope Francis did something unusual: He walked along the streets in the center of Rome. Italy was entering its second week of lockdown in response to the novel coronavirus, and he went on a pilgrimage from one church to another to pray for the pandemic's end. The streets were deserted.

Francis’ walk included a stop at the St. Marcello church to pray before a crucifix that was used in a procession when the plague hit Rome in 1522.

The pope, the Vatican — a tiny city-state surrounded by Rome — and the church in predominantly Catholic Italy have all been forced to modify centuries of tradition because of the outbreak. The global death toll from the pandemic hit 100,000 on Friday, including nearly 19,000 in Italy, according to a Reuters tally.

“They think of a thousand ways to be close to the people, so that people don’t feel abandoned,”

A few hours before his stroll through Rome, during the livestreaming of his Angelus prayer from the Vatican library, the pope thanked the priests for their creativity in continuing their ministries in new ways: “They think of a thousand ways to be close to the people, so that people don’t feel abandoned,” he said.

In Italy, as elsewhere, Mass has been canceled to avoid people gathering. The Vatican said earlier that Holy Week and Easter services would be held without public participation, a step believed to be unprecedented in modern times. Some churches have turned to local radio, television or the internet to stay connected to their congregations, while others are expressing their creativity in other ways.

Rev. Andrea Vena, the priest of Bibiano, a small town on the coast near Venice, has found a way to stay in touch with his congregation from a social distance. One morning in early March, he loaded a statue of the madonna on a three-wheeled car and set off along the streets of his town.

Standing in the back, a microphone in his hands, he recited prayers and sprinkled holy water as a sign of blessing. To the few passersby, including some who ran out from their homes to greet him, he handed out images of saints — santini. 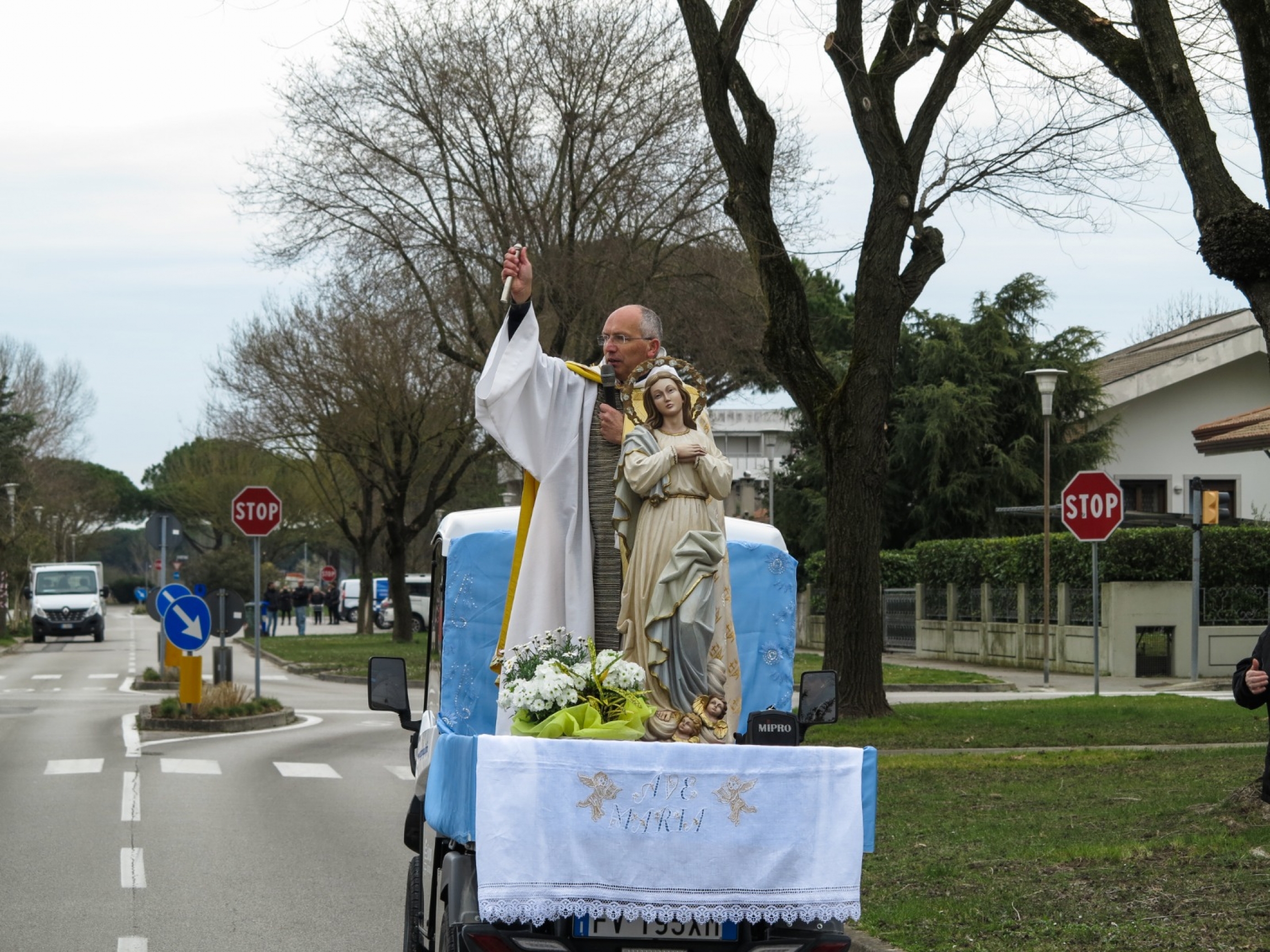 Rev. Andrea Vena, the priest of Bibiano, a small town on the coast near Venice, Italy, loaded a statue of the madonna on a three-wheeled car and set off along the streets of his town one March morning.

Another priest decided to bring “all glory to God in the sky,” literally. With a pilot's license and a small plane at his disposal, he flew over an area heavily hit by the virus and “dropped” blessings.

In a small town in Lombardy, Rev. Giuseppe Corbari asked his worshippers to email him their photographs, so that he could stick them on the pews and not feel alone in his church. He printed them out in color, and got so many that he ran out of toner.

Theologians and scholars of Christianity are observing how this difficult historical moment is fostering a revolution comparable to that which occurred in the 13th century with the arrival of the mendicant orders, like the Franciscans.

Rev. Paolo Benanti, a Franciscan and professor of the ethics of technology at the Pontifical Gregorian University of Rome, argues that new forms of "popular devotion" are on the rise. He describes it as a "bottom-up process" that can reconnect the church, anchored in its institutions, to the people.

“It’s as though we’re moving from an old Austrian waltz to a tango, where you have a bit more improvisation, and also much more cheek to cheek.”

“It’s as though we’re moving from an old Austrian waltz to a tango, where you have a bit more improvisation, and also much more cheek to cheek,” Benanti said, playing with the idea that the current pope is Argentinian.

Benanti says the most important “piazza” where this revolution is now taking place is the digital world. And the majority of priests have in fact expressed their creativity online. Many celebrate Mass in their empty churches in front of a camera and stream them live on YouTube channels or Facebook.

Some priests say that this means they can reach even more people, beyond their parishes.

Chiara Canonici, who works in a bookstore in Turin, is taking this opportunity to reconnect with the parish in the coastal town where she comes from, Sinigallia, and attends Mass on Facebook together with old friends. “I can't say it's the same thing as going to church, but for me, it's a way of feeling closer to my community," she said.

Every Sunday since the epidemic hit the country, a few minutes before 6 p.m., Canonici sits on her living room carpet, turns on the computer and gets ready spiritually. “It reminds me that for the Christian faith, Sunday is a day that’s different from the others. Living in isolation, all days are alike, and this reminds me that Sunday must be sanctified,” she said.

Yet, not all priests agree with the use of social media to stream Mass. Some of them fear that on Facebook, sacred rites might get confused with entertainment, and therefore prefer not to celebrate them at all.

This is the case for Rev. Luca Peyron, in Turin. On Palm Sunday, when he would normally celebrate Mass, he sat next to the altar with his vestments on, in silence.

Related: For this year’s Passover Seder, to Zoom or not to Zoom?

The Mass was canceled, but the church remained open and five people came to pray that day, several meters apart. There were no sounds other than those of knees bending on squeaky benches, throats clearing and a few cars passing by outside. 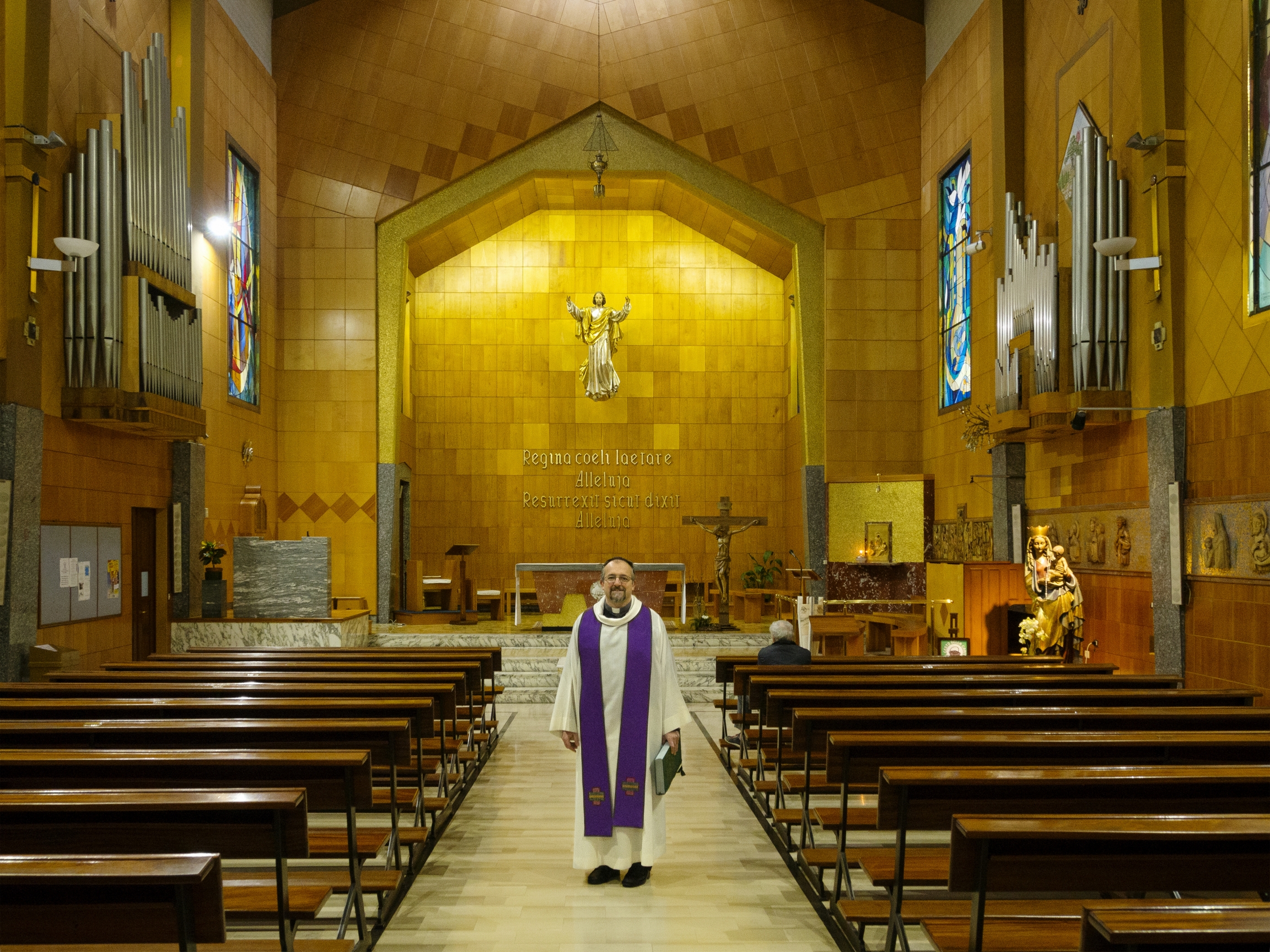 Rev. Luca Peyron is shown in his church in Turin, Italy.

Nevertheless, Peyron is using digital tools extensively, especially to maintain a personal dialogue with members of his community. Among them are some doctors and nurses who are facing extremely difficult circumstances in COVID-19 hospital wards.

“Some are devastated by the fact that they cannot even hold the hand of a dying patient. I'm communicating with them using all the tools that allow you to see their faces, a phone call is not enough. And so, blessed be the digital.”

“Some are devastated by the fact that they cannot even hold the hand of a dying patient,” Peyron said. “I'm communicating with them using all the tools that allow you to see their faces, a phone call is not enough. And so, blessed be the digital.”

“You’ve got to see the color of a face, to look into a person’s eyes, see the expression on a face, because sometimes these are what reveal a pain that words have trouble expressing.”

Despite his effort to shorten the distance from his congregation in symbolic ways, Peyron believes that the void everyone has to cope with in this time of pandemic is an opportunity for spiritual awakening.

Rev. Gianni Ghiglione, another priest from Turin, agrees with him, noticing parallels to a solemn time in Christian liturgy: the period known as Lent. “Like it or not, we are all living a huge Lent, fatigue, penitence, fear, loneliness, anguish sometimes,” he said.

This crisis has confronted people with some of their greatest fears, and forced them to reflect on what’s most meaningful in life. It puts everything in a new perspective.

“A petty little thing is bringing the world to its knees, maybe we find out that we weren't such superhumans.”

Ghiglione hopes that this feeling, this understanding — that we’re not immortal  — will survive the virus. And with this thought, while Italy is flattening its curve, he prepares for Easter, the reawakening.