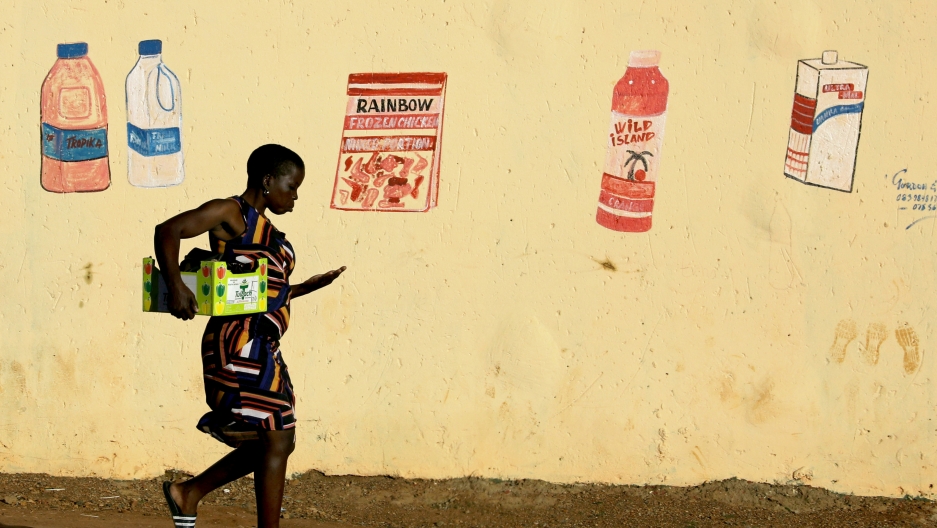 A woman counts her change as she leaves a convenience store, or "spaza shop," with a mural depicting grocery items, during a nationwide lockdown for 21 days to try to contain the coronavirus disease (COVID-19) outbreak, at the Elias Motsoaledi informal settlement, South Africa, April 7, 2020.

When it became apparent that South Africa could have the most cases of coronavirus on the continent, the government took swift measures to stop it. Those measures, which included a nationwide lockdown and rapid increase in testing, have received mixed reviews.

As some South Africans retreated to the comforts of their homes to slow the spread of COVID-19 or recover from it, reports of violent police enforcement and panic buying at supermarkets consumed the news — foreshadowing, perhaps, how the experience of the coronavirus pandemic in South Africa might be as unequal as the country itself.

Related: As the coronavirus spreads, poor communities in Kenya are left vulnerable

For Liesbet Van Cappellen, a Belgian jewelry designer who moved to South Africa more than 20 years ago as a child, the government has done a good job of dealing with the pandemic. She lives in the trendy, middle-class neighborhood of Woodstock, a gentrified, historic suburb of Cape Town.

“You can actually describe it a lot like Brooklyn. So it’s a bit, like, right outside of the big city. But more worn down, but very creative, young people moving here,” she said.

She believes her own coronavirus ordeal began at a party she attended on March 12. “The people that were there mostly came from Europe: Ireland, England, Scotland, France, Italy,” said Van Cappellen, who estimates about 150 people had attended the party, including some who took off work in order to fly into South Africa.

Related: African countries restrict travel in bid to slow spread of the coronavirus

A day after the party, on March 13, the World Health Organization declared Europe the new epicenter of the coronavirus pandemic. South Africa had already confirmed a few dozen cases of the coronavirus, mostly from people traveling from Europe and the United States.

While the news of the virus certainly lingered, the chance of getting infected still seemed like a distant possibility in a country of more than 58 million people.

“We were definitely talking about it. It was definitely hanging in the air. We didn’t hug as much as we used to,” said Van Cappellen, who recalls leaving the party at around midnight. “You still think it’s far away, and that’s the danger about it."

Reality would come sooner than expected. Days after the party, Van Cappellen started to feel the telltale signs of the virus. “I was experiencing a high fever, shivers, headache, body aches. My cough started happening, and also the pressure on my lungs,” she said. Van Cappellen also notes how she immediately started self-isolating with her husband and sent her housekeeper and gardener home. Van Cappellen continues to pay them, however.

After one of her friends tested positive for the virus, Van Cappellen and her husband were able to go to a drive-through testing site, one of many set up in South Africa. Both tested positive for COVID-19 and were sick for about two weeks. “We were literally in bed the whole time,” explained Van Capellen, who said they were told to take regular painkillers.

A week after her diagnosis, South Africa went into crisis mode, declaring a 21-day nationwide lockdown. It’s not lost on Van Cappellen how fortunate she is. “We are very privileged to be able to do it. We still have income. We have money in our bank. We can order something which is fantastic.” 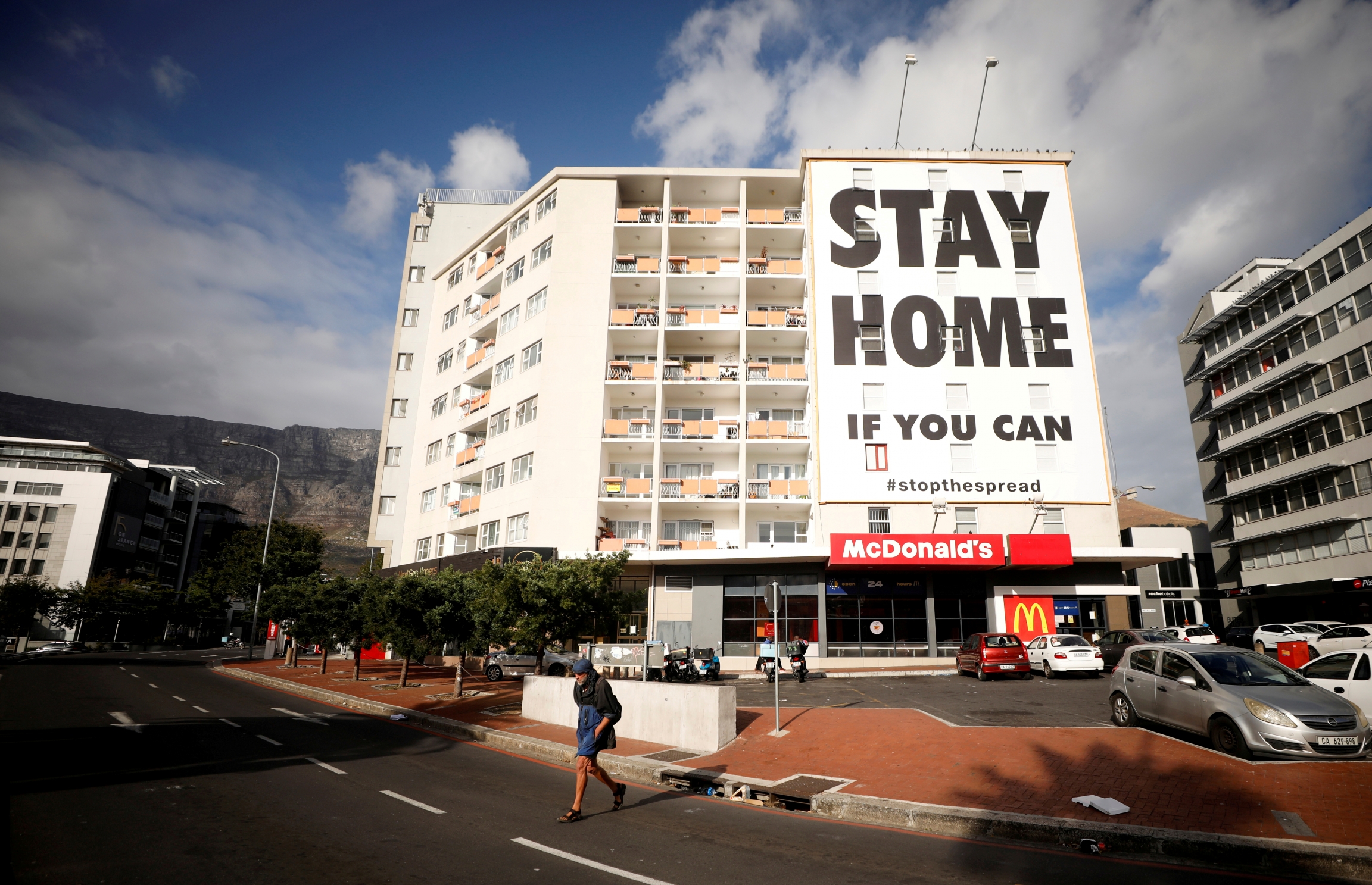 A man walks past a poster covering the side of a building ahead of a 21-day lockdown aimed at limiting the spread of coronavirus disease (COVID-19), in Cape Town, South Africa, March 26, 2020.

On the opposite side of the country, in the capital city of Pretoria, Pinky Mashiane, a domestic worker, was already seeing the disparity.

As the government puts policies in place to limit movement, domestic workers, including professionals such as house cleaners and gardeners, are finding themselves the first to be let go.

“There are also those kept by employers in their properties against their will,” said Mashiane, who has been receiving calls of panic from some of her union members. “Employers are saying you aren’t going home because you will make us sick if you go to your families.”

When it comes to employers' concerns that domestic workers will infect them, Mashiane is quick to point out the irony.

“Because there are domestic workers that will get it from their employers, who are traveling,” she said.

Before South Africa’s shutdown went into effect, Mashiane sent domestic workers to the country’s Department of Employment of Labor, to formally complain about being laid off without payment. Officials punted them back to their employers, telling them to demand payment. “The employer told them: We are not going to pay anything,” Mashiane said.

According to Mashiane, this isn’t the first time domestic workers have received the short end of the stick. South Africa has an estimated 1 million domestic workers, but their rights are often violated by employers. In fact, until recently, domestic workers weren’t eligible for compensation for workplace injuries.

“We still have some places, areas where we know these employers don’t comply at all with the law,” Mashiane said. “There’s no domestic workers earning anything close to the minimum wage.”

While the South African government has promised some financial relief, including through an unemployment insurance fund, that initiative could take weeks to sort out. Last month, Mashiane created a GoFundMe account to start fundraising on behalf of domestic workers in need of immediate relief.

Still, Mashiane criticizes what she sees as a chronic disregard for the welfare of domestic workers from the highest level of government — itself a stark reminder of the country’s racial and economic inequalities.

“I think everybody knows that most domestic workers are women,” said Mashiane. “And here in South Africa, they are mostly black,” she continued.

“It’s as if we are not visible to the president. He doesn’t say anything to us. And officially we are the ones who are vulnerable,” Mashiane said. “Domestic workers are very important for South Africa. Because we make other people’s work easier."