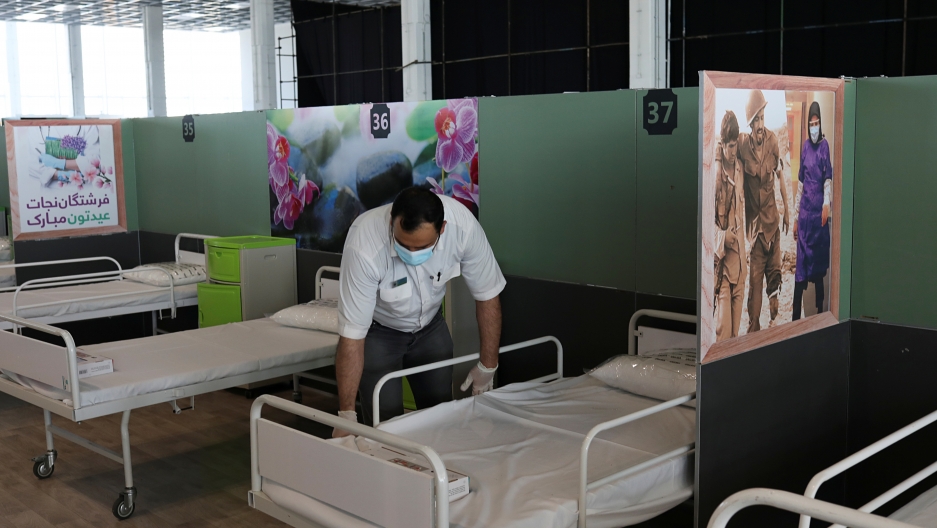 A medical aid worker sets up and installs a bed at a shopping mall, one of Iran's largest, which has been turned into a center to receive patients suffering from the coronavirus disease (COVID-19), in Tehran, Iran, April 4, 2020.

Omid Shokoohi has lost count of the number of days he’s been at home.

“At first, the government said, ‘Stay home for two weeks',” he said. “Then, another two weeks. And another. It never ends.”

Shokoohi lives in Tehran, Iran’s capital. Before the pandemic, he worked as a tour guide and made a decent living — enough, he said, to allow him to set aside some savings. Now, his life has been turned upside down. His business is dead, and he’s lost all his clients.

Iran saw its first case of COVID-19 in February. Since then, approximately 58,226 people have been infected and 3,603 people have died, according to Johns Hopkins University, which is tracking cases worldwide.

The government of Iran has placed restrictions on movement to slow the spread of the virus by closing shops, schools and places of worship to urge people to stay at home. But it has not yet imposed an official lockdown, and some critics say the Iranian government did not take action soon enough.

The country’s parliament speaker, Ali Larijani, is the latest official to fall victim to the disease.

For Shokoohi, the worst part is not knowing when he can get back to work. Meanwhile, the prices of goods go up by the day. Bananas, for example, cost twice as much as they did two weeks ago, he told The World.

“That’s a lot. I’m lucky I have some savings. What about the daily wage workers? How can they survive?” Shokoohi said.

In a video circulating online, a street vendor asked that same question. He said he works near a busy metro station in Tehran.

“But the police come here every day and tell me I must go home,” he said. “How can I feed my family if I go home? I’m poor.”

Last week, Iran’s government announced a $5 billion financial relief package for low-income families and businesses impacted by the coronavirus. But President Hassan Rouhani made it clear that the country will likely be dealing with this pandemic for months to come.

Iran’s economy was already hit hard before the outbreak, partly because of heavy economic sanctions imposed by the United States. Last year, Iran’s unemployment rate was roughly 12%. And while some people are wondering whether they can survive financially, others are struggling to overcome the disease.

Behzad Meygooni is one of the thousands of Iranians who have contracted COVID-19. In an interview with The World, the 41-year-old said he is slowly recovering.

“I’m just thankful I survived, that I can breathe again.”

“I’m just thankful I survived,” he said, “that I can breathe again.”

Meygooni works for the Tehran municipality. He thinks he got infected in February, when Iran was holding parliamentary elections. He was an observer at one of the polling stations.

Shortly after, he started showing symptoms: loss of smell, fever and shortness of breath. He says the doctors told him to rest at home. He spent 20 days in isolation, sick and in bed. The nights were the worst, he said. He’d have coughing fits so bad, he wondered if he would make it to the morning.

“I always thought I’d be the last person to get sick,” Meygooni said. “I work out every day. I hike on the weekends. I eat healthy. But this disease…it’s no joke.”

At this point, the coronavirus pandemic has touched almost every country in the world. But until last month, Iran and Italy had some of the highest numbers of cases outside of China.

For Maziyar Ghiabi, who studies public health and politics, this pandemic is also providing him with plenty of research material. Ghiabi’s parents live in Lombardy, one of the hardest-hit areas in Italy. And his grandparents and cousins live in Arak, a city close to Qom, the epicenter of the outbreak in Iran. Ghiabi himself lives in the United Kingdom.

They’ve all been trading stories about life under quarantine.

“I just disinfected a tub of ice cream before I put it in the freezer,” a cousin tells him in an audio message recently.

“In a way, I [am] living in two areas exposed to the epidemic which had government responses in the initial stages of the contagion, which were very slow, reluctant to take any measures and also quite in denial,” Ghiabi said.

He is already coordinating research projects with his colleagues in Iran. It’s the first time, he said, he is studying his own lived experience.