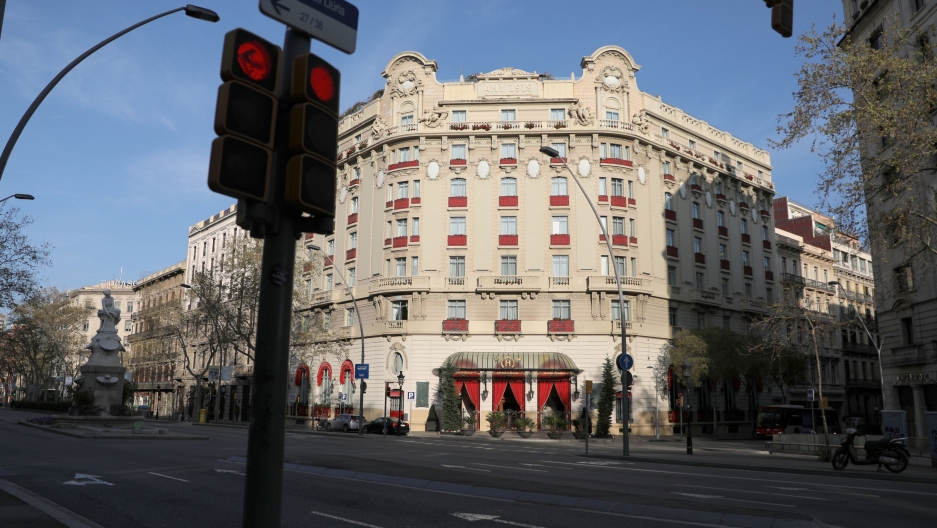 El Palace Hotel is seen after Spanish government ordered the closure all hotels as part of a 15-day state of emergency to combat the COVID-19 outbreak in Barcelona, Spain, March 20, 2020.

Adapting to life within a radius of just a few miles from home has become a necessity in Spain.

With approximately 47,000 confirmed cases and 3,434 deaths as of March 25, Spain is just behind the United States in terms of raw figures, and second to Italy in Europe. Spain declared a state of emergency on March 14, which will be in place until at least April 12.

More than a third of Spain’s coronavirus cases have been registered in Madrid, the capital, and many hospitals are at breaking point. Prime Minister Pedro Sánchez has said the public and private sectors are both expected to help Spain’s escalating battle with COVID-19.

More than 5,400 health workers have contracted the virus, with many complaining they lack protective equipment.

That means private hospitals are now under the control of local governments, and Spanish luxury brands like Balenciaga are making face masks.

Juan Oliva, an economist at the University of Castilla La Mancha who specializes in healthcare systems, said it was “completely normal” for public hospitals to contract out certain services to private centers.

“The public system is under a lot of pressure, close to buckling almost. The health authorities and private centers have been looking for ways of collaborating, and both sides were willing to do this."

“The public system is under a lot of pressure, close to buckling almost. The health authorities and private centers have been looking for ways of collaborating, and both sides were willing to do this,” he added.

Emergency rooms at public hospitals across the country are filled with patients needing immediate care, and prior to the lockdown announcement, there was an outcry over private hospitals sitting half-empty, and refusing to admit coronavirus cases.

This partial nationalization is temporary, Oliva explained, though the details of whether the government will have to pay for the use of private facilities have not yet been made public.

Oliva is himself on lockdown and working from home, with one family member confined to a single room with coronavirus symptoms.

“In Spain, we have never been asked to stay at home like this before. We have never had restrictions on the movement of people like this, where they can only go out to buy food or for some people to go to work,” he said.

Over the last week, the lack of intensive care spaces has forced the government to get creative. A massive conference center on the outskirts of Madrid has been requisitioned and turned into a field hospital. The Madrid ice rink is now being used as a morgue. Milder cases are being sent to hotels turned makeshift hospitals.

At Las Provincias hotel in southern Madrid, reporters were not allowed inside, but The World spoke to hotel manager Carlos Martín in front of the building, as he waited for the first patients to arrive.

“We have 99 rooms. We don't know really how many patients they're going to have here. We only know that it's going to be about 50 people working here from the hospital. ... We are trying to help them as much as we can.”

“We have 99 rooms. We don't know really how many patients they're going to have here. We only know that it's going to be about 50 people working here from the hospital,” he said. “We are trying to help them as much as we can.”

Martín had already sent staff home ahead of the ambulances’ arrival, he said, and the only thing left to do was hand over the keys. 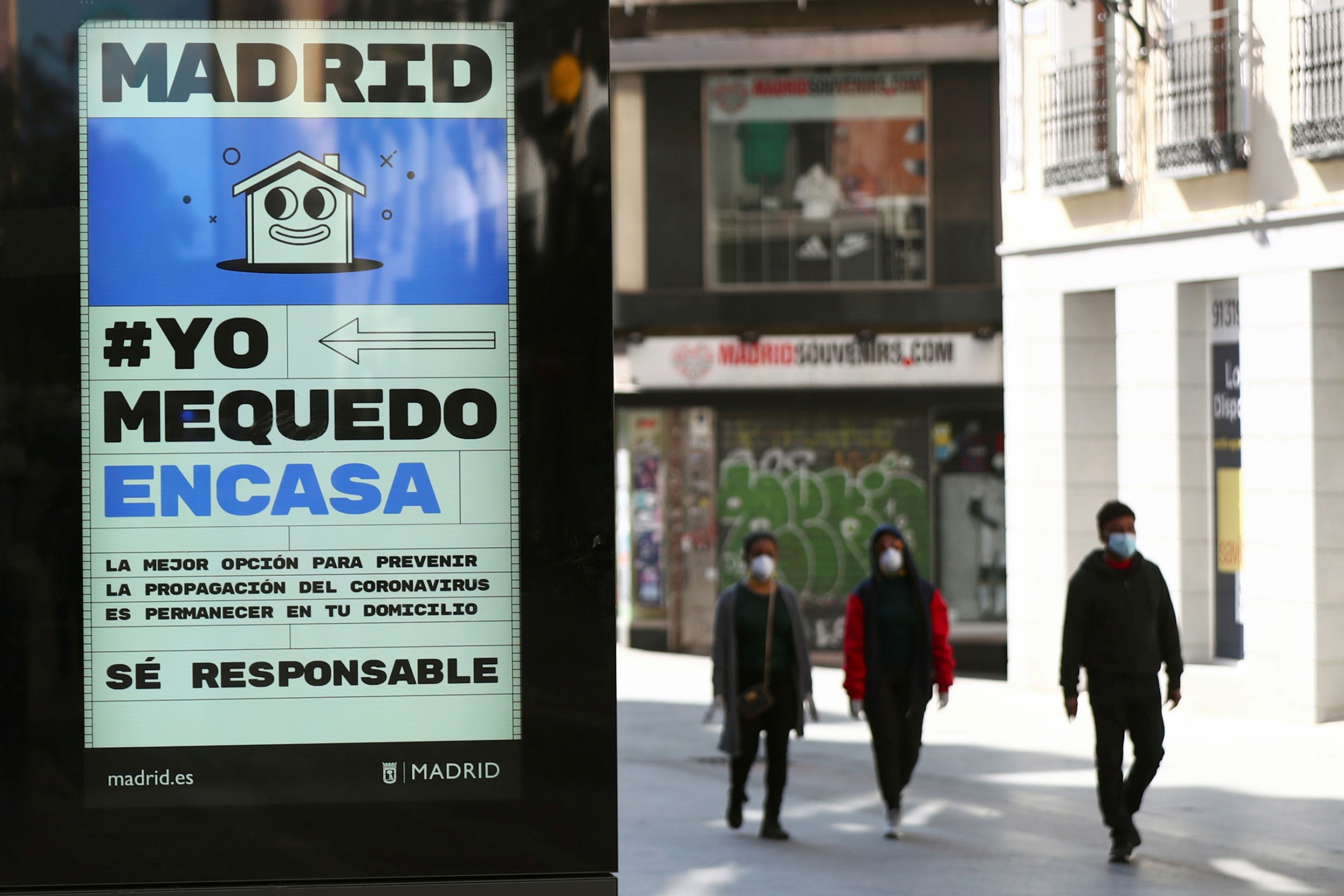 An ad advising people to be responsible and stay home is displayed at the almost empty Preciados street due to the coronavirus outbreak in central Madrid, Spain, March 14, 2020.

The effect of confinement in Madrid — where lives are usually lived at maximum volume on streetside terraces and neighborhood bars — has been dramatic. City squares are so quiet during the day that birdsongs can be heard.

The only interruption comes from the wailing sirens of police and ambulances.

The phrase quedate en casa ("stay at home") is hashtagged on road signs, TV shows and across social media, as the government exhorts citizens to stay put to slow the spread of the potentially deadly coronavirus.

Brief excursions to buy food or medicine are now the only reasons anyone not classified as a “key worker” should be out, the government has said. That contrasts with France or the United Kingdom, where exercising outside alone is still permitted.

Cycling to the local baker to pick up some freshly baked bread is one of the great pleasures of living in Madrid. But many such mundane activities are now considered criminal offenses in Spain.

The police pulled Fran Panadero just over 50 feet from his home and demanded to know where his loaf was procured. They had followed him down the street.

“They didn’t like the fact that I was out buying bread in a place that was not right next to my house … right from the first moment, the attitude of the police was that they were going to fine me."

“They didn’t like the fact that I was out buying bread in a place that was not right next to my house … right from the first moment, the attitude of the police was that they were going to fine me,” he said. The fine could be up to $32,000 — a sign of how serious the situation has become in a country where that figure is well above the average annual salary.

Children don’t quite know what to make of school lessons via TV and online, now that schools have been closed, and what the rules of the lockdown mean for milestones they would usually celebrate.

One 6-year-old named Carmen tweeted a message to the police, with the help of her parents, to ask if the tooth fairy was still allowed to visit. Luckily the tooth fairy in Spain is a mouse named Perez, so he was exempt on the grounds that he could not catch the virus.

Although the city is transformed, Madrid’s nocturnal habits have not completely changed.

At 8 p.m. every night, everyone stands on their balconies and applauds the health workers risking their lives to stop the virus from spreading.

Then the lockdown parties begin.