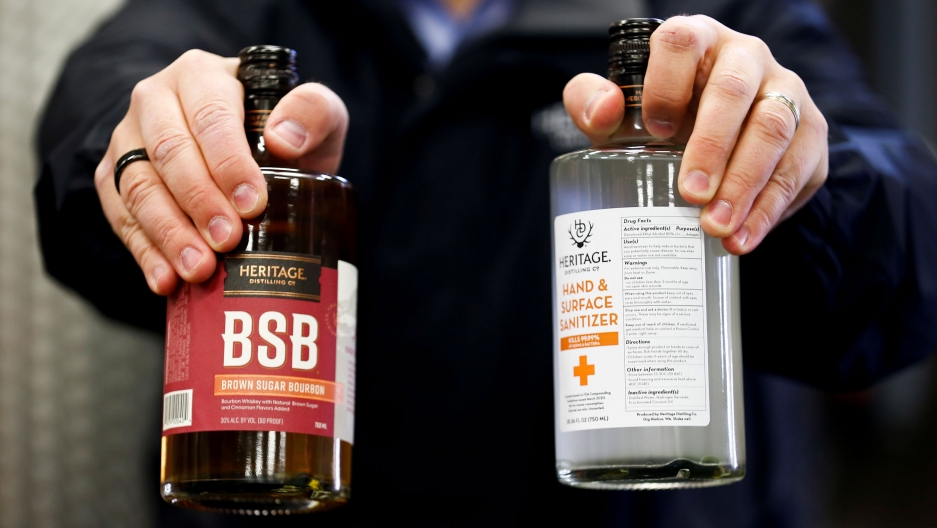 Heritage Distilling CEO and Co-Founder Justin Stiefel holds a bottle of Brown Sugar Bourbon and the hand and surface sanitizer they have begun to make in its place at Heritage Distilling during the coronavirus disease (COVID-19) outbreak in Gig Harbor, Washington, March 22, 2020.

Many places around the world are synonymous with their alcoholic beverage of choice — German beer, Kentucky bourbon, London dry gin. Now, many producers are adding hand sanitizer to their production line.

Alcohol distilleries around the world have shifted production to the now highly-valued commodity as health professionals have pushed increased hygiene practices in the face of the spreading COVID-19 pandemic. A reminder: Alcohol-based hand sanitizers are good in a pinch, but the United States Centers for Disease Control and Prevention still recommends using soap and water as a first choice.

Verdant Distillery in Dundee, Scotland, is one of a number of craft distilleries in Scotland that switched production from gin to hand sanitizer last week in the wake of the coronavirus outbreak.

“When we started with this idea, we thought we would produce 100 liters and that would go to local surgeries, care homes or the like. ... And then the floodgates opened."

“When we started with this idea, we thought we would produce 100 liters and that would go to local surgeries, care homes or the like," said distillery owner Andrew Mackenzie. “And then the floodgates opened. Emails were coming in from every source you can think of. I got an email ... from the Netherlands asking me if I could provide five, 40-foot containers full of sanitizer. And so there is just such a huge demand for it everywhere.”

Demand for Verdant's original product, on the other hand, has been put on hold due to the pandemic. “The gin market at the moment for us is pretty much zero,” Mackenzie said.

But one of the initial problems Mackenzie and others have faced is regulations and taxes.

Verdant Distillery was initially still liable for the nearly $30 duty on the alcohol used to make the hand sanitizer. That issue was resolved Monday night, Mackenzie said.

In the US, the Alcohol and Tobacco Tax and Trade Bureau said it would waive permits for distilleries to make hand sanitizers according to the World Health Organization standards. The Food and Drug Administration issued similar guidance, saying in response to the emergency and unprecedented demand, it would not take action against companies that are making hand sanitizers without being recognized as drug manufacturers.

Elsewhere in the world locally and globally recognizable brands are doing their part to supply the demand for sanitizers.

The latest craft products coming out of Greenhook Gin and St. Agrestis in Brooklyn, New York, are artisanal hand sanitizers. Manufacturers have been barred from on-site sales, so the companies have partnered on delivering their product after the State Liquor Authority relaxed rules on alcohol to-go.

Tomorrow we rest but we start back up on Monday delivering our products and @StAgrestis products to your doorstep. All orders come with a free hand sanitizer. Link in to order in our… https://t.co/pb3FE8LMLg

In Uganda, Waragi — domestic alcohol akin to moonshine — has its own reputation of potency. Manufacturers have agreed to use the industry's nearly 2 million gallons of ethanol and alcohol to make affordable sanitizers, while the government will waive VAT and excise duty.

Ugandan Waragi manufacturers have agreed to convert 7.3million litres of Ethanol into hand sanitizers. On change govt is to give them a tax waiver. #COVID-19 #Monitorupdates #Ntvnews @DailyMonitor pic.twitter.com/M2So7ITvxg

In Cataño, Puerto Rico, Bacardi rum producers are working with Olein Refinery to crank out more than 1.7 million units of hand sanitizer.

SAN JUAN, Puerto Rico – The Bacardi Corporation distillery in Cataño, Puerto Rico, where more than 80 percent of the company’s rums are produced, has partnered with Puerto Rico based manufacturer Olein Refinery https://t.co/c7d1egOAfq pic.twitter.com/8VfgkKcm5O

The company will use one of its Brazil beer breweries to produce half a million sanitizer bottles for public hospitals to fight the spread of coronavirus. https://t.co/hdPDSKrueq

And in France, LVMH Group, whose portfolio includes brands like Louis Vuitton, Dior and Givenchy, has turned its perfume production into hydroalcoholic gel manufacturing. LVMH is also using its global supply chain to help France acquire 40 million surgical masks via an industrial supplier in China.

#LVMHjoinsforces and says a special THANK YOU to all those involved in the manufacturing of #HydroalcoholicGel, in particular to its exceptional production teams from @Guerlain, #DiorParfums and @ParfumsGivenchy showing great solidarity and engagement for the common good. pic.twitter.com/i5pPkh1H5s

Click the audio player above to hear more from Andrew Mackenzie at Verdant Distillery in Dundee, Scotland.