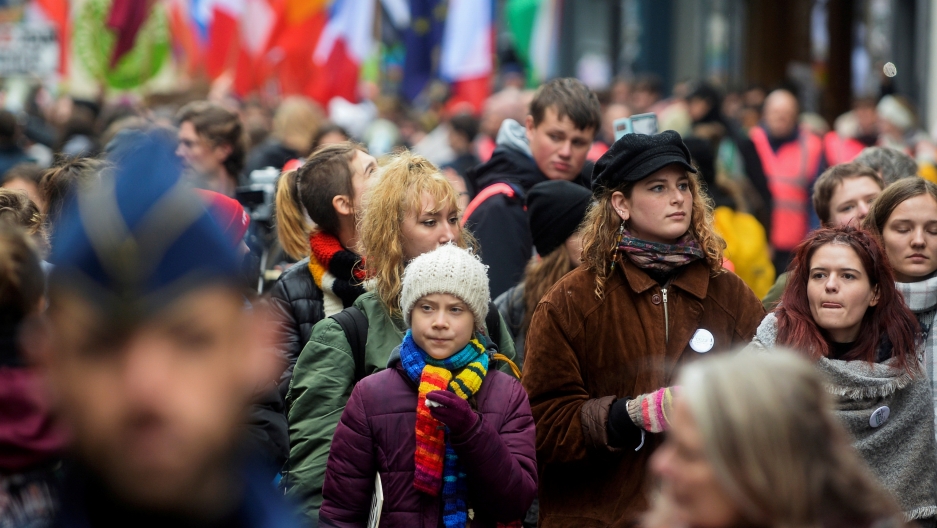 “Every crisis deserves to be treated as a crisis,” Greta Thunberg posted online this month when she announced that her weekly school strike — organized through her Fridays for the Future — was going virtual due to the coronavirus pandemic.

Thunberg draws a clear connection between the climate crisis and the current pandemic.

Related: How a Caribbean island nation is trying to become climate resilient

And some of those parallels are clear. Both pose grave threats to the health and well-being of billions of people, and both call into question fundamental aspects of our society: How can we reconfigure the economy? How do we make high-stakes decisions about complex problems with high levels of uncertainty?

The connection between climate change and the pandemic has become increasingly clear in recent weeks. Since the virus began to spread from China throughout the world, experts have witnessed massive drops in carbon emissions and pollution in the hardest-hit countries — although the lauded environmental benefits will likely be short-lived.

In February, China’s carbon emissions dropped by 25% compared to the same time last year, according to data from the Center for Research on Energy and Clean Air.

The drop in China primarily comes from a decrease in coal-fired electricity generation, then manufacturing industries, and then aviation, Dahiya said. Coal consumption in China is down 36%, and construction has been halted in many places, reducing the need for steel, concrete and other materials.

Duniya said he expects to see similar decreases in Europe, South Asia, the Middle East and the United States — practically everywhere — as the virus continues to spread and halt industry and travel.

“Global CO2 [carbon dioxide] reduction will depend on how much each economy is dependent on the use of fossil fuels,” he said.

Air pollution is also down in affected countries. Pollutants associated with cars, like nitrous oxide and particulate matter, saw steep declines in China and northern Italy, decreasing by up to 30% of their normal values.

“I think that in human history, in the past few centuries at least, we could not observe something like this. ... It’s really a sudden shock, and it’s really concentrated.”

“I think that in human history, in the past few centuries at least, we could not observe something like this,” said Marco Percoco, a transportation economics researcher at Bocconi University in Milan, Italy. “It’s really a sudden shock, and it’s really concentrated.”

While reductions in pollution and carbon emissions may seem like a silver lining of the pandemic, experts say the benefits will be short-lived — and may actually backfire.

Drops in emissions from previous economic recessions have always returned to their pre-recession emission levels. Duniya said China has already started increasing emissions as the number of new virus cases has leveled off.

“The current decline in global emissions is not a development we should be happy abou. ... This is happening because of a major economic meltdown, and not as a result of well-designed energy policies.”

“The current decline in global emissions is not a development we should be happy about,” said Fatih Birol, the director of the International Energy Agency in Paris. “This is happening because of a major economic meltdown, and not as a result of well-designed energy policies.”

Despite the bleak picture, Birol does see a possible climate solution amid the pandemic crisis — through economic stimulus packages. The United States and the European Central Bank are planning packages worth hundreds of billions of dollars.

Birol said he is asking governments to include large-scale renewable energy investments in those packages.

The levels of global and local coordination needed to avert COVID-19 devastation are familiar to those standing at the frontlines of climate change for decades.

The current upheaval and rapid response have inspired ideas for similar mobilization for the climate.

“We’re seeing profound changes in habits and behaviors, the mobilizing of massive resources and a level of global coordination that we haven't seen before. ... This is highly relevant to climate action.”

“With the coronavirus, we have a focusing of global attention on one single topic that really rarely happens,” said Otto Scharmer, a lecturer at Massachusetts Institute of Technology and founder of the Presencing Institute, which focuses on societal change. “Once you have that focused attention. Almost anything is possible."

“We’re seeing profound changes in habits and behaviors, the mobilizing of massive resources and a level of global coordination that we haven't seen before,” Scharmer said. “This is highly relevant to climate action.”

The coronavirus is also shedding light on the vast inequalities in global health systems, Scharmer said, which is also true of climate change.

Ultimately, he says, the coronavirus crisis forces everyone in the world to reevaluate their values and consider the ways that society could look different — which could be a boon for large-scale climate action.

“The crisis allows us to reimagine not only our personal lives but really our civilization,” Scharmer said. “Our economy, our democracy and our learning systems. Those are the conversations I think we should be having now. ... That re-imagining could put us into place to really take action around climate,” he said, “and addressing some of the deeper root issues, instead of reacting to the symptoms."