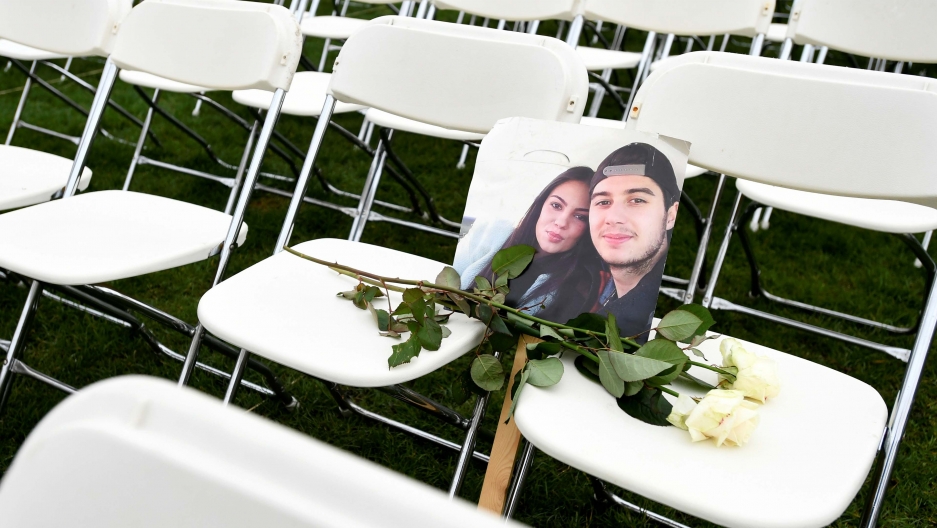 A picture of victims of the MH17 crash Bryce Fredriksz, right, and Daisy Oehlers rests on empty chairs during a protest outside the Russian Embassy in The Hague, Netherlands March 8, 2020.

Dutch prosecutors accused Russia on Tuesday of trying to sabotage the investigation into the downing of Malaysian Airlines Flight 17 in Ukraine in 2014, saying this cast "a dark shadow" over the impending trial of four suspects in the crash.

Pre-trial hearings began in Amsterdam on Monday. Prosecutors say the defendants — three Russians and a Ukrainian — helped arrange the Russian missile system used to shoot down MH17, a civilian aircraft.

All 298 people on board were killed. Most of the passengers were Dutch nationals.

Seline Frederiksz plans to be in the courtroom every day. Her son Bryce died in the plane crash in 2014, along with his girlfriend, Daisy. She spoke to The World's host Marco Werman as the trial opened this week.

Marco Werman: Seline, you've spoken with us several times and this never gets easy to talk about. What is on your mind today as this trial begins?

Seline Frederiksz: It's been a long day, two long days. The first day was very emotional. Today was exhausting because it's a long day, and you have to keep focused and you hear so many things. Well, I think I have a positive feeling after those two days.

What gives you the positive feeling?

The names have been read out loud, yesterday, of all the victims.

That must have been an emotional moment.

It really was. Yes. But it was also necessary. It felt very good at the start of the process, gave kind of a relief.

I know you've been waiting for this trial to start for several years now.

Did it feel good that it finally started?

Yes, it did. We heard last year that the dates [would be on] the 9th of March, and we were really looking forward to this date.

So I gather relatives are given the right in this case to address the court and you'll be doing that. What kind of testimony will you be giving?

Not every family wants to speak to the court publicly. Why do you want to?

And has that been a source of support for each other?

Yes, very much. Like now when the trial started, we're all together. It's very helpful. We talk about it together and the missing and the grief and the pain. We can talk about it. We're in contact on a daily basis for years now. We have contact with lots of family also in the UK and Australia.

So as you know, Russia has denied any involvement in the MH17 targeting. Even though there's substantial proof that Russia was behind it. Additionally, the four suspects are still at large. What can give you closure of the loss of your son and the other victims of this tragedy?

Do you want the suspects in jail, behind bars?