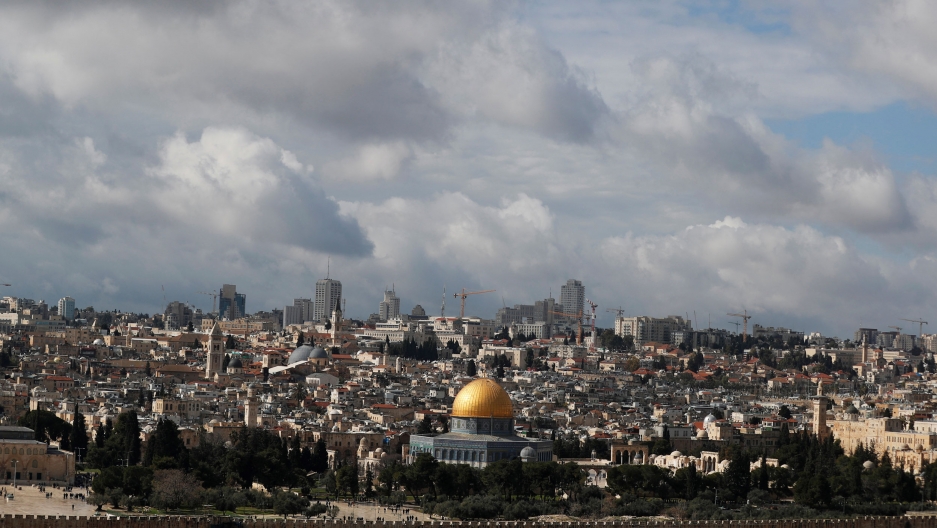 The Dome of the Rock on the compound known to Jews as Temple Mount and to Palestinians as Noble Sanctuary in Jerusalem's Old City, January 2020.

Rising across Jerusalem to the edges of the Old City, a new cable car plan that passes over the Palestinian territories has sparked controversy and is now being challenged in Israel’s top court.

The cable car intends to tackle intense congestion caused by tourism in the heart of Jerusalem, where millions of people come to visit some of the world’s most sacred sites to Christians, Jews and Muslims. Even away from holy days, horns blare and fumes rise outside the city walls as congestion takes over the streets.

Related: US sides with Israel on settlements

“The cable car is designed to address the problem of congestion and accessibility that exists in the southeastern basin of the Old City, given the significant increase in tourist traffic to Israel."

“The cable car is designed to address the problem of congestion and accessibility that exists in the southeastern basin of the Old City, given the significant increase in tourist traffic to Israel,” the country’s tourism ministry said in a statement sent to The World.

In the shadow of Jerusalem’s famed Al-Aqsa Mosque, visitors usually have to weave past police and shopkeepers to disappear under the walled city’s Dung Gate to reach the Western Wall and the Temple Mount complex that sits above it.

Some 4.55 million people visited Israel last year, according to the tourism ministry, many of whom join Jerusalem coach tours that drop their passengers off at one of the Old City’s seven open gates.

The buses have become an ever-present sight around the city, often crawling through the traffic Israeli authorities are trying to ease. They see a cable car as a key component, with the planned ride carrying around 3,000 people an hour in each direction.

The 1,400-meter route will start in West Jerusalem at First Station, a community space with bars and restaurants, and head northeast towards Dung Gate. There will be a second stop before rising above a hillside where sheep occasionally graze, and touching down on Mount Zion.

After the station at the hilltop, which is traditionally known as the site of Jesus’ Last Supper, the cable car will embark on the most controversial part of the route: Reaching East Jerusalem, it is set to pass over the Palestinian neighborhood of Silwan, which lies just south of the Old City.

Israel occupied East Jerusalem in the 1967 Six-Day War and later annexed it, claiming the entire city as their capital in a move unrecognized by the international community. Infrastructure projects in the area are therefore opposed by Palestinians, who see the eastern part of the city as their future capital.

In a Silwan convenience store, shopkeeper Ahmed Shawky was adamant the project could not go ahead.

“It will bother the residents. Where is it going to cross? Above their houses, right?”

“It will bother the residents. Where is it going to cross? Above their houses, right?” he said, smoking a cigarette behind the cash register.

“This is an area where people live, it’s not an area for tourists to go. There are other places where they can do it,” the 52-year-old added.

His store stands next to the City of David, an attraction and archaeological site run by the settler organization Elad. The excavations are seen by Palestinians as a further attempt by Israel to claim historical ownership of the land in and around the Old City.

“They’re controlling underground and also the sky now,” said Bayan Abbasi, a coordinator at the Madaa Silwan Creative Center, which runs programs for women and children.

Sitting behind her desk in Silwan, the 27-year-old Abbasi said the cable car scheme would only serve the settlement movement.

“I think it’s the wrong idea, because it will be above [residents'] houses, so there will be no privacy,” she said.

Neither the tourism ministry nor the Jerusalem Development Authority, which is implementing the $60-million project, agreed to an interview with The World.

In a statement, the JDA hailed the project as “a significant milestone in promoting Jerusalem and strengthening its status as a world tourism capital." The authority described the cable car as a green project that would overcome the hills and traffic of Jerusalem.

The venture was given the green light by Israel’s housing committee in November, a move described as “an illegal assault” by top Palestinian official Hanan Ashrawi.

“The Israeli cable car project is an obscene violation of the cultural, historical, spiritual, geographic and demographic character of Jerusalem."

“The Israeli cable car project is an obscene violation of the cultural, historical, spiritual, geographic and demographic character of Jerusalem,” Ashrawi wrote on Twitter.

The Israeli cable car project is an obscene violation of the cultural, historical, spiritual, geographic & demographic character of Jerusalem. It is also an illegal assault on the occupied Palestinian city & its people who have been living there for centuries. Stop #IsraeliCrimes

The cable car is now facing a legal challenge at the Supreme Court led by the Israeli nongovernmental organization Emek Shaveh, which says protocol was breached when the project won approval. The organization works to defend cultural heritage rights and protect ancient sites as public assets, according to its website.

As well as failing to address the impact a cable car would have on residents, Emek Shaveh argues that the committee should not have approved the project during a transitional government.

Israeli leaders failed to form a coalition government following elections in April and September last year, with a third poll slated for March 2. As a result, there are limits on the powers of Prime Minister Benjamin Netanyahu’s cabinet.

Yonathan Mizrachi, director of Emek Shaveh, said Silwan residents have also submitted their objections to the project and a combined hearing is expected at the end of June.

Related: In Israel's election, the Arab vote could be pivotal

The plans can continue despite the court case, although Israeli officials did not respond to questions about the latest construction schedule. Some recent reports say the cable car was due to be up and running by the end of the year, whereas the tourism ministry has previously said it would open in 2021.

Mizrachi, whose legal objection has been backed by dozens of scholars, said the new venture “shouldn’t happen at all.”

“I don’t see a place to compromise,” he told The World.

Emek Shaveh campaigns for people’s rights to cultural heritage and says the cable car is part of a broader government policy to impose “one dominant narrative” and Israeli control over the city.

“It’s a political project that’s going to change the character of historical Jerusalem,” he said.

“We’re talking about a city with dozens of layers and cultures connected to this city. The only way to live in this city is to appreciate its diversity.”