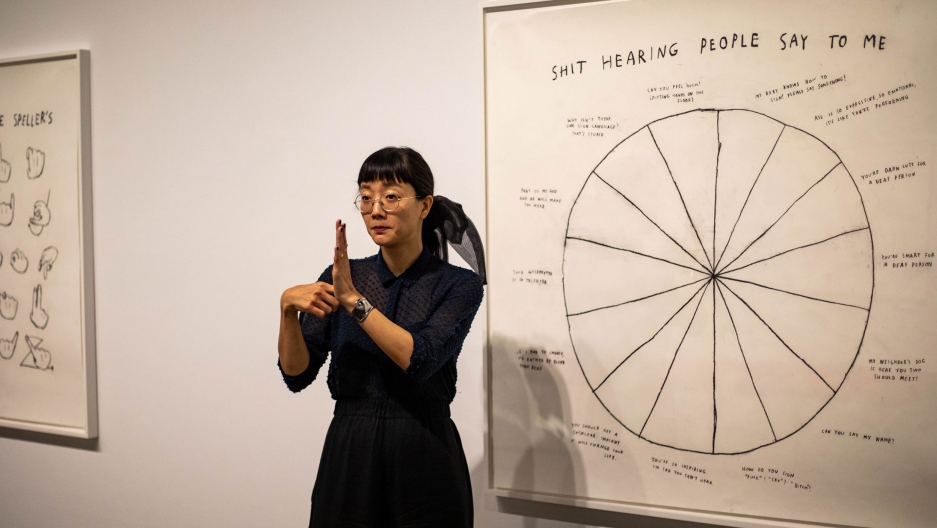 Note: This is a transcript of The World's radio story on Artist Christine Sun Kim, who uses American Sign Language (ASL). She spoke to The World through ASL interpreters. This transcript reflects the radio story in a format that is accessible to D/deaf and hard-of-hearing people. See the digital version of this story: Artist Christine Sun Kim on 'deaf rage,' the Super Bowl, and the power of sound

Host Marco Werman: If you were watching the Super Bowl this year, you may have seen two people performing the National Anthem.

Kim, who is Deaf, signed the words. She’s an Asian American artist who lives in Berlin.

And she is traveling the globe sharing her art, which explores what the world is like for people who can’t hear.

The World’s Lucy Martirosyan has our story.

She's Deaf with a capital D, meaning she's part of Deaf culture, a culture that carries a set of things like social beliefs and values that are influenced by deafness and sign language.

Kim sports delicate, round glasses, and she has straight black blunt bangs across her forehead. She's friendly with a deadpan sense of humor (sound of laughter) that matches her drawings.

Christine Sun Kim (CK): At that time in the 80s, it seemed acceptable to learn sign language. It was like a shift. There was a shift prior to that where parents were encouraged to, you know, oralism was the way to go

And by the way, ASL has nothing to do with English. It's even different than British Sign Language. And in Germany, where Kim is based now, there's its own sign language there. In total, there are some 300 distinct sign languages around the world. In many countries, though, there remains a stigma that if deaf and hard-of-hearing children learn to sign, they won't integrate properly into society.

But Kim says she doesn't buy this. Again, here's her interpreter.

CK: I truly believe American Sign Language is important because from the beginning, when a child is born, if they learn ASL, they have full access to information.

LM: But still, in the United States, 72% of families don't sign with their deaf children. And that's according to the organization the Communication Service for the Deaf. Kim was lucky because her immigrant parents from South Korea took up both English and ASL to communicate with their daughters.

CK: My sister is also deaf, so they had two good reasons to learn sign language. So I really I feel very fortunate, very lucky that I was at the right place at the right time.

LM: In the 90s, there was the Americans with Disabilities Act, the ADA. And that really supported deaf and hard-of-hearing people because it gave them things like closed captioning and interpreters at school. That made the US one of the most progressive places for deaf and hard-of-hearing people. But Kim says it's not perfect. There's still a long way to go before the act is completely accessible and inclusive. She still considers herself fortunate to have been raised in the United States, and now live in Germany. The World Health Organization says in many developing countries, deaf or hard-of-hearing children don't receive any schooling.

LM: So Kim has been touring the world with her art. And right now, she's set up at MIT, just outside of Boston. Besides drawings, Kim uses a lot of sound in her work. And if you're wondering how, even though Kim can't hear, she picks up on visual cues about sound: She uses other people as her guide. So, for example, when she's eating a bag of potato chips (sound of someone noisily eating potato chips) she says she can tell she's being noisy by the way people look at her. Or when a glass shatters (sound of glass shattering) and everybody's heads turn, she knows there's a problem.

Growing up, Kim said she'd always felt sound was a hearing person's thing. But now it's a big part of her artistic platform.

CK: If I hadn't used sound, if I still kept discussing those topics, but using a different medium, I don't think I would have gotten the attention I did.

LM: She didn't let me record her sound installation, but basically you hear a low-frequency xylophone, very basic sounds. No lyrics. As an artist, she expresses a lot of what she calls her "Deaf rage" through charcoal diagrams. Her series, "Off the Charts," is about her personal decisions as a Deaf person. She expresses them through pie charts.

CK: I always find that the best way to communicate with a wider audience who are not deaf is to use a format that people can easily understand. It's like mathematical angles. How much rage do I have? You can see it in the size of the angle.

LM: There were hundreds of people at the opening night, including college student Rebekah Brunson:

Rebekah Brunson: I really love what I've seen so far. My favorite one so far is “Shit Hearing People Say to Me." It's always important, I feel, to educate yourself about communities that you're not a part of.

LM: But some people were confused by the exhibit like student Josef Nardi.

Josef Nardi: It's very strange, to me, because it's just — I don't understand it.

LM: Henriette Huldisch is the curator of Kim's exhibit. She says the drawings are meant to be profound and funny.

Henriette Huldisch: But funny in a way that there's a certain amount of absurdity in expressing a very personal decision in a diagrammatic pie chart form. But I think also there's something that people can really learn about some of the decisions that deaf people make about how they deal with language and to what extent they want to engage with spoken language.

LM: Today, Kim's artwork has been displayed in museums in Asia, North America and Europe.

She sees herself as an archivist.

CK: Often hearing people are the ones who are looking and creating history. And we are just kind of pushed to the side. I've made work, I've put it in history... and as it continues to grow, hopefully so does the awareness.