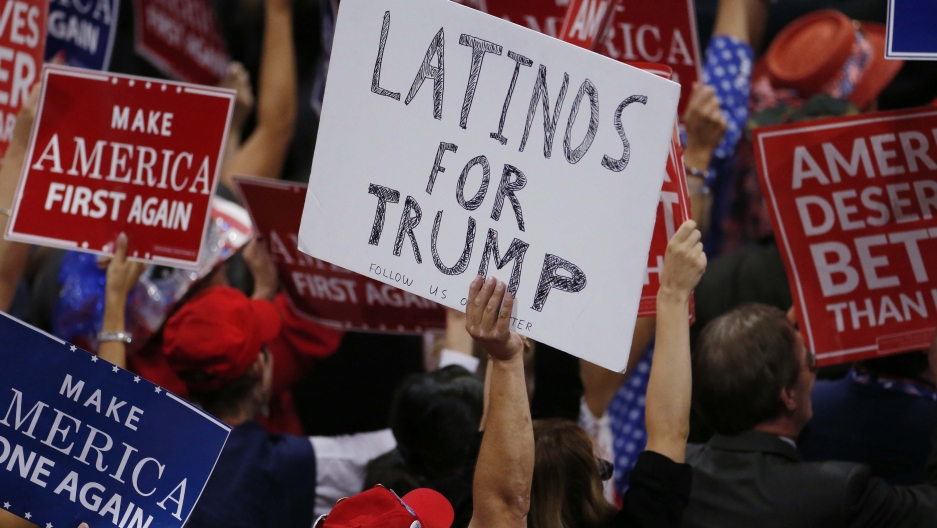 A person holds a sign reading 'Latinos for Trump' on the third day of the Republican National Convention in Cleveland, Ohio, U.S. July 20, 2016.

There are two major assumptions when it comes to the Latino vote in the US: First, that all Latinos vote Democratic, and second, that immigration is a dealbreaker for all Latino voters.

But that's not always true, The World's Daisy Contreras explained to host Marco Werman. In the 2018 midterm elections, about 70% of Latino voters voted for a Democratic candidate, while about 30% voted Republican. But over the years, the percentage of Latinos who have voted for the Republican party has stayed pretty consistent — even as US President Donald Trump has made immigrants and Latinos a scapegoat for many of the nation's problems.

"While Latinos do have ties to Latin American countries like Venezuela, Mexico, El Salvador, they have unique circumstances that brought them here to the United States," Contreras said. "Things like how much money a family has, for example, or how many generations a family has been in the US could help shape those perspectives."

That's why immigration may be just one campaign issue many Latinos care about — but not the priority. Many Latino Republicans, for example, may care more about the economy, jobs, healthcare and border security when it comes to casting their votes.

"It's clear that a lot of the policies that [Trump] has been advocating for, specifically like school choice and lowering taxes and increasing jobs, have really resonated with the Hispanic community," said Jesus Solorio Jr. with Illinois' Republican National Hispanic Assembly.  "And I think that we're going to see a bump in those numbers come November."