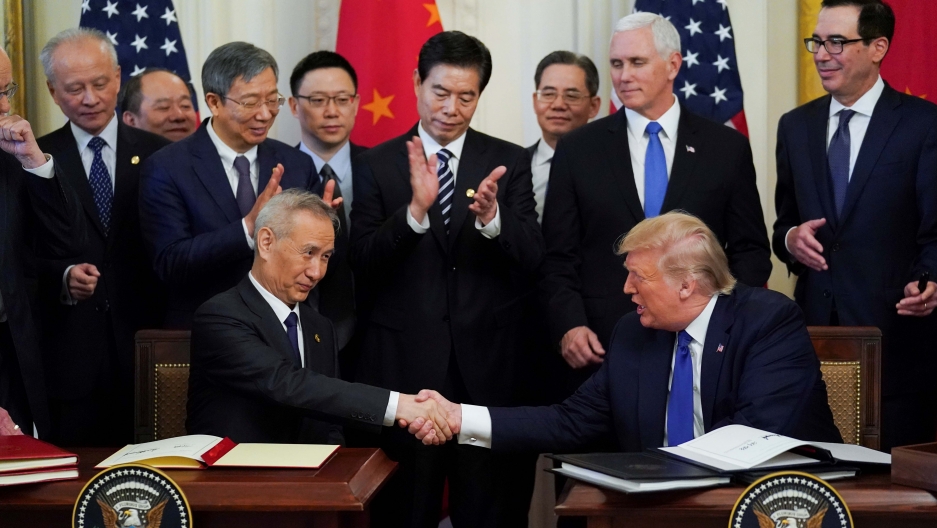 Chinese Vice Premier Liu He and US President Donald Trump shake hands after signing phase one of the US-China trade agreement during a ceremony in the East Room of the White House in Washington, DC, on Jan. 15, 2020.

China and the US have called for a timeout in the trade war. US President Donald Trump signed the deal at a White House ceremony today in which the Trump administration agreed to ease some tariffs on imports from China.

China, for its part, has agreed to provide greater protection for American technology in China. It's also committed to buying more US energy and farm exports.

Illinois is the top soybean producer in the US. In a press release, the Illinois Farm Bureau called today's deal "historic," also saying it was looking forward to more specific details on the deal and hoping to win back lost agricultural exports.

Officials with the US Chamber of Commerce said the agreement is a step in the right direction, but that there's a lot of work left to do. Many economists feel the same — and say that it fails to address some of the issues that sparked the trade war in the first place.

Michael Klein is at the Fletcher School at Tufts University. He's also the executive editor of Econofact, a website where economists unpack complex topics. He spoke to The World's host Marco Werman on what the deal means.

"It's been called more positive by the head of the US Chamber of Commerce. But an expert at the Council on Foreign Relations said that it's a small achievement at a very high price," Klein said.

Marco Werman: The Trump administration did manage to wring some concessions out of China. One example: China's now promising to punish Chinese firms that steal corporate trade secrets. But just on that, what guarantees are there that they'll actually follow through and live up to their end of the bargain?

Michael Klein: We really don't know. That's a very good question. We really don't know the answer to that. You know, these kinds of things have been going on for a long time. And it's a real concern that China forces companies to have joint ventures and then they take their technology. In the past, the US trade representative 2018 under the Trump administration said that China has violated the agreements. So we don't have a way to guarantee that it's going to happen this time. And apparently, there may be a lot of loopholes. So the Chinese promises have been called broad and vague.

Will we — the public — ever know what those loopholes are?

After they're used, I suppose? Yeah.

China's also agreed in principle to buy $200 billion more of American goods over the next two years. First of all, is that possible? Can they just say, all right, two years of stuff on layaway, we guarantee you will pay? And second, how much does $200 billion actually matter?

Well, the irony here is that the United States wants China to be more market-oriented, but then they're saying, "And yet we want you to guarantee the purchases of these goods." There is a real question of whether or not they could even absorb that many goods. And it really, at best, could provide temporary help to United States manufacturing and agriculture. It's notable that the Trump administration has made essentially big welfare payments to agriculture because of the damage that the trade war has done.

Well, it's interesting. Amy Klobuchar, last night at the debate, spoke about people in Iowa who'd lost their jobs because of Trump's tariffs. She was talking about going to a food processing plant in Iowa. And basically, there was only one person still working there. So, Senator Klobuchar [mentioned] farmers getting subsidies and processing plant workers losing their jobs. Is she citing an isolated example or she illustrating a wider trend with what Trump has done?

Economists don't agree on a lot, but there is universal agreement, it seems, that tariffs are bad economics. What about the politics here? Did the president use tariffs, do you think, to basically get China to the table and stay at the table until an agreement was reached?

There's probably some element of truth in that. That's right. But also, people have ascribed the uncertainty associated with the way in which tariffs were imposed or taken off as dampening economic activity. It's effectively a tax on people. And, you know, you should think of a tariff as a tax because that's precisely what it is. And the question is, who bears it? And it turns out American businesses and consumers bear it.