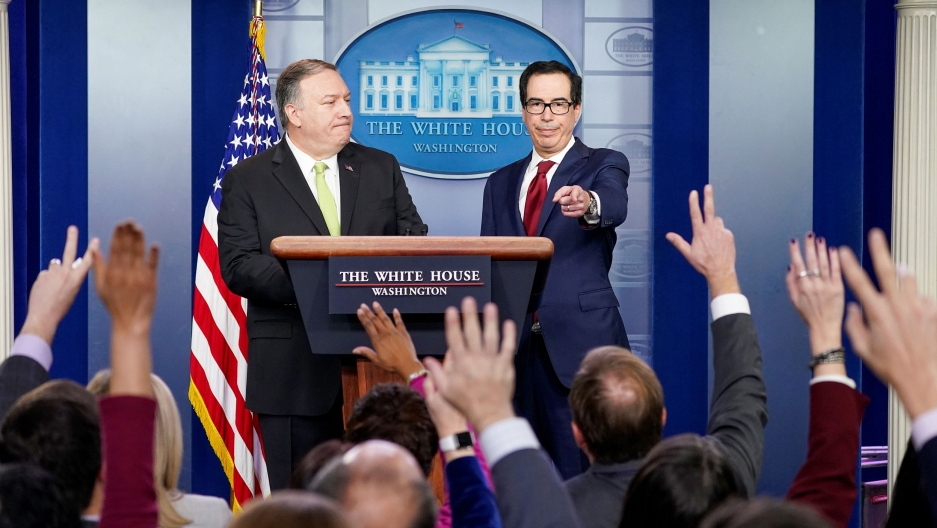 US Secretary of State Mike Pompeo and Treasury Secretary Steven Mnuchin take questions as they announce new sanctions on Iran in the Brady Press Briefing Room of the White House in Washington, DC, on Jan. 10, 2020.

Some commentators called the White House speech a show of strength. Flanking US President Donald Trump were senior officials in his administration, including Vice President Mike Pence and top military brass in their full-dress uniforms. Viewers anxiously awaited the possibility of the United States taking military action against Iran, after Iran fired ballistic missiles at two Iraqi bases housing US and Iraqi troops to avenge the death of Quds Force Commander Qasem Soleimani.

Instead, there was a relatively measured, scripted tone. “The fact that we have this great military and equipment, however, does not mean we have to use it,” said Trump on Jan. 8. “We do not want to use it. American strength, both military and economic, is the best deterrent.”

In Iran, there was a sigh of relief from many ordinary Iranians who had experienced a bloody eight-year war with Iraq during the 1980s. A war between Iran and the United States would not only be cataclysmic; it would be endless. Congressman Seth Moulton (D-MA), an Iraq war vet, told CNN that a war with Iran would mean that his 14-month-old daughter would have to fight it.

Since the Jan. 7 attacks on Iraqi bases, Iranians had spent much of their time worriedly flipping between state media and satellite channels, and scrolling through social media, awaiting the fallout from the United States. A meme circulated among some Iranian families on WhatsApp groups depicting a snow-covered cabin in the mountainside. It read: “I wish I was in this cabin, sipping coffee by the fireplace and didn’t know where the Middle East is.”

Those with dual nationalities quickly considered the idea of fleeing the country before the threat of military escalation. But that is a privilege few Iranians have.

Others doubted the possibility of war altogether. Amir, an English teacher in Esfahan, who asked his real name not be used for fear of repercussions, explained that he didn’t anticipate a war, but said Trump “is unpredictable and a man of his word.”

“He won’t do it,” said Fardad, an Iranian-American graphic designer living in Tehran, who also asked his real name not be used. He didn’t take Trump’s threats seriously — even when the US president threatened on Twitter to target 52 Iranian sites, including cultural sites, which would constitute a war crime.

Hours after the attacks on Jan. 7, Iranian Foreign Minister Mohammad Javad Zarif tweeted, “Iran took & concluded proportionate measures in self-defense … We do not seek escalation or war, but will defend ourselves against any aggression.”

Iran openly offered a golden bridge of de-escalation by not killing any US troops or causing serious damage, and the Trump administration willingly took it.

Despite the de-escalation by both sides, there doesn’t seem to be a real way forward. In his speech at the White House, Trump called on the remaining signatories of the Iran nuclear agreement — China, Britain, France, Germany and Russia — to withdrawal to join his so-called “maximum pressure” campaign and force Tehran to make a new deal.

Since the US withdrawal in May 2018 — despite Iran not violating the nuclear agreement — those very countries have tried to salvage what’s left of the Joint Comprehensive Plan of Action (JCPOA). This has proved to be a bigger conundrum for European allies of the United States, who see themselves caught in the middle of trying to appease an unpredictable US president in order to keep the door for trade open, while not unravelling a deal that could close the door on any future nuclear negotiations.

Europe, like much of the international community, was completely caught off guard by the assassination of Maj. Gen. Soleimani. The Trump administration didn’t bother to consult the leaders of Britain, France and Germany.

Europe’s subtle disapproval of the assassination of Soleimani didn’t go unnoticed by the Trump administration, however. Secretary of State Mike Pompeo told Fox News, “Frankly, the Europeans haven’t been as helpful as I wished that they could be. The Brits, the French, the Germans all need to understand that what we did, what the Americans did, saved lives in Europe as well.”

Tehran hasn’t been content with Europe’s handling of the situation, either. On Jan. 5, Iran announced it would no longer abide by any restrictions in the deal, its fourth step in reducing commitments to the JCPOA. Iran waited patiently for a year for European signatories to come up with a special purpose vehicle intended to facilitate trade with Iran, but has not yet become operational. In May 2019, Tehran began reducing its commitments every 60 days, which is in line with Article 26 of the JCPOA: “A re-introduction or re-imposition of the sanctions” are grounds for Iran “to cease performing its commitments under this JCPOA in whole or in part.” Iran has repeatedly claimed that once it enjoys the benefits of the deal — which can ostensibly include the US returning to the JCPOA and removing sanctions — Tehran will return to its commitments.

Some have described the nuclear deal as dead, and it’s starting to look that way — with neither side budging for now. The Trump administration has altered its pre-conditions on how to deal with Iran on several occasions, while ongoing meetings with North Korea on its nuclear program don’t inspire Tehran, given Trump’s lackluster commitment to actually dealing with tough problems beyond photo ops.

In May 2018, Sec. Pompeo called on the Iranian government to follow its 12 demands and change its “malign behavior” before a deal could be made, only for Trump to renege months later that he was willing to talk to Tehran with “no pre-conditions.” This was followed by Trump’s 2019 push for French President Emmanuel Macron and Japanese Prime Minister Shinzo Abe to mediate — which has now been erased by the sudden pressure on Europe and remaining signatories to exit the deal.

'All sticks no carrots'

The Trump administration has heavily relied on sanctions, having imposed punitive measures on practically all aspects of the Iranian government and infrastructure. Just when one assumes there is nothing left to sanction, on Jan. 10, the Trump administration managed to impose additional sanctions on eight Iranian officials and any individual “owning, operating, trading with, or assisting sectors of the Iranian economy including construction, manufacturing, textiles, and mining.” While this was a purely political move, the “all-sticks-no-carrots-policy” of sanctions has left no room to squeeze Iran further as Tehran has only lashed out, rather than been incentivized to the negotiating table.

Trump is unpredictable and his strategy is incoherent. Trump is more likely to lead the United States into another disastrous war rather than solve the problems that plague the region. He also could very well pick up the phone and call the leadership in Tehran tomorrow. But that’s not the kind of gamble any government should take, or even hope for or accept. For Iran’s part, the escalation in recent months has carved a path for hardliners to make a comeback in the February parliamentary elections. With tensions at an all-time high, there’s no clear path forward in the absence of measured, reliable and consistent American leadership to deal with a newly emboldened Tehran.

Holly Dagres is editor of the Atlantic Council’s IranSource blog, and a nonresident fellow with the Middle East Security Initiative in the Scowcroft Center for Strategy and Security. She also curates The Iranist newsletter. Follow her on Twitter: @hdagres.