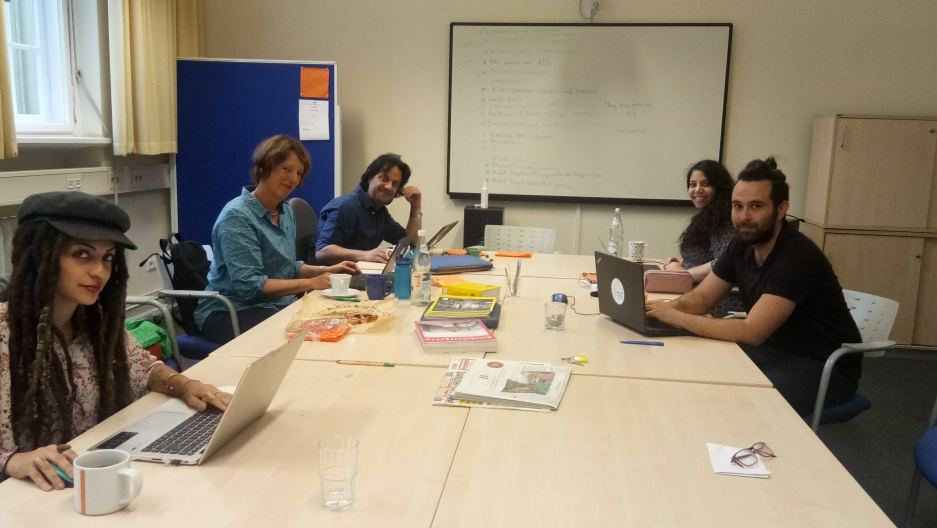 Sitting in a Berlin newsroom, exiled Iranian journalist Aora Helmzadeh said she appreciates being able to write her in mother tongue again as a staff writer with Amal, Berlin! a new online news outlet for Arabic, Farsi and Dari audiences.

“Amal gives me space to be courageous and a safe platform to write,” said Helmzadeh, who covers social and environmental issues with a team of nine other exiled journalists. Helmzadeh, 30, experienced censorship of her work in Tehran, Iran, and arrived in Berlin, Germany, in 2015. She joined Amal's Farsi and Dari department in early 2019.

When journalists flee their home countries, they often lose their two most important tools: the ability to report in their native language and their professional networks. In Germany, their lack of German language skills and the paucity of work for journalists reporting in foreign languages forces them — like other refugees — to start their careers over.

Two journalist sisters from Germany, Cornelia Gerlach and Julia Gerlach, wanted to change this with Amal, which means "hope" in Arabic. Many of the journalists on staff arrived in Germany seeking asylum from countries such as Syria, Afghanistan, Iran and Egypt. In 2019, the sisters opened a second newsroom, Amal, Hamburg!, in Hamburg, with four new staff members.

Amal's reporting focuses on political, economic and cultural news from migrant communities in Berlin and Hamburg, as well as broader German society, serving as a bridge between these cities and newcomers.

“In 2015, when this whole big group of refugees arrived in Germany, everyone was trying to do something for them. ... As we’re both journalists, we decided to work for the professional development of exiled journalists."

“In 2015, when this whole big group of refugees arrived in Germany, everyone was trying to do something for them,” Cornelia Gerlach said. “As we’re both journalists, we decided to work for the professional development of exiled journalists."

In 2016, Cornelia Gerlach posted a call for applications on Facebook and received the first one within minutes. In a week, her inbox was full of about 100 of them. “We selected 10 journalists who fit our criteria of being based in Berlin, and having worked as journalists in their home country,” she said. Then they set up a workshop for selected journalists to train them on Germany’s legal framework, culture and integration. “The idea of Amal developed step by step in the [following] few months,” Cornelia Gerlach said.

Amal magazine benefits from the team’s ability to connect with refugee communities. “Our journalists come with a lot of expertise — they bring their background with them and are able to connect with their [own] community,” Cornelia Gerlach said.

There are currently 1.4 million refugees in Germany, including 267,000 Afghans who speak Dari and 237,000 Iranians who speak Farsi. Arabic has grown to one of the most common languages spoken among the country's migrant population: The German Federal Statistical Office estimates that 7% of households with migrant backgrounds speak Arabic.

Amal journalists note several differences between working in their home countries and Germany, especially with writing styles and reportage approaches. “In Afghanistan, say the most interesting part of the story is usually kept for the end, while in Germany, we declare it in the headline or the lede,” Cornelia Gerlach said.

“It is easier for me to get an interview with a politician in Germany as opposed to Egypt. ... Getting the truth out involved a lot of effort in my country.”

Amal journalists also notice the relative ease of accessing information and contacting authorities in Germany compared to their home countries. “It is easier for me to get an interview with a politician in Germany as opposed to Egypt,” said Asmaa Yousuf, 36, who worked as a journalist in Egypt before moving from Alexandria to Berlin in 2015. “Getting the truth out involved a lot of effort in my country.”

“I had to be careful about choosing my ideas, and think several times whether the government would like it and if the religious leaders wouldn’t be bothered. ... At Amal, I can be faithful to my own views."

Helmzadeh said she was constantly censored in Tehran when she worked for the daily newspaper there. “I had to be careful about choosing my ideas and think several times whether the government would like it and if the religious leaders wouldn’t be bothered,” she said. “At Amal, I can be faithful to my own views,” she said.

“I cannot think of returning to Syria under the Assad rule; I will be persecuted, or even worse, killed." 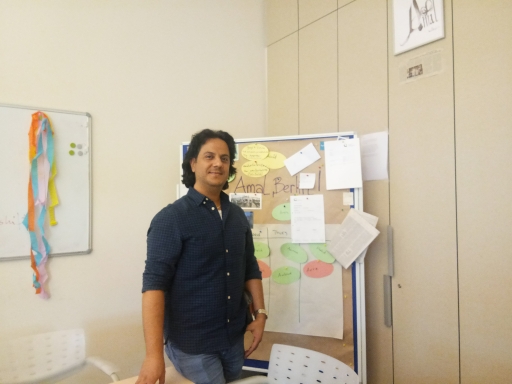 Syrian journalist Abdolrahman Omaren reports for Amal, Berlin! in Arabic. He used to work in Syria as a broadcast journalist and reported on the Assad regime in Dubai, before he arrived in Berlin, Germany.

Syrian journalist Abdolrahman Omaren, 40, has headed the Arabic team since Amal’s inception. He used to work in Syria as a broadcast journalist for 10 years. In 2010, he went to Dubai, and reported on the Bashar al-Assad regime. “I cannot think of returning to Syria under the Assad rule; I will be persecuted, or even worse, killed,” Omaren said.

“Amal is different in that it tries to talk to the refugees in their own language and shows their side of the story, which other media publications usually don’t,” Helmzadeh said.

That’s another gap the Gerlach sisters have tried to close with Amal in Germany.

Today, there are just a handful of multicultural media in Germany in languages such as Turkish, Arabic and Farsi. Most do not publish on a daily basis — unlike Amal, which publishes five local news pieces per day.

“Many refugees find news from social media, which is not always reliable,” Omaren said.

"We think that it’s important to help newcomers know what’s going on in their neighborhood right from the start. ... It takes time to pick up a new language. How would they access information until then?”

Critics of minority-led media believe that “providing migrants news in their language would prevent them from learning German,” Cornelia Gerlach said. “However, we think that it’s important to help newcomers know what’s going on in their neighborhood right from the start,” she said. “It takes time to pick up a new language. How would they access information until then?”

Staff writers produce 10 to 12 features per week, many of them stories that mainstream media glosses over, such as relationships between old and new refugee communities, the trauma of deportation and the process for asylum-seekers in Germany.

Amal speaks to the importance of positive representations of migrants' cultures in the media. Several studies show that seeing one's own culture reflected in the media helps develop strong self-esteem and a sense of belonging, while negative representation leads to feelings of rejection and hostility. Multilingual, inclusive media “strives to celebrate minority successes, accomplishments, and aspirations," according to at least one study done on multicultural media in Canada.

It's the same reason why New York’s German-language newspaper, The New Yorker Staats-Zeitung, was founded in 1834 for immigrants.

“It is not easy to live as a refugee when there are reports against refugee crimes, many of them false,” Yousuf said. Having learned German and an active member of German media, she understands the larger context, unlike a lot of newcomers.

“To be informed is a precondition for involvement in the democratic process,” Cornelia Gerlach said. Amal has made it easier for refugees to connect with their German neighbors and interact with them on a range of topics, from subway construction to local football team successes, she said.

“Access to information and news is a human right,” Cornelia Gerlach said. “It’s an important step for inclusion.”

The reporting for this story was supported by a fellowship from the Robert Bosch Foundation.