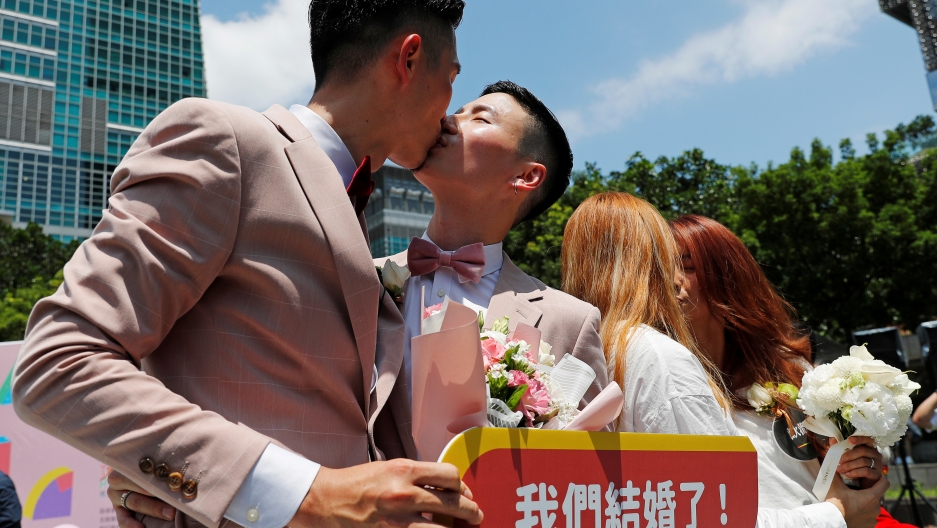 Gay and lesbian newlyweds kiss at a pro same-sex marriage party after registering their marriages in Taipei, Taiwan May 24, 2019.

The 2010s decade brought monumental success for LGBTQ rights worldwide, from gay marriage being legalized in many countries and jurisdictions, to the more widespread adoption of protections against discrimination.

Despite these successes, worry among LGBTQ advocates has grown over the world leaders' increased efforts to suppress their rights.

Lucas Ramón Mendos, a senior research officer at the International Lesbian, Gay, Bisexual, Trans and Intersex Association, or ILGA World, spoke with The World's host Marco Werman about these successes and increasing anxities going into the 2020s.

Marco Werman: Is the global LGBTQ community closer to equality now than it was at the beginning of the decade?

Lucas Ramón Mendos: Well, to give you a direct answer, yes. Under that headline, of course, then there's a lot of nuance. And we have to clarify who is "we," because not all of us benefit from that progress equally.

In the past 10 years, if we just look at the US, there's been the legalization of same-sex marriage, changes in social attitudes, and the government repealing the military policy "don't ask, don't tell." Compare those gains to other countries. Where have you seen more progress toward LGBTQ equality?

It is true that most of the progress is in the West. I would say the Americas, Europe and a few countries as well in Asia and in southern Africa, are making progress. In 2010, looking back ten years, only seven countries actually recognized same-sex marriage at the national level. But now it's 28 countries, and we've seen that progress take place also with regard to protection against discrimination, especially in employment. For instance, looking back to the situation in 2010, 49 countries protected us against discrimination in employment. Now it's 77 countries.

So, before we leave the US, we should say that despite the progress in the last 10 years in this country, it's been a mixed bag for LGBTQ rights. In 2018, President Trump reinstated a ban on transgender people serving in the military. In a majority of states, an LGBTQ person can get married on a Sunday and be fired by their employer on a Monday. So how do things in the US start to kind of move forward again?

I think the situation in the US is also a reflection of the polarizing tensions that we see worldwide. A few years ago, we were more enthusiastic about the direction things were going. But we see that our detractors are becoming more organized, and they are reaching key positions of power. The fact that we were able to achieve progress in the first part of a decade now has empowered people to better organize and strategize against us, unfortunately. We're seeing that their strategies are becoming unfortunately more successful.

Are there any countries you were surprised to see expand LGBTQ rights over the past decade?

Certainly that used to be the case with southern Africa that, you know, South Africa was the leading country in the whole continent. But now we see other countries making progress as well. Mozambique and Botswana also protect people from discrimination in employment. So South Africa is no longer a lone wolf in Africa.

Yet if you look at South Africa, a country with protections for LGBTQ rights are in reality, the violence still continues against the community. Why do you think that happens?

On the extreme end of the spectrum, countries that rank the lowest in terms of LGBTQ safety and rights are actually passing and enforcing laws that further restrict the rights of the LGBTQ community. Which countries are those, and what does life look like for LGBTQ people there?

Exactly. So there are still six countries in which the death penalty is effectively enforced, and those countries are Sudan, Somalia, a few provinces in Nigeria, Yemen, Iran and Saudi Arabia. The situation on the ground is extremely difficult. The people that were able to speak about the lived reality of LGBTQ people and those countries have actually fled the country before they were able to speak out. We wonder about the thousands and millions of people that are still living under those situations and can not leave the country. It is very difficult for people on the ground to organize, let alone register an organization working on this issues. So the prospect of change in those six countries and in other countries that have similar laws is really difficult.

You did speak earlier about the pendulum kind of swinging back to a darker time for LGBTQ rights. How concerned are you going into the next decade?

Well, actually, we have issued this report with mixed feelings because we thought that criminalizing countries would never be added to the list. But we had to add Chad in 2017, and we had to add Gabon this year to that list. However, we are confident that the trend will still be decriminalization.

The interview has been edited and condensed for clarity.