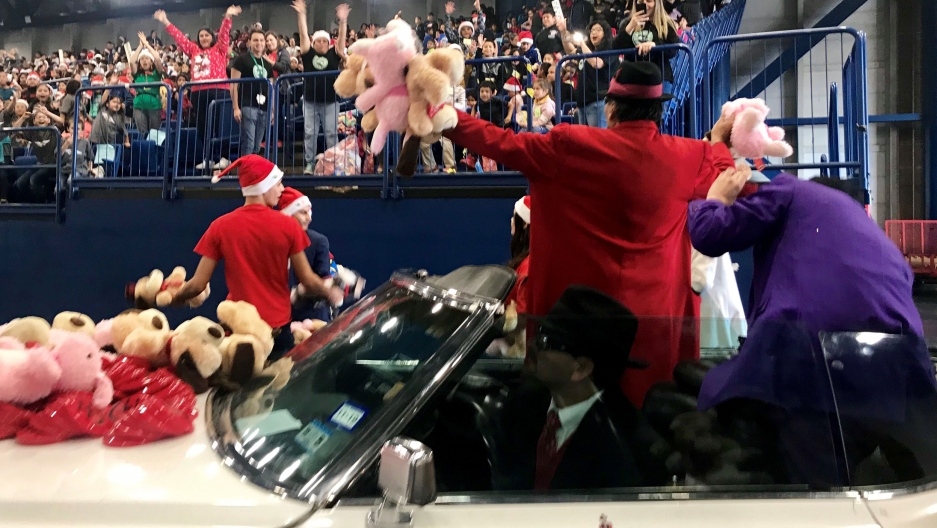 Generations of Houstonians know — when you hear the rumble of his low-rider — Pancho Claus must be close by.

He makes appearances in Houston throughout the month of December, showing up to holiday events in a red zoot suit and fedora and driving around in his 1972 Cadillac Eldorado.

Richard Reyes has embodied Pancho Claus for nearly 40 years as part of his work with at-risk youth. It all started in 1981, when Reyes was asked to write a Christmas play about Pancho Claus. He was inspired by the zoot suit comeback happening in Houston at the time. 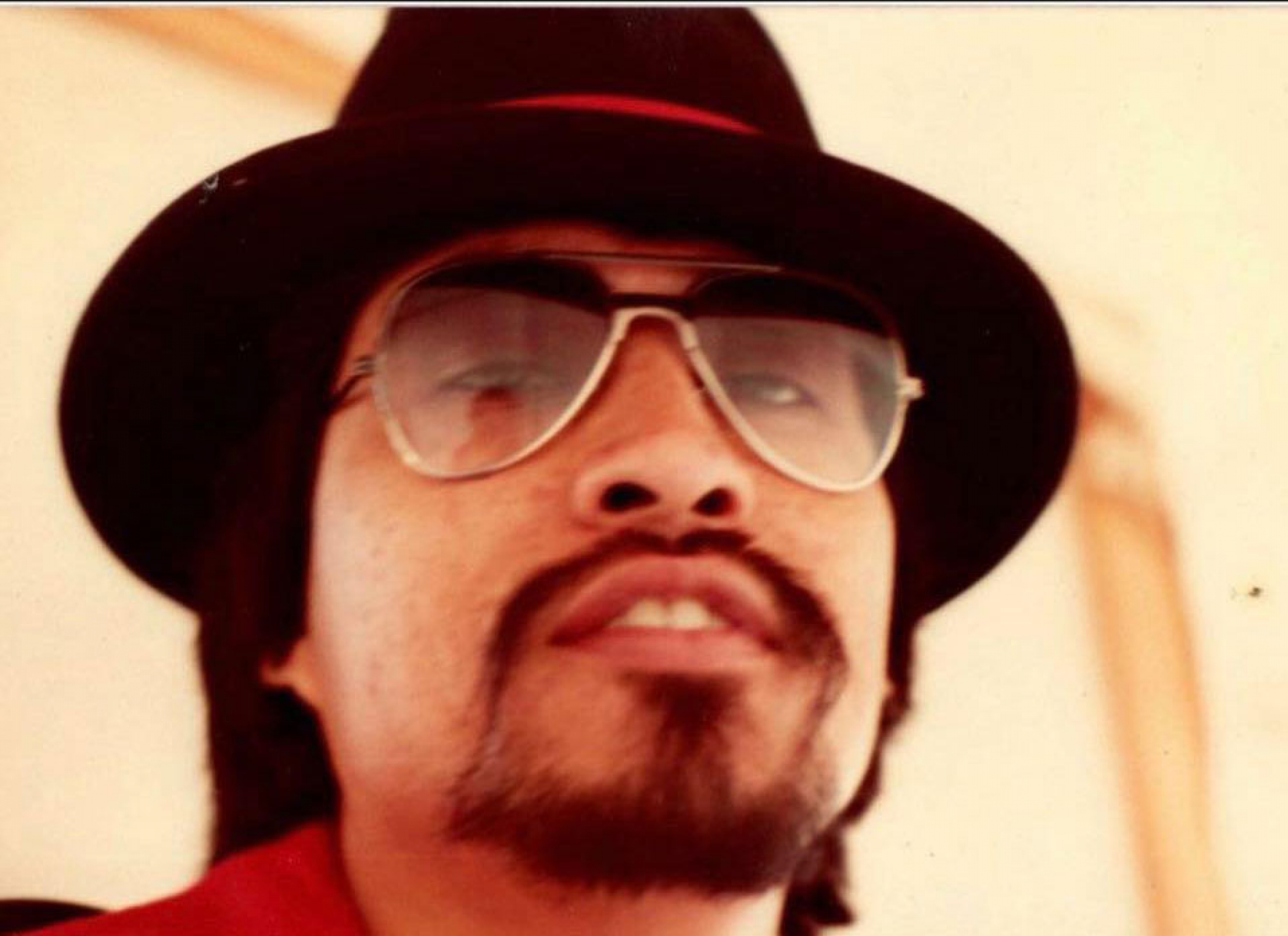 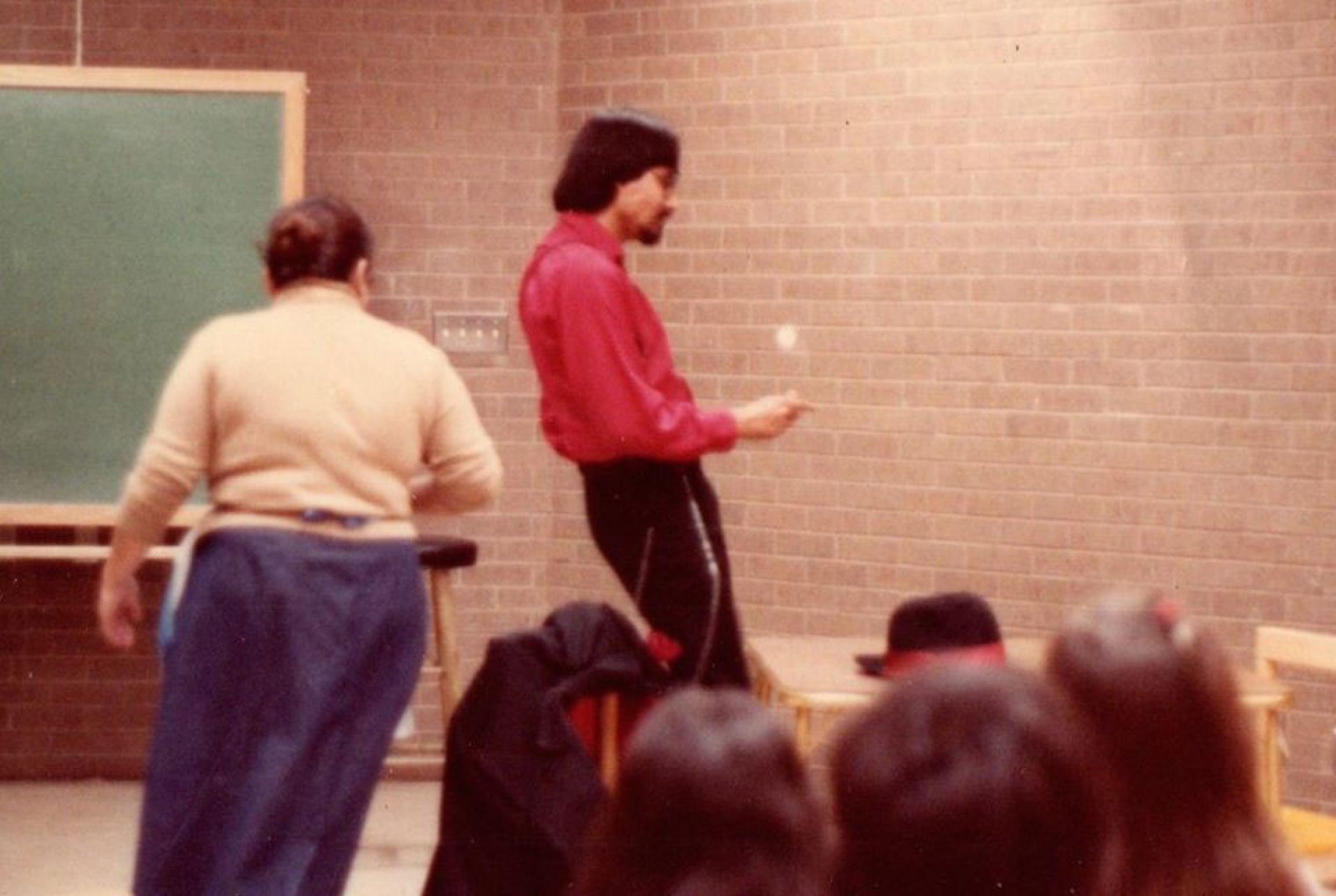 Pancho Claus started with a play written by Richard Reyes in 1981.

“I patterned the whole story on the ‘Night Before Christmas,’ but Chicano style. There’s no chimneys in the Second Ward here, so he busts in through the bathroom window,” said Reyes.

Little did he know, a Houston legend was born. 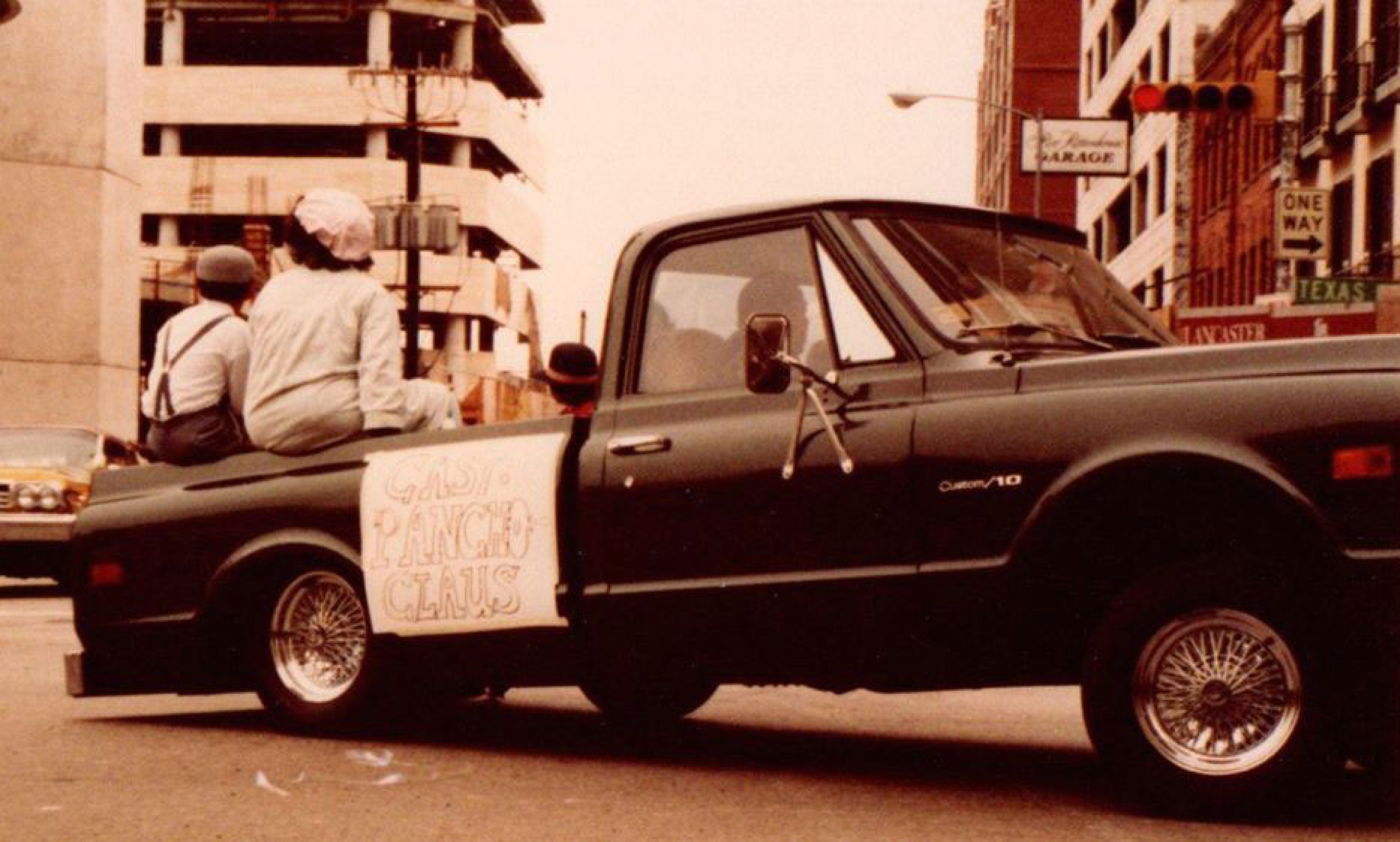 Over the years, Pancho Claus has added event after event to his Christmas calendar. He started a Pancho Claus band, he visited different schools in Southeast Houston where he passed out toys and he coordinated gift collections and giveaways for children in need.

And he does something extra special on Christmas Day.

“We’re going to go out with low riders and cruise around the neighborhoods,” said Reyes. “And we go out to the poorest neighbors that we can find and just randomly give out gifts and come through making a lot of noise, we have police escorts.”

Over the decades he’s reached tens of thousands of kids. Roland P. Harris Elementary counselor Crystal Ramirez is one of them.

She still remembers the day 26 years ago, when Pancho Claus came to her school.

“He came in and he was the Santa Claus for that year. The cafeteria was full of students. He came in, he sang, he danced, we got teddy bears,” she said. “And for us as students, it meant the world because we felt like Santa was in the building, because he is the Santa.” 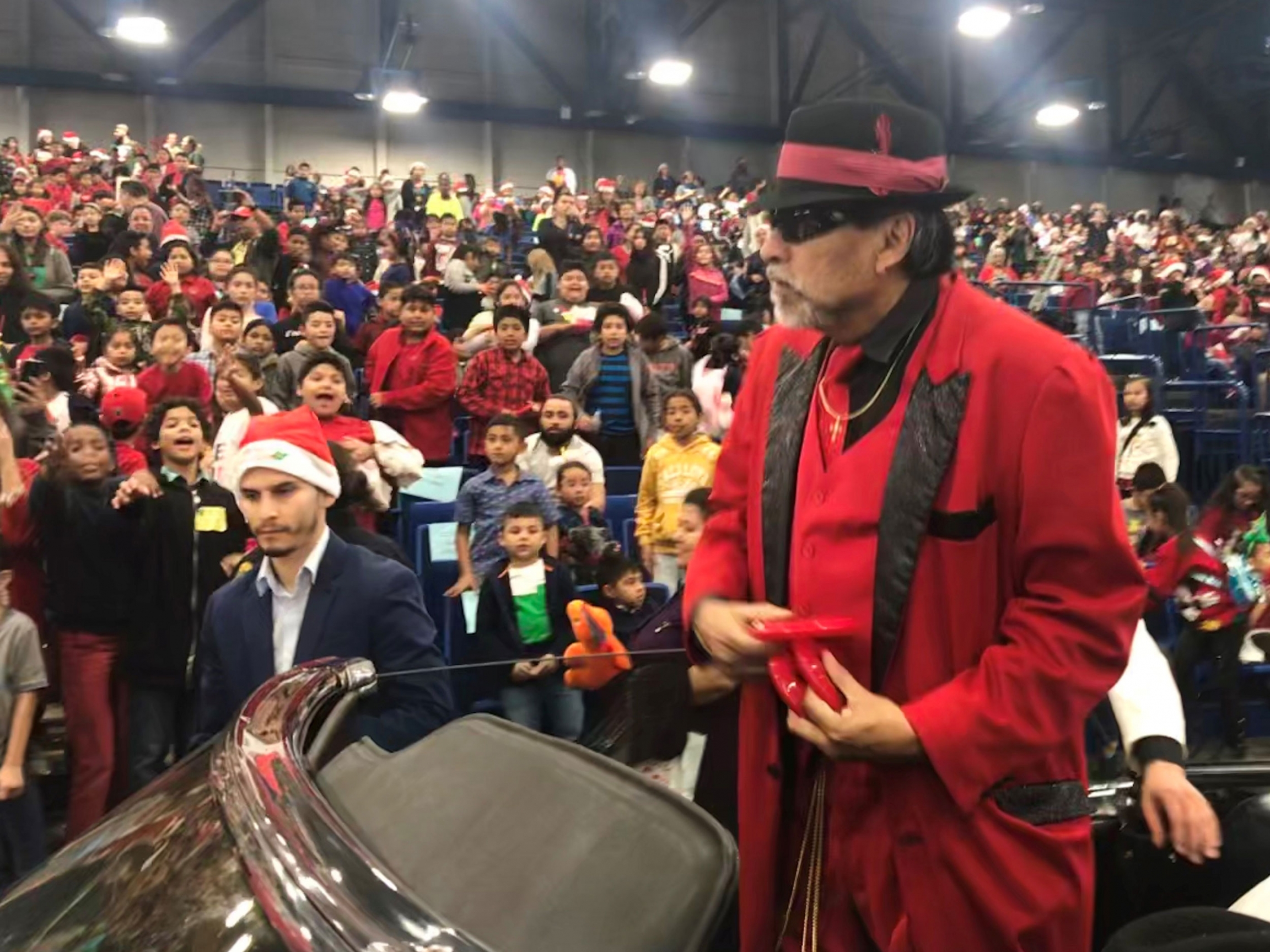 Pancho Claus has been performing at Navidad en el Barrio for more than 30 years.

Pancho Claus meant a lot to her has a kid, and still does today, she said.

“In the Hispanic community, in the community I grew up in right there in Southeast Houston, he was it. When you saw Pancho Claus coming, everybody was excited and we would run out,” said Ramirez. “He brings that cultural aspect, because he does represent our community and he does give back to so many community causes within the neighborhood.”

It’s emotional to share Pancho Claus with her own students now, she said. She joins them at the annual Navidad en el Barrio event, which gives thousands of toys to some of Houston’s low-income students at the George R. Brown Convention Center.

The event is a long-standing tradition for Pancho Claus.

And Reyes continues to perform there, which is no small feat: in recent years, Reyes has had not one, but three heart attacks. It’s got him thinking about who will carry on his tradition.

The future of Pancho Claus 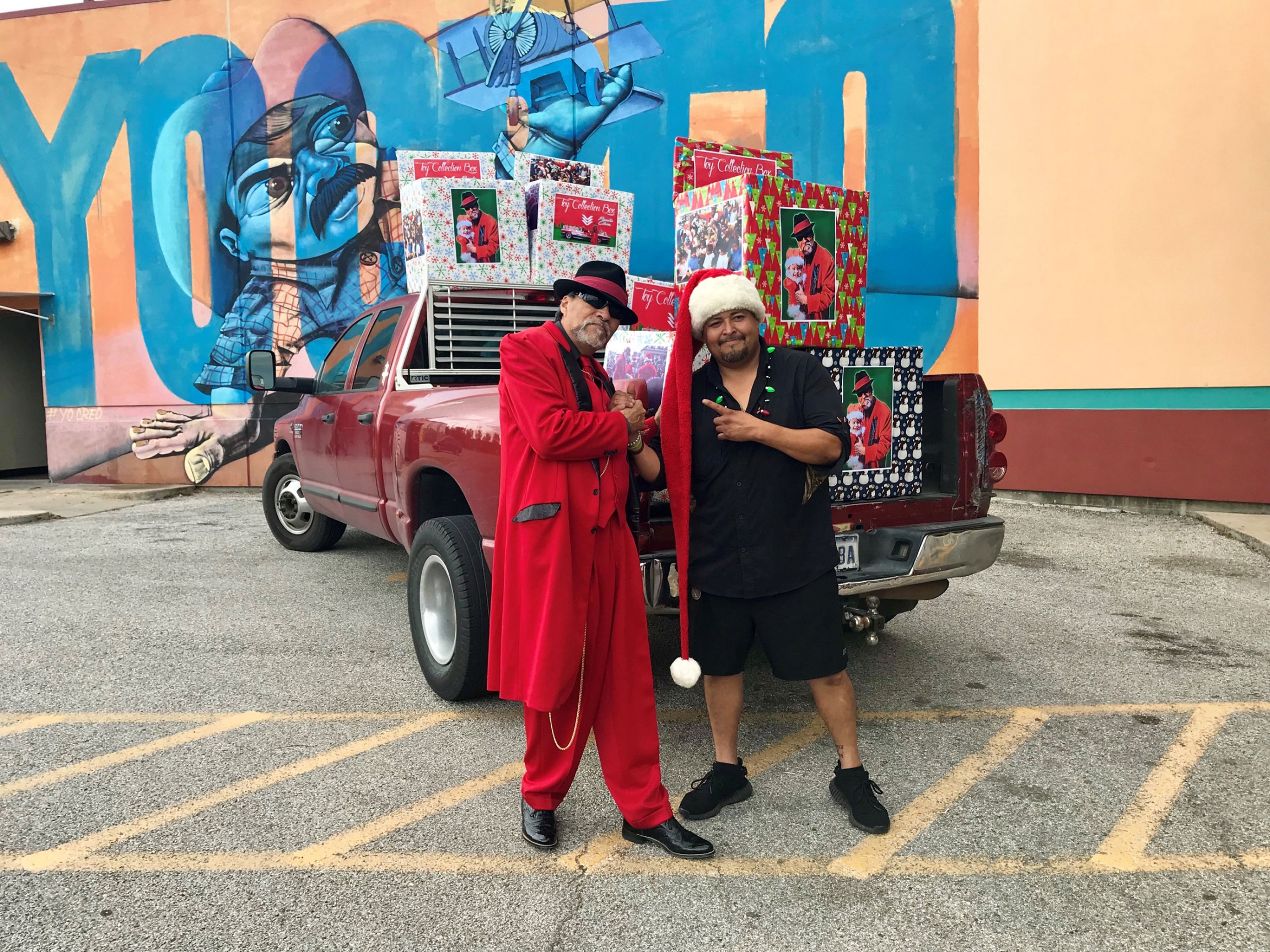 Richard Reyes poses with a volunteer who is dropping off toy collection boxes to different locations around town.

Reyes has been a father to Rene Hernandez since he was a kid working with low-rider bikes.

Now, Hernandez works with Reyes at Talento Bilingue of Houston and performs in the Pancho Claus band.

Hernandez said he remembers a performance after Reyes’ first heart attack when he realized he is the future of Pancho Claus.

“During numbers he would look at me and get off the mic and then I’d jump in and he’d walk off stage and I’d be doing his thing,” he said. “And then after the shows he’d like to tell the audience, ‘if ya’ll are worrying about the future of Pancho Claus, you just got a glimpse of it’.” 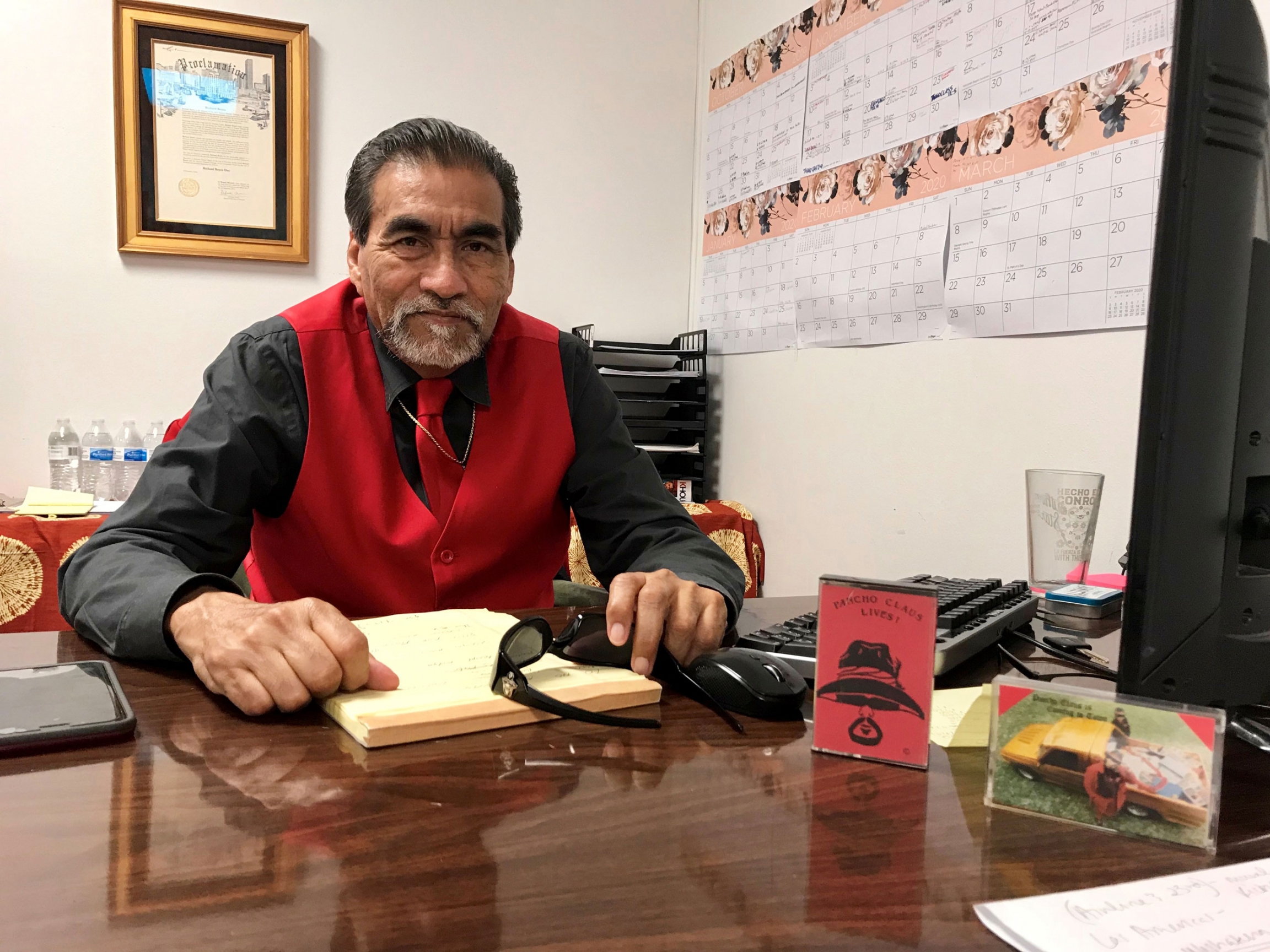 Hernandez said he imagines updating the Pancho Claus look a bit — tighter pants, a more modern fedora. But, he said, no matter what, the spirit of Pancho Claus will live on.

“That’s what Pancho Claus has always been all about. He always says Pancho Claus is not him, it’s the people that put the events together, it’s the moms and dads that bring the kids to events, it’s everyone, it’s a community effort,” said Hernandez.

The original version of this story was published by Houston Public Media.