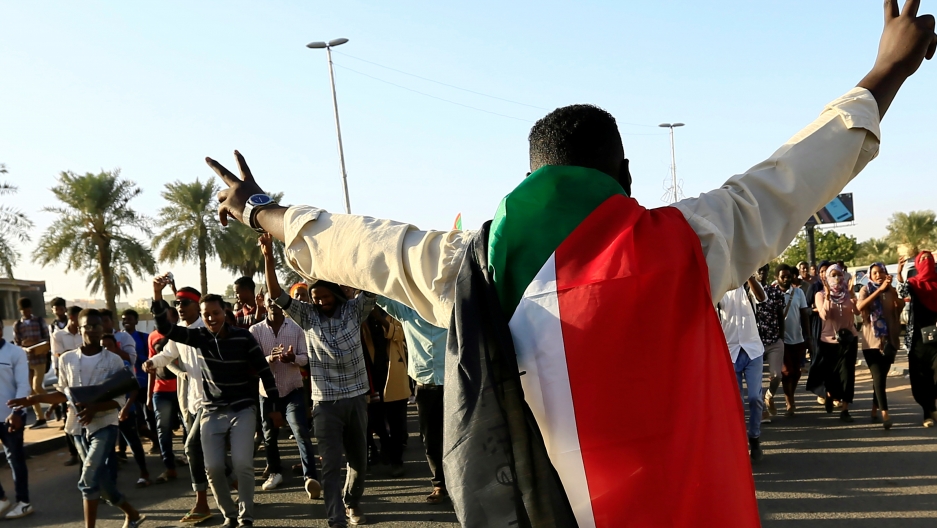 A Sudanese man wears a national flag and flashes the victory sign as people gather during the first anniversary of the start of the uprising that toppled long-time ruler Omar al-Bashir, in Khartoum, Sudan, Dec. 19, 2019.

When thousands of people took to the streets of Khartoum on Thursday, Dec. 19, it felt like déjà vu.

Massive nationwide protests swept Sudan a year ago as anger over bread prices and a crippling economy grew into calls for longtime leader Omar al-Bashir to step down. Since April, mass demonstrations have become a common scene in Khartoum, the capital, when hundreds of thousands of protesters first staged a sit-in outside the country’s army headquarters with their demands.

But Thursday’s demonstration was not a protest.

The demonstration was a celebration of how one year of popular protests eventually toppled ex-President Omar Al Bashir and led to one of the biggest political transformations in the region. A year later, however, the nation still faces a major economic crisis and must navigate the negative impact of years of sanctions imposed by the United States. Bashir had been in power for 30 years.

Related: 'We are willing to die' for democracy, Sudan protester says

Thursday, videos circulated on social media that show people arriving on trains to Khartoum from the small city of Atbara — where the protests began Dec. 19, 2018. 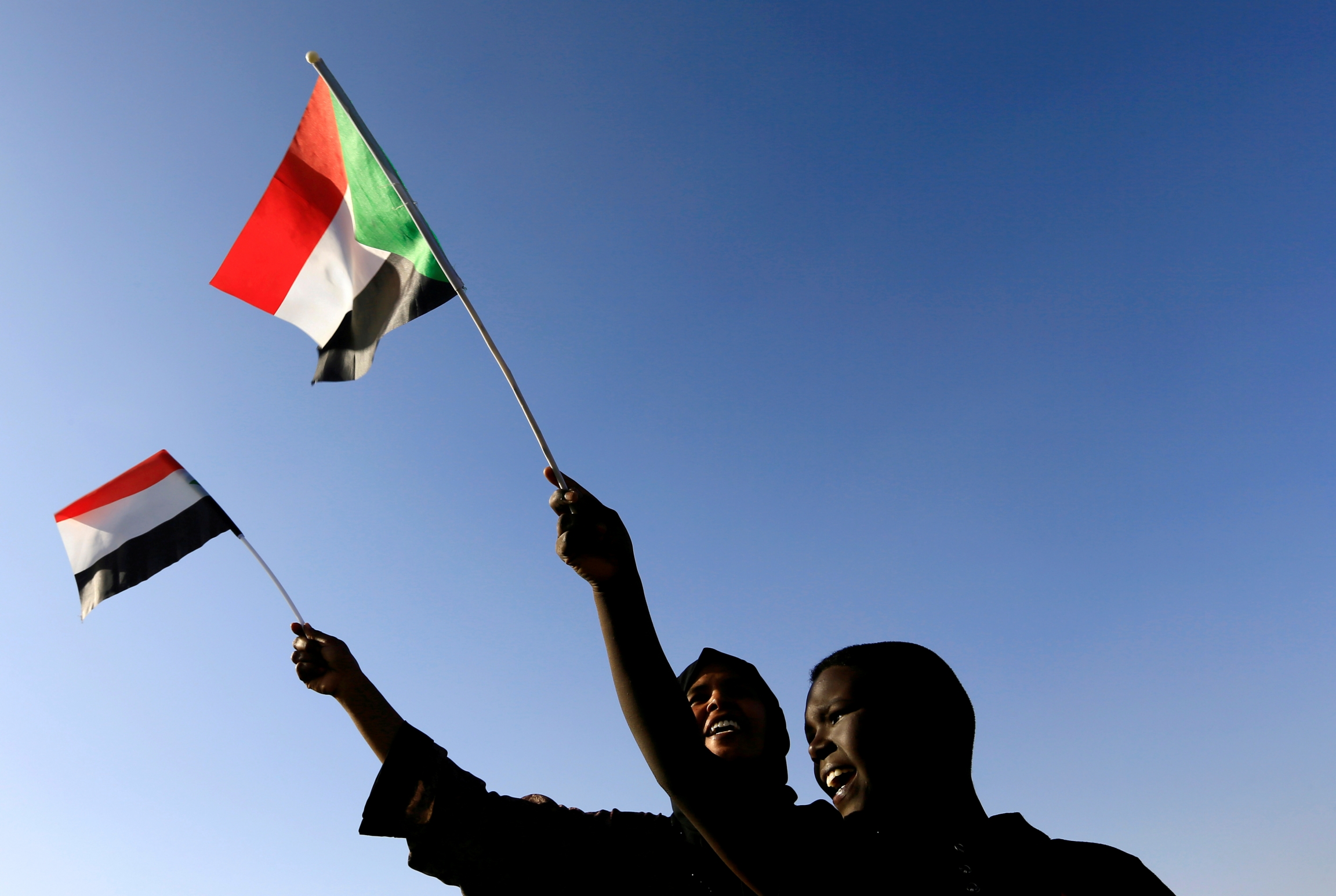 Sudanese civilians wave their national flag as they gather at the freedom square during the first anniversary of the start of the uprising that toppled long-time ruler Omar al-Bashir, in Khartoum, Sudan, Dec. 19, 2019.

Sudan’s government had cut subsidies on wheat and fuel, frustrating students and young professionals fed up with an economy crippled by years of corruption and mismanagement.

Samahir ElMubarak was working in the city as a pharmacist when the protests began.

“I used to struggle to find my mother’s medication,” ElMubarak said. “There are many times that if you could afford it, it was not available. You had to find other means to find it abroad.”

ElMubarak knew she was luckier than the average Sudanese. “They would suffer from the lack of medications. From the shortages that we experienced on a regular level.”

As the protests swelled in Khartoum, ElMubarak became a spokeswoman for the Sudanese Professionals Association, a coalition of professional organizations and trade unions that coordinated the demonstrations for months.

As a member of the Central Pharmacist Committee, she helped coordinate medicine distribution and treatment for the hundreds of thousands of people who would occupy the streets in the blazing heat. The brutal crackdown by security forces meant medical supplies were needed to treat wounds from tear gas and bullets.

Despite the violence, the protests were the first time ElMubarak felt the potential of what Sudan could be.

“There were a lot of things that were amazing that were happening during the protests. ... The sit-in itself was like the land of dreams. Everything was possible. You see a problem, you want to fix it.”

“There were a lot of things that were amazing that were happening during the protests,” ElMubarak said. “The sit-in itself was like the land of dreams. Everything was possible. You see a problem, you want to fix it.”

The dreams and aspirations of a better Sudan have echoed from the streets of Khartoum to cities around the world. The country’s new civilian Prime Minister, Abdalla Hamdok, is the face of this hope. Hamdok was chosen by a transitional government to lead the country in its political transition to democracy with the goal of holding elections in 2022.

But the hopeful political transition is weighed down by a stark reality: The economy, which sparked the protests that led to Bashir’s ousting, is still in crisis.

In a recent visit to Washington, DC, Prime Minister Hamdok said he had inherited a debt of $60 billion. Years of corruption, mismanagement, and graft had ruined the economy. But the real “elephant in the room,” he said, was US sanctions. 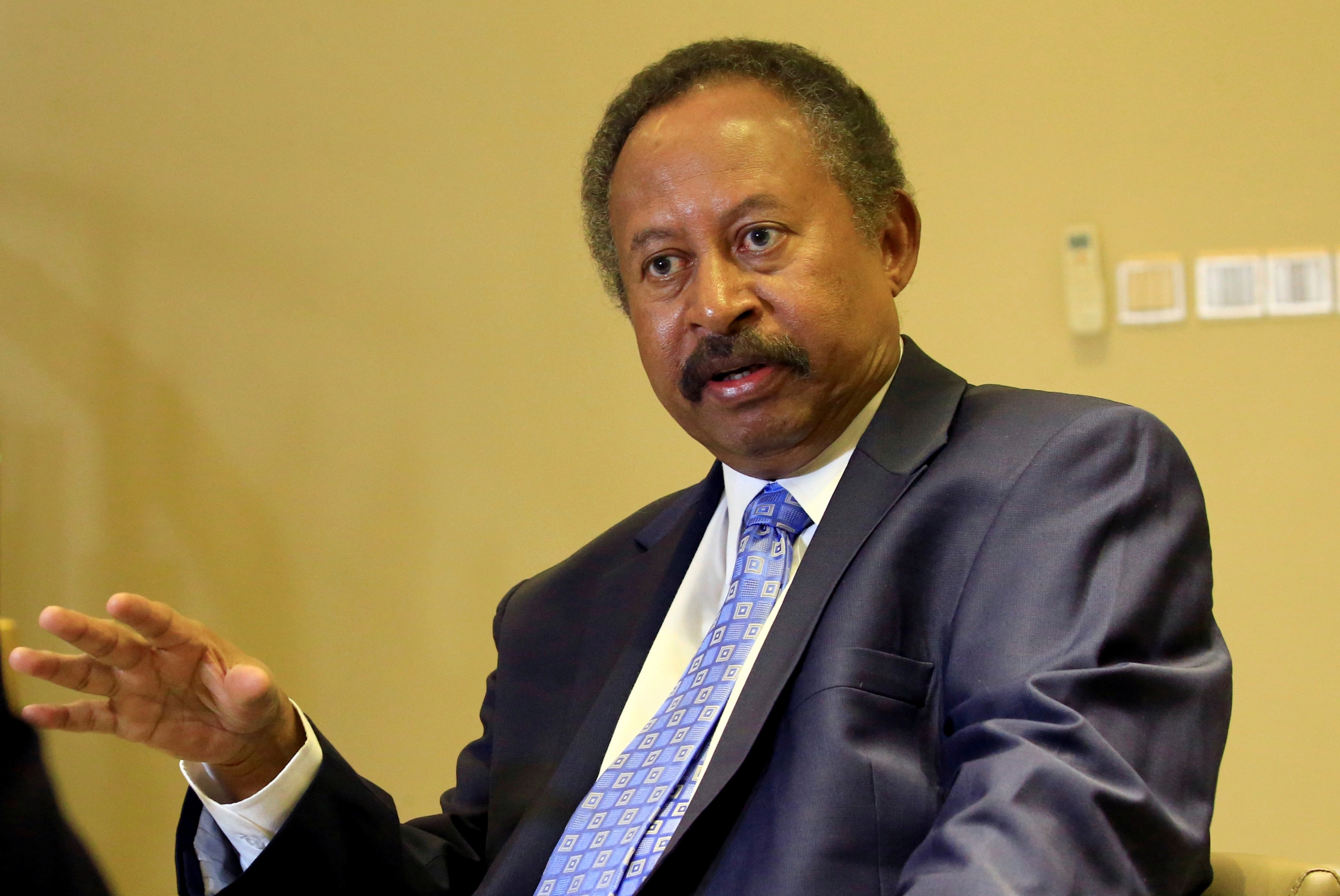 For decades, Sudan has been hit with one set of sanctions after another. They began in 1993 when the US State Department listed the country as a ‘‘state sponsor of terrorism,” or SST.  The listing brought a host of financial and export sanctions, but the real intention was to “isolate Sudan from the community of civilized nations,” as State Department spokesman Michael McCurry said when announcing the new designation.

Since then, Sudan has been virtually cut off from the international banking system and opportunities for debt relief are limited.

“US sanctions have choked off Sudan from private investments except from the most risky investors,” said Cameron Hudson, a senior fellow at The Atlantic Council and former director of African Affairs at the National Security Council under Bush. “There’s no question that US sanctions have had a large impact on the economy.”

The effective isolation of Sudan’s economy has been inherited by the new government which is eager to warm relations with the rest of the world.

Earlier this month, US Secretary of State Mike Pompeo announced the US and Sudan would exchange ambassadors for the first time in 23 years.

Last week, a coalition of nations and global institutions called “Friends of Sudan,” met in Khartoum to recommit their support for a civilian-led government. Some countries have asked the US to remove Sudan from the SST to open the country to investment and debt relief. The hope is that an improved economy will help give Hamdok the resources he needs to oversee Sudan’s transition.

But the US has been unclear about if and when that might happen.

“There's a lot of skepticism, I think, in Washington, still about the strength and the durability of the civilian government,” Hudson said. “And they are going to want some confidence that this government or any civilian government is going to outlive the transitional period so that they don’t have regrets at the end of the this from taking them off the list and find out that the military comes back in to rule the country and takes off where they left off at the end of the Bashir regime.”

A civilian-led Sovereign Council heads Sudan’s government but also shares power with the military, which has been accused of committing human rights atrocities under Bashir’s regime.

“The responsibility on Prime Minister Hamdok’s shoulders is as large as the aspirations of the Sudanese people who suffered decades of serious human rights violations, and crimes under international law,” said Seif Magango, Amnesty International's deputy director for East Africa, the Horn and the Great Lakes, in a statement. There are currently five outstanding ICC warrants against Bashir.

While the US hasn’t given a clear indication if and when Sudan would be removed from the list, it has also signaled that Sudan should resolve some outstanding issues from the former regime. At the top of the list is paying the victims of SST.

In 2014, US District Court ordered Sudan to pay approximately $10.2 billion in compensation and $4.3 billion in punitive damages for the role it played in financing the 1998 bombings on US embassies in Kenya and Tanzania. The terror attacks killed more than 200 people and injured thousands more.

But so far, victims have only received compensation from a fund set up by Congress for victims of terror attacks.

“Companies that violate the sanctioned regimes are paying, but the country of Sudan has not paid one penny yet. ... To come off the terrorism list, they have to step up and I think negotiate directly with the people they injured.”

“Companies that violate the sanctioned regimes are paying, but the country of Sudan has not paid one penny yet,” said William Wheeler, an attorney who represents more than 500 victims in the case. “To come off the terrorism list, they have to step up and I think negotiate directly with the people they injured.”

A US appeals court has since ruled that Sudan does not owe punitive damages, and the issue will be taken up by the Supreme Court next year.

“Congress might decide to take them off the terrorism list, but not until they have made good on what the prime minister [Hamdok] said: that they wanted to make right in the world and join the world of civilized nations,” Wheeler said.

According to reports, Prime Minister Hamdok discussed the compensation claims during his most recent trip to Washington. But Wheeler has yet to hear from the Sudanese government. 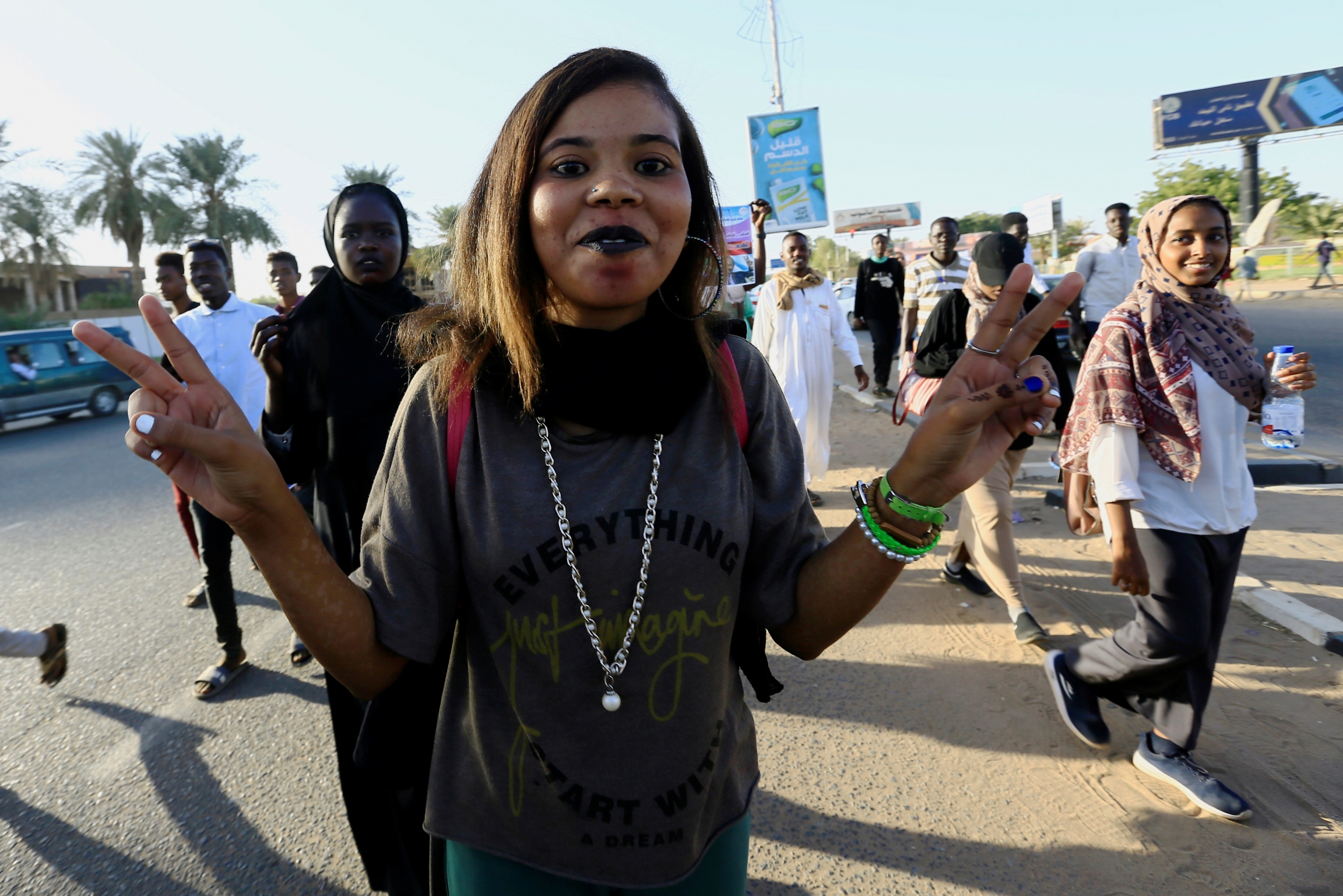 A Sudanese woman flashes a victory sign as people gather during the first anniversary of the start of the uprising that toppled long-time ruler Omar al-Bashir, in Khartoum, Sudan, Dec. 19, 2019.

For the people of Sudan who brought about a revolution, these are the crimes of the old regime that they toppled after months of protests and cost the lives of hundreds of people.

“We as the Sudanese people have been affected by the sanctions more than any government officials,” ElMubarak said. “That’s directly reflected in medications, and the type of medications that are available.”

According to ElMubarak, the Central Pharmacists Committee plans to launch an advocacy campaign next month to lobby for some sanctions relief on the country’s pharmaceutical industry.

“These sanctions were target[ed] at the corrupt government of Bashir, at the government that was sponsoring terror organizations,” she said. “I think it’s high time that the Sudanese not be punished for the deeds that we have not committed.”