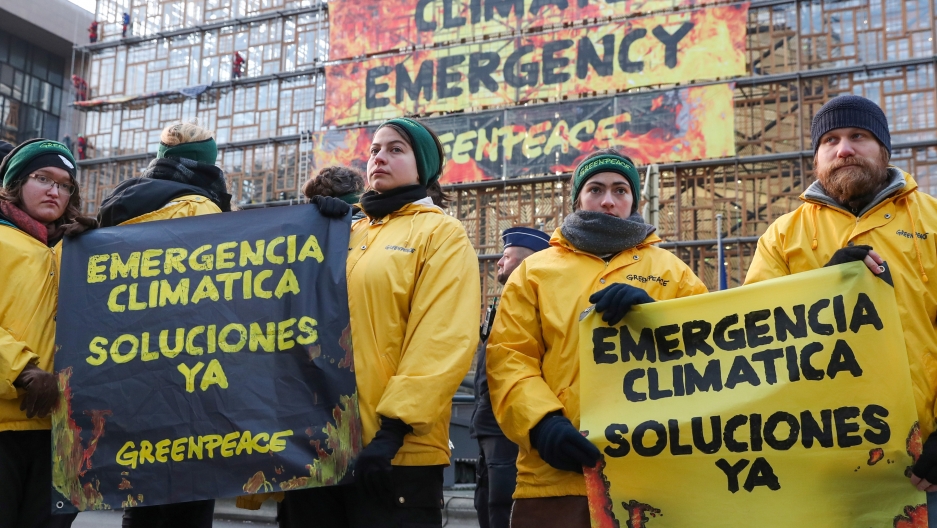 Climate change activists from Greenpeace hold banners as they protest outside the EU Council headquarters, ahead of an EU leaders summit in Brussels, Belgium, Dec. 12, 2019.

The halls of the giant conference center in Madrid hosting this year’s United Nations climate talks are normally filled with delegates in blazers, speed-walking to the next event on green finance or ocean science.

But on Wednesday, activists with noisemakers and banners took over the area outside the conference’s main hall to vent their frustration with the negotiations.

Never seen an action like this at UN talks

Youth are furious and they’re not going away

They demanded more meaningful action on climate change — especially from the wealthy nations responsible for most of the world's carbon emissions.

“We are gathered today to demand that rich countries step up and pay up!” activists shouted. Some 200 were forced out of the venue by security.

BREAKING: Youth, indigenous, & civil society activists are holding a sit in at the main #COP25 hall to protest their silencing & lack of inclusion of human rights in the negotiations.

The Wednesday demonstration came just hours after youth activists with the group Fridays for Future occupied the conference’s main stage to protest slow progress on climate change. And on Friday, demonstrations continued as activists held a sit-in in one of the conference's event halls.

Jennifer Morgan, the head of Greenpeace International, spoke for many climate advocates when she told delegates that the international process is failing to meet the challenge of the moment.

Scientists have released a series of reports stressing the importance of keeping global temperatures from rising more than 1.5 degrees Celsius. To meet that goal, the UN found that emissions would have to fall more than 7% a year for the next decade.

But carbon emissions are still rising and none of the countries most responsible for that — including the US — have promised new cuts. Activists say that’s unacceptable.

Longtime negotiators say this slow slog is just how the process works. Jonathan Pershing is a former US climate envoy and lead negotiator who has been coming to UN climate meetings for 30 years.

“I think there are two things to think about,” Pershing said. “The first is the legitimacy of the complaint, which I think is really appropriate.”

Pershing said it’s true that most nations have not put forward new commitments to cut greenhouse gases. But, he said, that's not what this meeting is for. Under the Paris climate agreement, the deadline for countries to submit new targets isn't until next year.

“So in some sense, the activism [is] a little bit misplaced," he said. "Where it really has to go is to capitals. It’s got to go back into national policymaking. It’s got to shape the debate within countries, so when they come here, they can do something.”

Under the Paris agreement, it’s up to individual governments to set new targets — and then implement the policies required to meet them. Pershing said for all their flaws, the international climate negotiations have produced major results.

“While at any given moment it may not appear to move, over the years through which it’s done its work, it has fundamentally altered the course of the global economy,” Pershing said.

Meanwhile, inside the closed meeting rooms, delegates obsessed over single words as they raced toward a Friday, Dec. 13 deadline to complete the talks.

Related: 4 things to watch at the climate talks in Madrid

There are two major issues still on the table this year.

One is carbon markets — the perennial problem child of climate talks. Last year, negotiations on carbon markets sent the conference into overtime, and delegates finally postponed a decision to this year. Negotiators say that could happen again and advocates argue it would be a better outcome than agreeing to flawed rules.

“What’s important, first of all, is to make sure carbon markets are not going to destroy the Paris agreement."

“What’s important, first of all, is to make sure carbon markets are not going to destroy the Paris agreement,” said Gilles Dufrasne, a policy officer at the Brussels-based think tank Carbon Market Watch.

But advocates say lax rules could do the opposite, and produce cuts that exist only on paper.

One issue is the so-called “double-counting.” For instance, say Brazil reduces deforestation in the Amazon and then sells carbon credits based on that to Germany. In the negotiations, Brazil is pushing for rules that would allow it to still count those emissions reductions itself.

Dufrasne and other advocates say that’s a non-starter.

Another issue under discussion is how to help countries deal with unavoidable destruction caused by climate change, a concept called “loss and damage” in conference terminology.

A coalition of developing countries want to create a new fund to help pay for things like relocating communities — and they want wealthy countries to pay for it.

“We are saying, were we to blame, did we create this? No! ... We think that it is the Global North, and their emissions historically, that have created this situation for us. So we are saying, the right thing to do is to take responsibility.”

“We are saying, were we to blame, did we create this? No!” said Vidya Dinker, with the Indian Social Action Forum. “We think that it is the Global North, and their emissions historically, that have created this situation for us. So we are saying, the right thing to do is to take responsibility.”

But developed countries,  especially the US, have blocked that proposal. Negotiators say one potential compromise would be to explore other funding mechanisms through a panel of experts.

Dinker says a compromise like that would be one more example that the solutions being discussed within the conference’s negotiating rooms do not match the urgency of the situation outside them.

“We are in an emergency,” Dinker said. “And the people who are worst affected are our communities in the Global South.”

Editor's Note: This piece was updated with more information on Friday's protests.